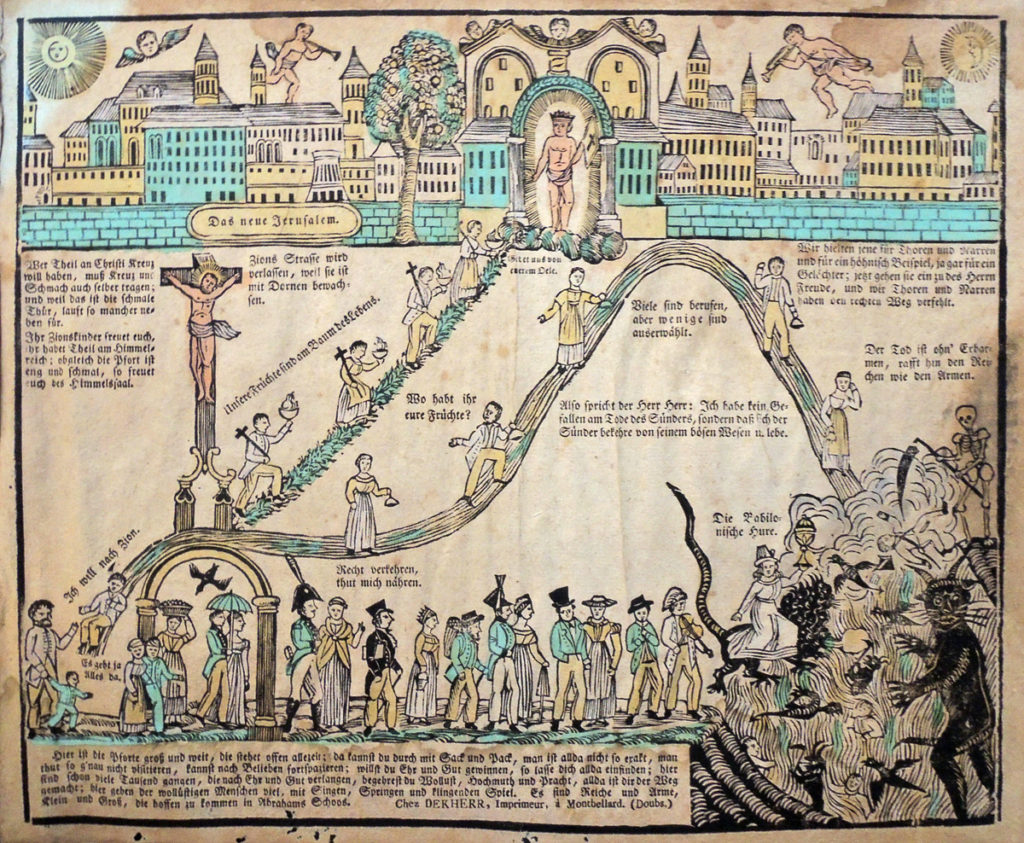 There are many woodcuts and broadsides depicting the roads to heaven and hell. Thanks to Bruce Willsie, Class of 1986, the Graphic Arts Collection is fortunate to have a rather curious variation. It isn’t, as many are, published ca. 1840 by Gustav Peters in Harrisburg, PA or ca. 1830 by Herman William Villee in Lancaster PA, or even the 1825 series printed by François Georgin in the printshop of Jean-Charles Pellerin, Epinal, France.

The woodcut now at Princeton titled Das Neue Jerusalem was published by “Chez Dekherr, Montbeliard, Doubs, France,” the only one found from Alsace so far. As are most of the variations, the text is in German and the devil in the lower right is closer to, but not exactly the same as the one at the Library of Congress [below], dated simply 1800s: 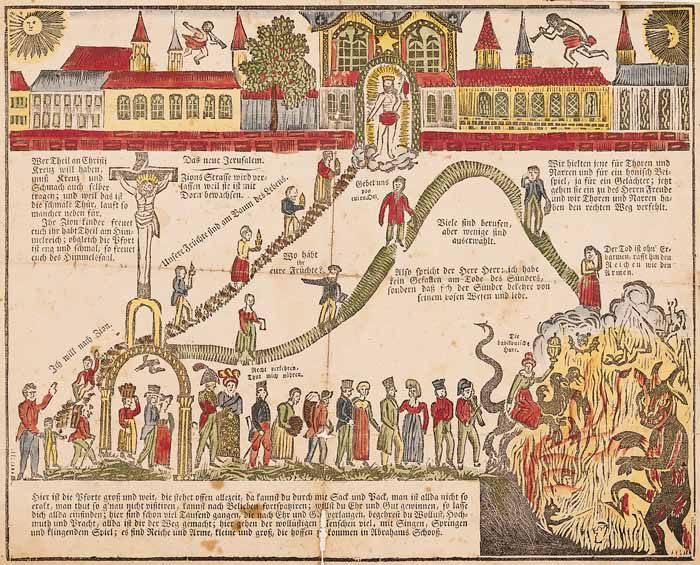 The Library Company of Philadelphia has: 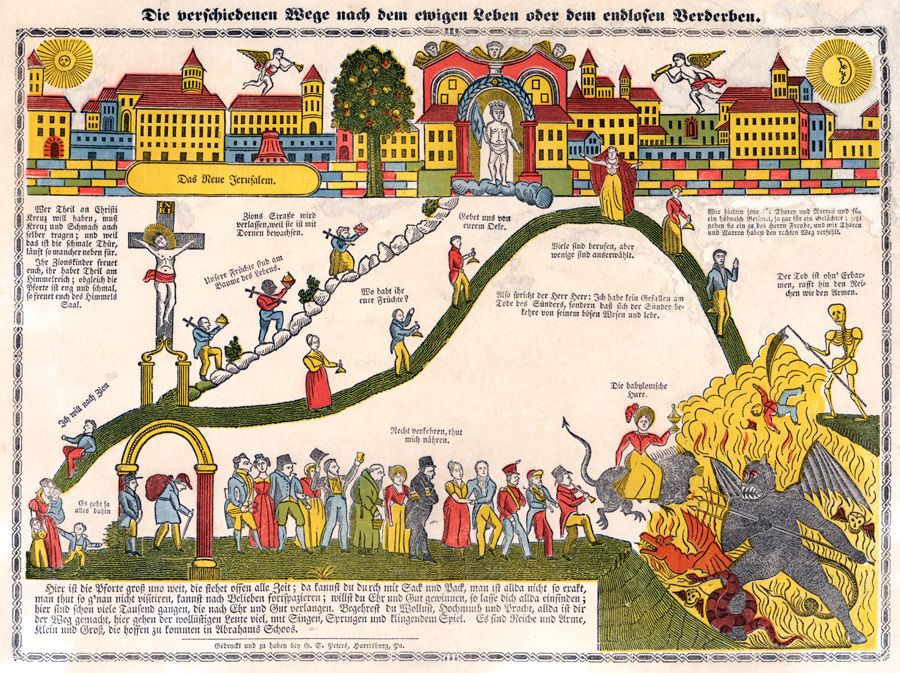 Note these later Pennsylvania Dutch broadsides show only three people walking to heaven, one being African American. They are holding burning lamps while the folks below say “give us some oil” because they have no light. 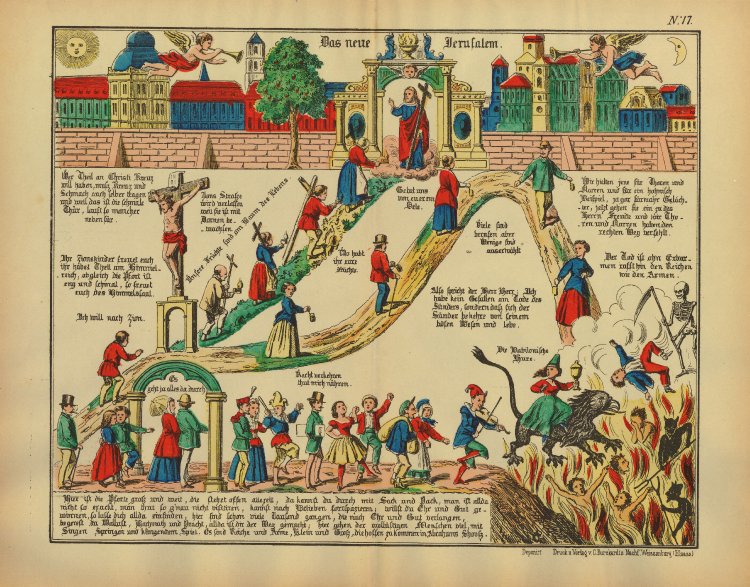 The British Museum [above] has a copy of Das neue Jerusalem (The New Jerusalem) published in Wissembourg and printed by C Burckardt between 1850 and 1870. “No.17. Deponirt / Druck u. Verlag v. C. Burckardt’s Nachf. Weissenburg (Elsass). This version of hell is closer to Cornell University’s The 3 Roads to Eternity (Les 3 Chemins de l’Eternite), which is held in their “Persuasive Maps” collection. [see below] They date it 1825, printed by Francois Georgin, “a popular and accomplished woodcutter in the printshop of Jean-Charles Pellerin, in the Vosges mountain village of Epinal”. For full details on references, see http://persuasivemaps.library.cornell.edu/content/references. 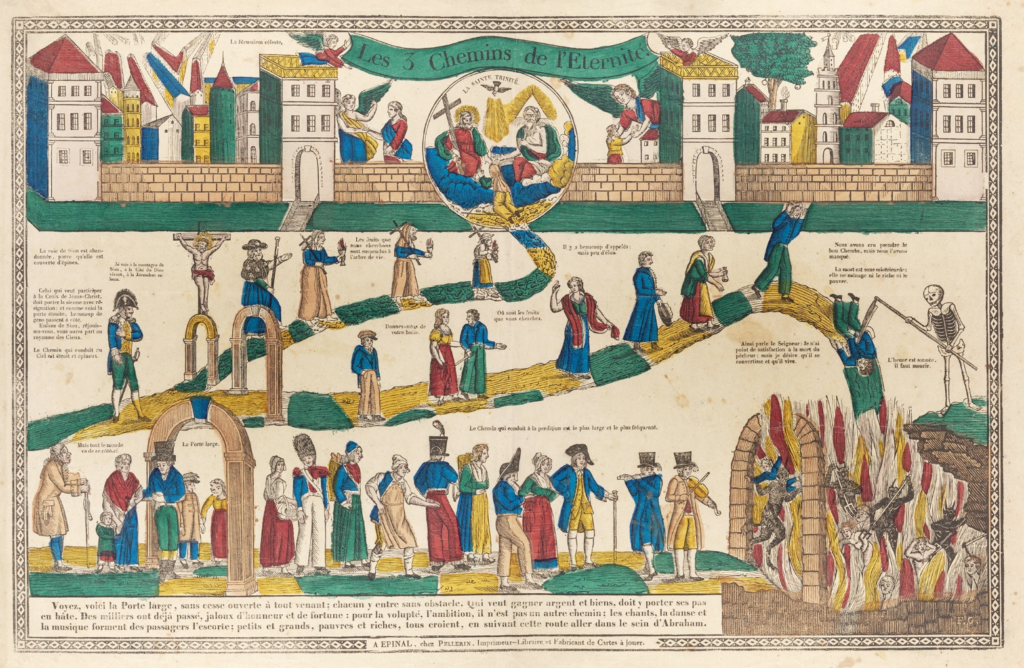 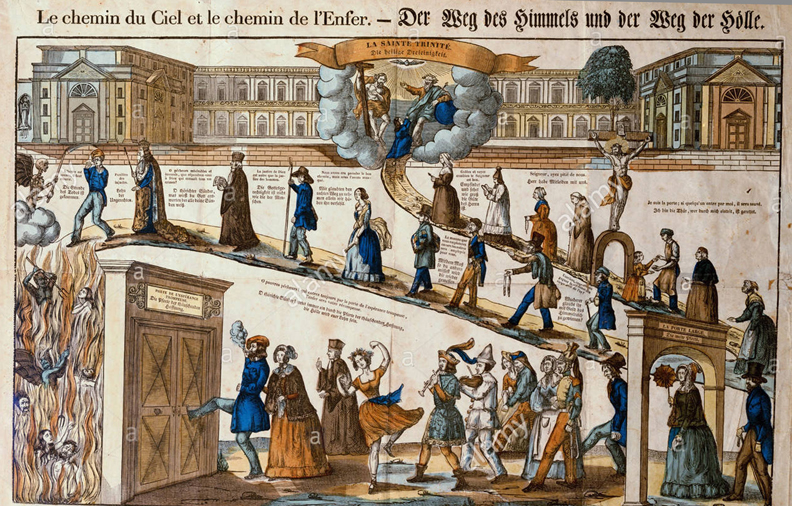 The Heimatmuseum Trostberg has this 1845 Epinal version, with the door to hell oddly closed. 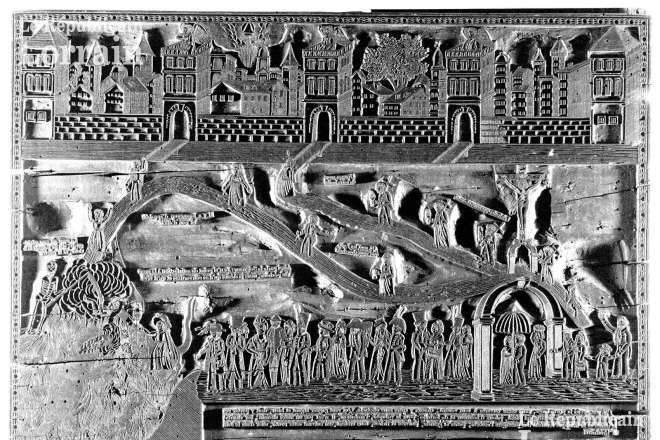 One of the Epinal woodblocks looks ready for printing. 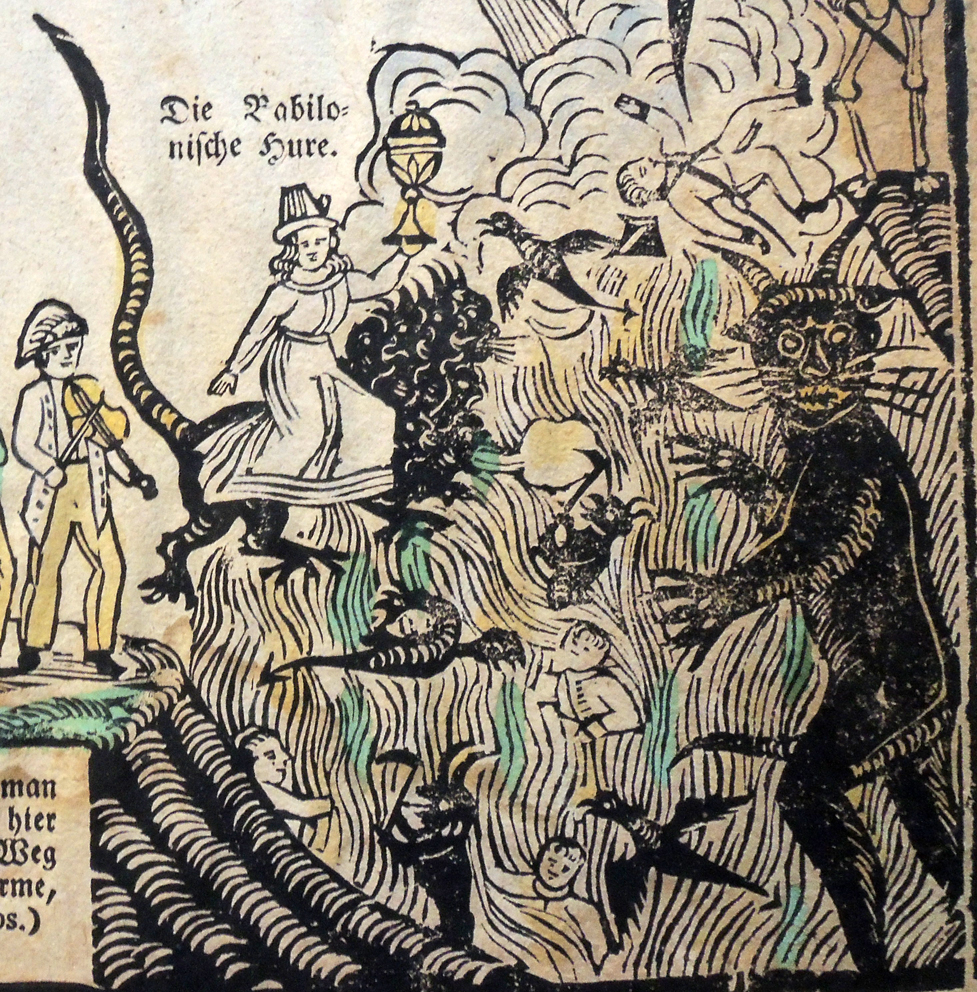 Our devil is the only one who stares directly at the viewer and there are many extra beasts and bodies embedded in Princeton’s copy. Note the dainty Whore of Babylon. 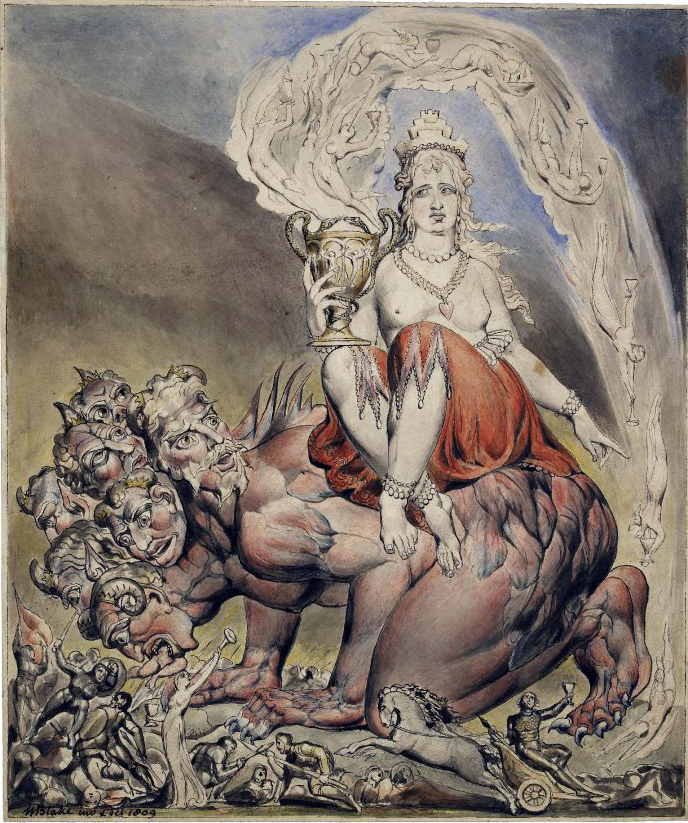 The British Museum has William Blake’s pen and ink and watercolor drawing of The Whore of Babylon also holding a chalice, 1809 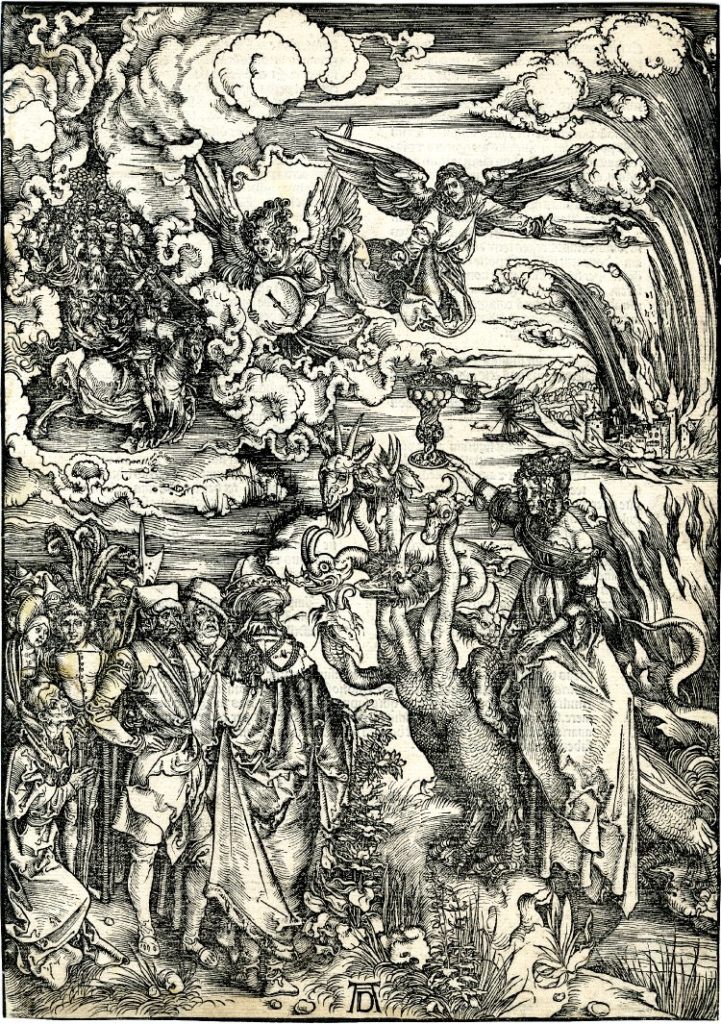 Here is Albrecht Dürer version of the Whore of Babylon, woodcut ca.1496-97. She is in the bottom right, it takes a minute to find her.

Thank you to all the institutions that posted images online, which I have pulled together to compare for educational purposes.