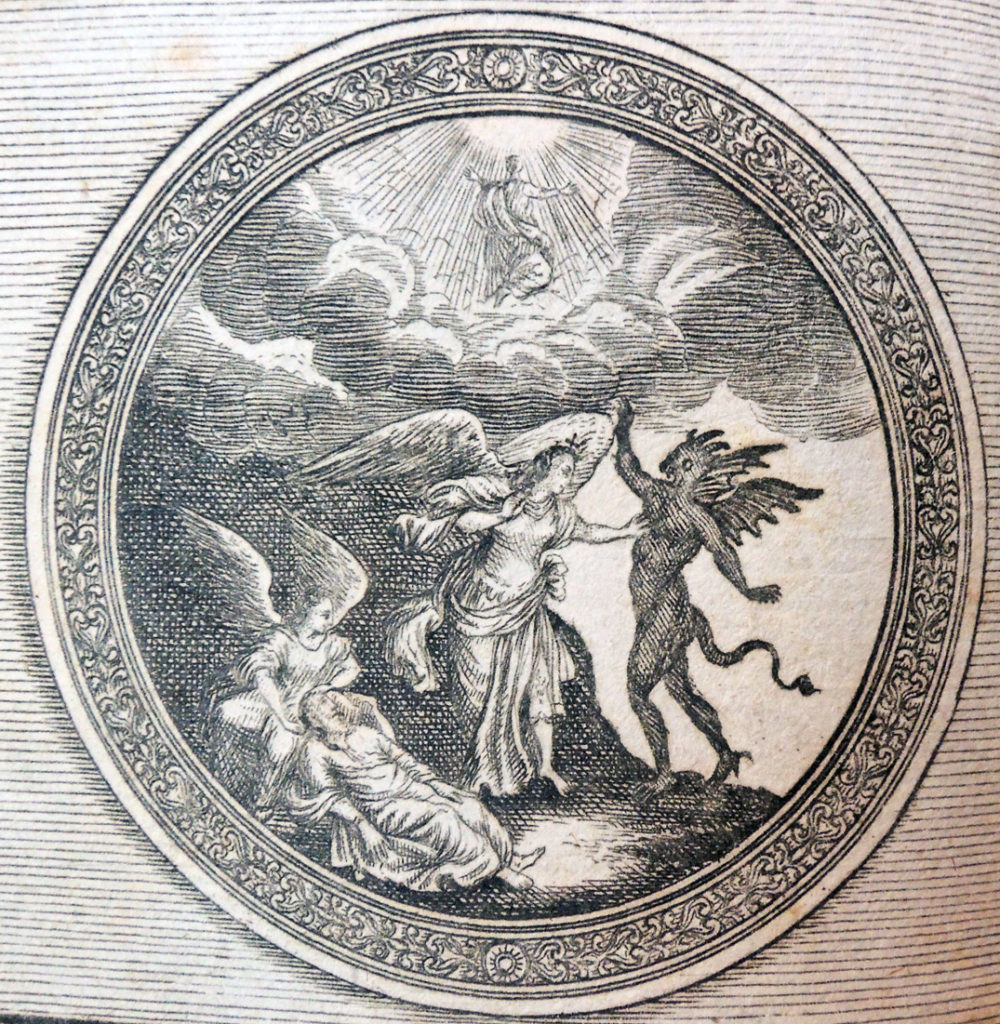 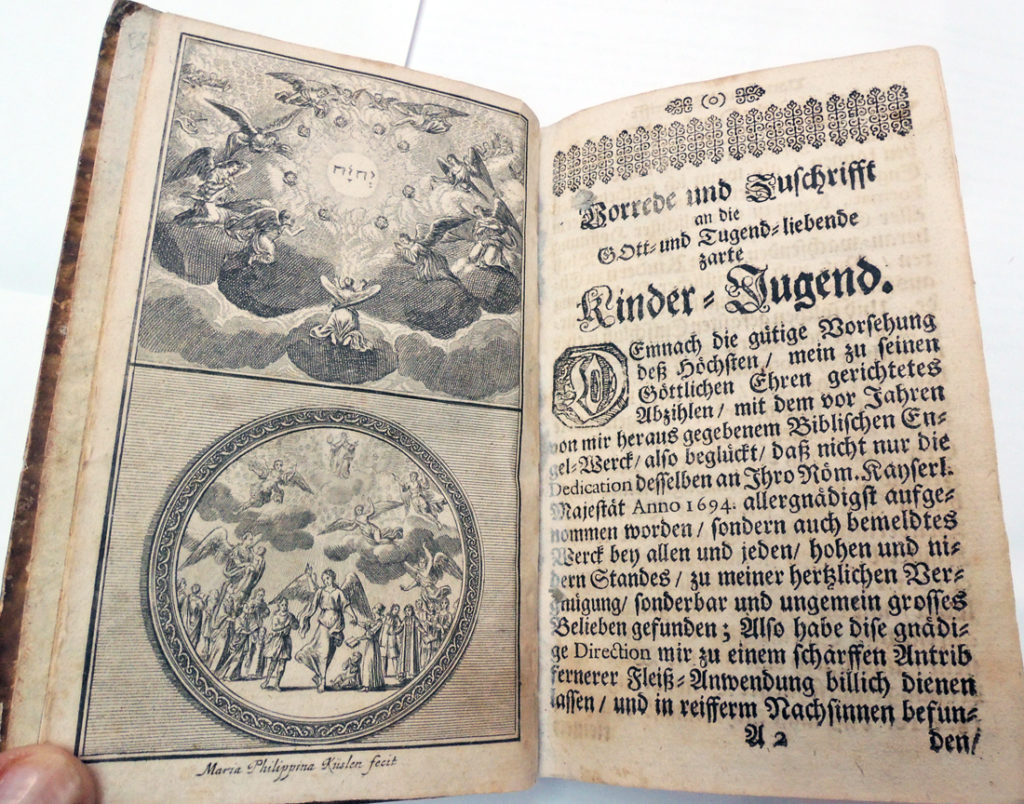 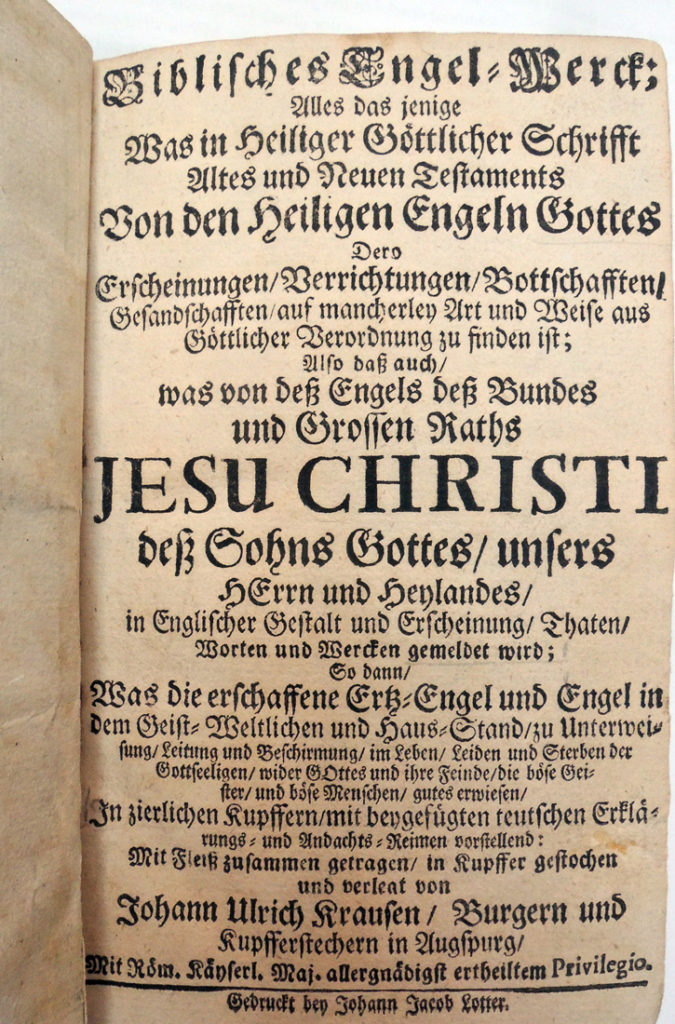 At 15 cm or approximately 6 inches, all the plates have been redrawn and newly engraved for the tiny hands of children. In both editions, the frontispiece and 31 plates were made by Maria Philippina Küsel (born 1676), a member of the celebrated German family of engravers. The daughter of Melchior Küsel I and the niece of Matthäus Küsel, she and her sisters, Maria Magdalene Küsel and Johanna Sibylla Küsel, were admired for their designs and for their technique in copper plate engraving. See volume 20, Hollstein’s German Etchings, Engravings & Woodcuts 1400-1700. Maria Magdalena Küsel to Johann Christoph Laidig (Amsterdam, Van Gendt, 1977). This volume includes Maria Magdalena Küsel (1683-1707), Maria Philippina Küsel (born 1676), Matthäus Küsel (1629-1681), and other family members. 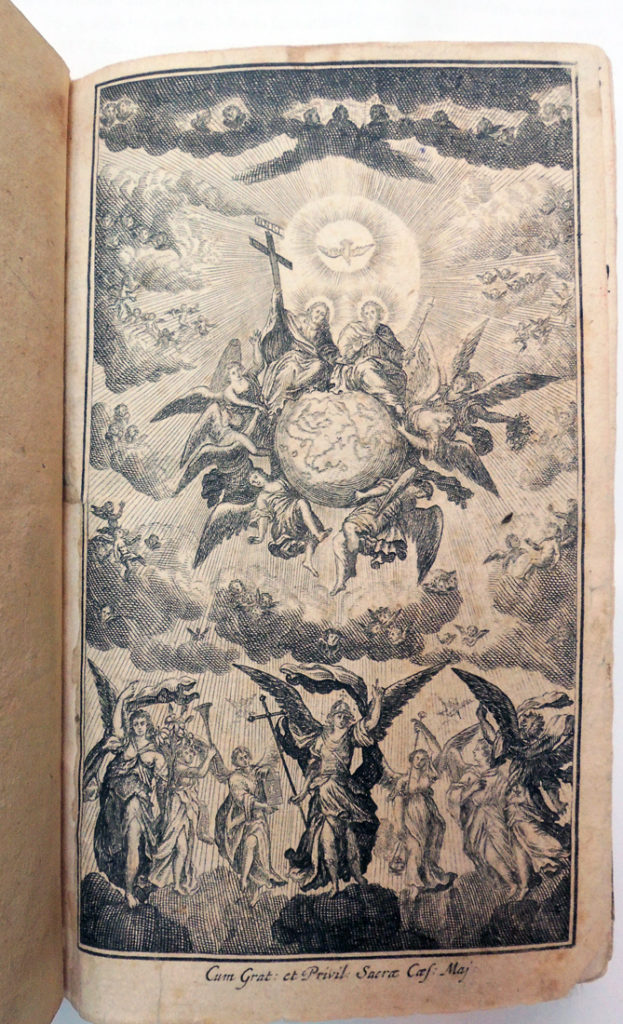 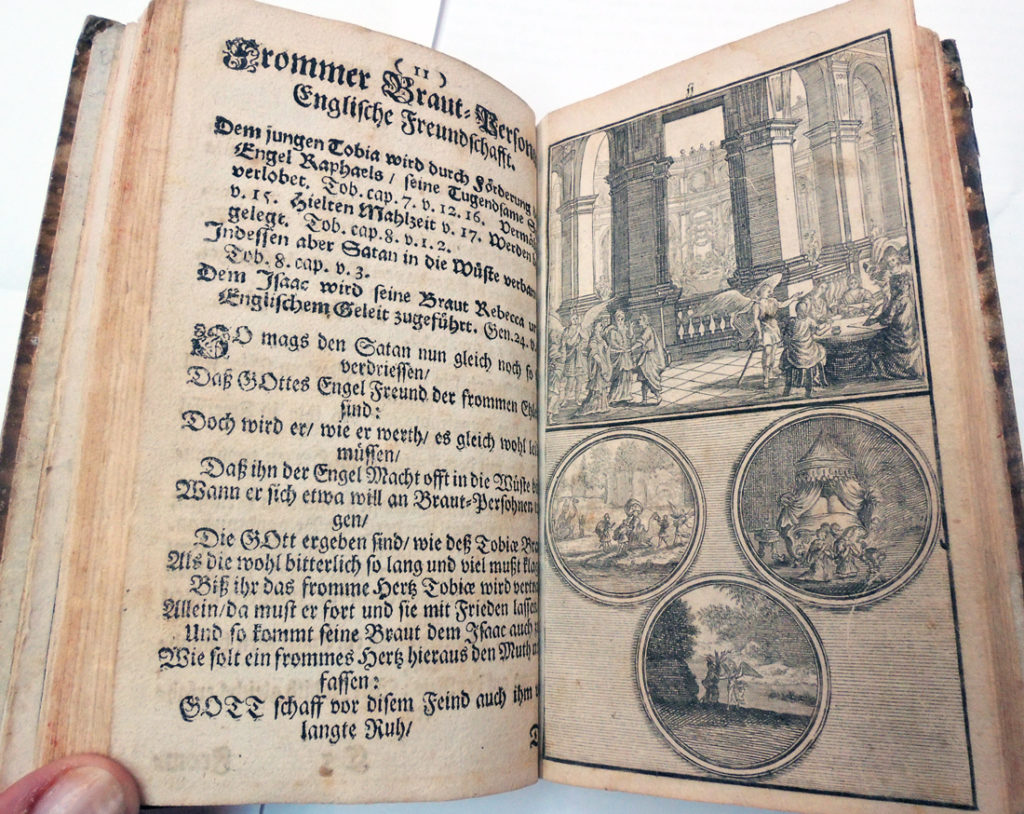 Nina Musinsky has researched this rare volume and writes:

The original Biblisches Engel- u[nd] Kunst Werck, the first of his religious publications, used an innovative visual presentation, which Krauss would follow in his vast Historische Bilder-Bibel (1698-1700): in the uppermost portion of each of the 34 engravings was a large Biblical scene in rectangular format, while the lower half contained a smaller, related scene within ornamental borders. The explanatory caption and 12-line German poem were engraved at the top and between the two parts of the engravings.

In this “baby” edition, the explanatory text for each plate, which reprints the original engraved text, is printed in letterpress on the facing page. The preliminaries are the same, except that this edition replaces the dedication to Kaiser Leopold with a rather humbler dedication to children, a 7-page Vorrede und Zuschrift an die Gott- und Tugend- liebende zarte Kinder-]ugend, in which Krauss declares his desire to plant the seeds of pious habits in children and youth.

Other than the frontispiece, Kusel’s fine engravings modify the plates of the larger edition in various ways. First, they contain no engraved text. Secondly, Kusel’s adaptations of the upper scenes usually eliminate some architectural or background detail, and select salient details to focus on. Most, but not all, are in reverse. In the lower portions are one to five roundels (occasionally overlapping) on unadorned backgrounds, without the elaborate rococo borders of the original plates, the roundels containing an adaptation of the religious scenes shown in the original engraving, once or twice including a new scene not in the original (e.g., plate 10).

Plate wear shows that this edition post-dates the only other known edition of the plates, printed by Johann Christoph Wagner, ca. 1700, for Krauss. This edition is not to be confused with the 1702 edition of the entire Historische Bilder-Bibel, including the Engel- Werck, which contained smaller reversed copies of the original plates, including the engraved text, also by Maria Philippina Kusel and by her sister Johanna Sibylla Krauss. That 1702 edition (of which the Bavarian State Library is digitized) is much larger than this one, the engravings are different, and it includes no letterpress text; nor was it explictly intended for children, as is this one. 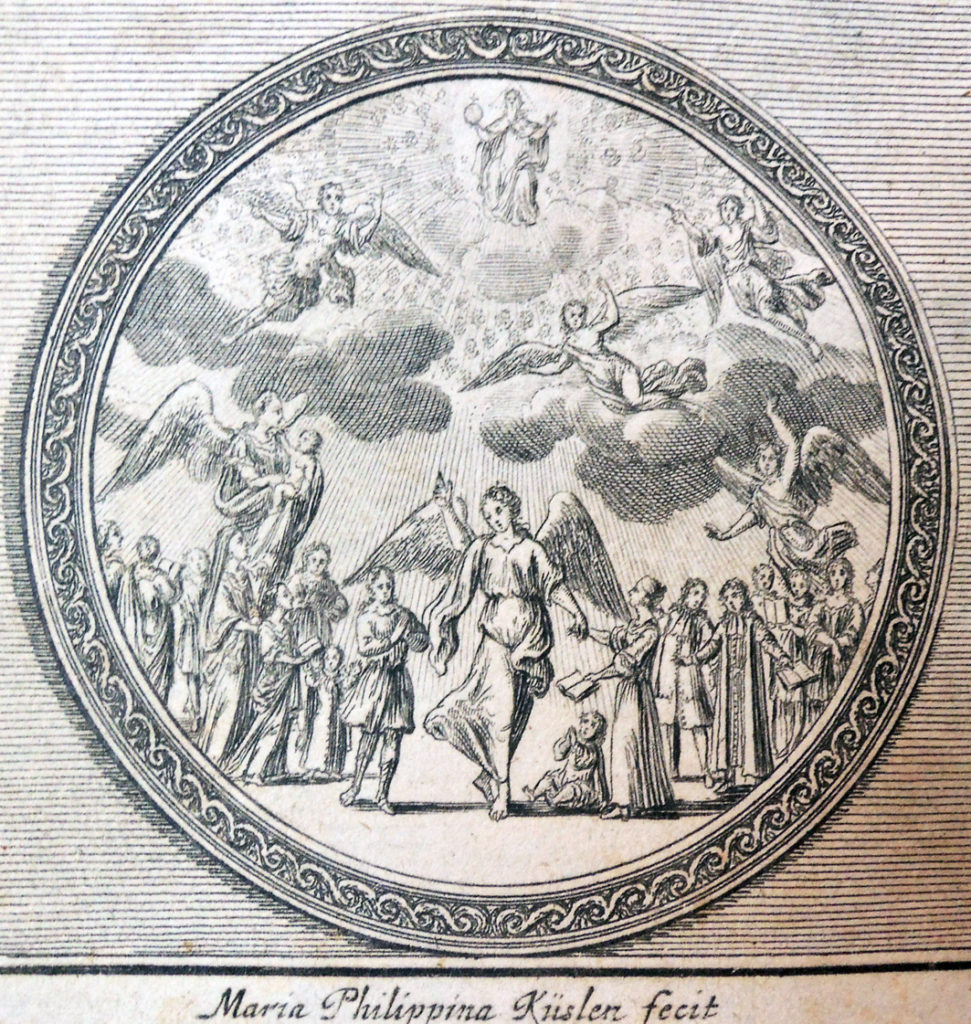