One of the rare items pulled for the Princeton University class “Battle Lab” (HUM 350/ART 302/AMS 352) was a series of preparatory sketches by John Trumbull (1756–1843) for his painting, The Death of General Mercer at the Battle of Princeton, January 3, 1777.

The students were asked where and when did Brigadier General Hugh Mercer (1726-1777) actually die? Answer: Mercer died in the Thomas Clarke House on the eastern end of the battlefield, nine days after the battle ended. 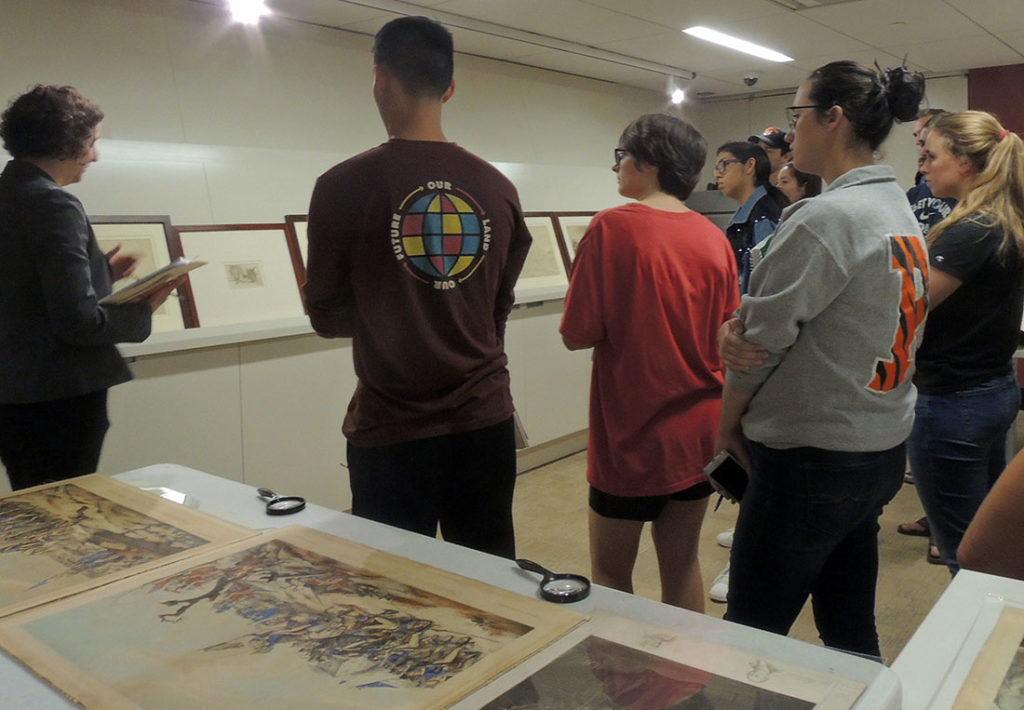 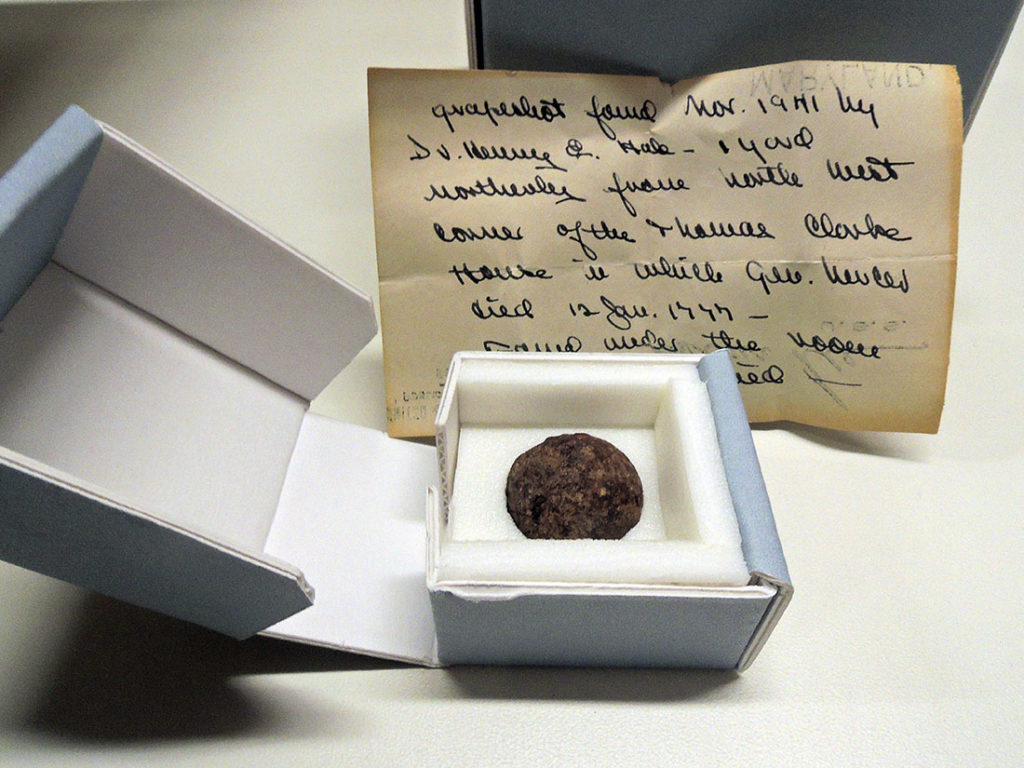 The students examined a cannon ball found in April 1896 near Princeton Battlefield and grapeshot found November 1941 by Dr. Henry E. Hale, one yard northerly from north west corner of the Thomas Clarke House in which Gen. Mercer died 12 Jan. 1777, found under the room in which he died (Gift of Cora A. Margenem).

This framed section of The Apotheosis of George Washington uses an image taken from a 1781 print by Valentine Green after a painting by John Trumbull, and printed on fabric by an English textile designer. Here Washington is driving a chariot drawn by leopards, accompanied by the figure of America in a plumed headdress. This is one part of a larger design that originally also included The Apotheosis of Benjamin Franklin and was used as wall paper, bed linen, and other decorative fabrics.

Students were also shown two swords, one which appears in the Washington textile and the other similar to one in Trumbull’s battle scene. 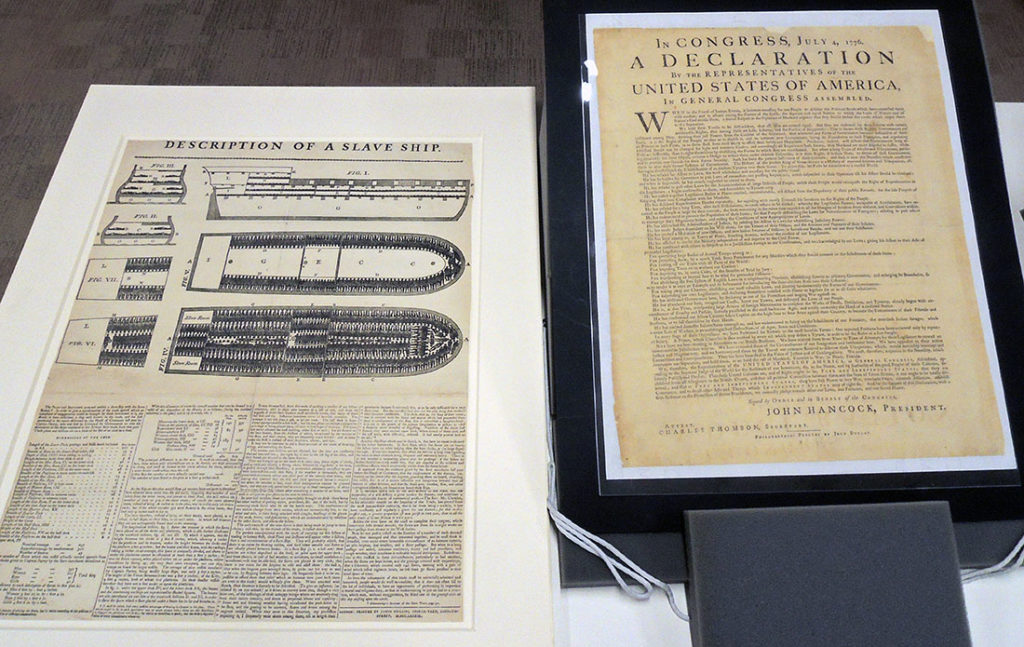 Among the seminal American documents shown was a first printing of the Declaration of Independence, printed by John Dunlap (1747-1812) and “signed by order and in behalf of the Congress, John Hancock, president. Attest. Charles Thomson, secretary.” Acquired December, 1940, William H. Scheide Library.

There are two states noted by Frederick Goff, differing in the placement of the imprint. In the earlier state, the P of Philadelphia is located directly beneath the comma following Thomson’s name. In the later state the P is located directly beneath the n of Thomson’s name. Goff notes also a proof copy (imperfect), held by the Historical Society of Pennsylvania, exhibiting differences in punctuation and in the insertion in line 13 of the word ‘a’ before the word ‘new.’ Cf. Goff, F.R. The John Dunlop broadside: the first printing of the Declaration of Independence, 1976. See also Walsh, M.J. “Contemporary Broadside editions of the Declaration of Independence.” Harvard Library Bulletin 3 (1949): 31-43, 1. 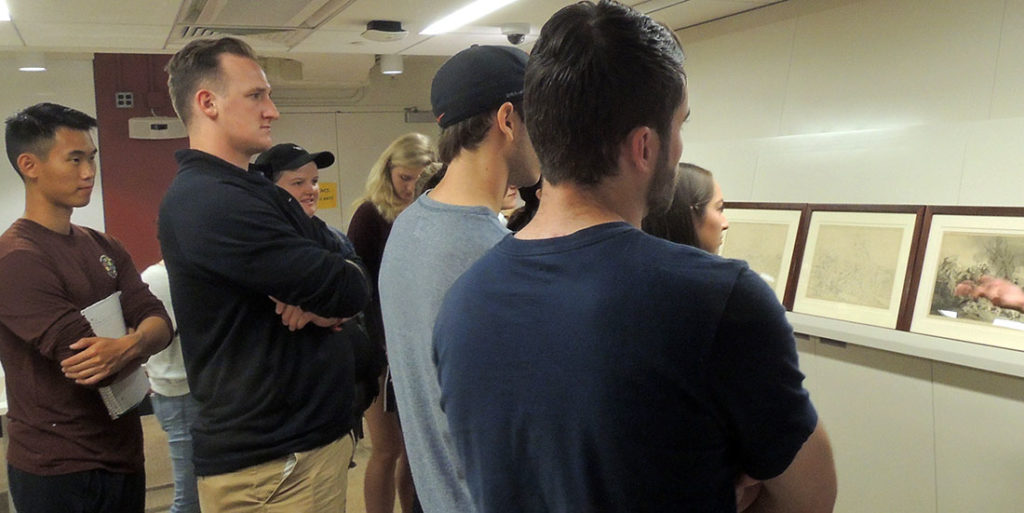 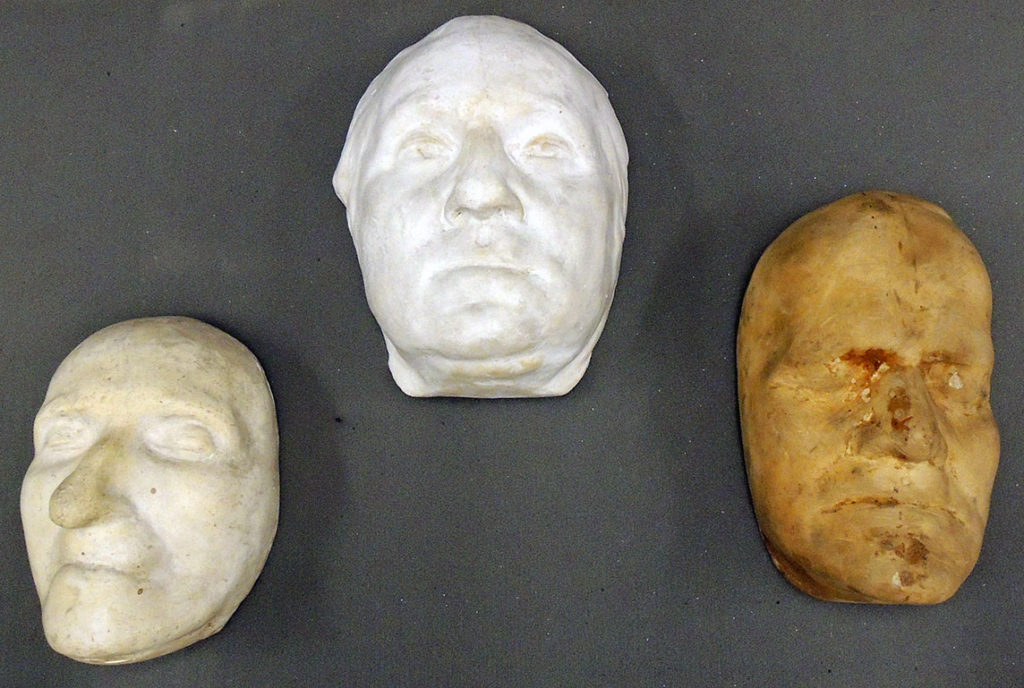 (left) Thomas Paine (1737-1809); (center) George Washington (1732-1799); (right) Benjamin Franklin (1706-1790) from the Laurence Hutton Collection of Life and Death Masks http://library.princeton.edu/libraries/firestone/rbsc/aids/C0770/. Note the sunken faces of Paine and Franklin, whose false teeth had been removed before the mold was taken. 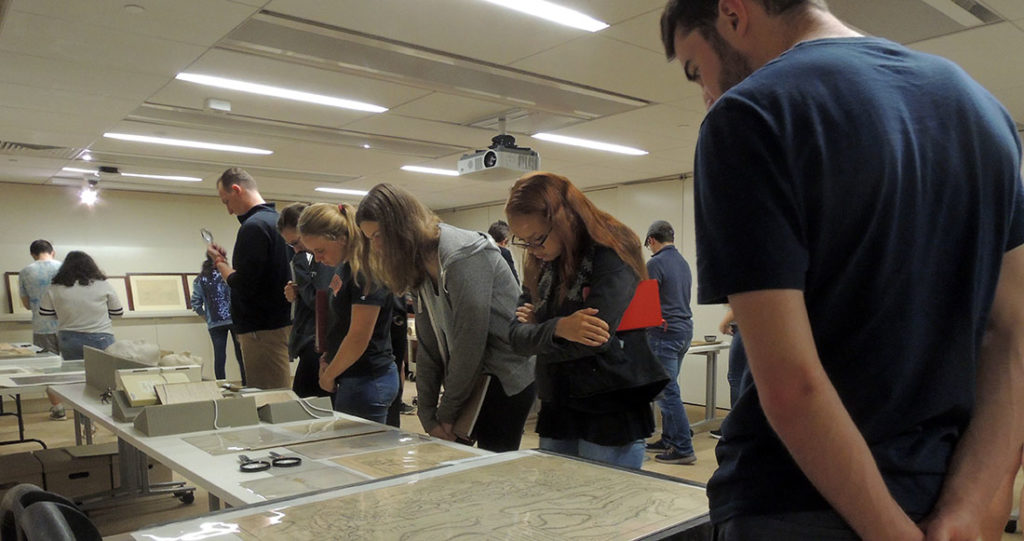 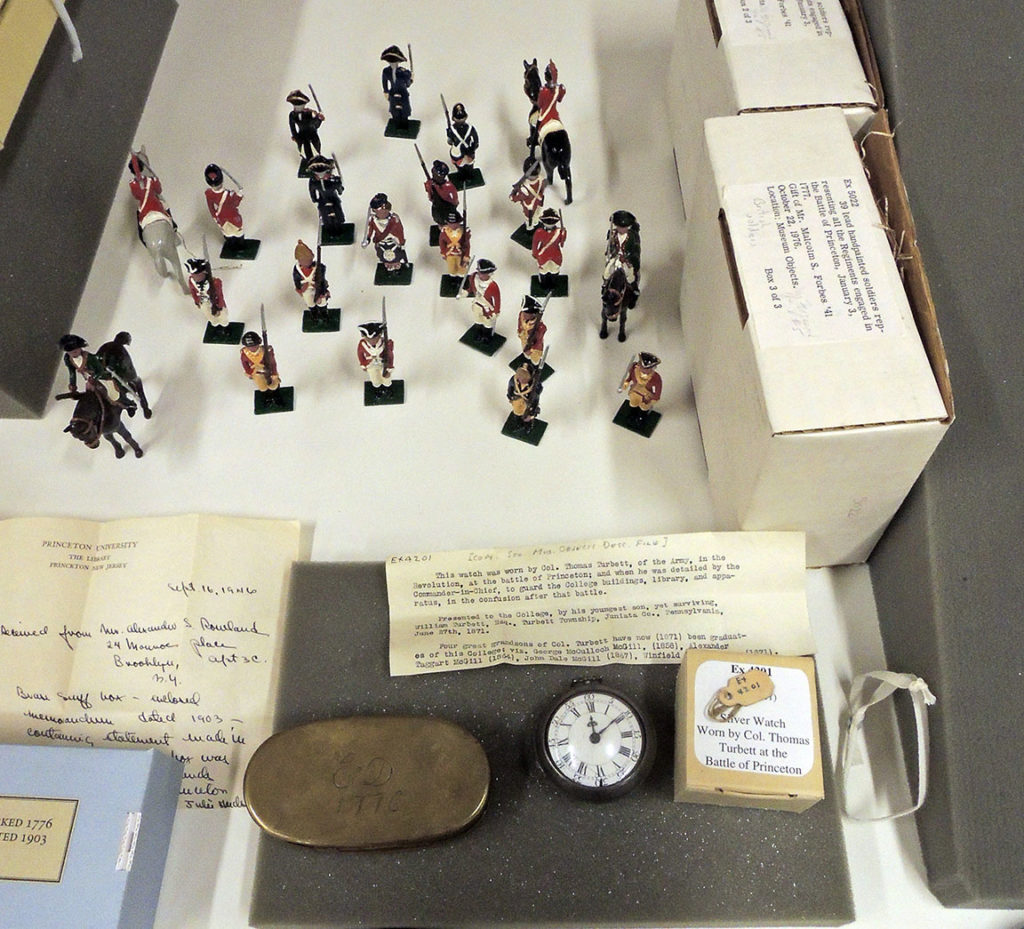 Thanks to the donation of Malcolm S. Forbes, Class of 1941, we have a collection of American Revolutionary War soldiers in the Battles of Trenton and Princeton. The group consists of no.158 of a limited set of models of the officers and men of American, British, and Hessian regiments that fought in the battles of Trenton (December 26, 1776) and Princeton (January 2-3, 1777). These 39 models were made to order for the Princeton Battlefield Area Preservation Society by Blenheim Military Models, Glamorgan, Wales.

A variety of other reliquaries, maps, and engravings were also included in the exciting class. 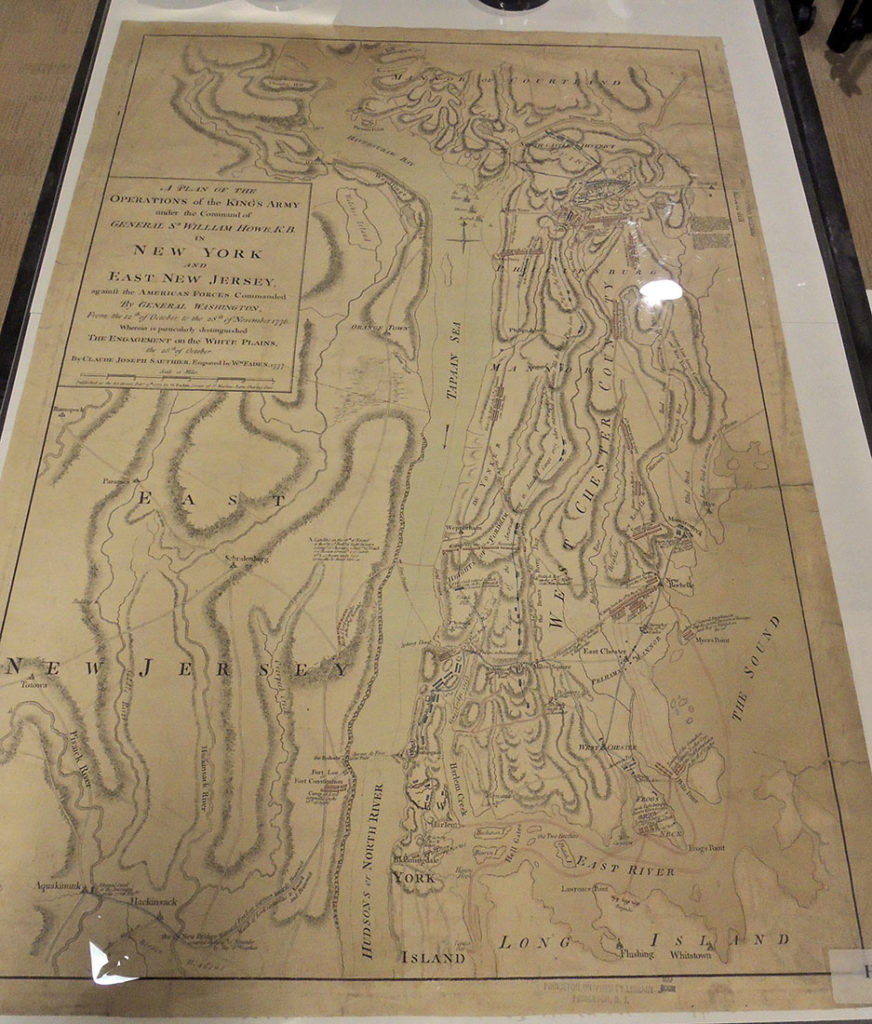