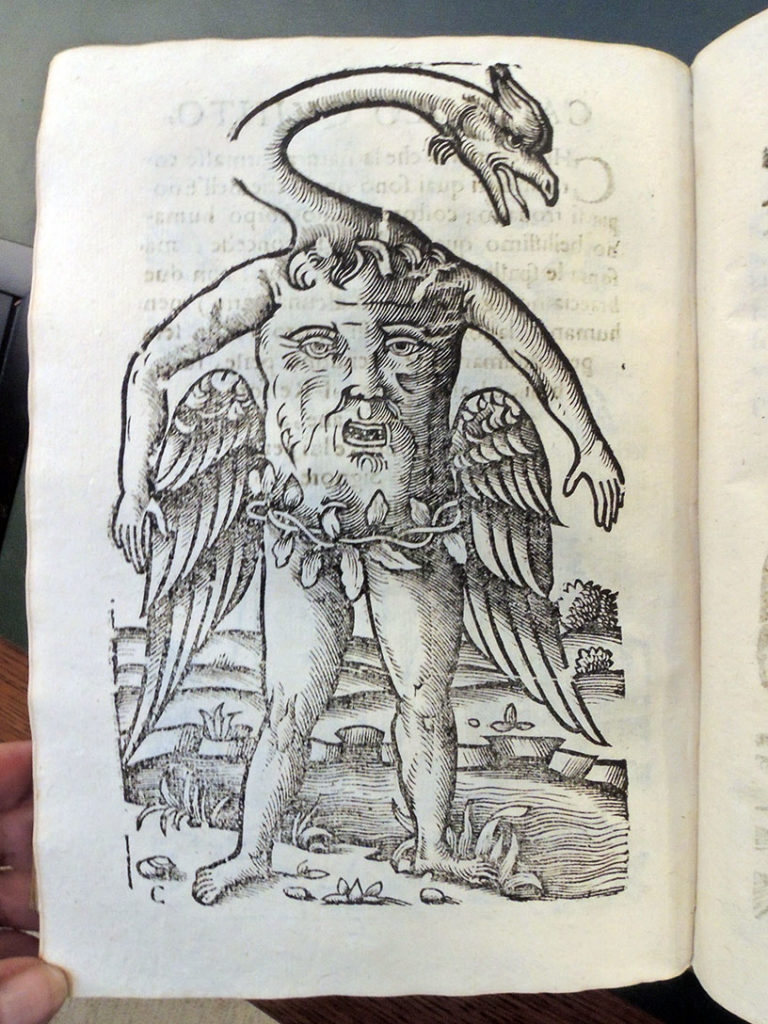 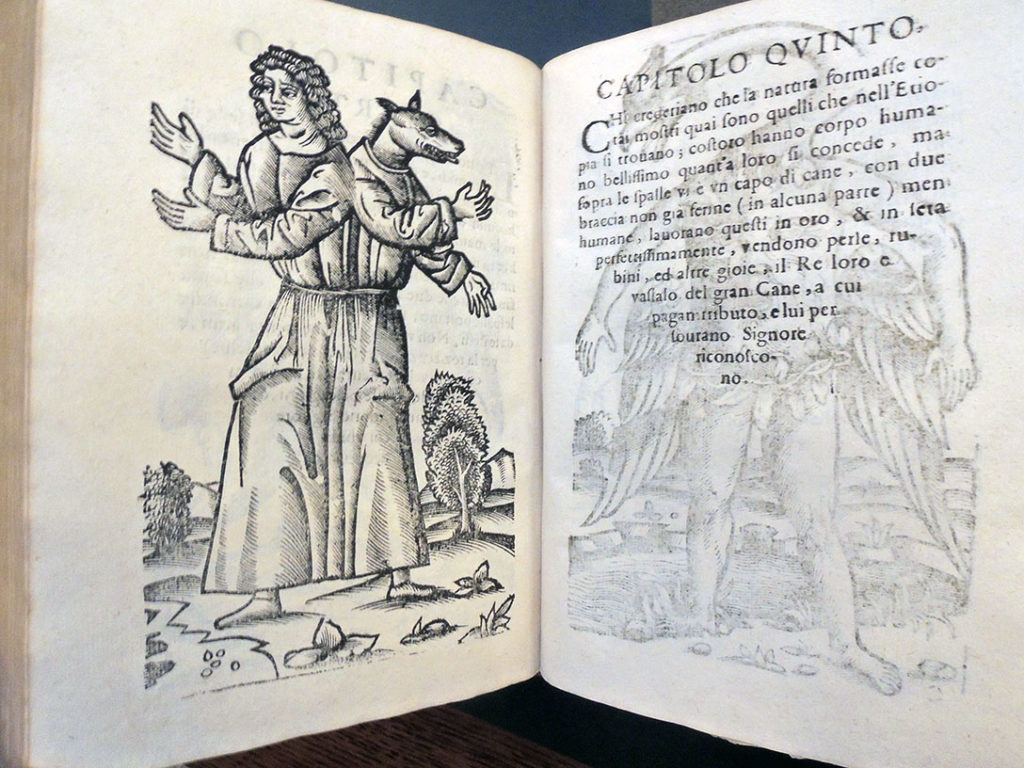 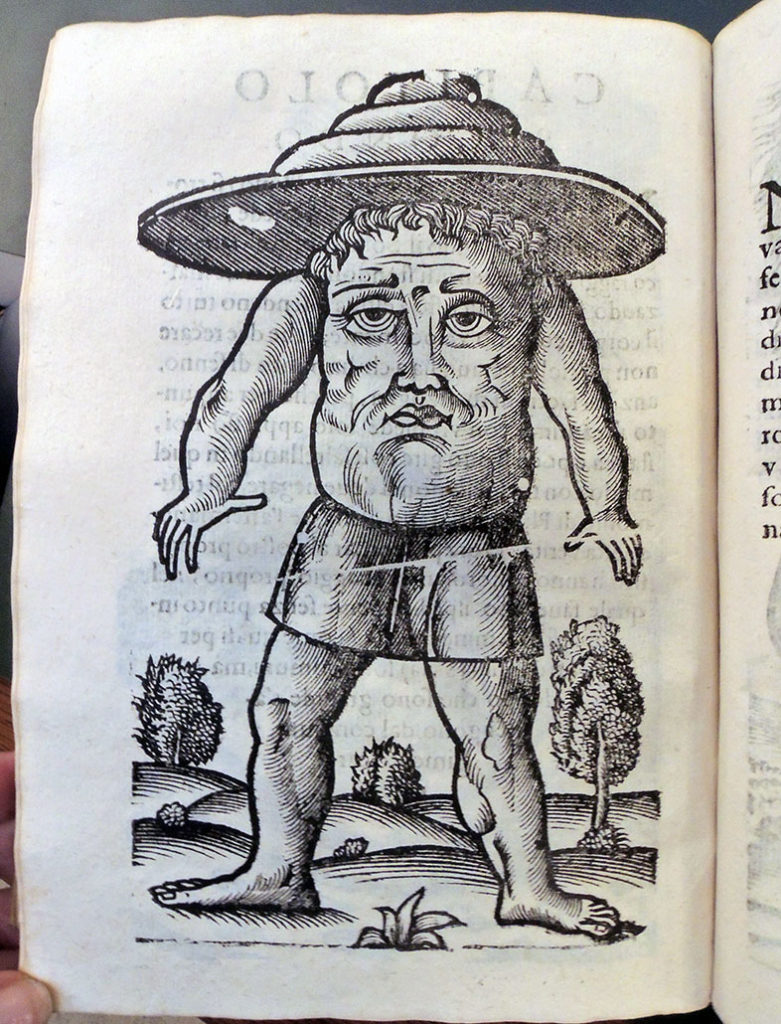 Lengthy essays have been written about Giovanni Botero’s Universal relations but for the Graphic Arts Collection, it is the book’s Aggiunta (supplement) added by publisher Alessandro Vecchi with 33 woodcuts from 32 blocks that must be the primary focus of this rare publication. Vecchi knew the power of pictures.

Now attributed to the Renaissance genius Hans Burgkmair (1473-1531), the 30 full-page and 2 half-page woodcuts fall into two sections: the first group depict semi-human monsters and the remainder represent natives of India, Guinea, and East Africa. Walter Oakeshott’s 1960 study claims this was “the first serious study of native life and dress made for publication in a European travel book.” 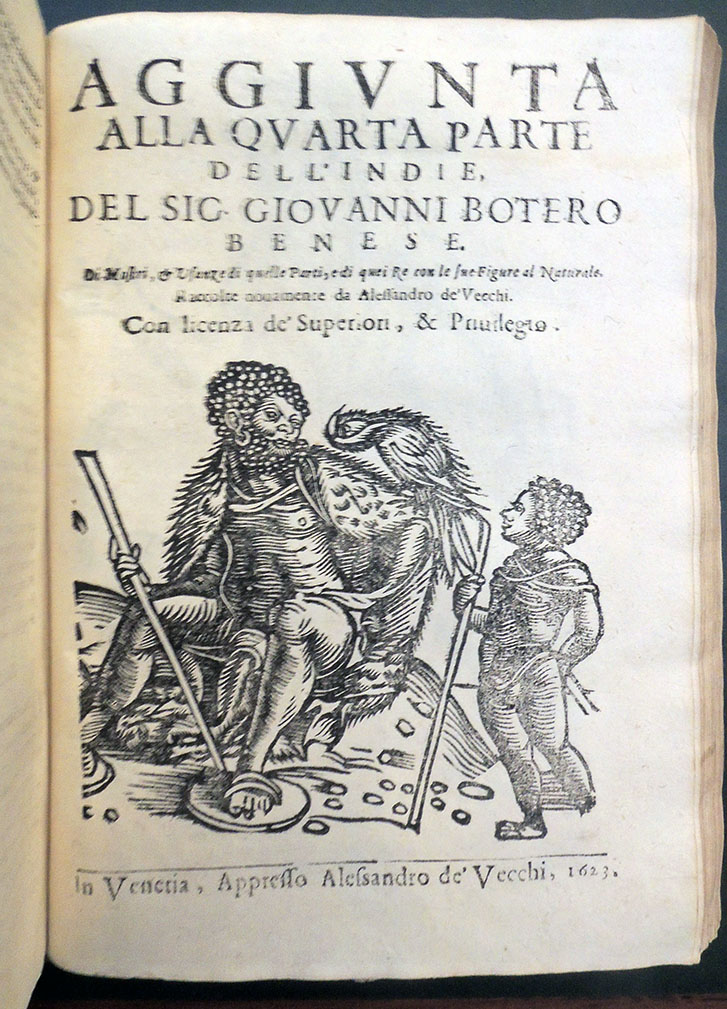 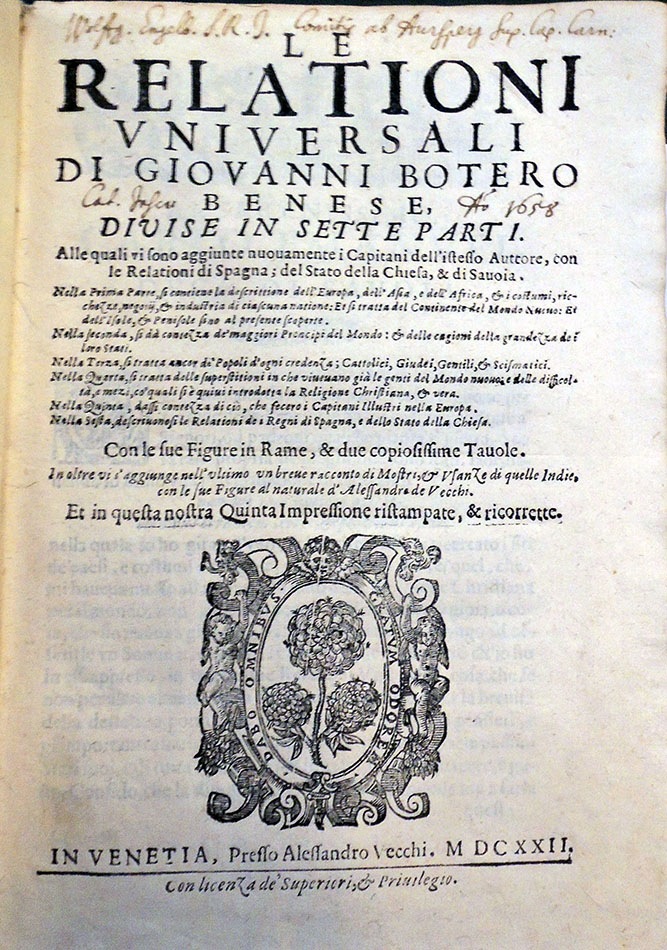 Thanks to funds provided by the estate of Gillett G. Griffin, the copy recently acquired by the Graphic Arts Collection comes from the collection of Count Wolfgang Engelbert von Auersperg (1641-1709). The volume also holds a 19th-century bookplate of the Auersperg princely library in Laybach (Ljubljana), along with a label of Helmut N. Friedlaender. 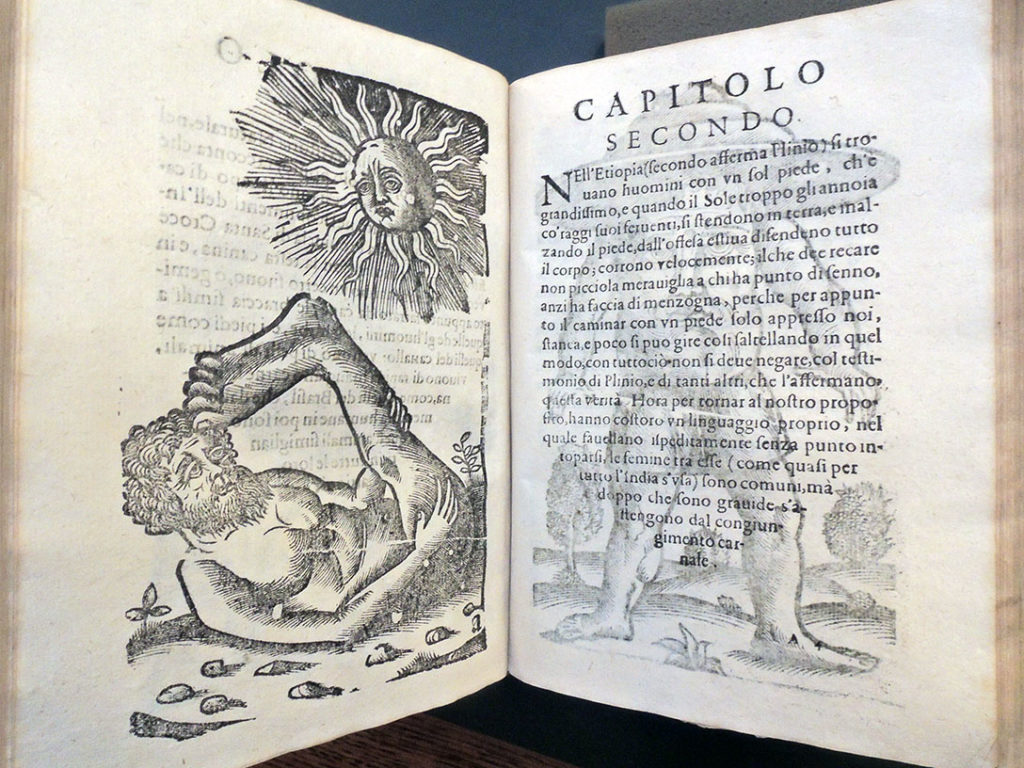 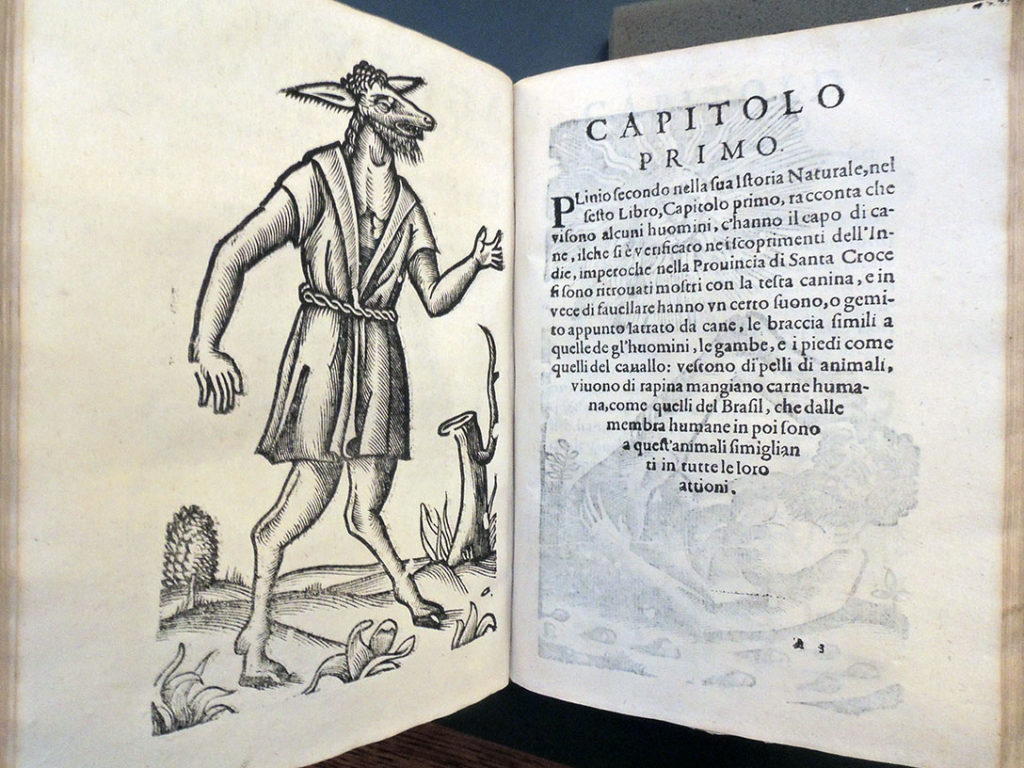 Hans Burgkmair the Elder was the foremost Augsburg designer of woodcuts of his time, and together with Hans Holbein the Elder, the most important painter of the early sixteenth century in the city. The British Museum notes that the artist:

“Trained with his father, the painter Thoman Burgkmair (q.v), and from 1488 to 1490, was apprenticed to Martin Schongauer in Colmar. Designed woodcuts for the leading presses in Augsburg throughout his career. He became a master in 1498, and had a short stay in Italy during 1507. Worked primarily for the emperor Maximilian from c.1508 to 1519, for whom he designed the Genealogy of the Habsburgs of 1509-11, Der Weisskunig of 1514-16, Der Theuerdank of 1517 and the Triumphal Procession of 1516-18. …Between 1508 and 1512, [Burgkmair] played a leading role, together with the printer Jost de Negker, in the development of printing in colour. He was particularly influential in the introduction of Italian Renaissance forms into Augsburg. 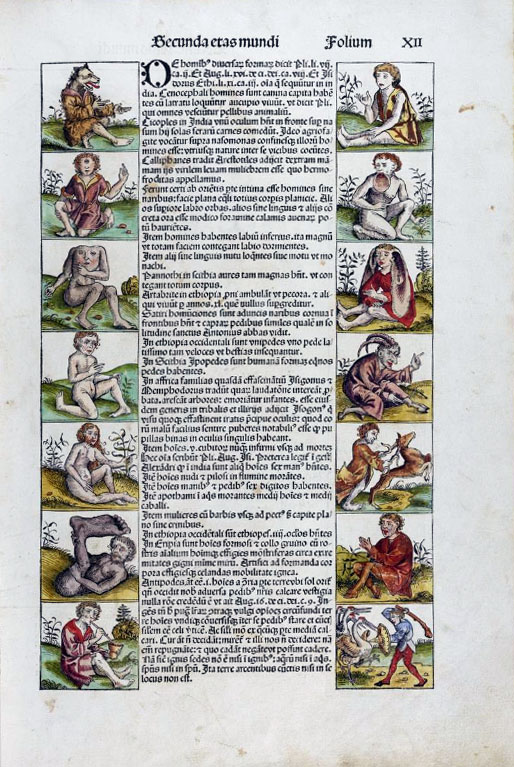 The first of Burgkmair’s 15 woodcuts in the Aggiunta show mythological semi-human monsters, including a centaur, a dog-headed man, and others reminiscent of the border cuts in Schedel’s Nuremberg Chronicle.

The remaining 17 cuts depict real men and women, in attire and appearance exotic to European readers, 8 of which form part of a panorama that was cut up into single vignettes. The British Museum owns a rare portion of this procession of the King of Cochin, noting:

“These three blocks come from a set of eight, which was originally printed in the format of a frieze … and was based on a short report by Balthasar Springer published in 1508 of the first voyage made by German traders in 1505-6 to Africa, Arabia and the East Indies.” 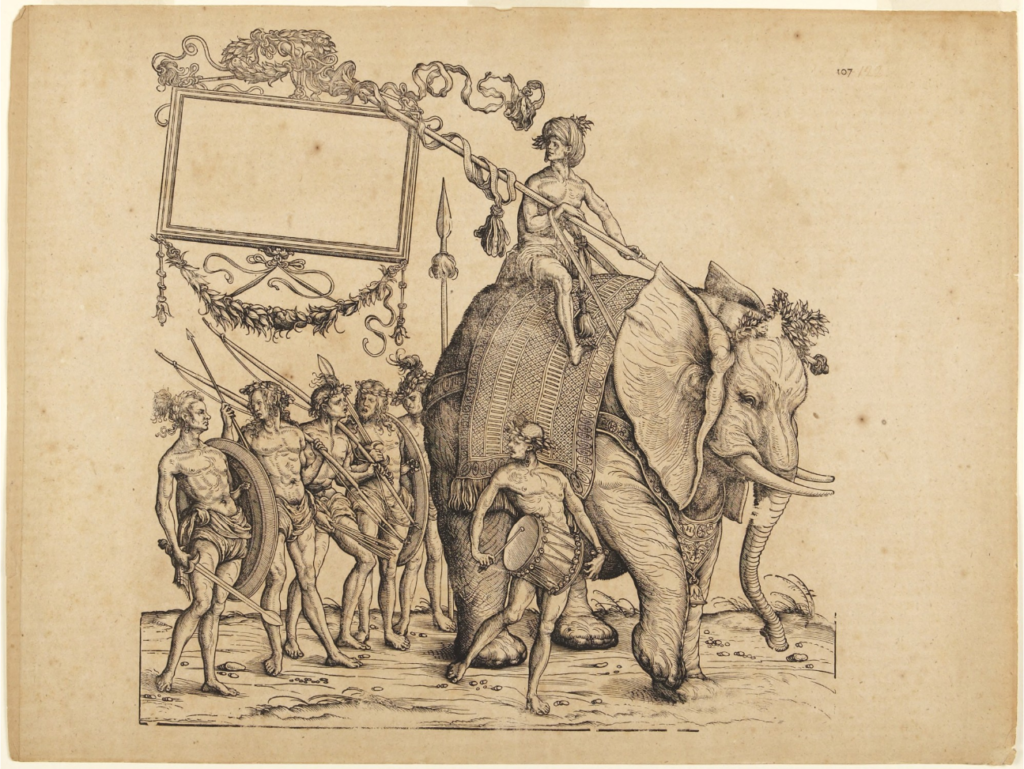 Burgkmair’s original woodcuts must have been known, as they were copied throughout the 16th century, but the blocks themselves were not published until the 1618 edition of Le relationi universali. For the 1622 edition now at Princeton, Vecchi added a title illustration and improved the layout, using a larger type fount. 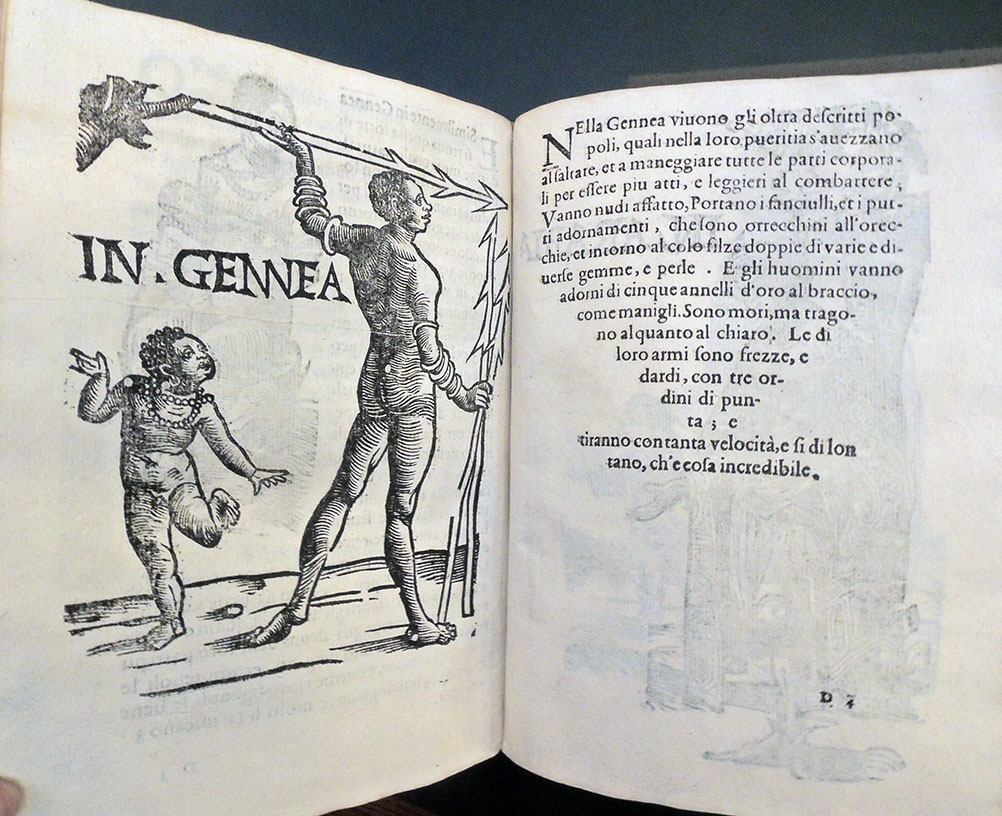 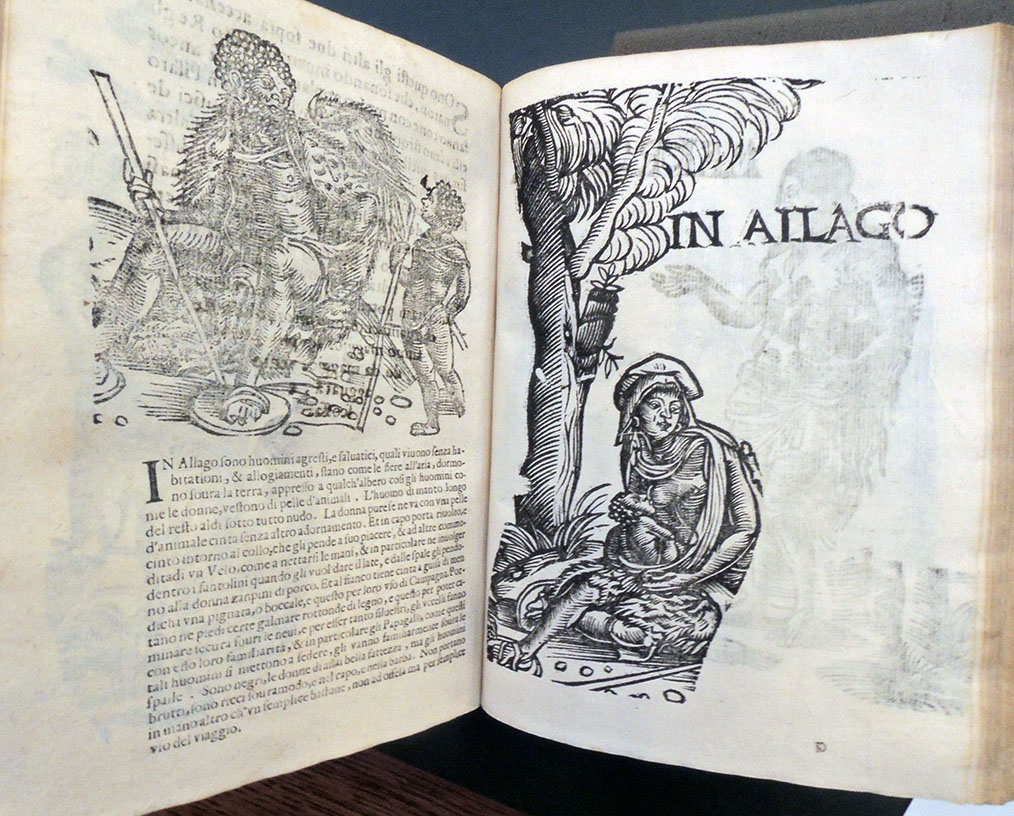 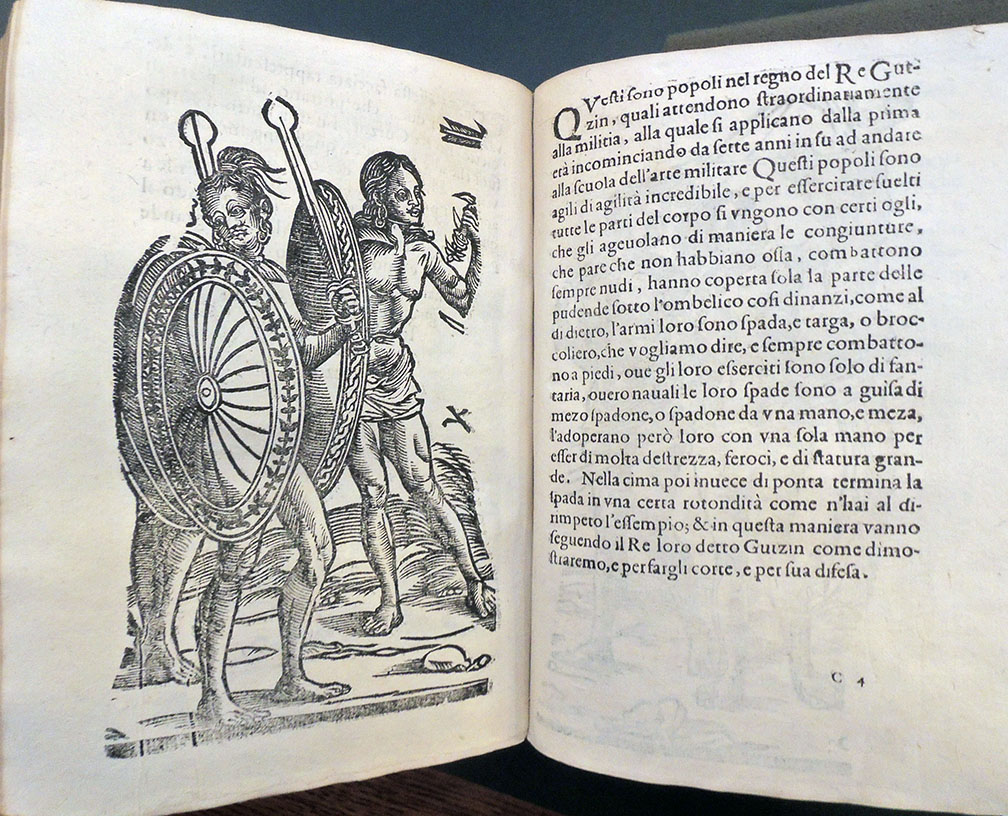 Walter Oakeshott (1903-1987), Some woodcuts by Hans Burgkmair : printed as an appendix to the fourth part of Le relationi universali di Giovanni Botero, 1618 (Oxford: Printed for presentation to the members of the Roxburghe Club, 1960). Graphic Arts Collection 2009-0966N 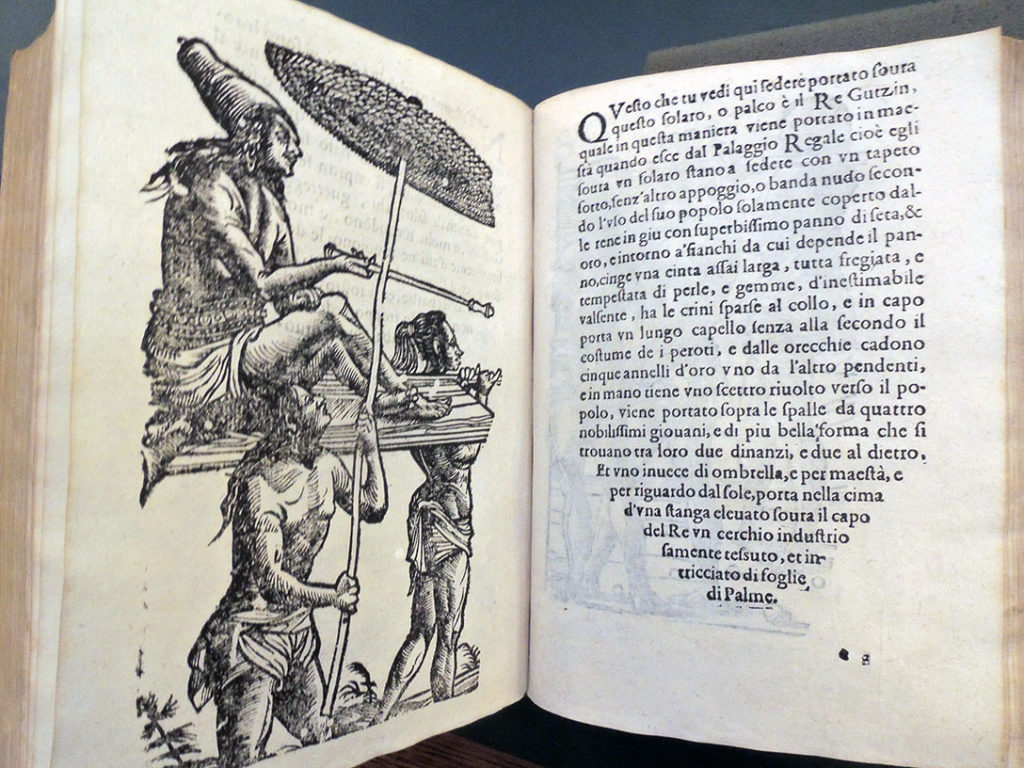