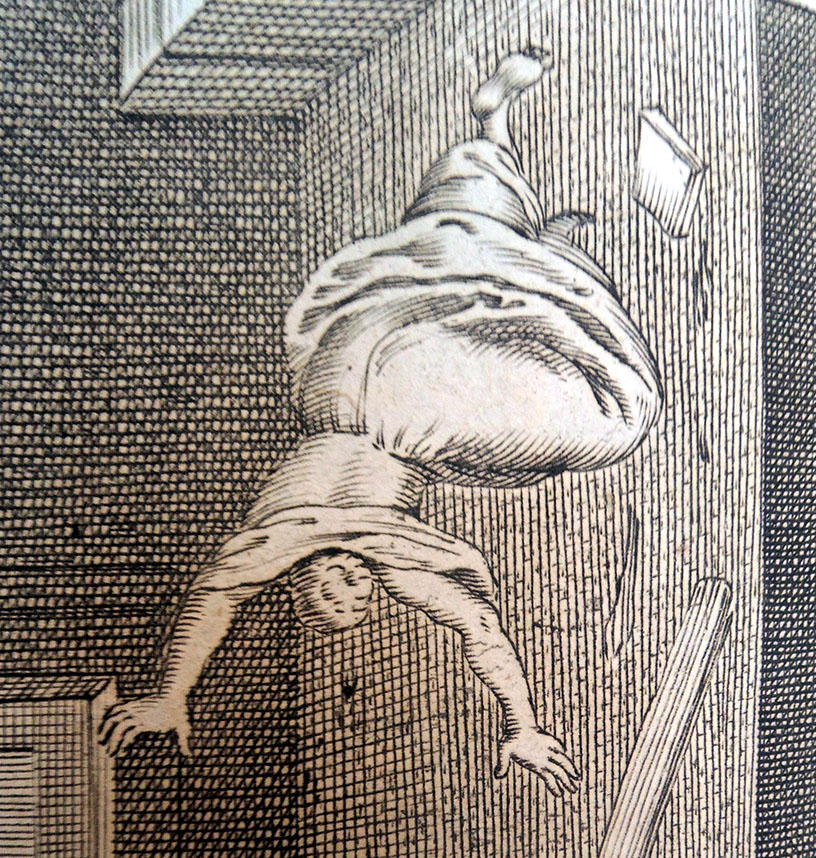 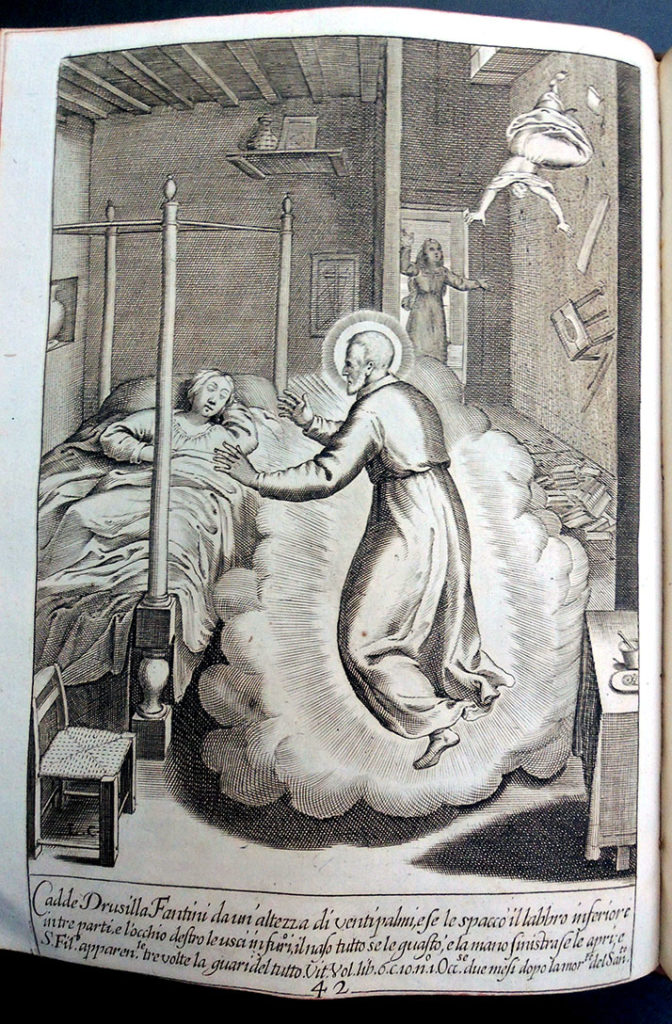 Two months after the Saint’s death, Drusilla, wife of Antonio Fantini, fell from a balcony at the height of twenty palms into a court-yard, striking her head against some pieces of iron which were lying on a table; her lower lip was cut through in three places, and her right eye protruded from the socket; both her eyes indeed were so much injured that her sight was entirely gone; her nose was crushed, and her teeth broken, and there was a deep gash in her left hand; moreover, great quantities of blood issued from her mouth, and she was to all appearance a corpse. …

In the meanwhile Antonio Franco, the surgeon, arrived, and when he had examined the wounds and injuries, he gave it as his opinion that it was quite impossible she should survive …

After these fifteen days, … the sick woman was left alone in the house, she recommended herself in her heart to S. Philip, who formerly was her spiritual father; and as she prayed she felt on a sudden a great weight in her breast, and it seemed as though a handkerchief were forced down her throat, and then gradually drawn up again; whereupon her sight was instantly restored, and she saw the holy father vested as a priest, with a glory around his head, and he was holding the handkerchief in his hand all covered with blood; he said moreover, “Do not be afraid, for thou wilt not die this time:” and in an instant she was cured …. [1847 English translation] 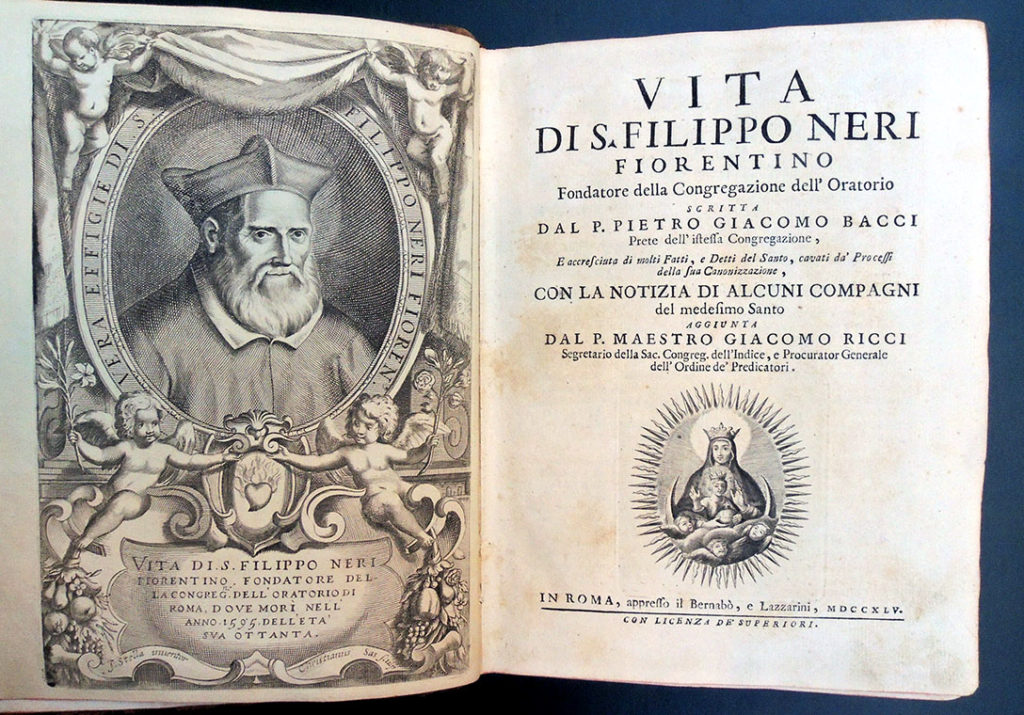 The Graphic Arts Collection recently acquired a lavishly illustrated edition of the popular hagiography (biography of a saint) of Filippo Neri (1515-1595), first published in 1622 and reissued continuously through the twentieth century.

The artists of the frontispiece, title vignette, and 45 engraved plates include:
Engraved portrait frontispiece by the German engraver Christian Sas (born 1648, active 1660) after the French painter Jacques Stella (1596-1657).
Engraved title vignette of the Virgin and Child on the half-moon and 41 plates are by the Italian engraver Luca Ciamberlano (born ca. 1570) after the Italian painter Guido Reni (1575-1642); three plates are by Sas after Stella; and one (no.45) is by the Italian artist Girolamo Frezza (1659-ca. 1741) after the Italian painter Pier Leone Ghezzi (1674-1755). 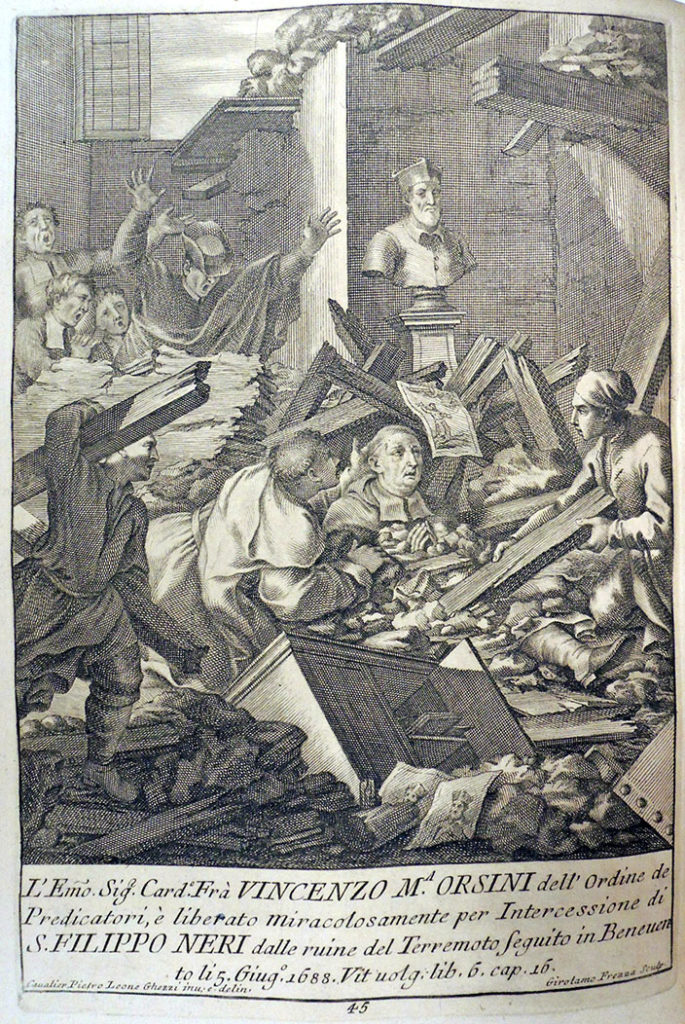 Dealers note: New to this edition is a plate (p. 45) depicting the miraculous rescue of Cardinal Vincenzo Maria Orsini, future Pope Benedict XIII, from the rubble of the church of the Annunziata in Benevento during the earthquake that devastated the area in 1688.

Read more about the iconography of the plates: Massimo Leone, Saints and Signs: A Semiotic Reading of Conversion in Early Modern Catholicism (2010) p. 292-300 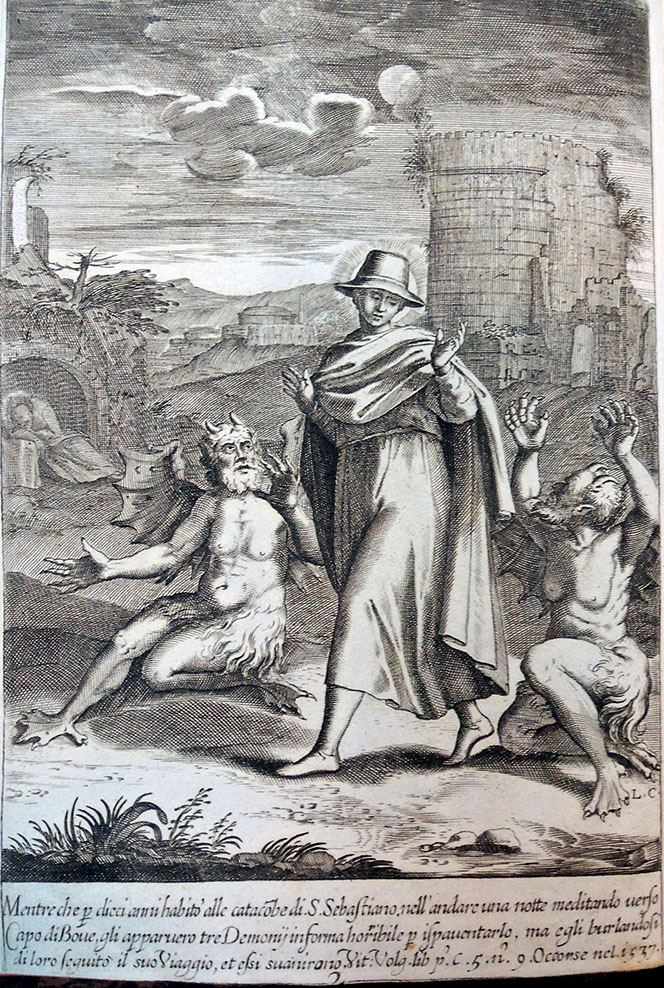 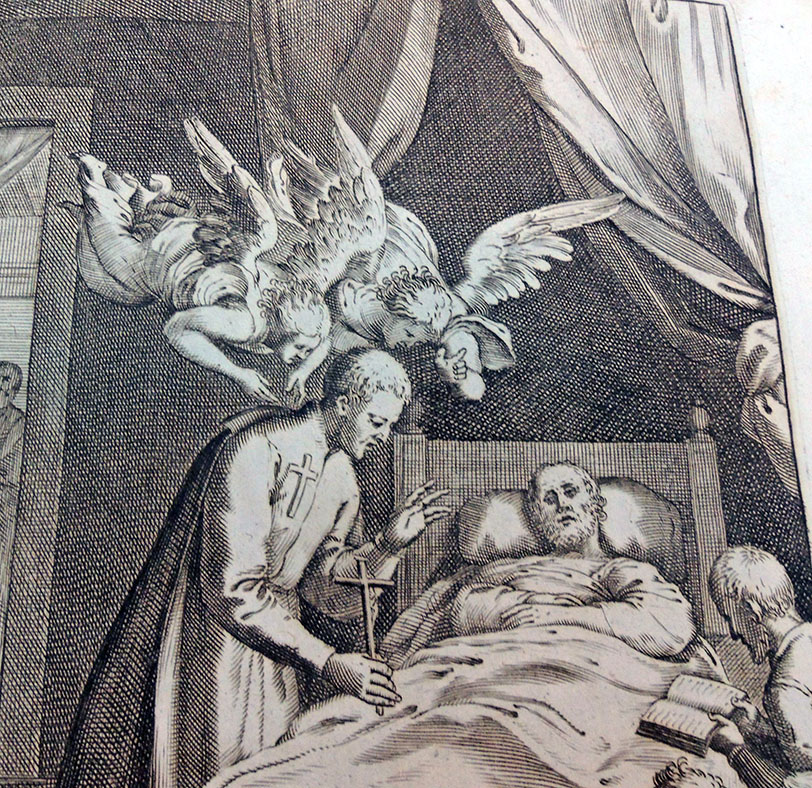 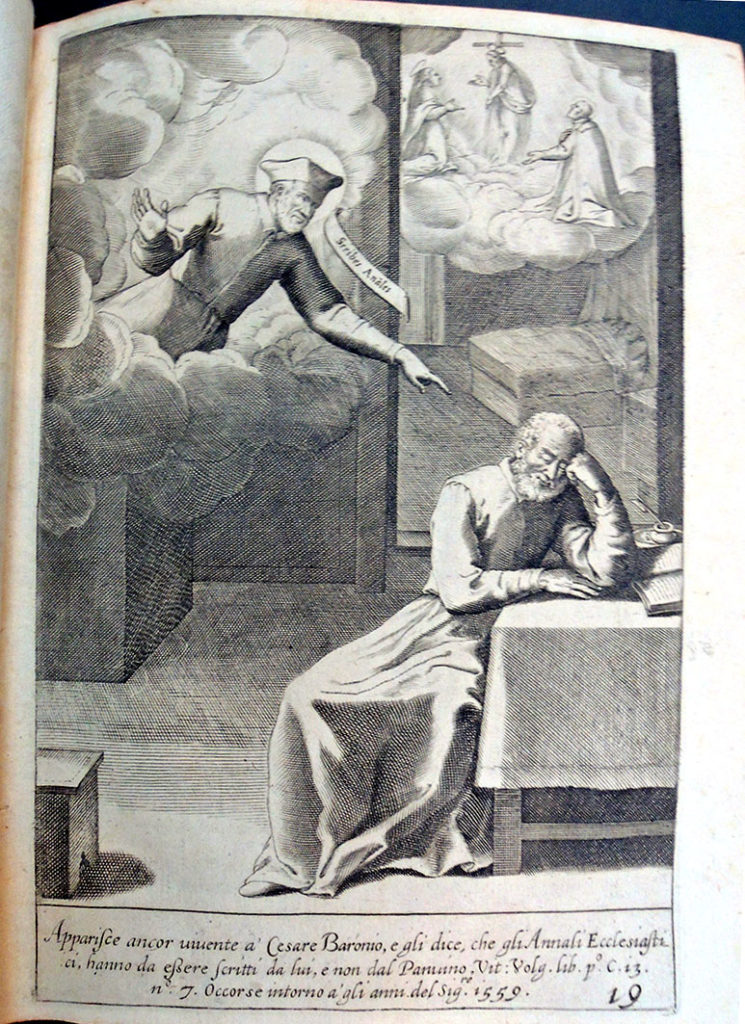 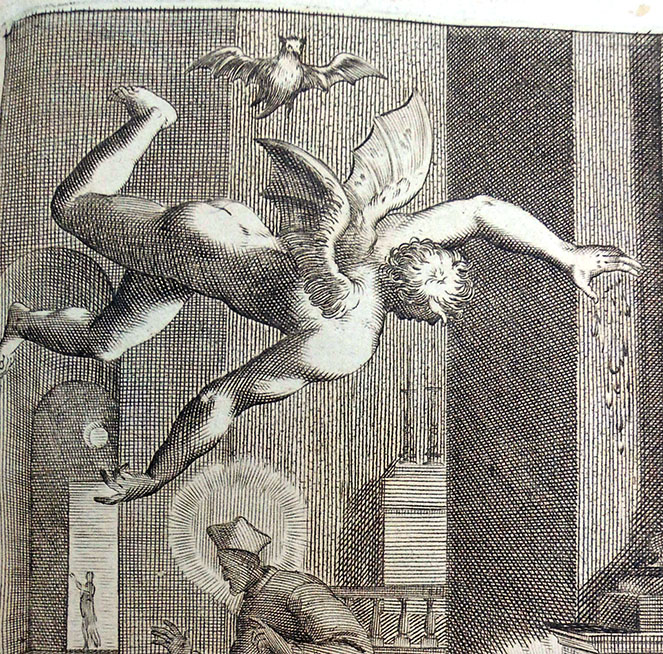 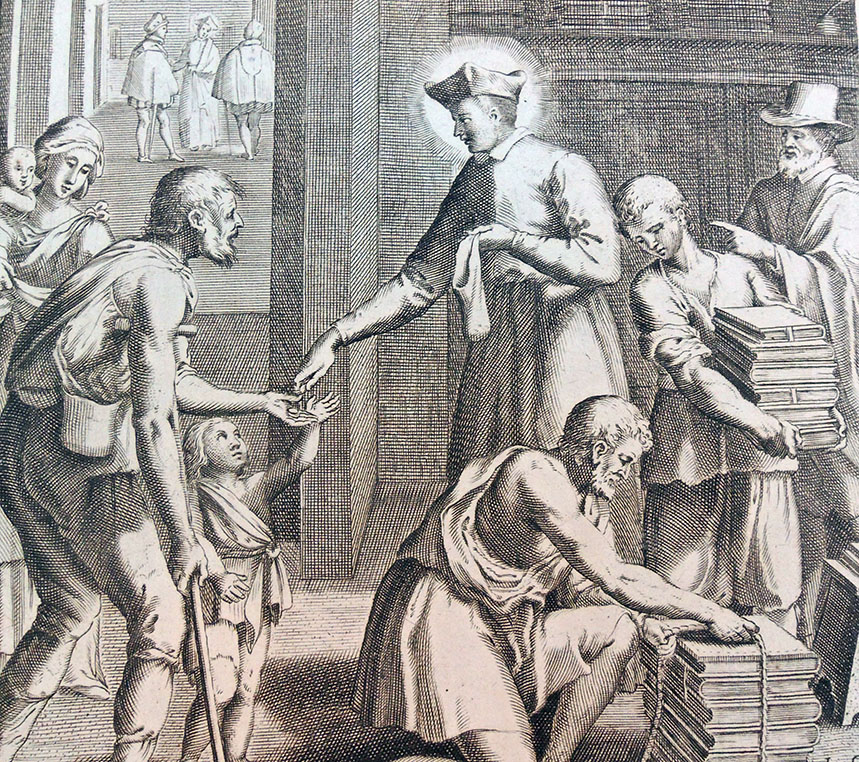 A Roma vende i libri per aiutare i poveri = In Rome he sells books to help the poor.