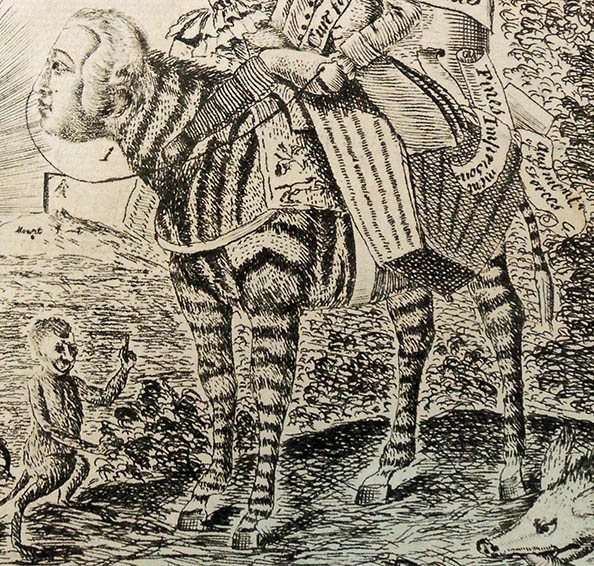 “Some of the first exotic animals to enter France and England in the early 1700s,” writes Geri Walton, “were the chimpanzee and the rhino. They would later be upstaged by the zebra, with one of the striped beasts arriving in England in 1762. It was a wedding gift from Sir Thomas Adams and given to Charlotte of Mecklenburg-Strelitz, who had married George III a few months earlier in 1761.”

The zebra became a shorthand for royal greed and stupidity, appearing in multiple satirical prints of the time. 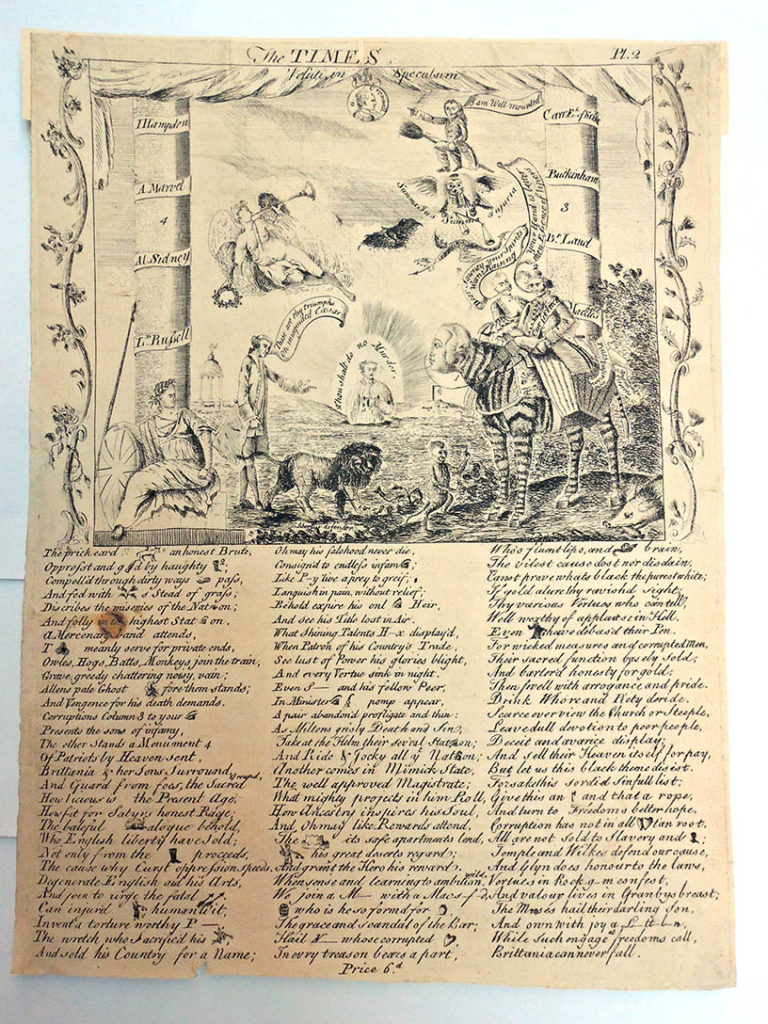 Thanks to the generous donation of Bruce Willsie, ‘86, the Graphic Arts Collection now holds on deposit this 1768 broadside The Times, which was a sequel to the broadside The Times, or 1768. It does not appear to have any connection to William Hogarth’s The Times, from September 7, 1762, although the comparison would make an interesting article.

Here is a copy of plate one from the British Museum. 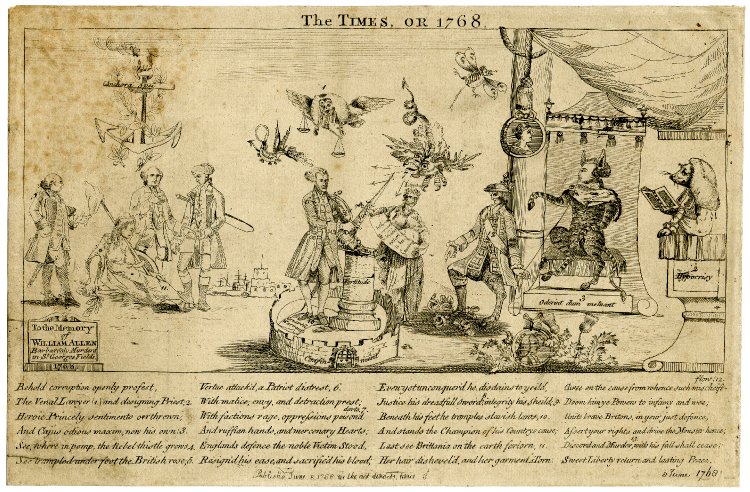 They note “Lettered with the title, captions, twenty-four lines of verse in four columns giving the explanation to a numerical key ‘Behold corruption openly profest … Sweet Liberty return, and lasting Peace.’ and ‘To the Memory of William Allen Barbarously Murderd in St. Georges Fields/ Publish’d June 8, 1768 as the act directs, price 6d’.”

Our new broadside features William Allen rising from the dead in the center of the print, while Lord Bute rides a zebra with the head of George III on the right.  The verses below are written in the form of a rebus, substituting controversial words for pictures. Dorothy George writes for the British Museum:

“A broadside satirising Lord Bute, blaming him for the murder of William Allen; with an etching showing a landscape with two columns inscribed with the names of politicians, between the columns at the top centre a medallion of Oliver Cromwell, the left side of the image shows good influences, including a seated figure of Britannia and the Earl Temple accompanied by the British Lion, above them Fama blowing a trumpet and holding a laurel wreath, on the right side, dedicated to the bad influences, Lord Bute riding a zebra which has the head of King George III, near the zebra various animals, in the centre of the image the ghost of Allen rising from a grave; with engraved title, inscriptions, speech-bubbles, and verses in form of a rebus. (n.p.: [1768])”

William Allen was an innocent spectator killed by soldiers of the Scots Guard during the riots in St George’s Fields on 10 May 1768. The anonymous artist of the two quickly produced etchings are taking Lord Temple’s side, blaming Lord Bute, and his close connection with King George III, for the murder. 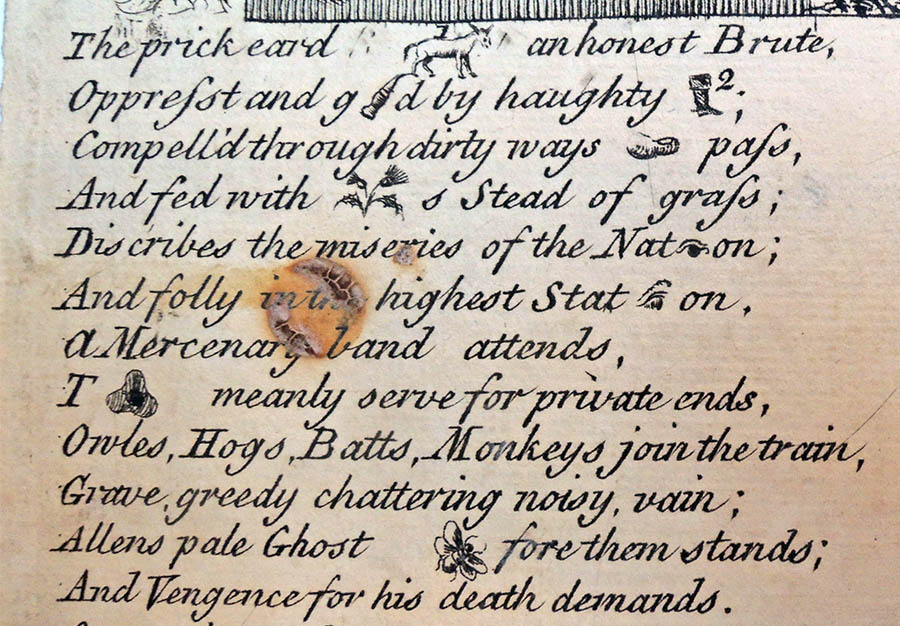 Can you make out the sentences? 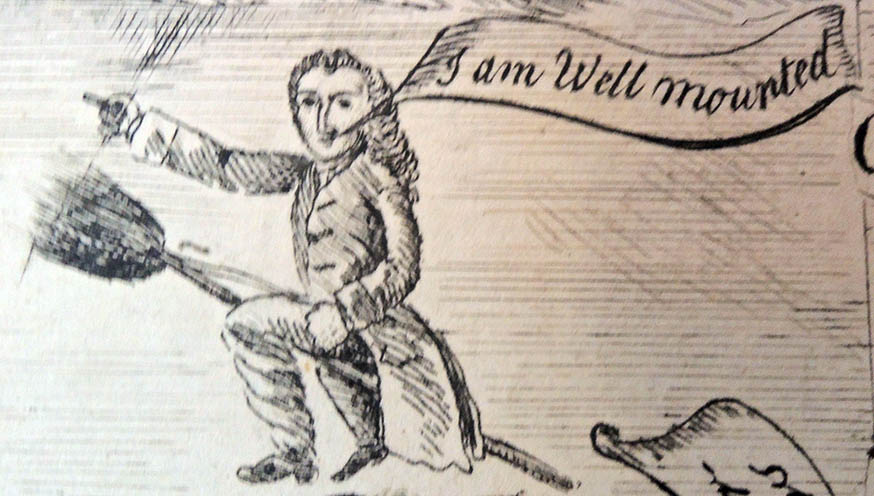 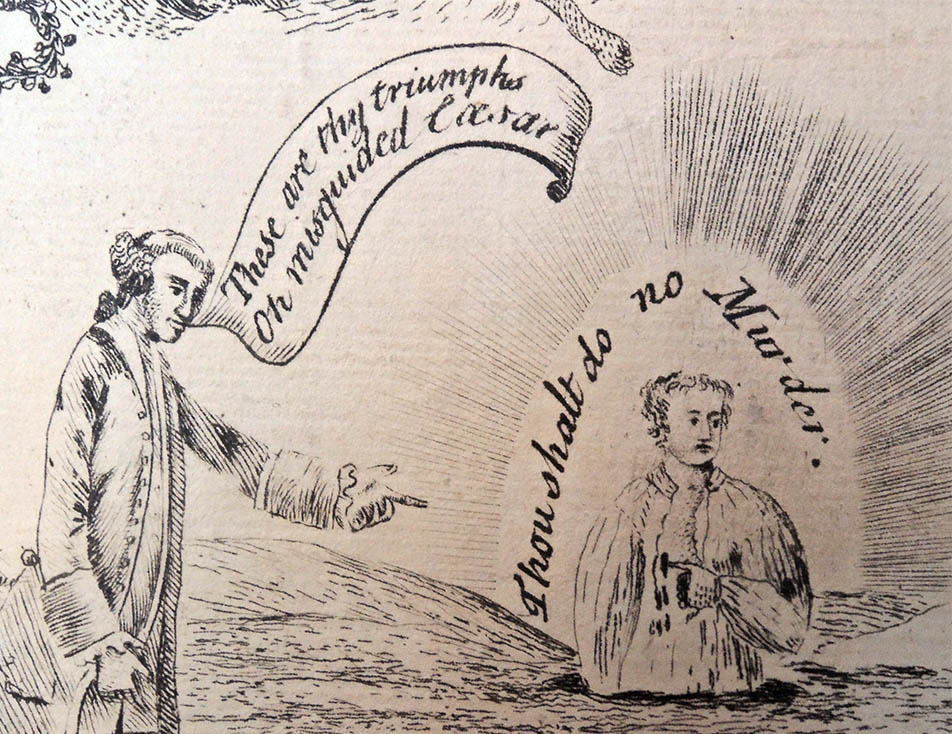 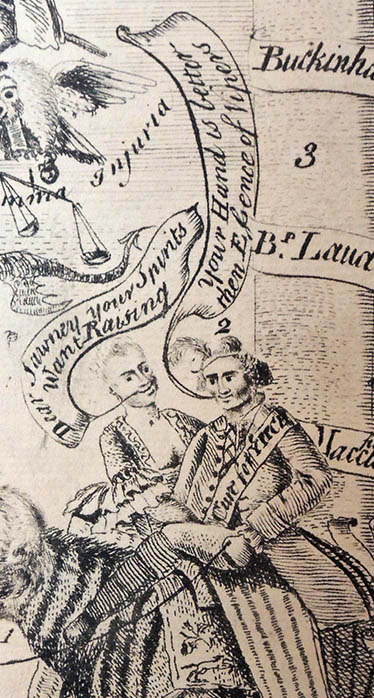