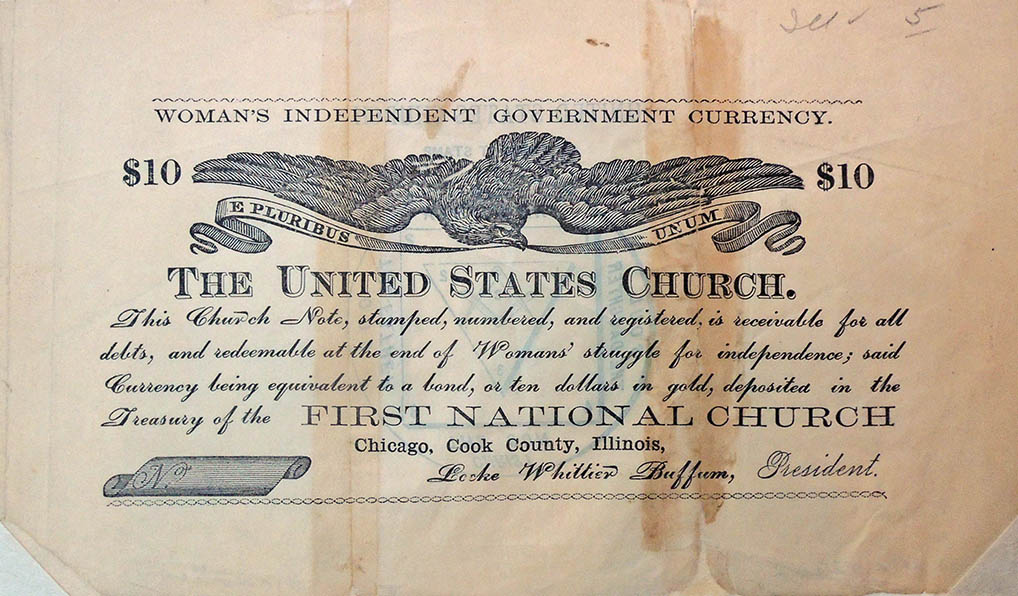 This $10 bond in the Graphic Arts Collection comes with a Masonic label on the back. It is uncertain what the connection is although there was an interesting new church established in Chicago in 1868. 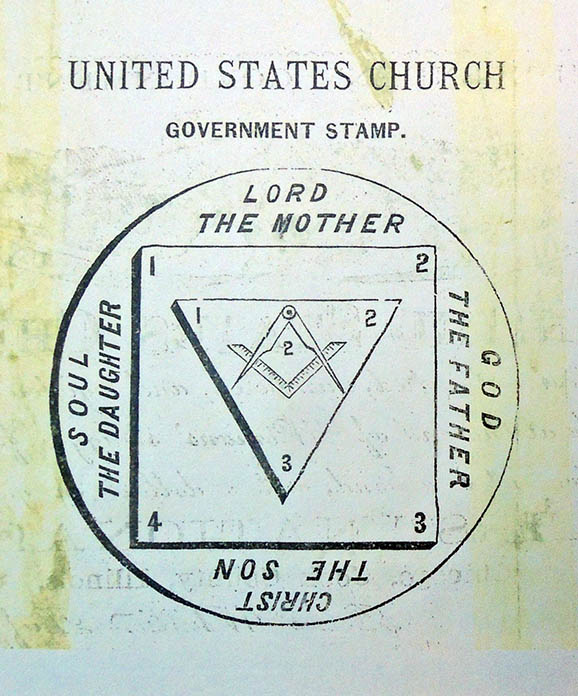 On August 26, 1868 The New York Times published an article entitled “The Kingdom of Woman. Another Astonishing Development of Spiritualism,” introducing the “headquarters of an extraordinary association of men and women, who deem their great mission to be the formation of a new empire, to be governed by females…”  —https://www.nytimes.com/1868/08/26/archives/the-kingdom-of-woman-another-astonishing-development-of.html

Over the next few years, papers in Indianapolis and other cities around the country echoed the announced:

“Euphemia Regina, Masonic queen of wisdom’s sacred temple, proposes to establish a memorial church at Warehouse Point,” which “is intended to enable woman to make a free pulpit and rostrum for her to dispense the law and ordinances of religion and politics, forming a divine marriage of church and state, and inaugurating ’The New Wisdom Age,’ for the world’s redemption. “Euphemia Regina” is “Sophronia Billings Abbe, grand scribe and corresponding secretary.” — Indianapolis News, Indianapolis, Marion County, 3 September 1872

It seems doubtful the church announced in 1868 relates to the “United States Church” above. This article http://www.iapsop.com/ssoc/1868__scott___spiritualism_not_divine.pdf
“Spiritualism Not Divine: or a System of Demonry [sic], Imposture, and Infidelity Examined in The Light of Philosophy, History, Morality, and the Bible” by James S.H. Scott (1868), takes it even further. Here is a small section:

“The pecuniary obligation incurred by the Masonic Queen of Heaven in the business transaction with which we were favored, had been liquidated, so to speak, as our readers will remember, by the tender of certain cabalistic bills on the Wisdom Bank, each entitling the bearer to Forty dollars worth of good in the City of Light and Love. A facsimile of this supernatural medium of exchange also appeared in our columns in connection with the aforesaid description.

These bills, it should be remembered, were, strictly speaking, neither current nor negotiable; they were, according to their tenor, based upon real estate, and were to be retained by the holder as a charm against all evil, sufficiently long to enable the influence which attended them to pervade his being, and then an agent of Euphemia Abia would, if desired, redeem them in the ordinary currency of the realm. The chief of the Republican job office, owing to grossness and skeptical obtuseness of his spiritual organism, failed to be come susceptible to the developing inducements of these pecuniary charms, and, probably as are buke to his infidelity, Euphemia Abia also failed to perform her part of the contract, and her agent so long delayed his advent that the most sanguine began to doubt the reality of this supernatural existence.

We have now, however, to announce the fact that the Masonic Queen of Heaven has caused to be fulfilled, in part, the vaticinations of Lady Sophronia Kilbourne, an agent having actually redeemed a third portion of these heavenly promises to pay, to the more than intense delight and astonishment of those to whom they were made payable. It becomes, therefore, a pleasant duty to chronicle the birth of a new organ of intelligence, The Wisdom Age, the printing of which, by the Republican job establishment was attended by the afore-and-above mentioned unusual business incidents, and the issuing of which to the world was delayed by these little idiosyncratic maneuvers of Euphemia Abia, Masonic Queen of Heaven, under whose auspices The Wisdom Age has been inaugurated.