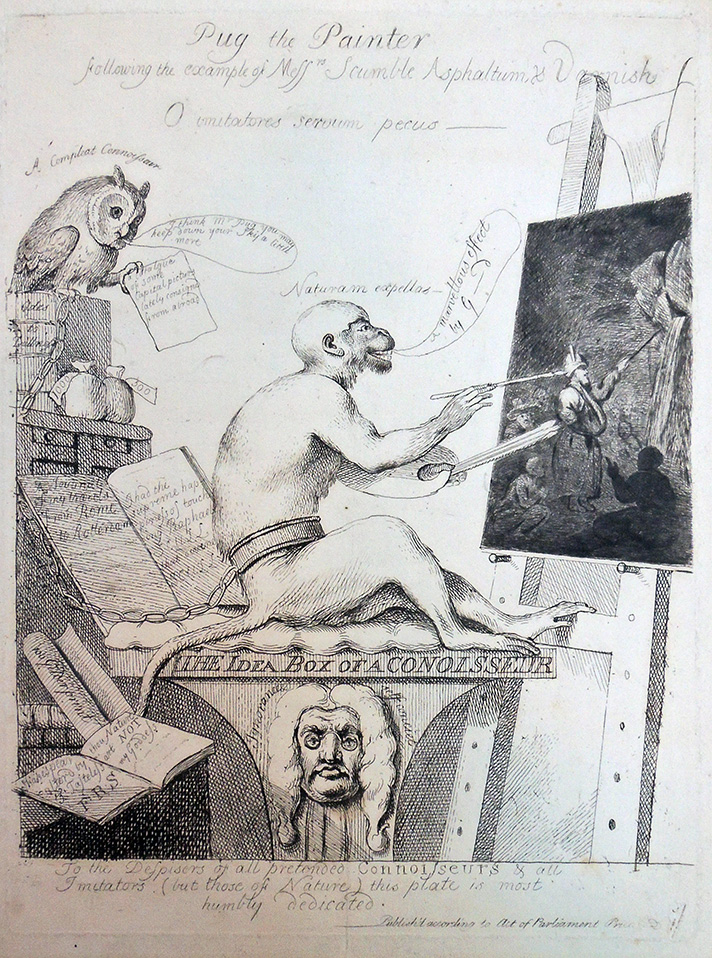 Pug the Painter Following the Example of Messrs Scumble Asphaltum & Varnish. … [at foot]: To the Despisers of all pretended Connoisseurs & all Imitators (but those of Nature) this plate is most humbly dedicated … [London], [ca. 1754-1757]. Etching and dry point (289 x 214 mm). Graphic Arts Collection GAX 2019- in process. 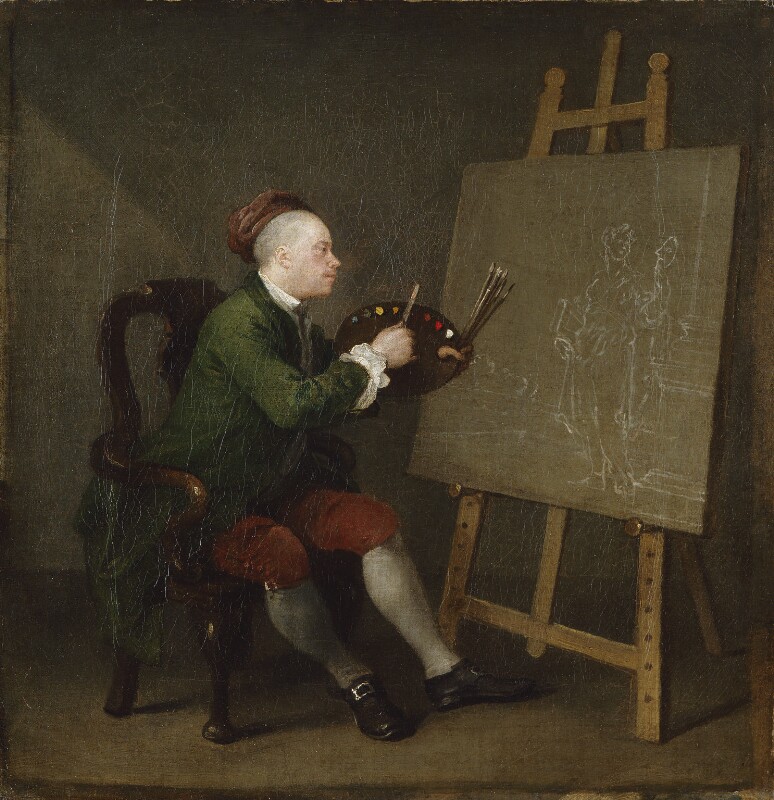 The Graphic Arts Collection recently acquired this rare print, designed after William Hogarth’s self-portrait, ca. 1757 [left] and originally sold in a portfolio under the title “The Caricatures on Hogarth by Paul Sandby,” further labelled “Retrospective Art, from the Collection of the late Paul Sandby, Esq. R.A.,” priced M. 6s (note, on this sheet the 1s/price partly erased). While no longer attributed to Sandby, the print makes a fascinating and complex satirical attack on Hogarth. Frederic Stephens’s 1877 Catalogue of Prints and Drawings in the British Museum explains:

“3277. “Pug the Painter following the example of Mess” Scumble Asphaltum & Warnish.” “O imitatores servum pecus * [By Paul Sandby.] Publish’d according to Act of Parliament … [1754]. An etching; on a pedestal which is decorated with a wigged and spectacled head of “Ignorance & self conceit”, and inscribed “THE IDEA Box of A coxoissevil”, is seated an ape, painting “Moses striking the Rock”, a picture in the manner of Rembrandt. He is exclaiming, “A marrellous effect by G—d”. 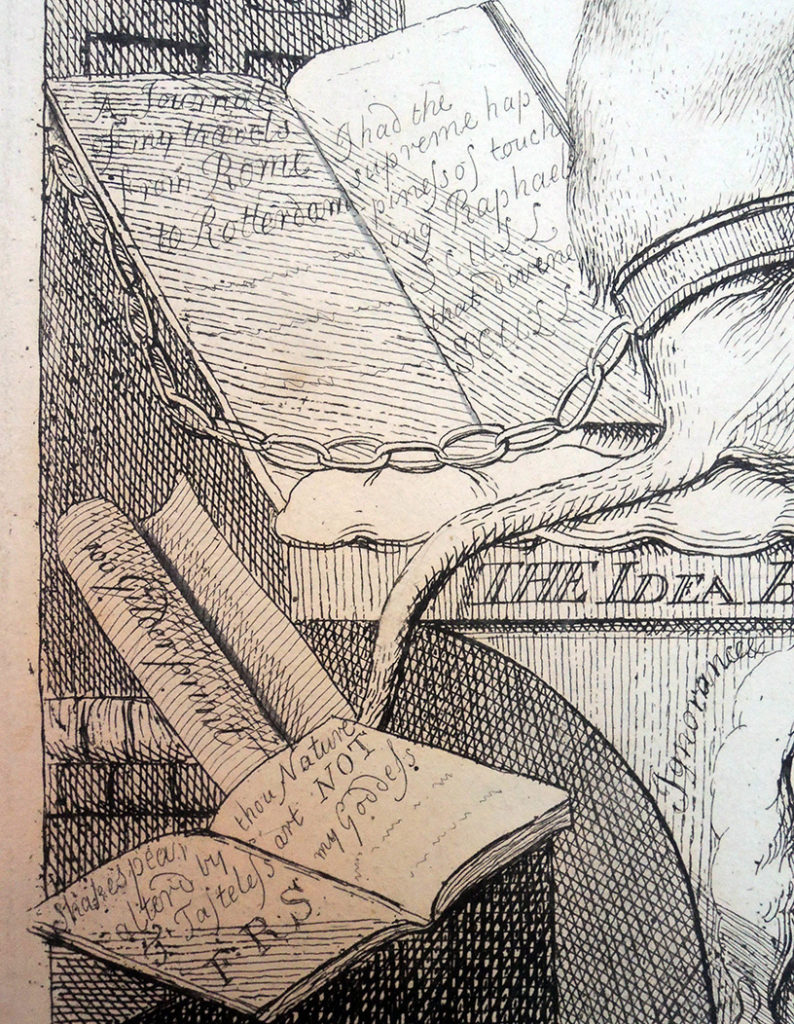 Behind him is a book inscribed, “A Journal of my trarels from Rome to Rotterdam I had the supreme happiness of touching Raphael scu LL that dirine scroll”.

… On a table are the “100 Gilder print” rolled up, and an open book, named “Shakespear alter’d by T. Tasteless FRS thou Nature art NoT my Goddess”.

Stephens makes the suggestion that Philip Dawe or Dawes (died 1832) was responsible for this print. Dawe was a British printmaker who lived at the same time as Hogarth, known for his mezzotints and political caricature but the suggestion has not been accepted by others.

The text refers to quotations from Horace: “O imitators, servum pecus” (Imitators, a servile herd) and the opening words of the aphorism “Naturam expellas furca, tamen usque revenit” (Though you may drive out nature with a pitchfork, she will nonetheless return).

Hogarth’s attacks on amateur gentleman connoisseurs and his frustration at the privileging of Old Masters are alluded to by placing the central figure on a plinth with the motto “The Idea Box of a Connoisseur.” Beneath the design is engraved: “To the Despisers of all pretended Connoisseurs & all Imitators (but those of Nature) this plate is most humbly dedicated.”

This animosity towards amateurs is mocked by representing Hogarth as an amateur himself, referring to his rejection of the ‘Raphaelite’ style and implying that this results from Hogarth’s own lack of taste. 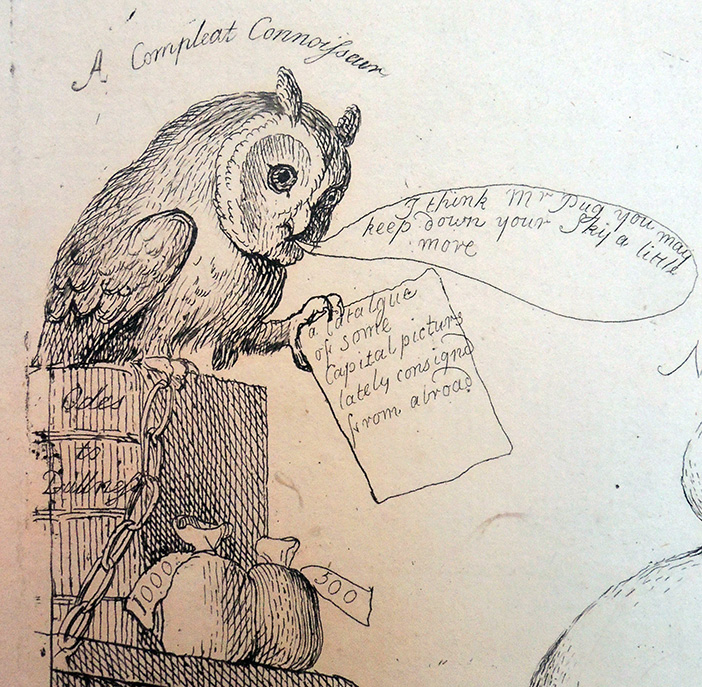 An owl, labelled A Compleat Connoisseur, sits on a volume titled Odes to Dullness and  speaks to the painter, “I think Mr Pug, you may keep down your Sky a little more.” One claw holds a note that reads “A Catalogue of some Capital pictures lately consigned from abroad.” Bags of money sit below.

The print comes with with a statement by the dealer, “Pug the Painter attempts to construct an artistic identity for Hogarth based upon notions of incompetence, hypocrisy and artifice. It takes the painter’s objections to academic painting, and inverts this to cast Hogarth as a bad painter, incapable of achieving the visual perfection of nature.” 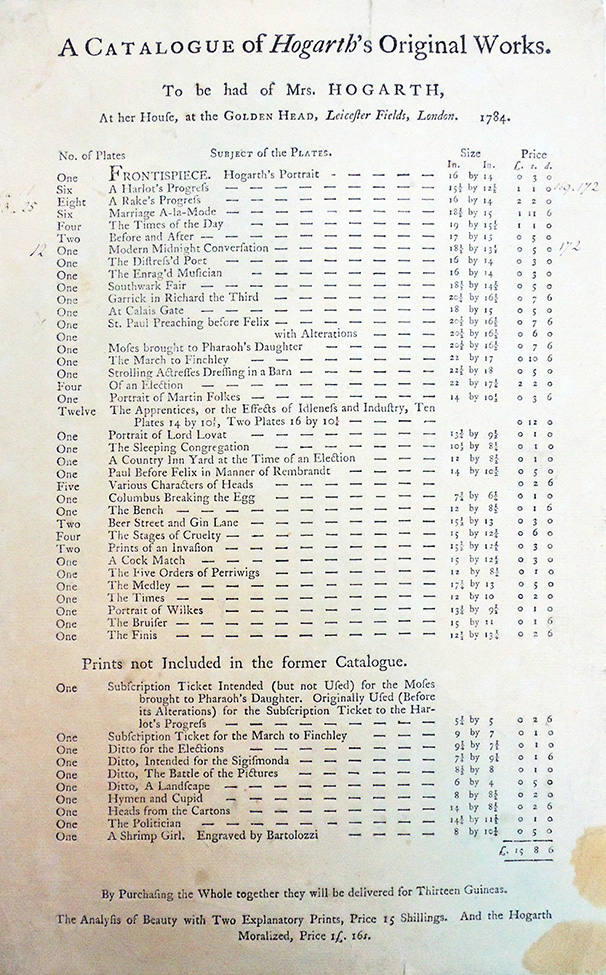 In 1767 William Hogarth’s widow Jane Hogarth, who owned his copper plates, was granted a further twenty years of copyright by Parliament. In January 1783 Jane Hogarth announced in the Daily Advertiser that the plates she was reprinting had not been retouched since her husband’s death (Paulson, Hogarth Graphic Works, pp. 19-20).

This broadside catalogue of prints available from Jane not only lists the prints and the series, sizes, and prices, but several measurements are corrected by a contemporary hand. A folio of all prints is also offered, “By Purchasing the Whole together they will be delivered for Thirteen Guineas,” as is the book, Analysis of Beauty. Only the British Library and Yale University hold other copies of the sheet. 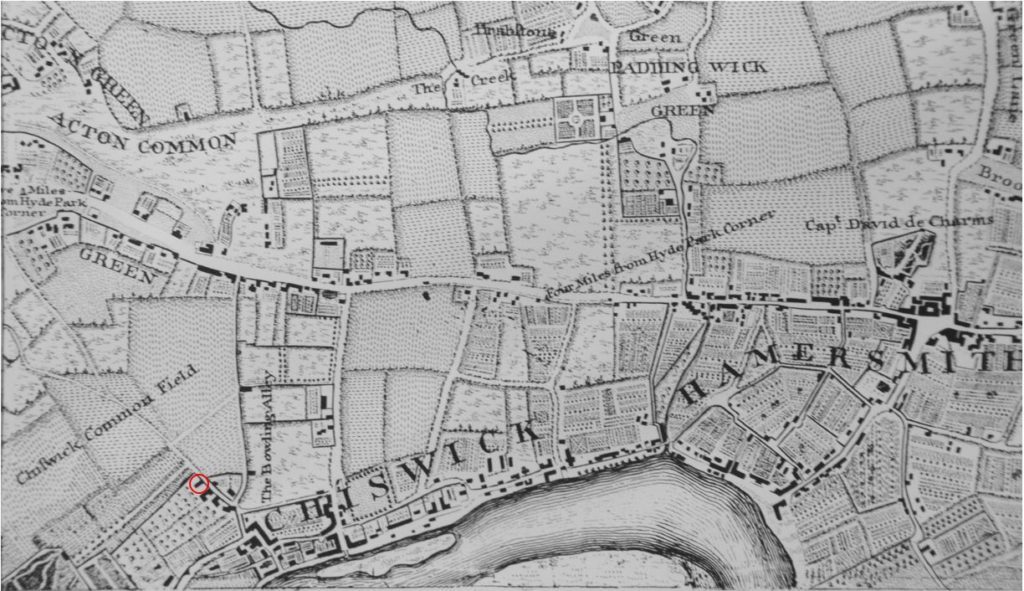 “The following extract is from John Rocque’s map of 1746, three years before Hogarth purchased the house. The map shows the house to the northwest of the village of Chiswick, the last in the lane approaching Chiswick Common Field. I have circled the house in red.”–https://alondoninheritance.com/london-characters/hogarths-house/