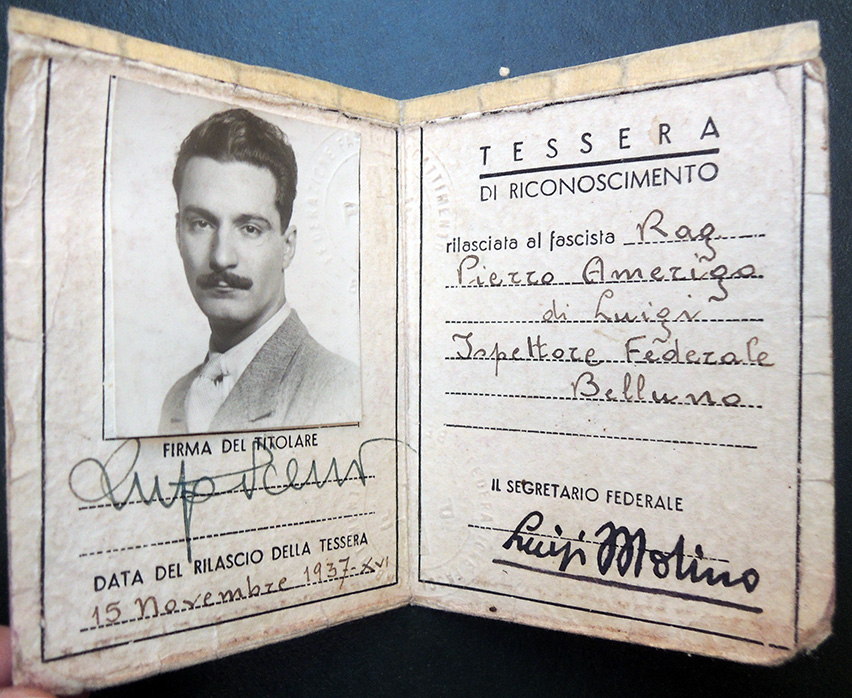 A collection of tessera di riconoscimento (membership cards) from 1920s and 1930s fascist trade unions was recently acquired, including several with photographic portraits of the owners. Many have colorful designs and logos, representing the various professions including farmers, postal workers or taxi drivers. The Fascists organized these trade unions or syndicates to “replace Socialist or Catholic organizations, to provide mass membership, and to control labor.” 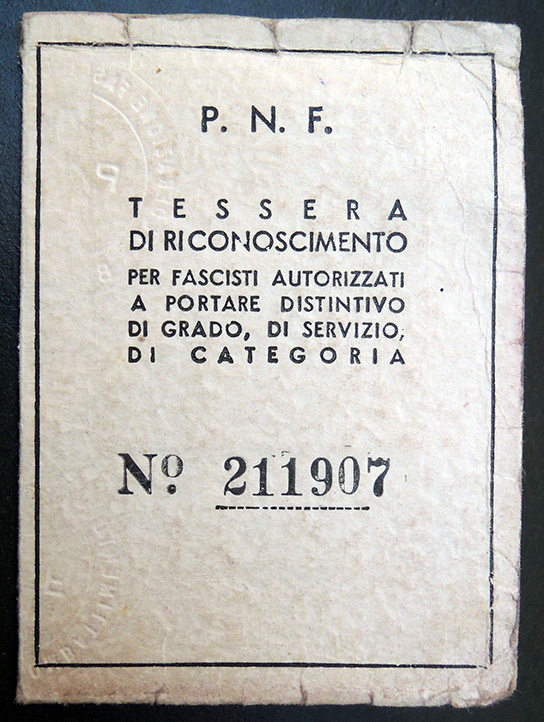 “The trade unions were also brought under the authoritarian control of the state. The law of April 3 1926 on labour relations made strikes illegal and created a ‘magistracy of labour’ to resolve all disputes between labour and employers. Eleven trade unions received legal recognition, and these were all Fascist organizations. The Confederation of Fascist Trade Unions that had been set up in 1922 had become a powerful organization and was led by Edmondo Rossoni. Rossoni was committed to the ambitious plan of implementing an integralist from of syndicalism that would have brought all workers and employers under the control of his federation. But in 1928 Mussolini destroyed this project when he insisted that the federation should be broken up into smaller organizations.

The abandonment of the programme of Fascist syndicalism was to the advantage of the employers, and for the workers was only partially compensated by the social and welfare policies of the regime, consisting in the establishment of collective contracts, of measures to reduce unemployment, and the organization of workers’ free time through the activities of the Opera Nazionale Dopolavoro.

The regime hailed its law on the trade unions as the first step towards the realization of a new corporate order that would lead to what the Charter of Labour (21 April 1927) called the ‘united organization of all forces of production’. A ministry of Corporations was established in 1926 and the National Council of Corporations created in 1930 was designed to be the central constitutional body of the new state, although the corporations themselves did not come into being until 1934.” –Roger Griffin and Matthew Feldman, Fascism: The ‘fascist epoch’ (2004). Firestone JC481 .G694 2018 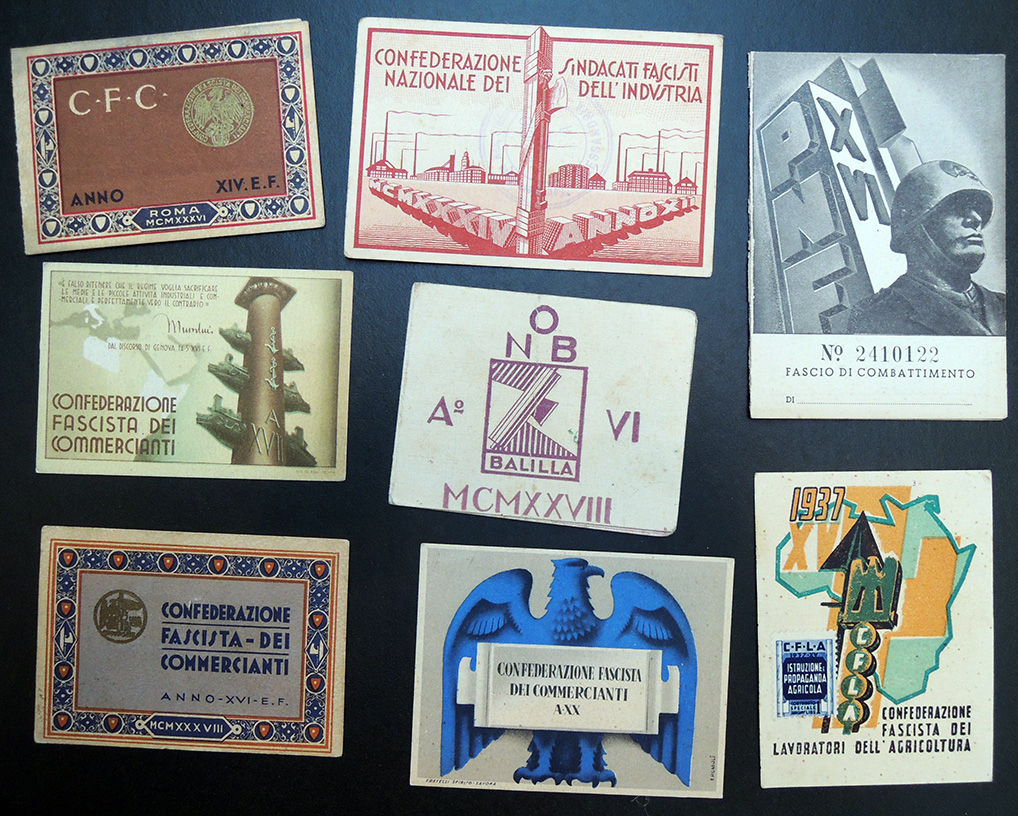 We hope to set up an excel sheet with all the information on the cards and attach it to the online record in the near future. 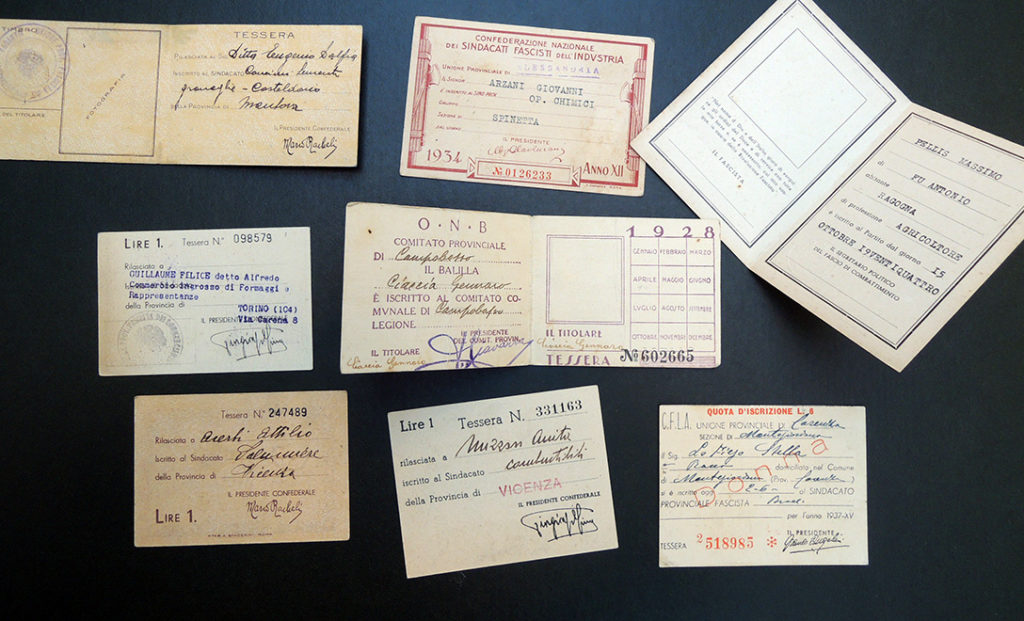 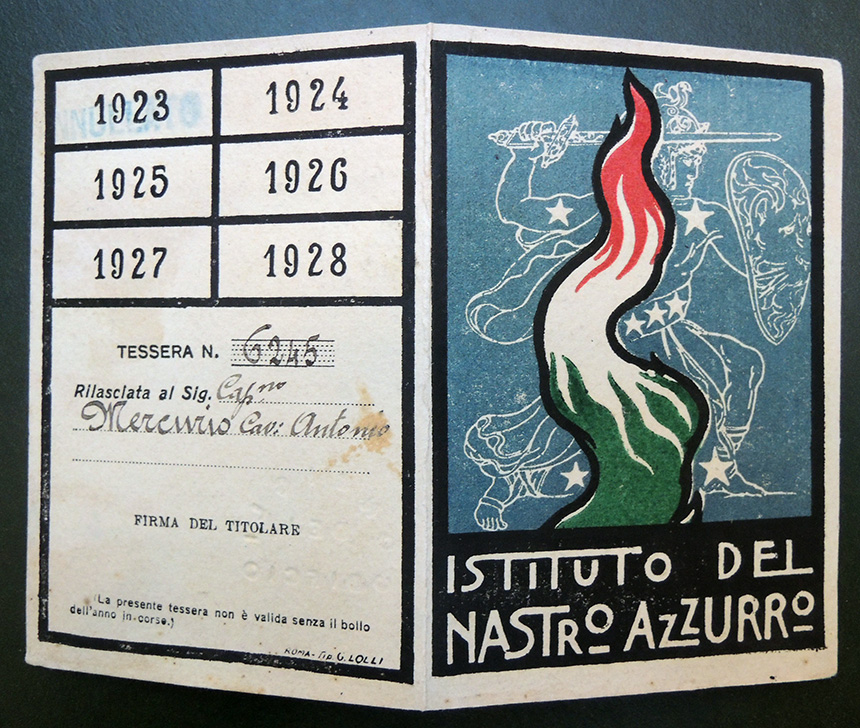 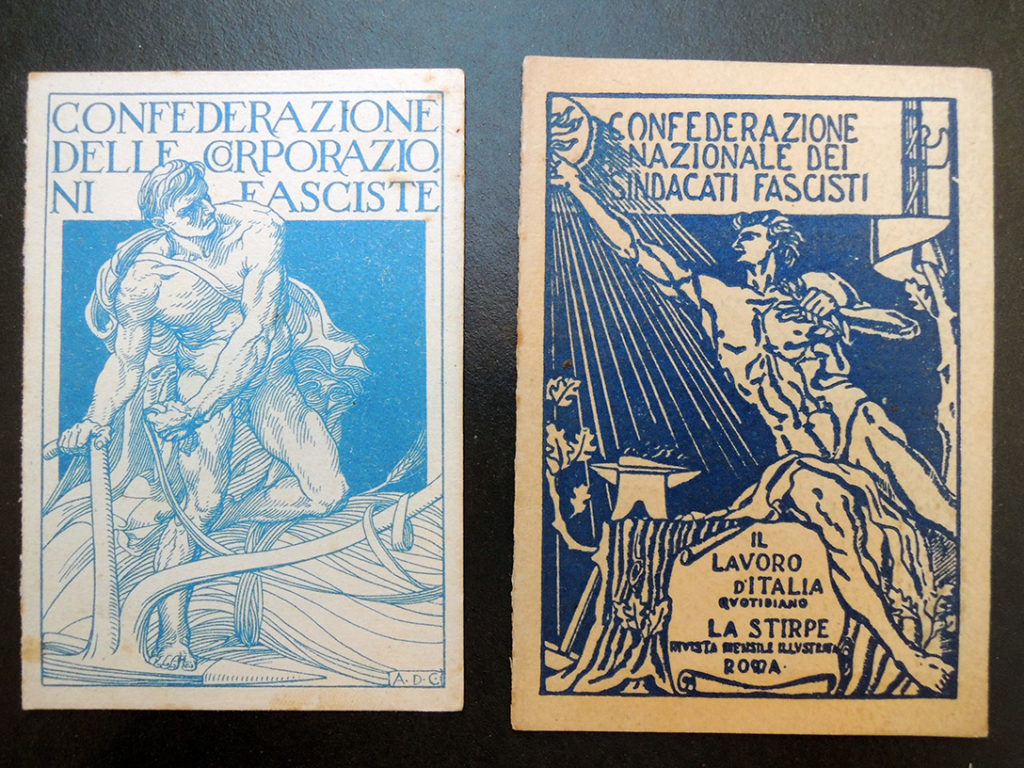 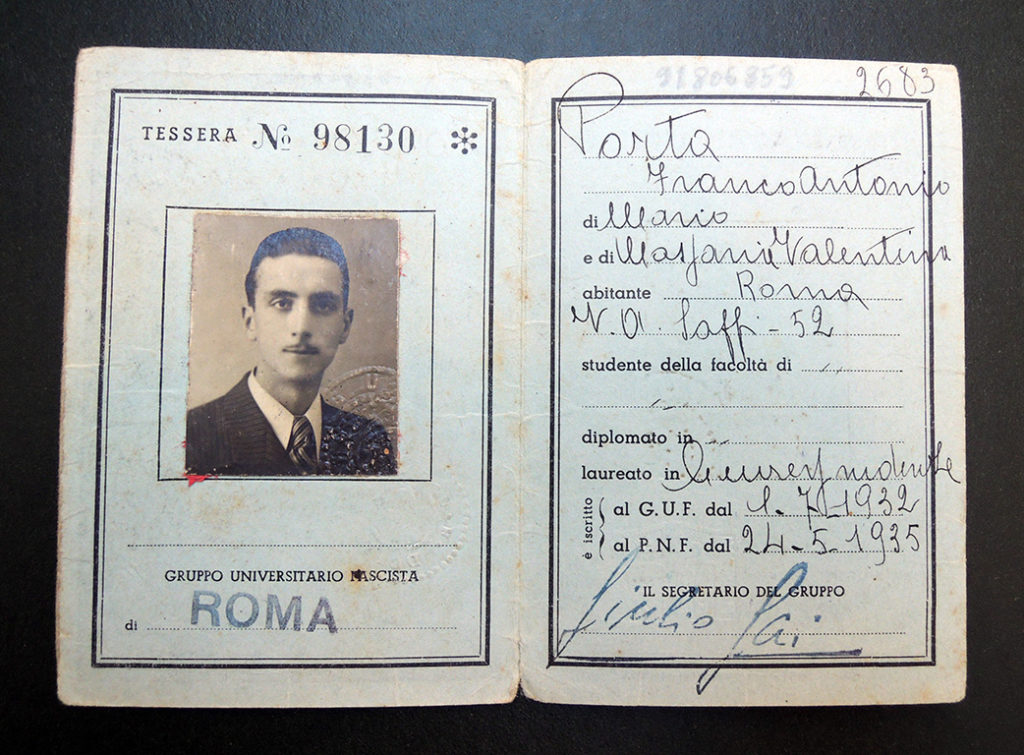 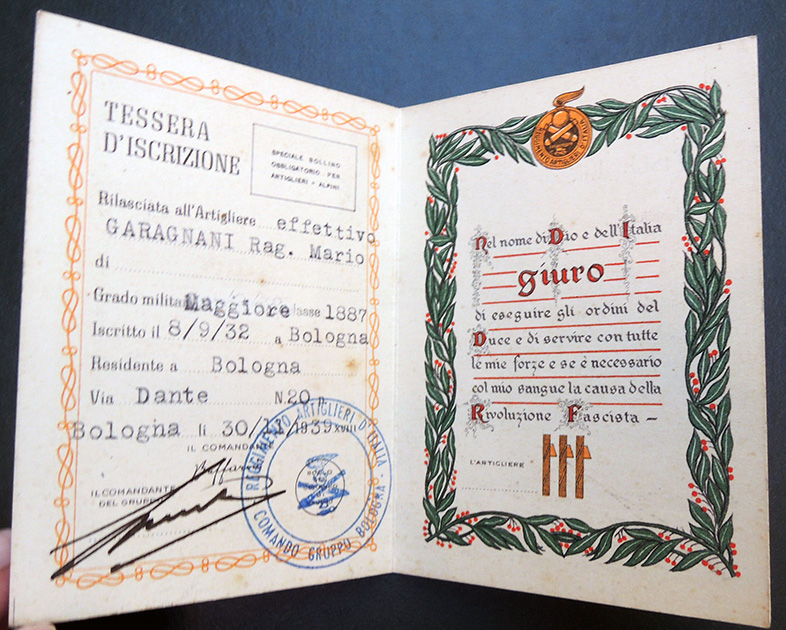 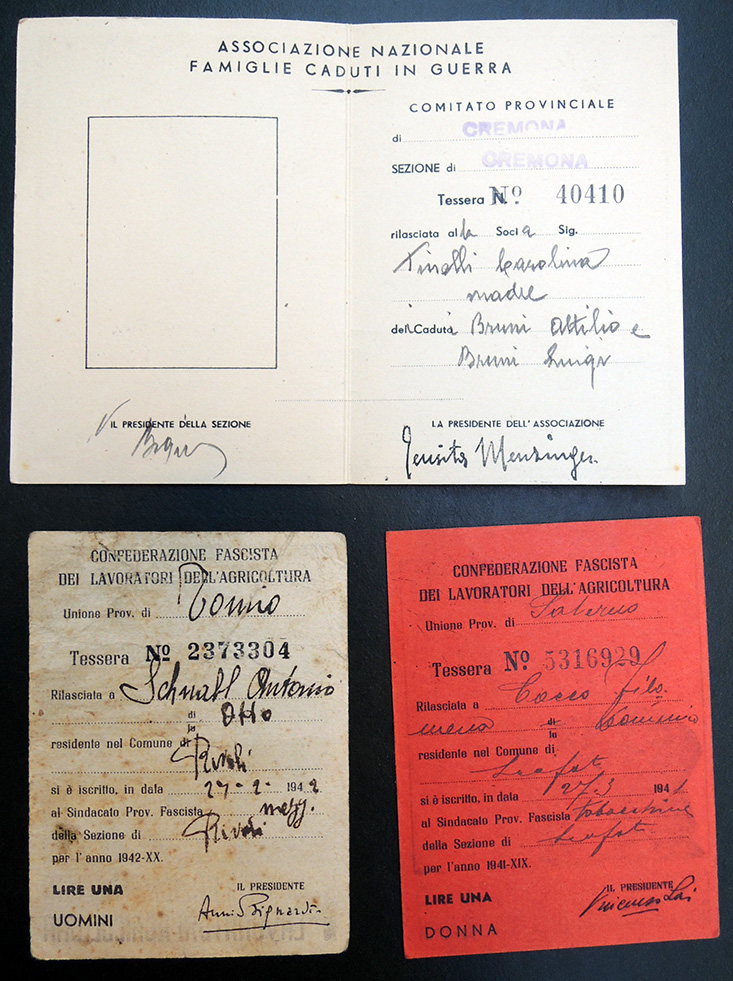 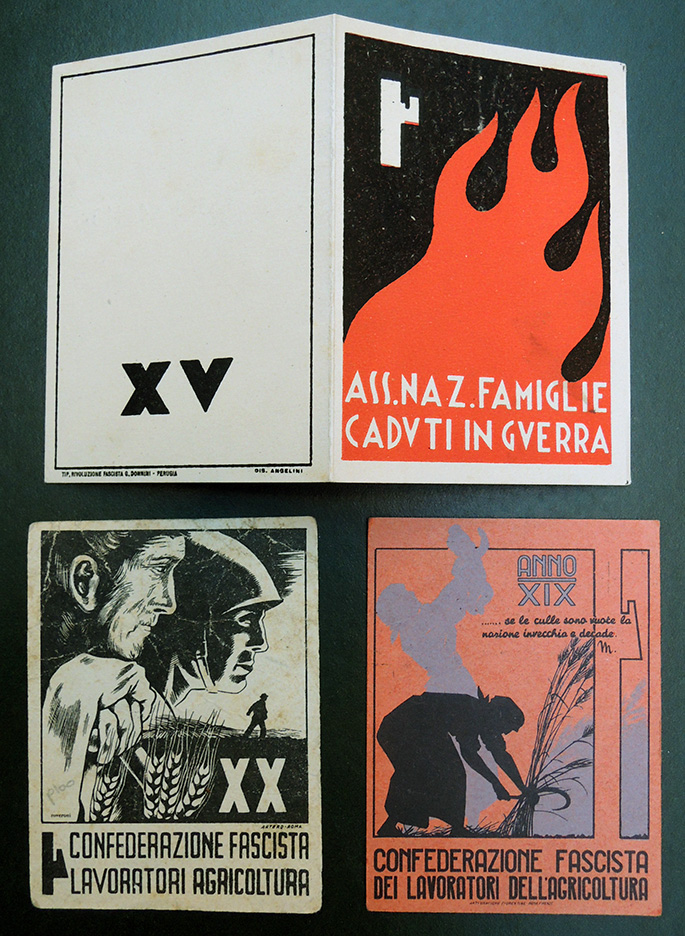