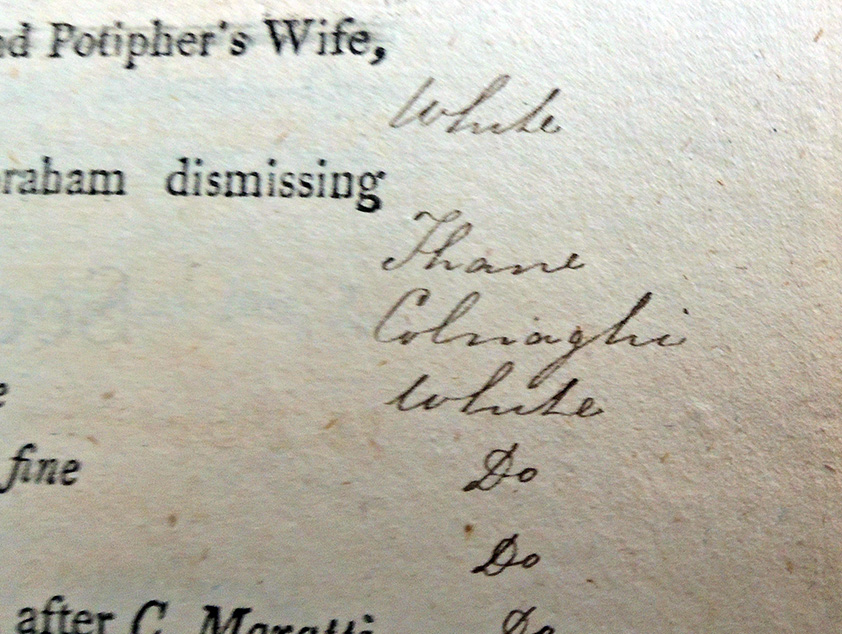 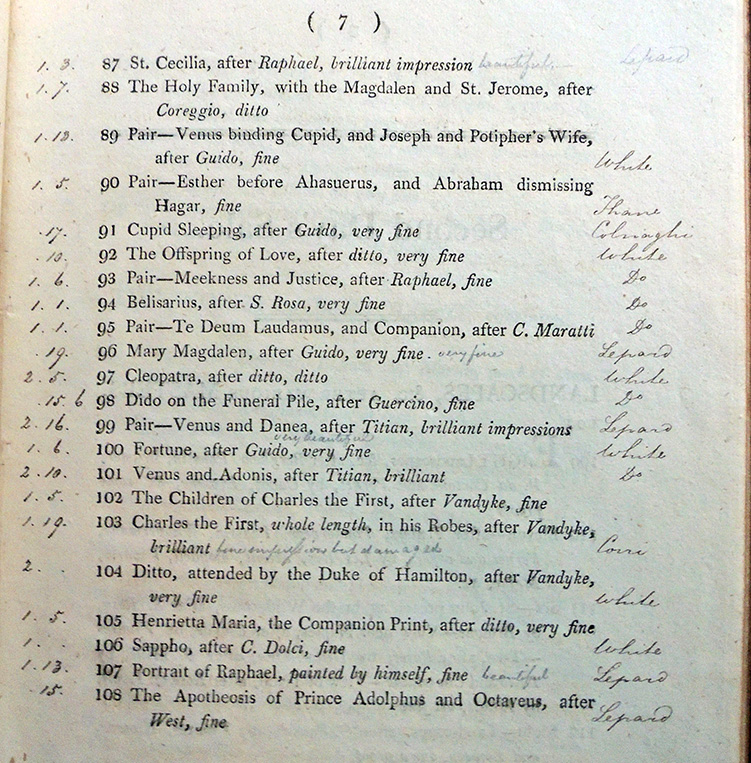 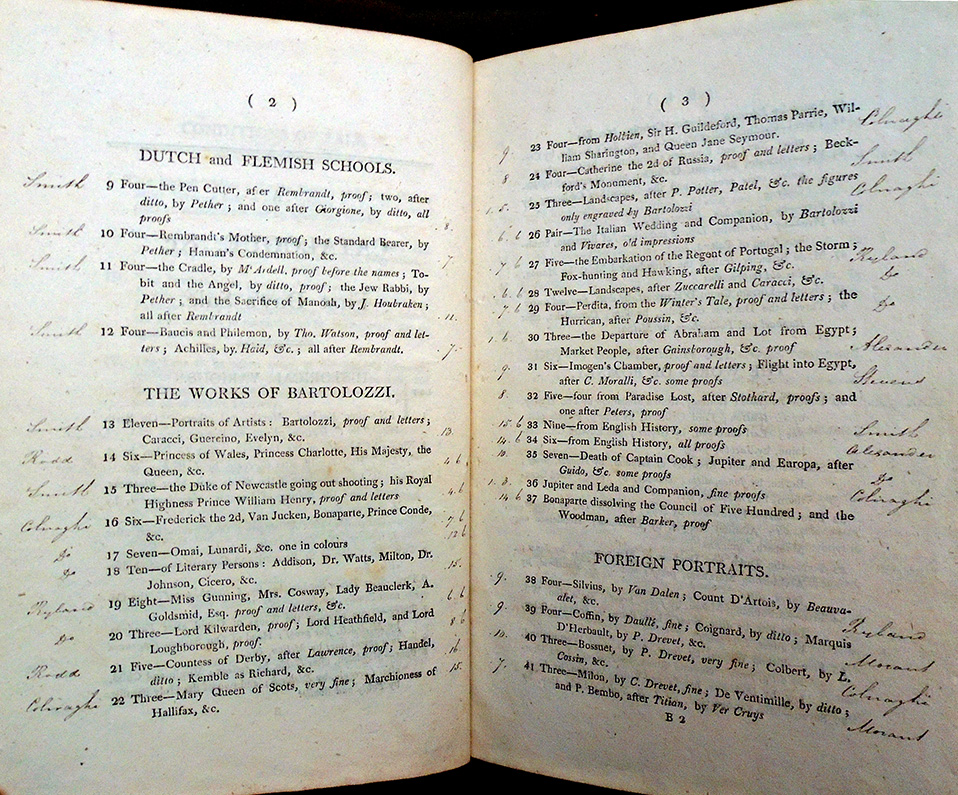 We all appreciate how useful it is to know who was doing the buying in the fine art print world at any given period and what they were paying. Annotated catalogues such as this help us follow the provenance of a particular engraving and provide a gage as to the strength and scope of the art world at the time. Of the three names that appear often in this sale, John White is too generic a name to be sure who is making these purchases but possibly J White (publisher/printer; British; 1801 – 1812; fl. c.) also known as J White & Co; Fleet Street, London, publisher, possibly the same as the John White in Tavistock St in 1789 [British Museum].

Thane was living at 24 Gerrard Street, Soho, London, and from here he published regular catalogues of his retail stock of prints. He was a friend of Joseph Strutt, engraver and antiquary, who lived for a time in Thane’s household; Thane published Strutt’s Regal and Ecclesiastical Antiquities of England in 1773. By 1781 Thane had moved to Rupert Street nearby, where he dealt in manuscripts, coins, and medals, becoming well known for his expert knowledge of these, besides pictures, and other objects of virtu as well as prints.

In 1781 he took on a second shop with the printseller Anthony Torre: they insured the contents of this ‘shop and the Warerooms communicating in the brick dwelling of Mr Greenwood auctioneer situate no. 28 Haymarket’ for £1000. The new outlet was probably dedicated to modern prints, for from about this time Thane became a significant publisher of contemporary pictures in stipple. He guided the formation of several notable print collections including that of the banker William Esdaile.

He himself was particularly interested in antique portraits and autographs. The collection of some 2000 portraits assembled by John Nickolls and sold at his death to Dr John Fothergill were sold at Fothergill’s death in 1780 to Thane for either £150 or 200 guineas (sources differ); he broke up the volumes and disposed of the portraits to the principal collectors of the time.”

The entire Colnaghi family seems to have participated in the print world as art dealers,

“established in England by Paul [Paolo] Colnaghi (1751–1833), who was born in the Brianza region near Milan, the younger son of Martino Colnago (d. 1783), a distinguished Milanese lawyer, and his wife, Ippolita Raggi. Having settled his father’s encumbered estate, Paul left Italy for France in 1783 and became the Paris agent of Antony Torre to sell English prints from a shop in the Palais Royal in 1784. Antony Torre was the son of Giovanni Battista Torre (d. 1780), who had established himself, first in London in 1753, then in Paris in 1760, as a maker of fireworks and instruments (principally barometers and thermometers) and bookseller. Antony ran a London branch at 14 Market Lane, Pall Mall, from 1767. On his father’s death, Antony entered briefly (1780–82) into partnership with an optician, Ciceri of Milan (who had employed Paul Colnaghi on his arrival in Paris), before asking Colnaghi, on Ciceri’s recommendation, to open his Paris branch….

In 1799 Paul Colnaghi moved his London premises to 23 Cockspur Street, where he held monthly 3 o’clock levees attended by the aristocracy and landed gentry. From these sprang a series of engraved portraits entitled Royal and Noble Ladies; Lawrence was paid £700 for permission to engrave his painting of Princess Charlotte (1817; Belgian Royal Collection). Appointed printseller to the prince regent, Colnaghi received further royal warrants from him as George IV, and from William IV; other royal patrons included the duc d’Orléans and the duc d’Aumale.” 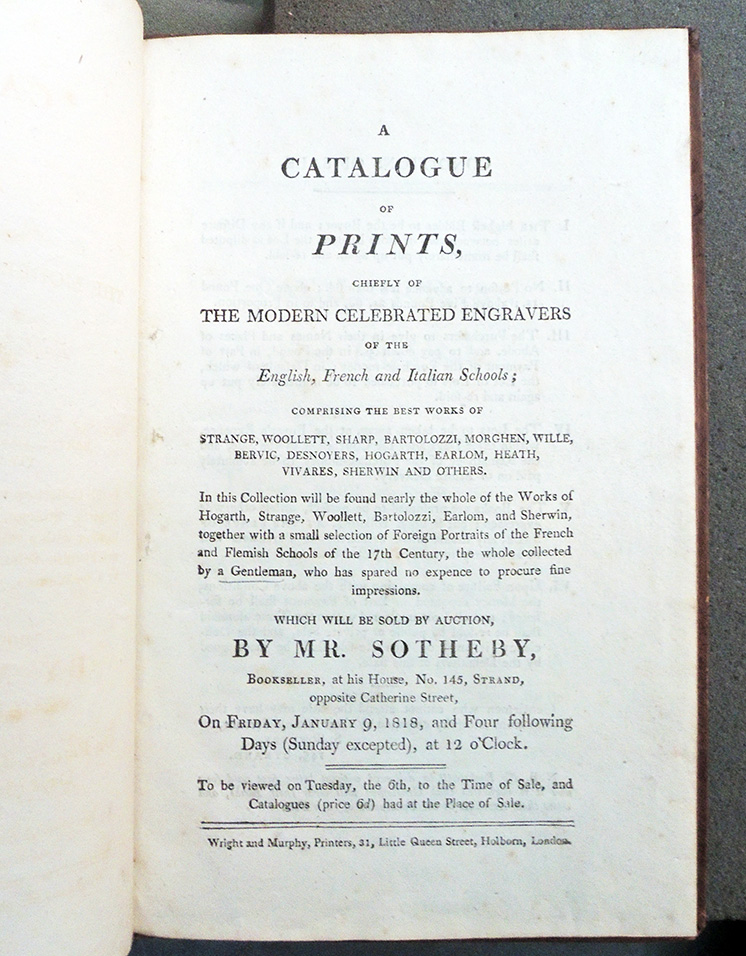 Samuel Sotheby, A Catalogue of prints, chiefly of the modern celebrated engravers of the English, French, and Italian schools; comprising the best works of Strange, Woollett, Sharp, Bartolozi, Morghen, Wille, Bervic, Desnoyers, Hogarth, Earlom, Heath, Vivares, Sherwin and others. … In this collection will be found nearly the whole of the works of Hogarth, Strange, Woollett, Bartolozzi, Earlom, and Sherwin, together with a small selection of foreign portraits of the French and Flemish schools of the 17th century, the whole collected by a gentleman, who has spared no expense to procure fine impressions. Which will be sold by auction, on Friday, January 9, 1818 (London: Wright and Murphy, printers, 1818). Manuscript names of buyers and prices for each lot. Graphic Arts Collection GAX 2019- in process