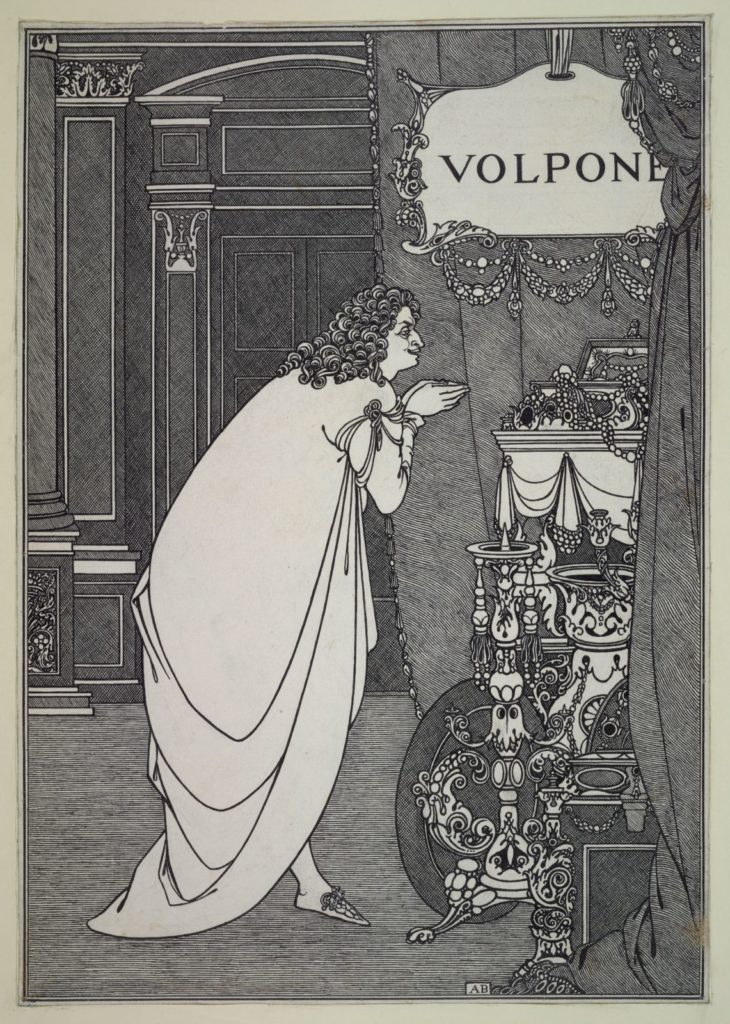 Ten drawings from Princeton University Library’s Aubrey Beardsley Collection, C0056, will be traveling to the exhibition Aubrey Beardsley on view at Tate Britain, London, from 4 March-25 May 2020. Among these are [above]: Aubrey Beardsley (1872-1898), Volpone Adoring His Treasure, pen and ink drawing, 1898. Published posthumously in Ben Jonson His Volpone, 1898. [Oversize » NE642.B363 J63, and four others]

Volpone was first brought out at the Globe Theatre in 1605, printed in quarto in 1607,  and was republished by Jonson in 1616 without alterations or additions.

“Beardsley appears to have been truly taken with Jonson’s play, writing F.H. Evans on 11 december: I am making pictures for Ben Jonson’s adorable and astonishing Volpone.” On the same day he informed Pollitt: “I carry Volpone about with me from dawn to dawn, and dream of nothing else.”The artist’s enthusiasm for the comedy is equally evident in his notes for the Volpone prospectus. “Daring and forcible in conception, brilliant and faultless in execution.” He writes, “It is undoubtedly the finest comedy in the English language outside the works of Shakespeare.” James G. Nelson, Publisher to the Decadents: Leonard Smithers in the Careers of Beardsley, Wilde, and Dowson (2010). 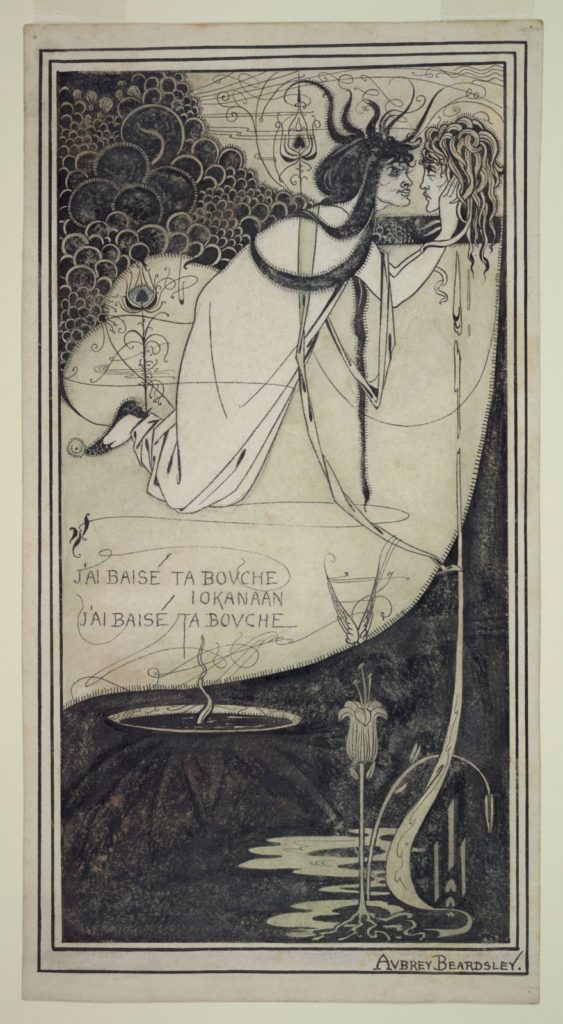 Also traveling to London will be [above] Aubrey Beardsley (1872-1898), Salomé with the Head of St. John the Baptist, ca. 1894. Pen and ink drawing. Although this was drawn to illustrate Oscar Wilde’s Salomé, it was not used. Aubrey Beardsley Collection, C0056, Department of Special Collections, Princeton University Library. 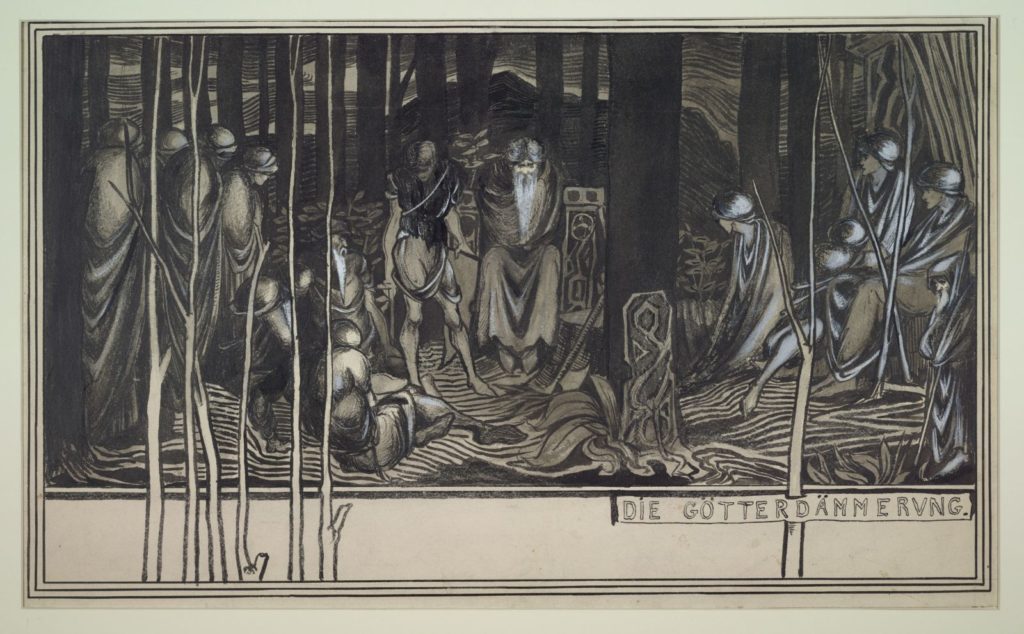 Götterdämmerung (Twilight of the Gods), is the last in Richard Wagner’s cycle of four music dramas titled Der Ring des Nibelungen (The Ring of the Nibelung, or The Ring for short). It received its premiere at the Bayreuth Festspielhaus on 17 August 1876, as part of the first complete performance of the Ring.

“Die Götterdämmerung,” notes Emma Sutton in Aubrey Beardsley and British Wagnerism in the 1890s (2002), “Beardsley’s only drawing of the concluding part of the Ring cycle, was probably prompted by the first performance for a decade of the Ring in London in June and July 1892. It is extremely likely that he attended a performance of the drama; he certainly attended Siegfried, and produced drawings on Siegfried and Götterdämmerung, and of the principle singers, in this year.

No interpretation of the drawing has, to my knowledge, ever been offered, perhaps because its stylistics might suggest that it is an incomplete or experimental, Impressionistic work. The drawing is, however, an intricate and highly knowledgeable representation of Wagner’s work, demonstrating Beardsley’s comprehensive knowledge of Die Götterdämmerung (and, indeed, of the whole cycle) from the very start of the decade. Beardsley presents the gods shrouded in long drapes in a bleak forest setting; with their elongated limbs and enveloping robes they appear androgynous figures, listless and melancholy, entrapped by the sharp bare stems that rise from the border and ground around them.

Despite the undulating lines of the landscape, Die Gotterdammerung is a scene of desolate stasis, bleakly portraying Wagner’s Twilight of the Gods. A compression of several scenes from Wagner’s drama, the drawing is, I would suggest, an extraordinarily innovative and ambitious attempt to evoke concisely the narrative events and cumulative tone of the entire drama.”
–Emma Sutton, Aubrey Beardsley and British Wagnerism in the 1890s (2002)

Tate Britain calls this the largest exhibition of Beardsley drawings for 50 years. “Aubrey Beardsley shocked and delighted late-Victorian London with his sinuous black and white drawings. He explored the erotic and the elegant, the humorous and grotesque, winning admirers around the world with his distinctive style. Spanning seven years, this exhibition will cover Beardsley’s intense and prolific career as a draughtsman and illustrator, cut short by his untimely death from tuberculosis, aged 25. Beardsley’s charismatic, enigmatic persona played a part in the phenomenon that he and his art generated, so much so that Max Beerbohm dubbed the 1890s the ‘Beardsley Period’.” https://www.tate.org.uk/whats-on/tate-britain/exhibition/aubrey-beardsley