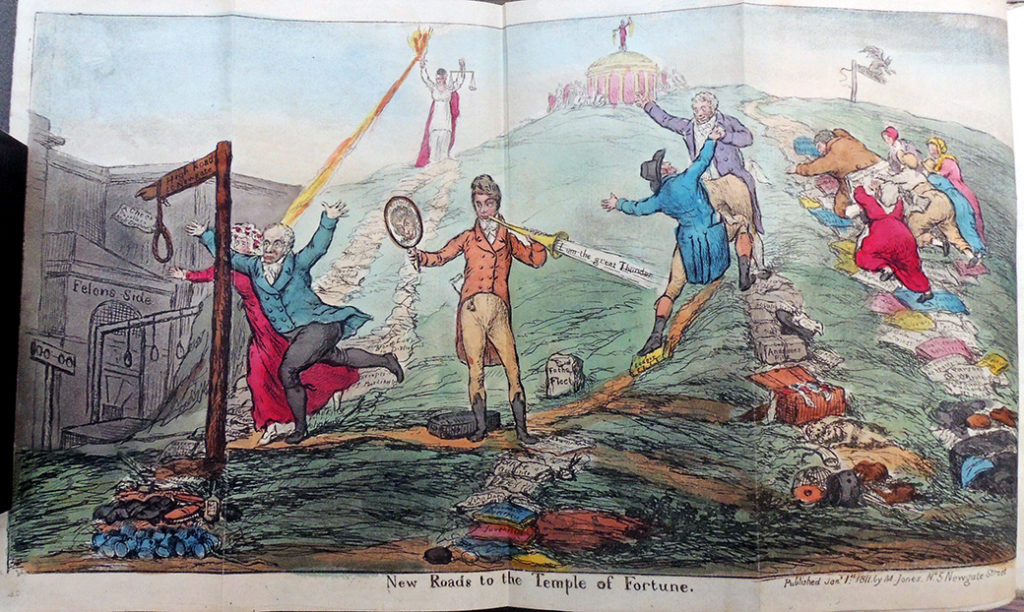 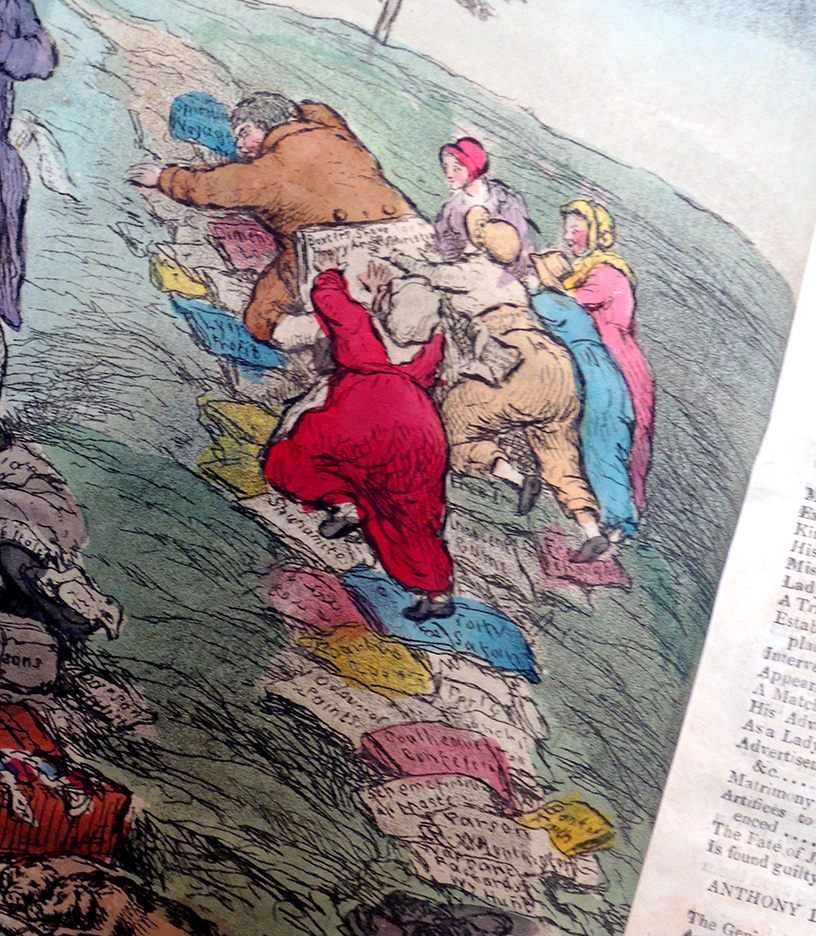 When it began, The Scourge or Monthly Expositor of Imposture and Folly specialized in exposing patent medicines, with a chart of fakes in each issue. Each issue had a folding plate, a hand colored etching, that served as illustrations to various articles, only later evolving to single theme political caricature. The plates in the first volume were all by Samuel De Wilde, known for his theatrical portraits exhibited at the Royal Academy from 1792 until 1821. Later issues include plates by George Cruikshank, Charles Williams, and others.

The First Series was published in 66 monthly numbers 1811 to 1816, bound with a yellow pictorial wrappers. Volumes 1-2 were published by the unidentified M. Jones at 5 Newgate Street and sold by J. Johnston, Cheapside and Goddard, Pall Mall. Beginning with volume 3,William Naunton Jones took over as publisher from the same address. The magazine’s title was altered with volume 7 to The Scourge or Literary, Theatrical, and Miscellaneous Magazine. The Graphic Arts Collection is fortunate to hold a complete set. 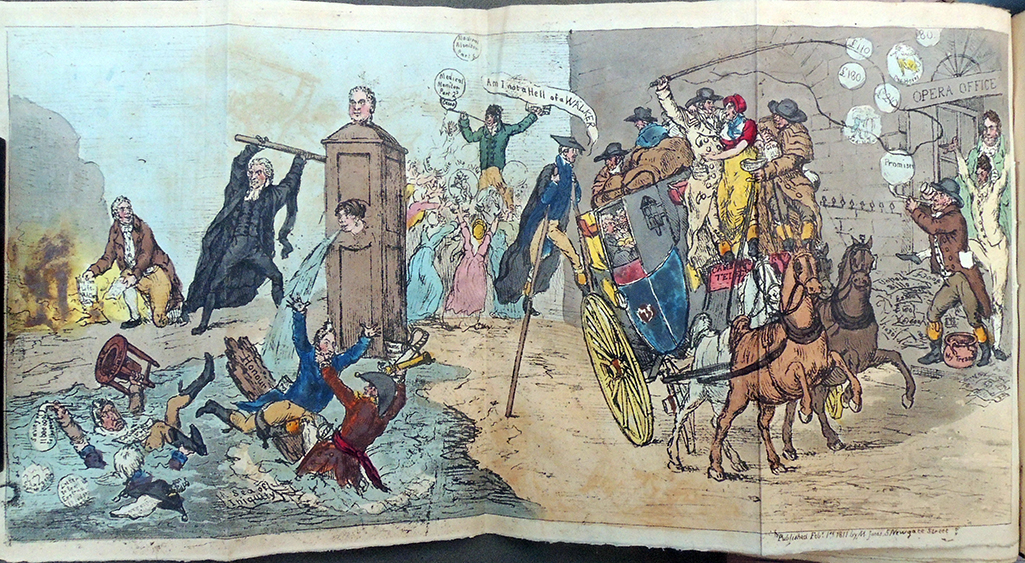 “Our Artist has omitted the title of the Caricature, which ought to be MERE BUBBLES.” 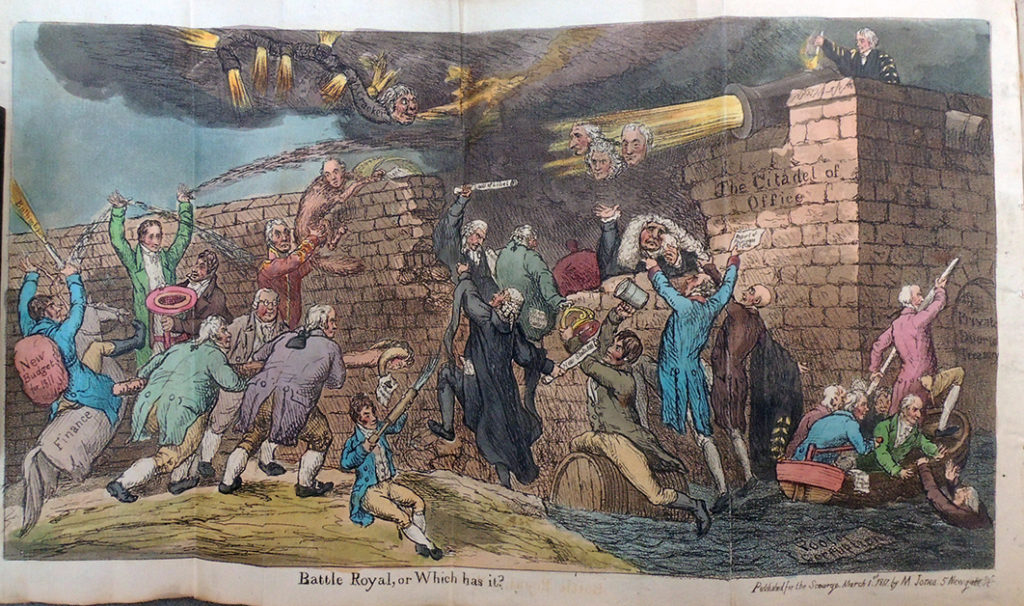 March 1811
Samuel De Wilde (1751-1832), “Battle Royal, or Which Has It” in The Scourge or Monthly Expositor of Imposture and Folly v.1, before p. 175 (London: M Jones, March 1, 1811).
A satire on the hopes of the Opposition that the Prince would dismiss the Perceval Ministry on the establishment of the Regency. 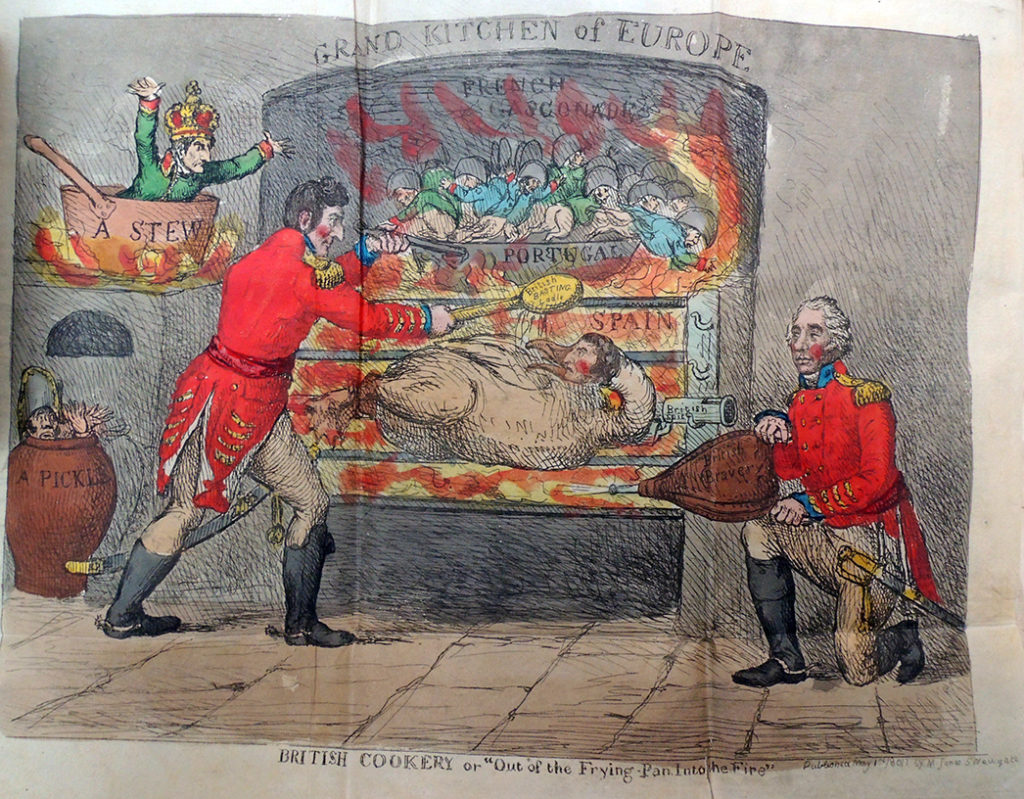 May 1811
Samuel De Wilde (1751-1832), “British Cookery or ‘Out of the Frying-Pan into the Fire’” in The Scourge or Monthly Expositor of Imposture and Folly v.1 (London: M Jones, May 1, 1811). The plate is explained; “That Ney should be in a pickle and Buonaparte in a stew John Bull will think very natural. General Graham . . . [gives] new vigor to the flame of patriotism.” The spitted goose is Massena. 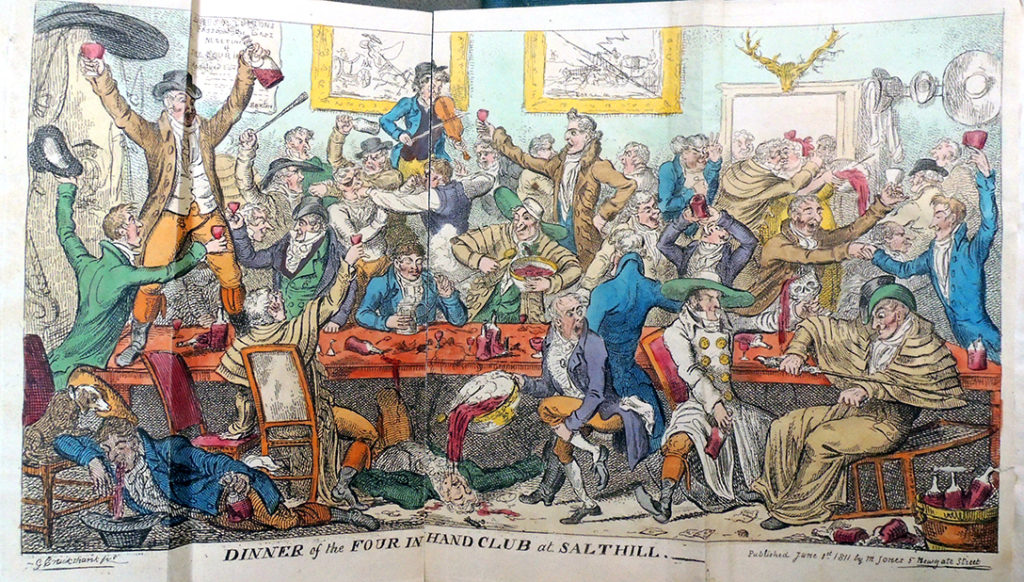 June 1811
George Cruikshank (1792-1878), “Dinner of the Four in Hand Club at Salthill” in The Scourge or Monthly Expositor of Imposture and Folly, v.1, before p. 431. (London: M Jones, June 1, 1811). Illustration to an article ‘The Dinner at Salt Hill’ in The Satirist, March 1, 1811. The Four-in-hand Club met in Cavendish Square, seven members only. The president was C. Buxton (probably Charles, 1787-1817). There is a second state, with the title Bang-up Dinner or Love and Lingo, a frontispiece to Lexicon Balatronicum, A Dictionary of Buckish Slang University Wit, and Pickpocket Eloquence, compiled originally by Captain Grose . . .’, 1811.

October 1811
George Cruikshank (1792-1878), “The Examination, of a Young Surgeon” in The Scourge or Monthly Expositor of Imposture and Folly, v.2, before p. 263 (London: M Jones, October 1, 1811). The plate illustrates ‘Medical Science Exemplified’, pp. 263-8, ridiculing the education and examination of surgeons with special reference to two Scottish examiners, clearly David Dundas and Everard Home, both Serjeant-surgeons to the King.

November 1811
George Cruikshank (1792-1878), “Interior View of the House of God” in The Scourge or Monthly Expositor of Imposture and Folly, v.2, before p. 349 (London: M Jones, November 1, 1811). A savage account of Carpenter, a paper-maker of Neckinger House, appeared in the August number of The Scourge v.2. 94-102. The ‘tickets’ must be the half-sheets signed and sealed by Joanna Southcott, by which the faithful were ‘sealed’ or certificated for the millennium. 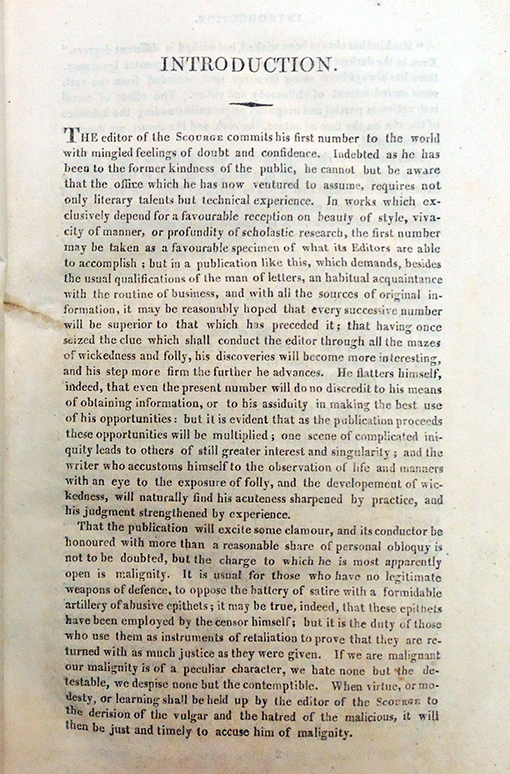 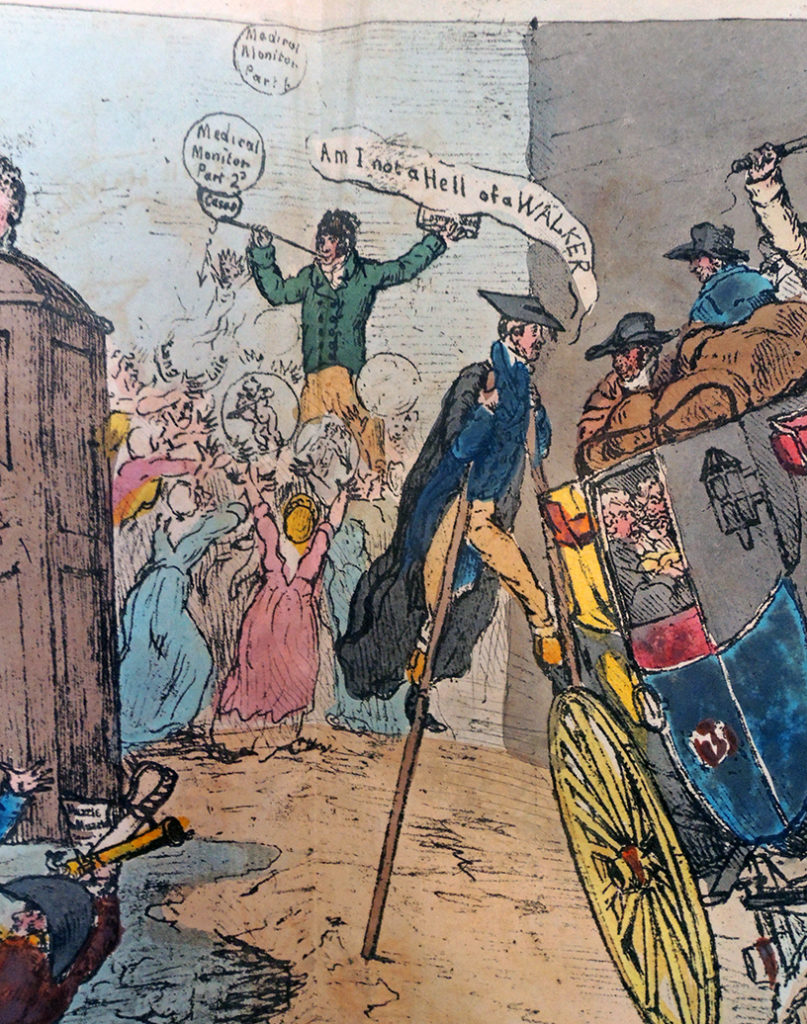 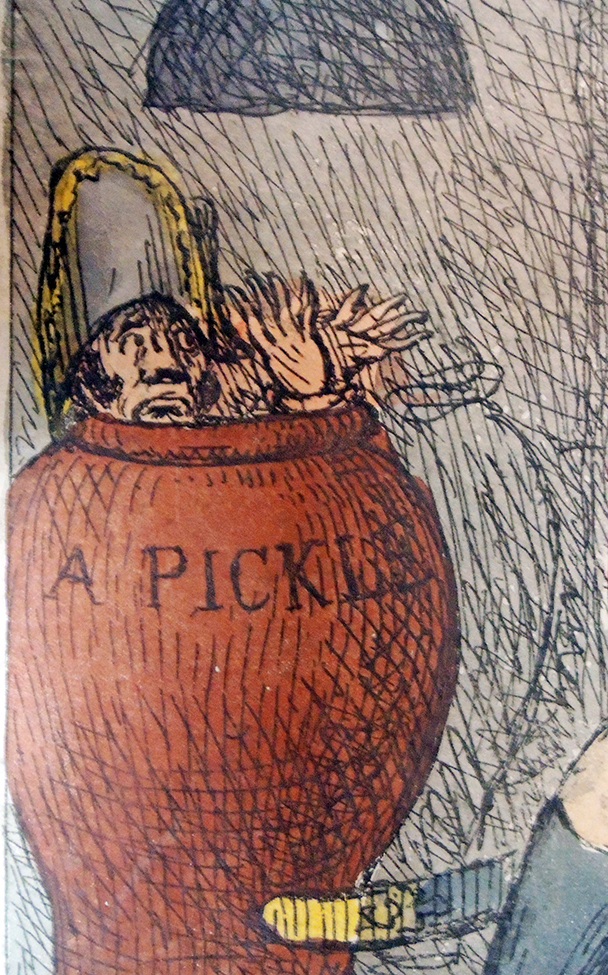 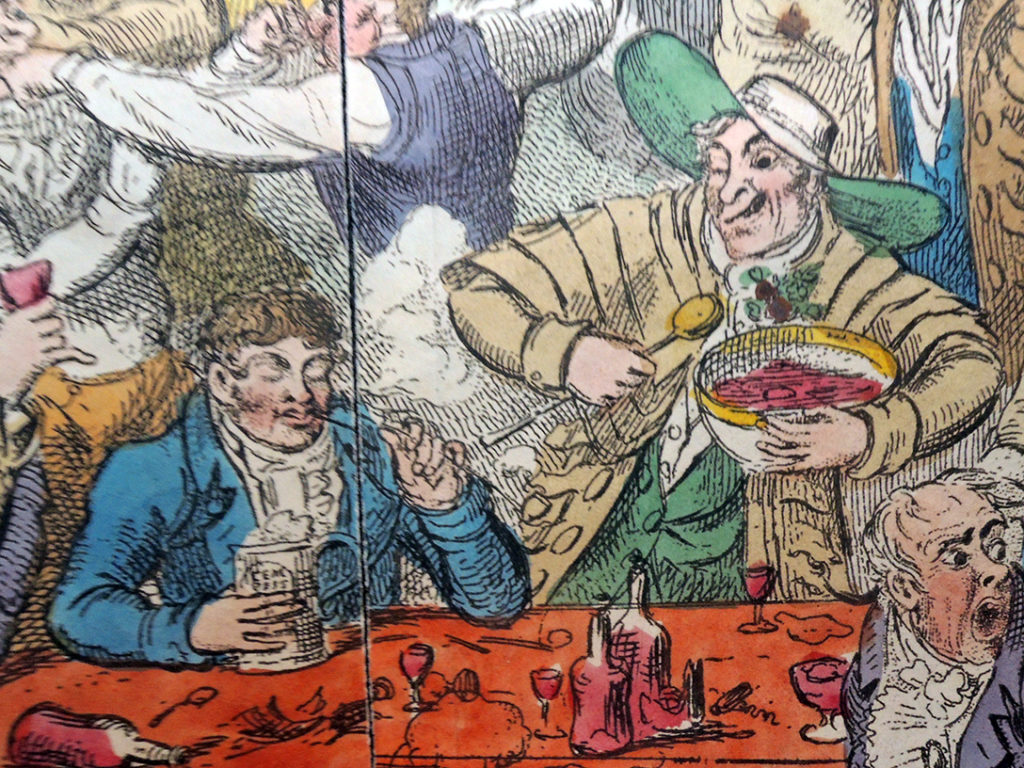 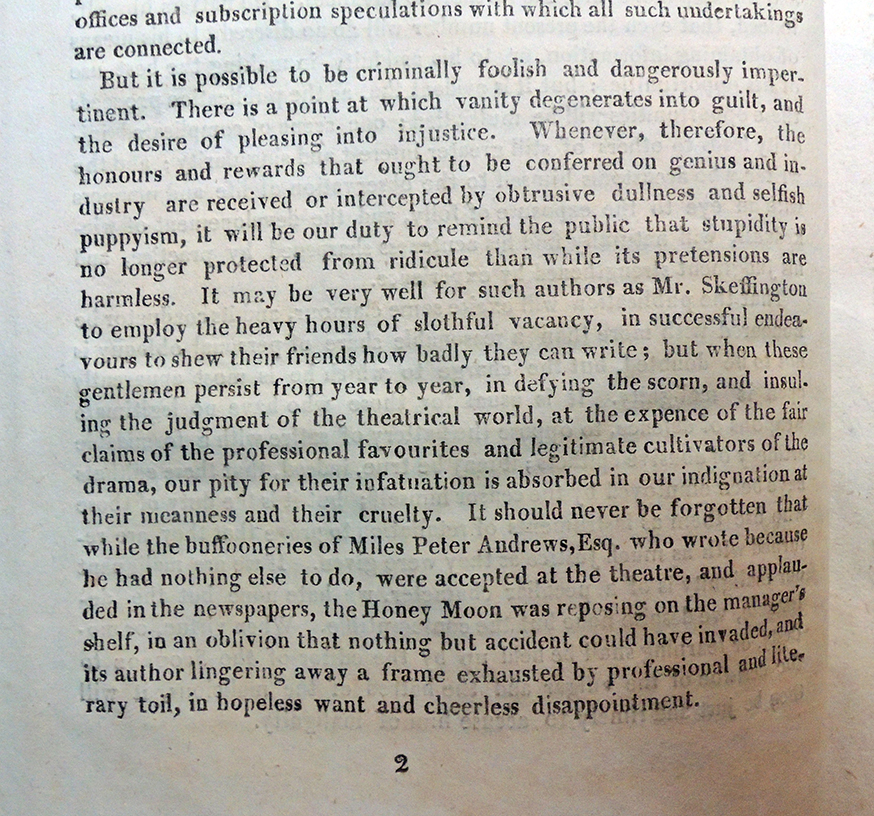