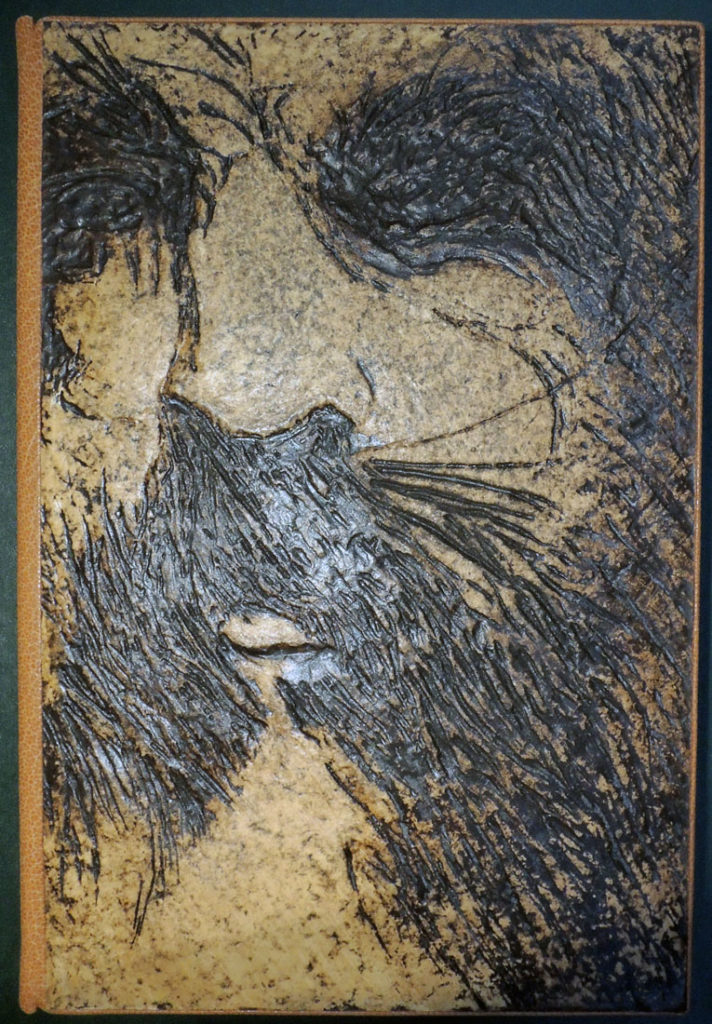 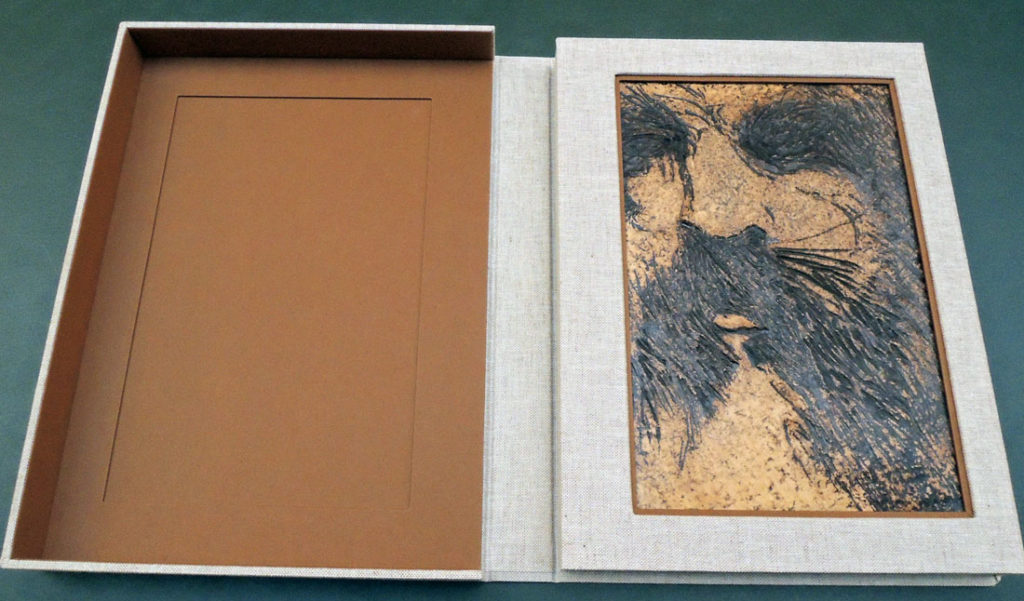 Thistles and Thorns: Abraham and Sarah at Bethel: [poem] by Paul Smyth; with wood engravings by Barry Moser (Omaha: Abattoir Editions, University of Nebraska at Omaha; printed by Harry Duncan, 1977). One of 5 copies bound by Dan Kelm in chestnut morocco, upper cover onlaid with a molded, relief portrait of Abraham; housed in a tray case which acts as a frame for the binding cover; tipped in note signed by binder. Recap GAX 33945740

It is hard to know where to begin when describing Thistles and Thorns, with text by the Massachusetts poet Paul Smyth (1944-2006) and wood engravings by Tennessee-born Barry Moser, printed by Harry Duncan (1916-1997) at his Omaha fine press, Abattoir Editions. Each are distinguished artisans in their own fields.

The Graphic Arts Collection holds one of only five copies of the book bound in a remarkable structure designed and constructed by Daniel E. Kelm, beginning with the cover image after a Moser wood engraving of Abraham, cast in paper from a clay relief by Elizabeth Solomon. The volume is housed in custom folding cloth box with paper spine label, simple on the outside and extraordinary when it is opened. This video shows Kelm demonstrating a few bindings on May 29, 2015 at Wide Awake Garage in Northampton, MA. This clip should begin with Thistles and Thorns, but it is worth watching the whole interview.

“Daniel E. Kelm is a book artist who enjoys expanding the concept of the book. He is known for his innovative structures as well as his traditional work. His expression as an artist emerges from the integration of work in science and the arts. Alchemy is a common theme in his book work. Before Daniel began his career in the book arts he received formal training in chemistry and taught at the University of Minnesota. He is known for his extensive knowledge of materials.
switched to an electric model.” = http://www.danielkelm.com/core/wideawake/3/1

Claire Owen, Gabriel’s family (Philadelphia: Turtle Island Press, 1992). Graphic Arts Collection Z232.T87 O93
“Claire Owen wrote the story and etched the plates … The design … was a collaboration between Owen and Daniel Tucker. The book was set in Baskerville type, with Centaur used for the titles … The type and the plates were printed letterpress by Arthur Larson at Horton Tank Graphics. The binding in Chieftan leather was designed by Daniel Tucker and completed by Daniel Kelm … at the Wide Awake Garage … fifty-two copies numbered 1/52-52/52 and four Artist’s Proofs signed I/IV-IV/IV.”

An only kid, monoprints by Mikhail Magaril ([New York City]: Kuboaa, 1998). Cotsen Children’s Library, Folios 87784
“Printed in an edition of 18 signed & numbered copies by Russell Maret at Kuboaa, New York City. The text type is Centaur, designed by Bruce Rogers, printed on Rives de Lin paper. Each copy has eleven monoprints & one matrix transfer drawing by Mikhail Magaril. The sewn-board binding was designed & executed by Daniel Kelm, with a leather spine & cover paper hand-made by Timothy Barrett, housed in a drop-spine box made by the printer.”–Colophon.

Ligoranno/Reese, The Corona palimpsest (New York: Granary Books.com, 1996). Graphic Arts Collection Oversize Z232.G75 L53q
“‘The Corona palimpsest’ takes its name from the video/book installation made by Ligorano/Reese and which debuted at the Cristinerose Gallery in New York City in October, 1995. The collages come from a variety of sources: newspapers, art history books and magazines. They were printed by Joe Elliot and Anne Noonan at Soho Letterpress. The artists hand painted the book using stencils and paste paper methods. The text paper is 120 gram Arches text laid. The stills are from the video component of the installation, printed offset on Yu-jade … Daniel Kelm bound the edition at the Wide Awake Garage”–Colophon.

Altar book for Górecki: the Symphony of sorrowful songs by Henryk Górecki; lyrics in Polish and English translation (Middletown, CT: Robin Price, Publisher, 1996). Graphic Arts Collection Oversize Z232.P95 A47q
“Inspired by the 1992 recording of Henryk Górecki’s Symphony no. 3 … The bird illustrations are from seventeenth-century copperplate engravings by Francis Willughby. Photographed by John Wareham, the illustrations were digitally adapted and made into polymer plates by Gerald Lange. The woodcut was designed and carved by Keiji Shinohara. Paul Shaw provided calligraphy of the Polish lyrics. The typefaces are Guild Samson uncial & Perpetua, printed onto hand-stained Wahon paper. Daniel Kelm provided consultation on the triptych structure; box design & construction is by Franklin Nichols Woodworking”–Colophon.

Bunny Burson, Hidden in plain sight (St. Louis: Bunny Burson, 2015). Graphic Arts Collection, Q-000120
“Designed and printed at Emdash Studio in St. Louis, by Ken Botnick, and bound by Daniel Kelm at Wide Awake Garage in Easthampton, Massachusetts, in an edition of 27 copies. Issued in a black cloth-covered clamshell case with etchings of the front and back of an envelope attached to the front and back of the case.

Ken Botnick, Diderot project ([St. Louis, Mo.]: Emdash, 2015). Graphic Arts Collection 2015-0147Q
“This edition was completed during the January thaw of 2015 in our print shop in the Pierce Arrow Building, St. Louis, and is the work of Ken Botnick, editor, author, designer, printer and publisher. … The edition is bound by Daniel Kelm at the Wide Awake Garage, Easthampton, Massachusetts … All texts from the Encyclopedia are set in Walbaum Book ..”–Colophon.

Robert Bringhurst, The fragments of Parmenides & an English translation; wood engravings by Richard Wagener (Berkeley [Calif.]: Editions Koch, 2003). Graphic Arts Collection Oversize 2007-0073F
“This edition … was designed by Peter Koch and printed by hand … at Peter Koch Printers …There are 146 copies in all. The wood engravings were printed by the artist … Christopher Stinehour designed the Diogenes Greek in digital format at his stonecutting studio in Berkeley. Dan Carr designed and cut the Parmenides Greek by hand in steel, struck and justified the matrices and cast the type at the Golgonooza Letter Foundry. 120 numbered copies were bound by Peggy Gotthold in quarter leather … Twenty-six copies, lettered A to Z, were bound in full leather by Daniel Kelm.”–Colophon.

Mark Twain, The jumping frog. The private printing [i.e. history] of the “Jumping frog” story : an afterword by Samuel Clemens (Easthampton [Mass.]: Cheloniidae Press, 1985. Graphic Arts Collection L-000028
” … from “Mark Twain’s sketches, new and old, as it was first published in complete form, 1875, the American Publishing Co. … 325 copies of the book were printed by Wild Carrot Letterpress. The fifteen wood engravings were printed … by Harold McGrath.”–Colophon. Bound by Daniel Kelm in full undyed Oasis with onlays of the frog in repose before the jump on the front panel and after the jump on the back panel, with doublures showing the frog in midjump.

Thistles and thorns: Abraham and Sarah at Bethel: [poem] by Paul Smyth; with wood engravings by Barry Moser (Omaha: Abattoir Editions, University of Nebraska at Omaha, 1977. Graphic Arts RECAP-33945740
One of 5 copies bound by Dan Kelm in chestnut morocco, upper cover onlaid with a molded, relief portrait of Abraham; housed in a tray case which acts as a frame for the binding cover; tipped in note signed by binder. 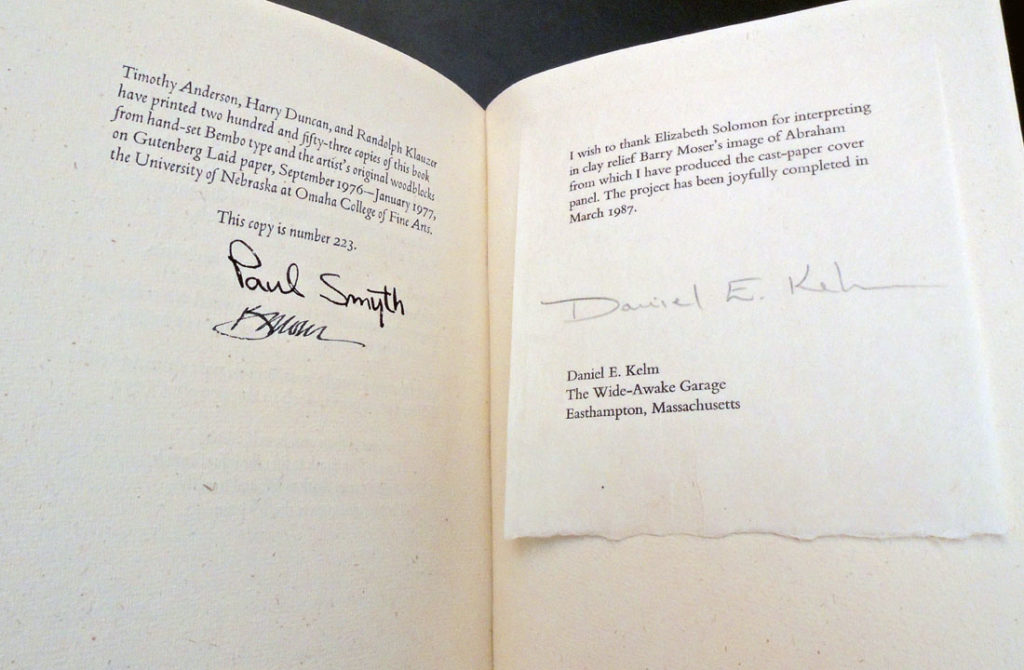 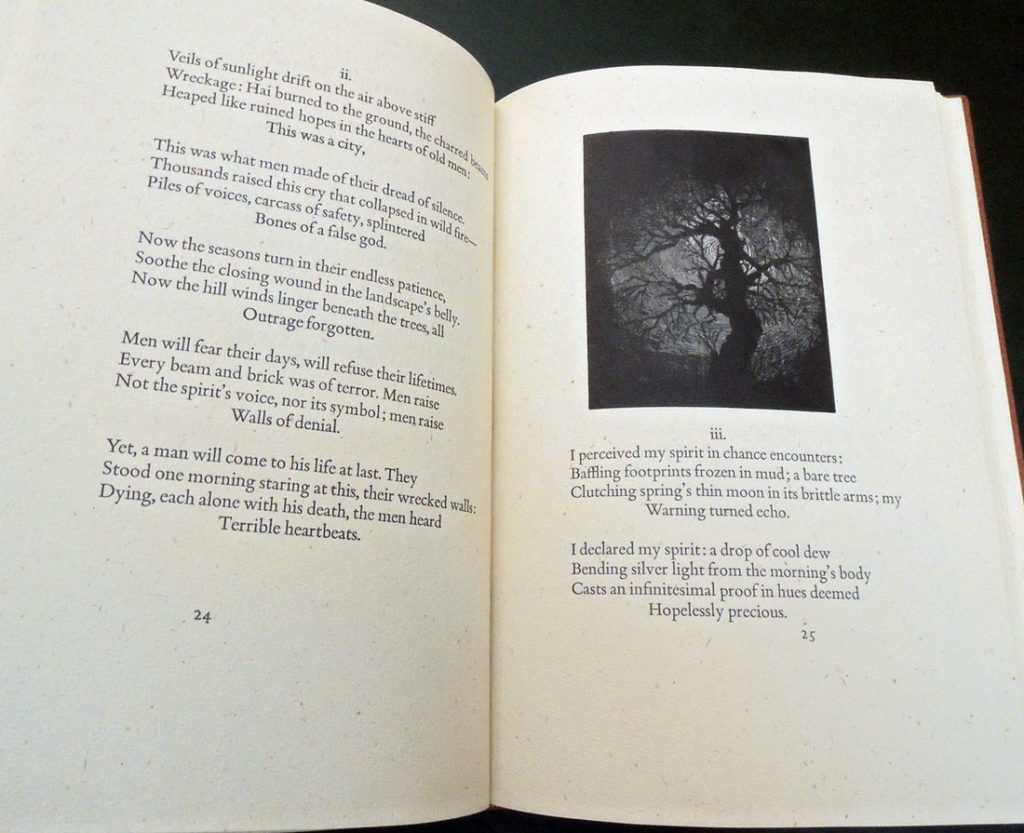 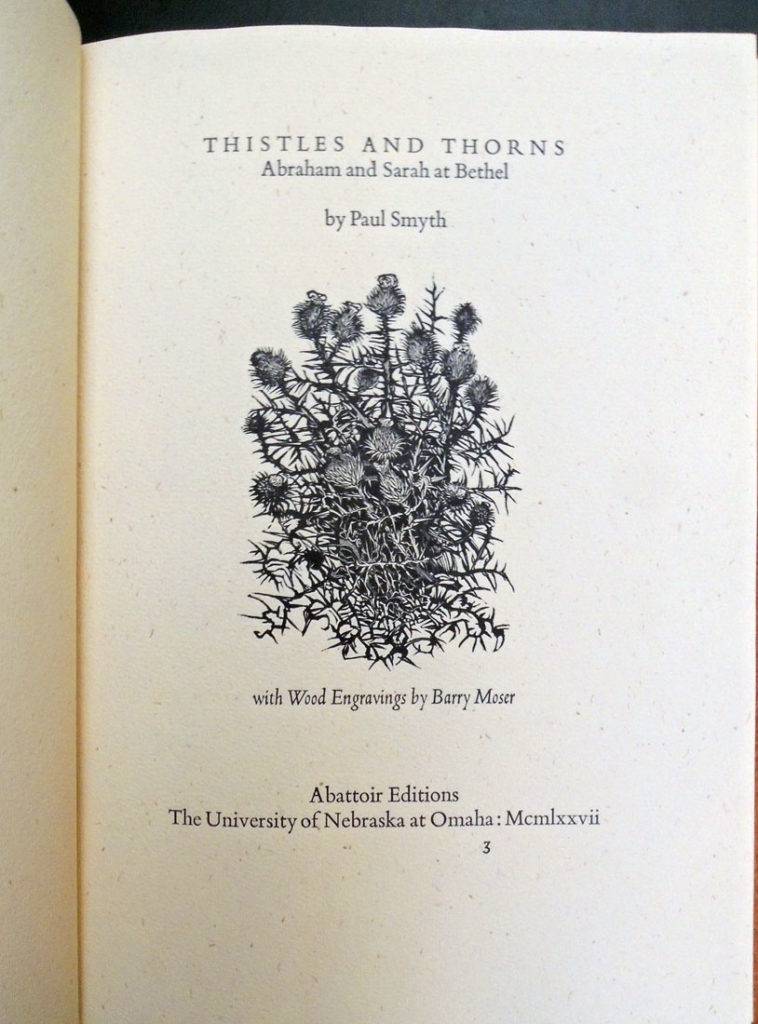