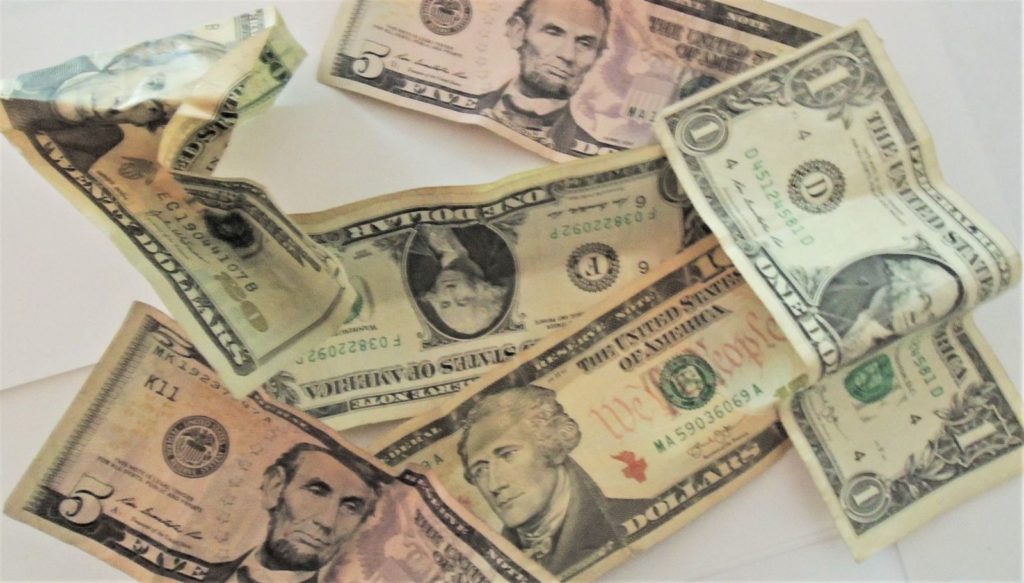 Questions:
1. Whose portrait is hidden in the $20 note?
2. How many number 5’s are on the $5 note?
3. Which bill cannot be redesigned, thanks to a recurring provision in the annual Financial Services and General Government Appropriations Act?
4. Which denomination came first?
5. What happened to the Harriet Tubman $20? 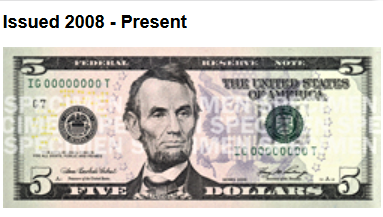 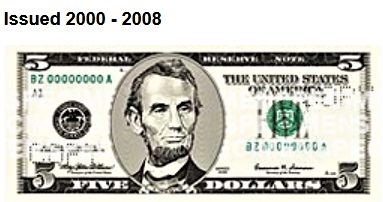 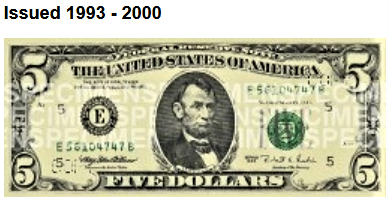 Since 1929, United States has attempted to standardize the design of its paper currency while still allowing denominations to have their own icons, portraits, and security features as well as a distinct character in colors, textures, and watermarks.

Did you know there are two sides to the Great Seal on the $1 note? One side, the reverse, features the pyramid and the floating eye, called the Eye of Providence. This design is located on the left of the banknote. The other side of the Great Seal features the bald eagle holding the olive branch and exactly 13 arrows. And there are thirteen vertical stripes on the shield and thirteen stars in the constellation above the eagle. President Franklin D. Roosevelt switched the placement of elements, so he is responsible for putting the unfinished pyramid (with 13 steps) on the left side of the banknote.

© =Federal law permits color illustrations of U.S. currency only under the following conditions:
The illustration is of a size less than three-fourths or more than one and one-half, in linear dimension, of each part of the item illustrated; the illustration is one-sided; and all negatives, plates, etc. are destroyed and/or deleted after their final use. 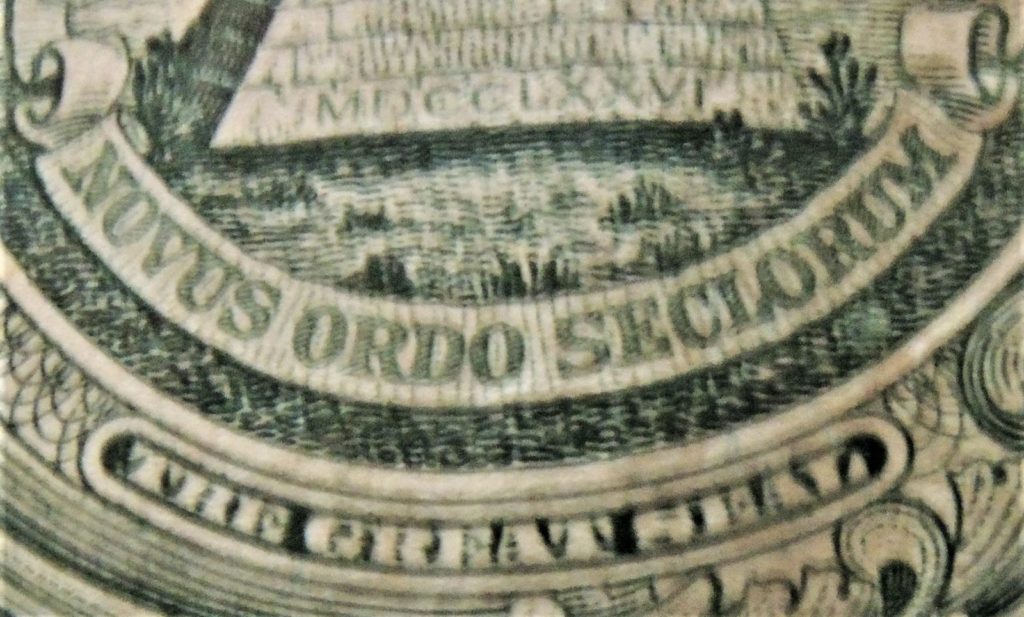 The phrase Novus ordo seclorum (= New order of the ages) is the second of two mottos that appear on the reverse of the Great Seal of the United States. The first motto is Annuit cœptis (= Providence favors our undertakings or Providence has favored our undertakings) 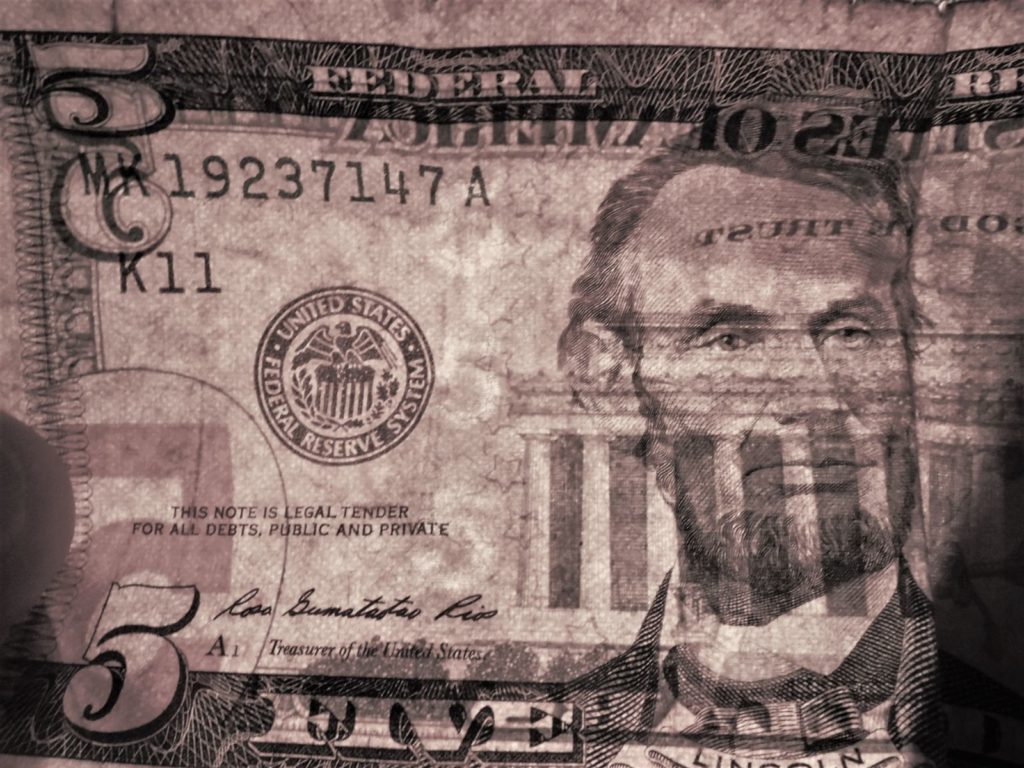 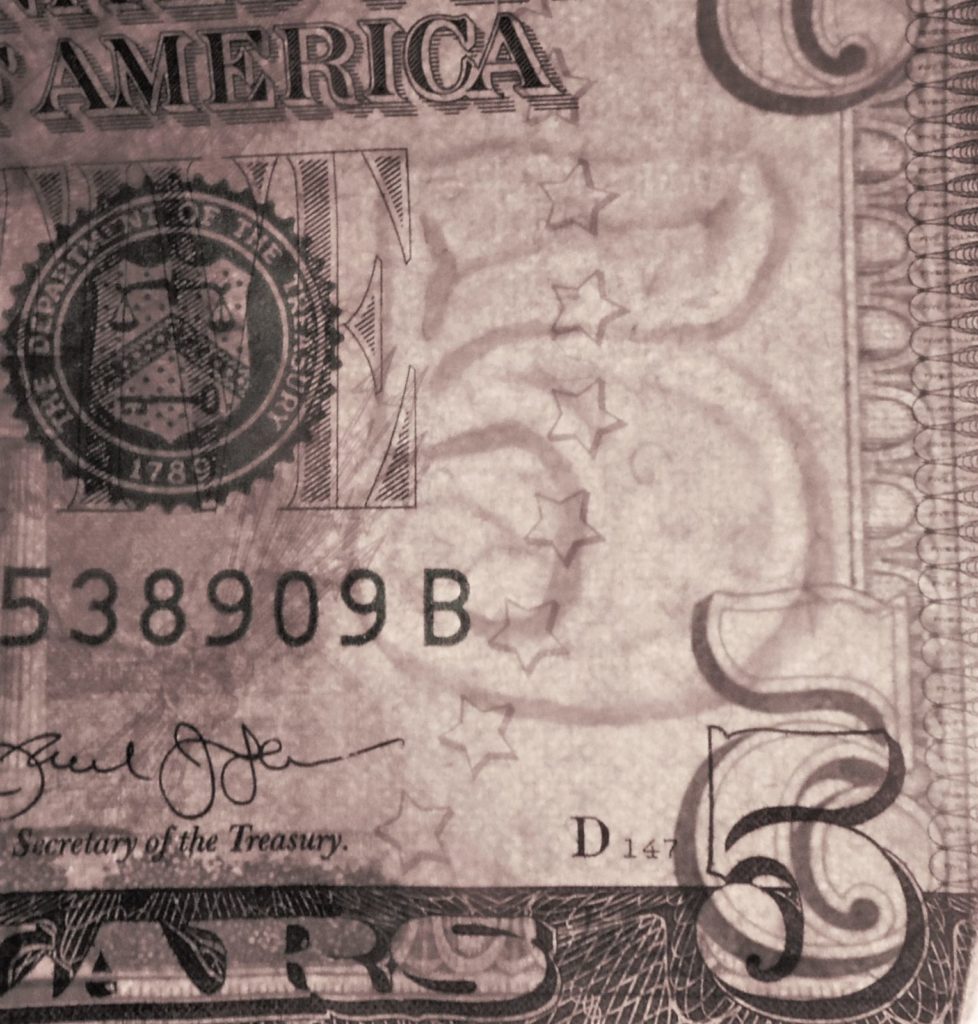 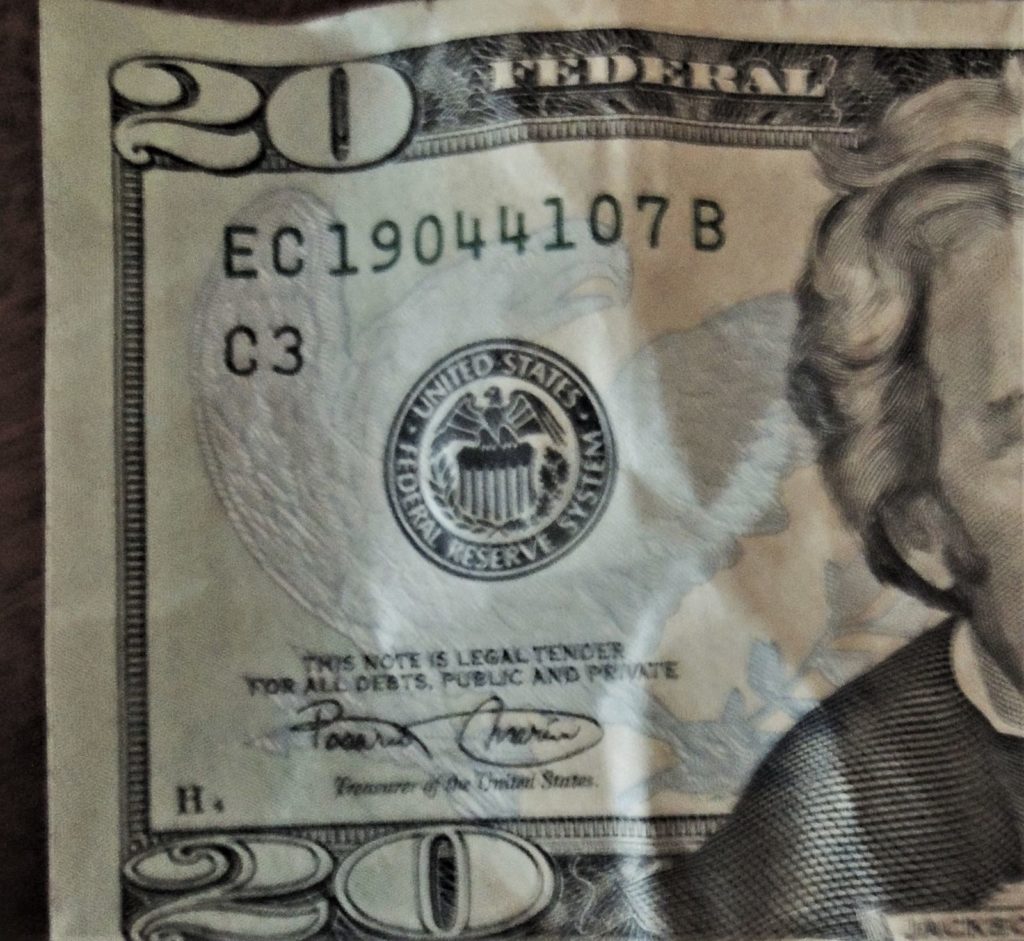 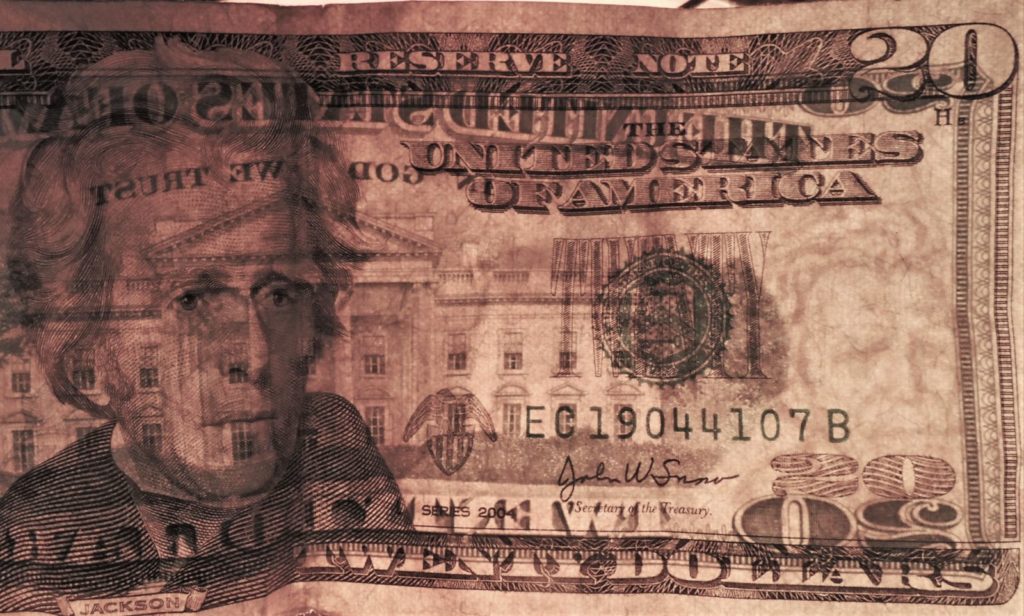 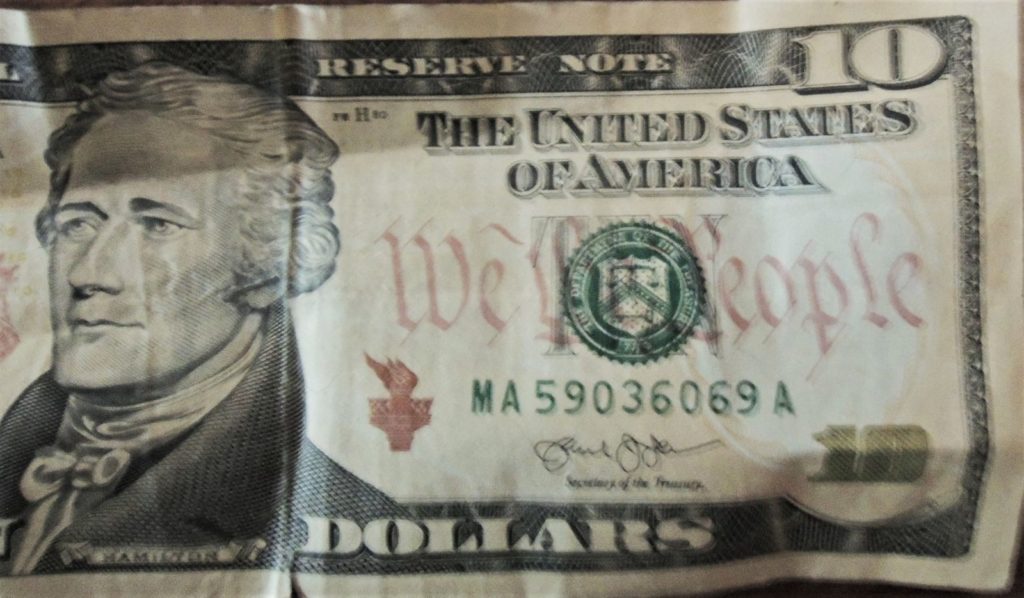 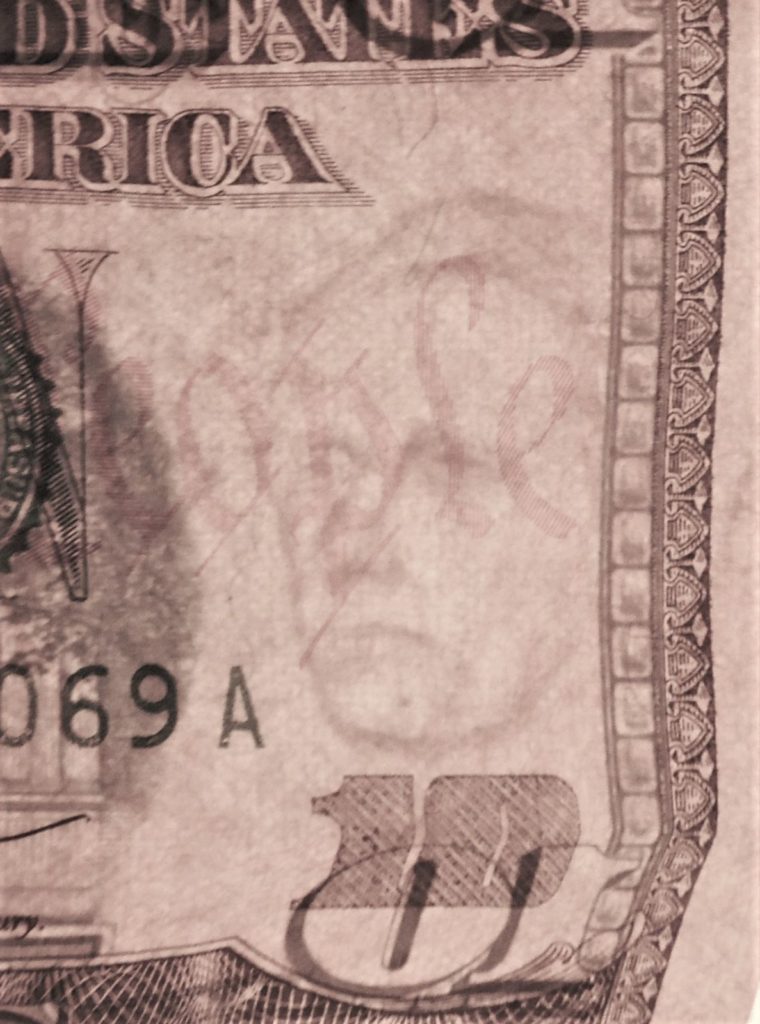 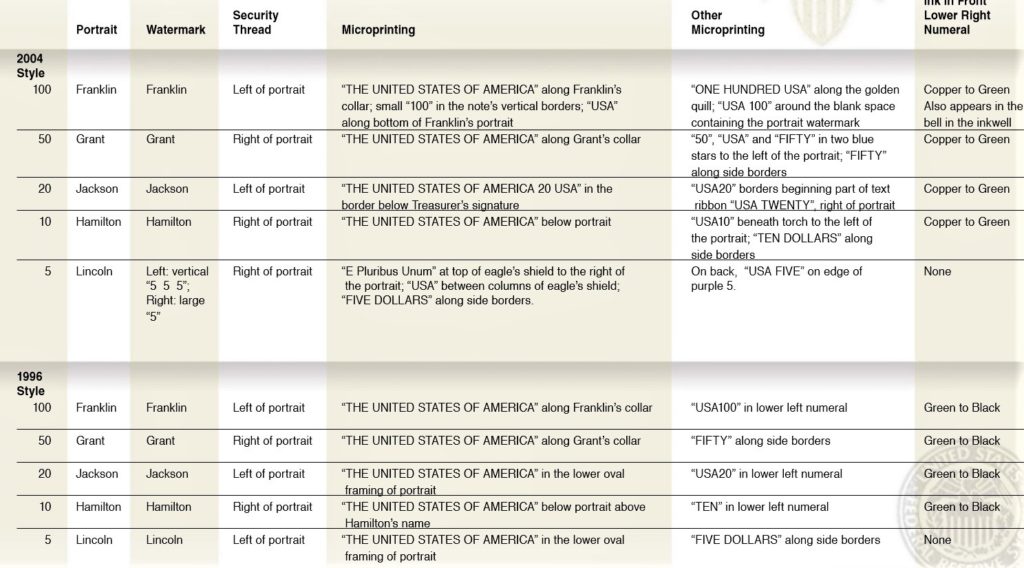 Answers:
No. 1: In 2003, the $20 note was redesigned to include an embedded security thread that glows green when illuminated by UV light. In addition, a portrait watermark of President Jackson is visible from both sides of the note. Finally, the note includes a color-shifting numeral 20 in the lower right corner of the note. An Alexander Hamilton portrait watermark is visible on the $10 note. The portrait of Lincoln was removed from the watermark of the $5 note.

No. 2: Not counting digits in the changing serial numbers, there are 10. Be sure to count the three 5’s watermarked in a vertical pattern on the left and one large 5 embedded in the paper on the right.

No. 3: The $1 note remains the same since the note was issued in 1963. “The United States government redesigns Federal Reserve notes primarily for security reasons: to stay ahead of counterfeiting threats and keep counterfeiting levels low. Because the $1 note is infrequently counterfeited, the government has no plans to redesign this note. In addition, there is a recurring provision in the annual Financial Services and General Government Appropriations Act that prohibits the redesign of the $1 note.”

No. 4: On June 25, 1776, the Continental Congress authorized issuance of the $2 denominations in “bills of credit” for the defense of America.

No. 5: All plans are on hold. Read the whole story here: https://www.thedailybeast.com/what-happened-to-the-plan-to-put-harriet-tubman-on-the-dollar20-bill 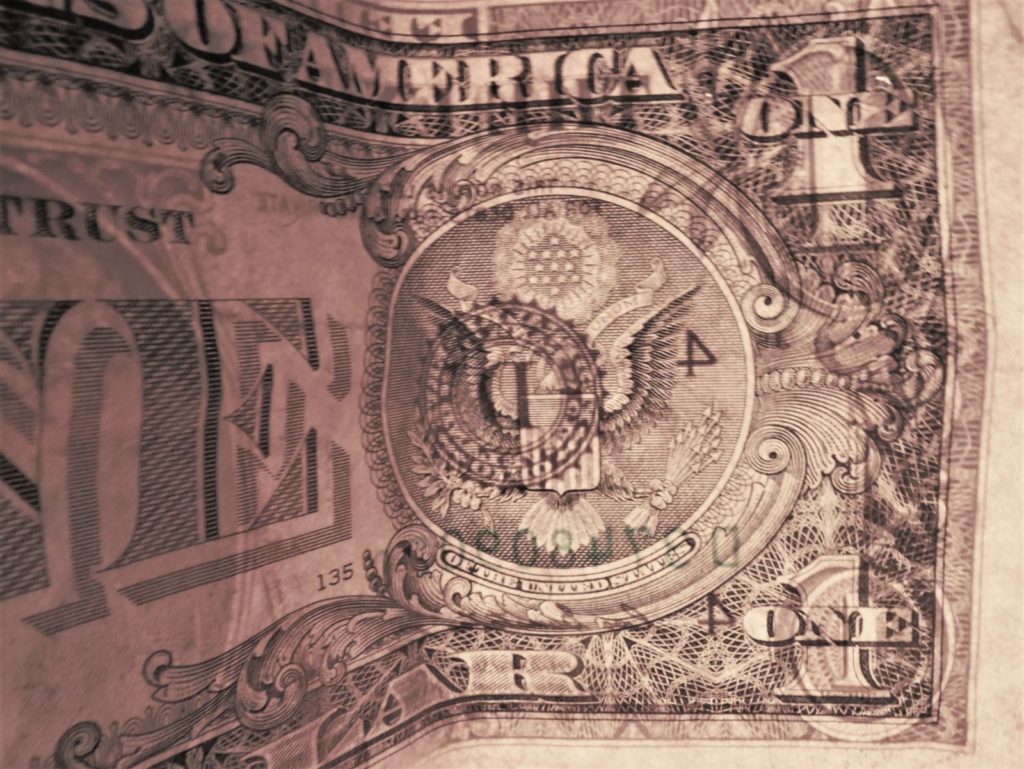