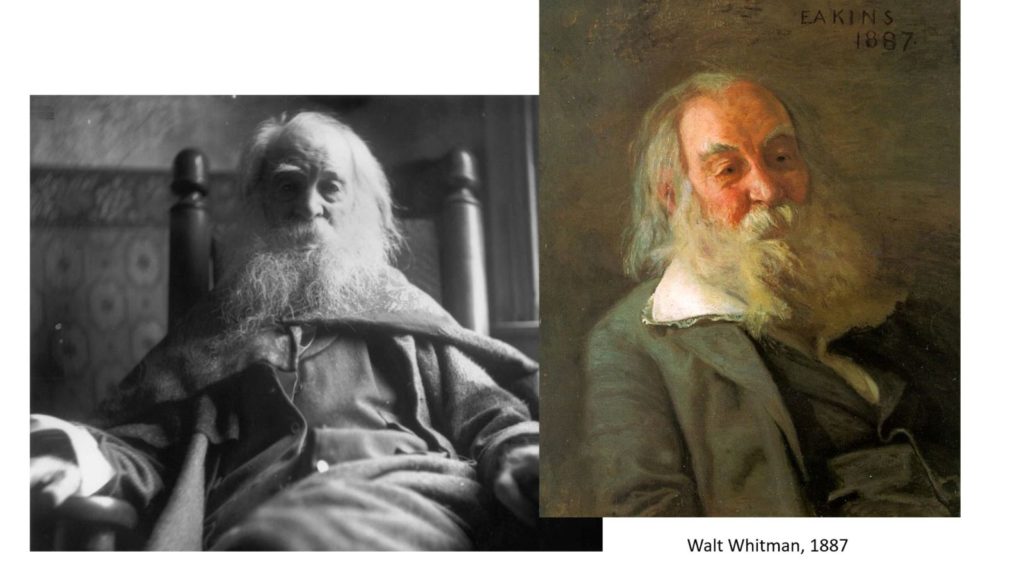 “Thomas Eakins and the Making of Walt Whitman’s Death Mask,” will be the second in a series of live webinars highlighting Special Collections in Firestone Library, Princeton University. Please join Julie Mellby, Graphic Arts Curator, and Karl Kusserow, John Wilmerding Curator of American Art, at 2:00 on Friday, June 26, 2020, as we focus on two American pioneers in art and literature. The event is free and open to all, but please register here for the zoom invitation: Register

During the last five years of Walt Whitman’s life, Thomas Eakins was a frequent guest at the poet’s Camden, New Jersey, home where Whitman agreed to sit for an oil portrait. Eakins’ protégé Samuel Murray often joined them, photographing Whitman in preparation for a sculpted bust. On the day Whitman died, March 26, 1892, Eakins and Murray gathered all the necessary supplies to cast his face in plaster and early the next morning crossed the Delaware River, walking the final blocks to 330 Mickle Street. At least three death masks survive from the matrix they produced that day, one preserved at the Princeton University Library.

That Whitman and Eakins were similar in temperament and talent is well documented. Their lives intertwined not only in the creation of American masterworks, but in the critical scorn and institutional censor they were each forced to endure throughout their careers. Each found a way to work independent of academia, sharing a common bond in their eternal search for truth within their work.

Here is a timeline merging the two careers: 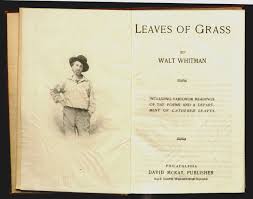 1865: Eakins studies at the Pennsylvania Academy of the Fine Arts (PAFA), also attending lectures in anatomy and participating in dissections at Jefferson Medical College.
1873: Whitman suffers a paralytic stroke and moves in with his brother George in Camden, New Jersey.
1875: Eakins paints The Gross Clinic. Public and critical response is hostile.
1876: The Gross Clinic is rejected from the art exhibition at the Centennial Exposition.
1878: Alumni of Jefferson University scraped together $200 to buy the painting.
1882: Osgood withdraws his edition of Leaves of Grass on complaint of Boston District Attorney and the edition is reprinted in Philadelphia, along with Specimen Days. News of the censure leads to a boom in sales.
1884: Whitman uses the royalties to buy a house at 328 Mickle Street in Camden. 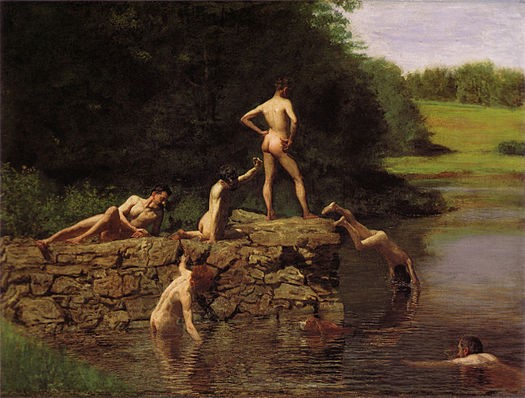 1885: Eakins paints The Swimming Hole.
1886: Eakins caused a scandal by lifting the loincloth of a male model in front of female students and is forced to resign as an instructor from the PAFA. He forms the Art Students’ League of Philadelphia but eventually stops teaching.
1887: Whitman lectures to hundreds in New York City at Madison Square Theater. Eakins is ostracized from Philadelphia society and spends the summer on a ‘rest cure’ at a ranch in the Dakota Badlands.
1888: Eakins is taken to Camden to meet Whitman by his friend Talcott Williams. Whitman finds the artist’s lack of social graces refreshing and offers to sit for him. “Mr. Eakins, the portrait painter, of Philadelphia; is going to have a whack at me.” Later that year, Whitman suffers another paralytic stroke followed by severe illness.
1889: Eakins paints The Agnew Clinic.

1889: The artist attends Whitman’s 70th birthday party and describes painting the poet, “I began in the usual way, but soon found that the ordinary methods wouldn’t do,—that technique, rules and traditions would have to be thrown aside; that, before all else, he was to be treated as a man.”
1890: Whitman pays $4,000 to have a tomb built for himself in Harleigh Cemetery, Camden.
1892: Whitman dies at 6:43 p.m. on March 27. The following morning, Thomas Eakins and his protégé Samuel Murray go to Camden to make a cast of Whitman’s face and left hand. Whitman’s brain is removed and sent to the American Anthropometric Society.
1895: Murray and Eakins use Whitman’s mask to carve Moses, one of ten biblical prophets commissioned for the Witherspoon building in Philadelphia. 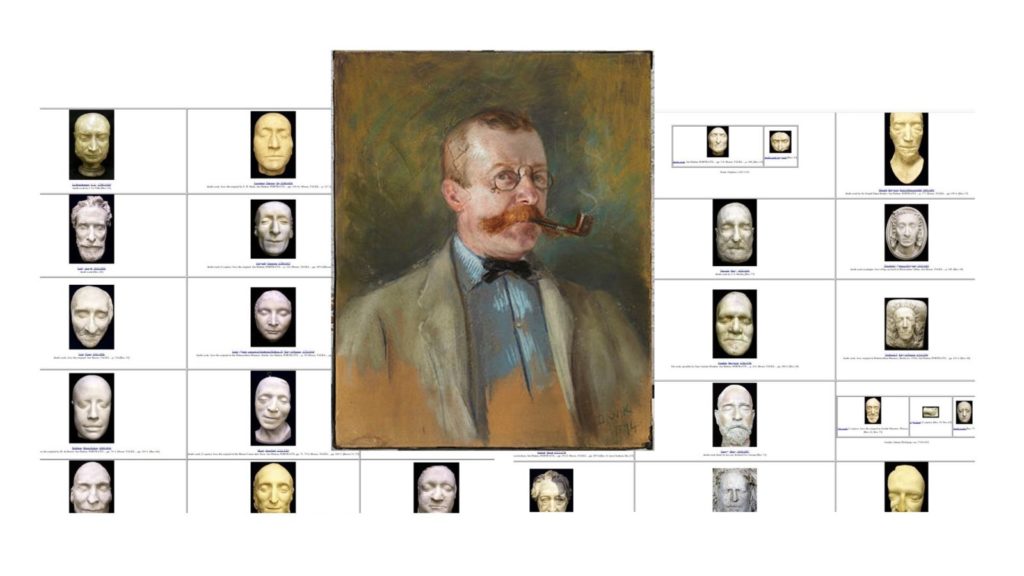