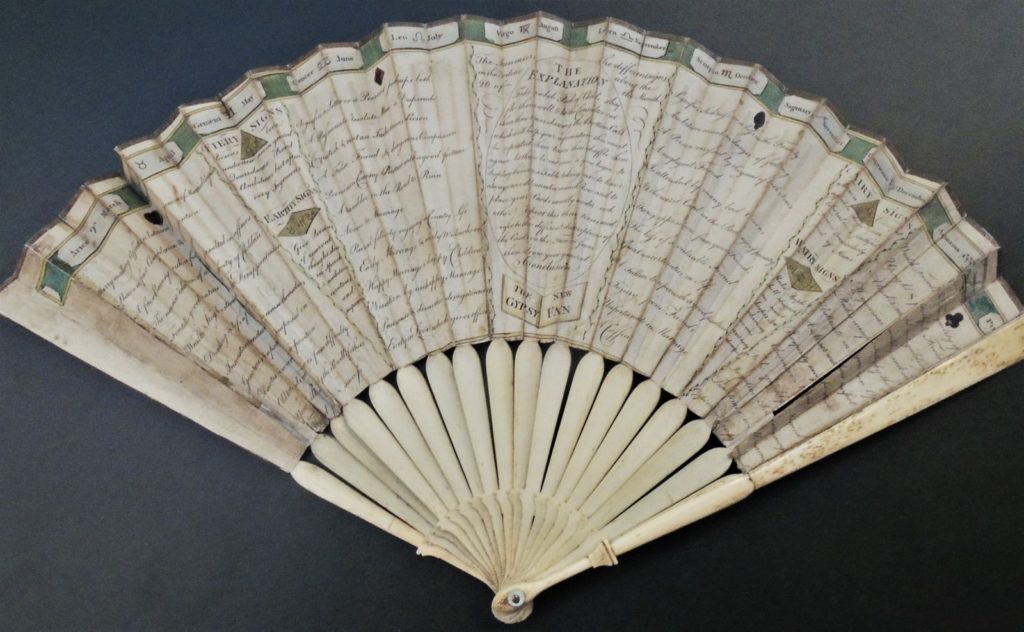 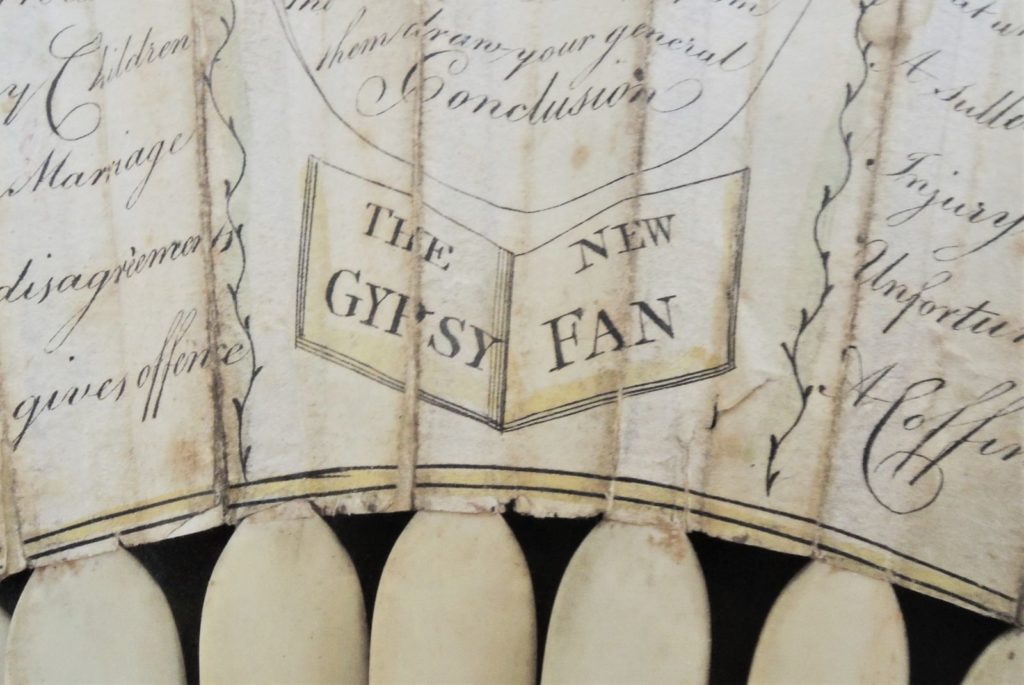 The Graphic Arts Collection recently added a late-18th-century fortune telling fan to the growing collection of printed fans in our library. Along the top border are twelve sections marked with the month and sign of the zodiac. Each section is further divided into “Earthy,” Fiery,” “Airy,” and “Watry,” listing the characteristics of those born under these signs.

At the center is a large oval providing “The Explanation” for using the fan to tell fortunes. The user is told to shuffle a pack of cards and lay out an odd number face up, which are read according to the fan’s descriptions.  To the left are the thirteen fortunes for each of hearts and diamonds, and on the right a similar arrangement for spades and clubs. The suit and number of the card are located and nine fortunes are read out to the player. The final instruction is to “draw your general conclusions.” 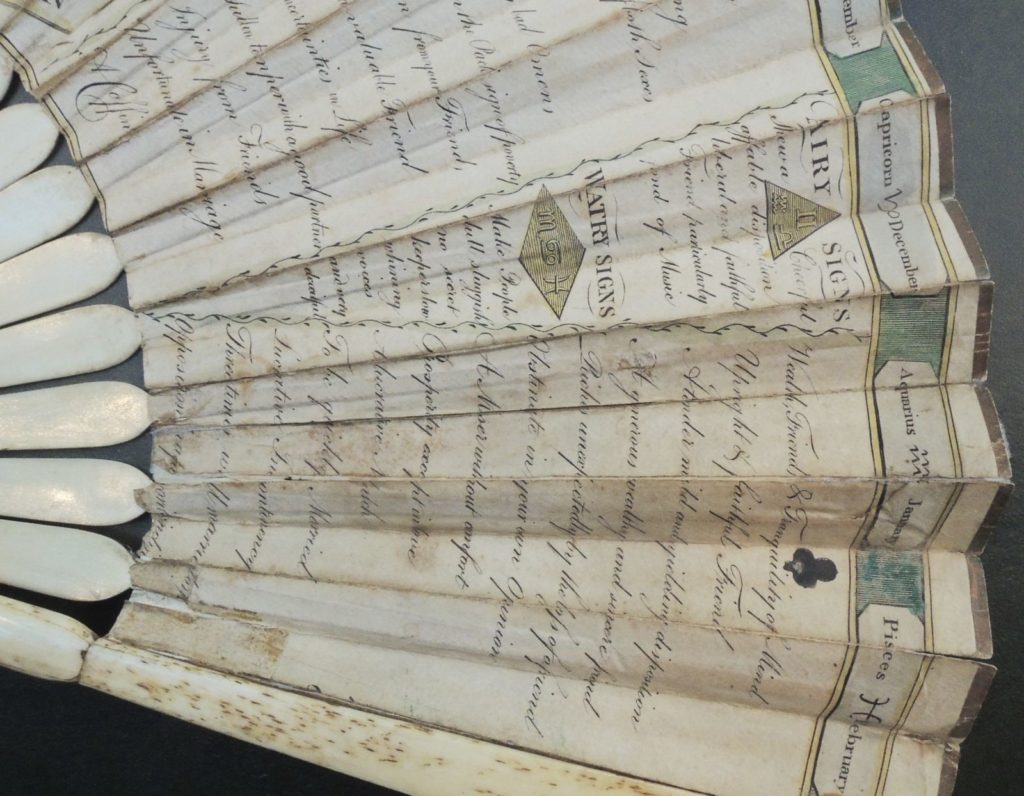 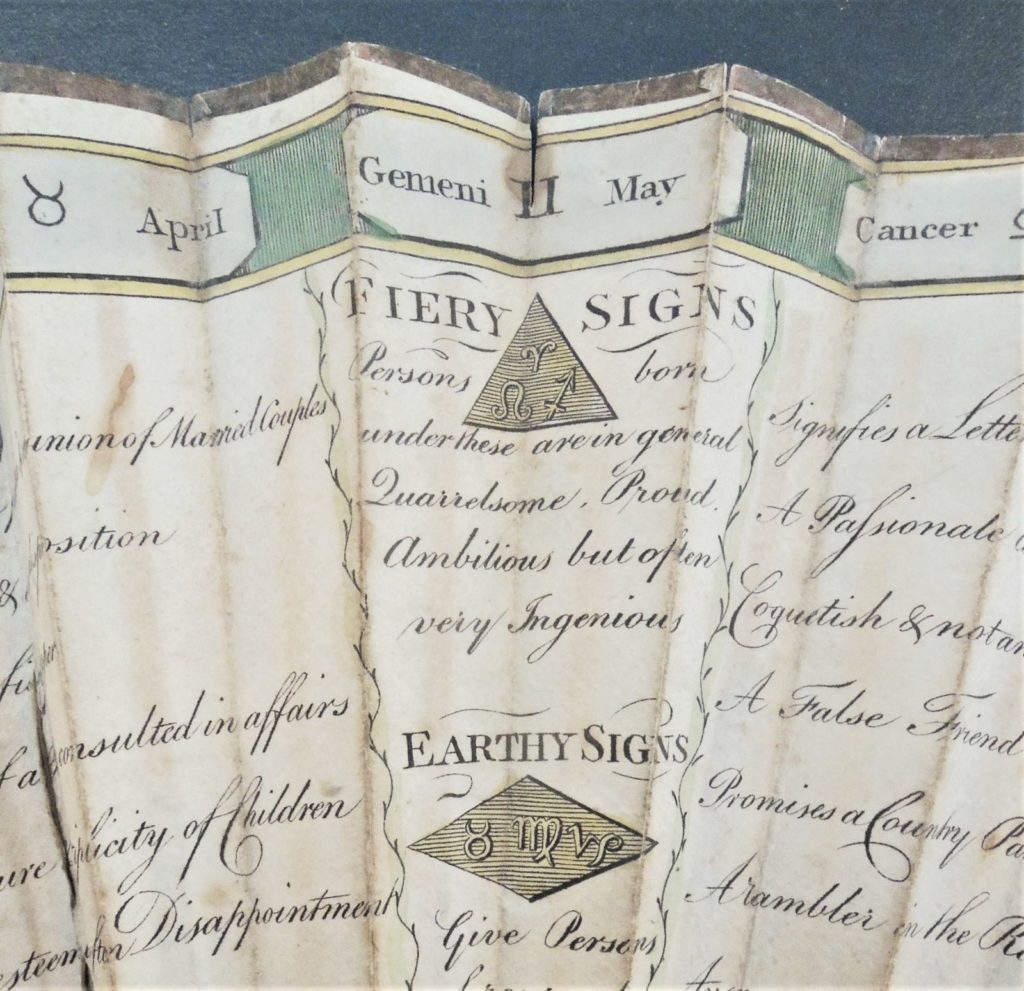 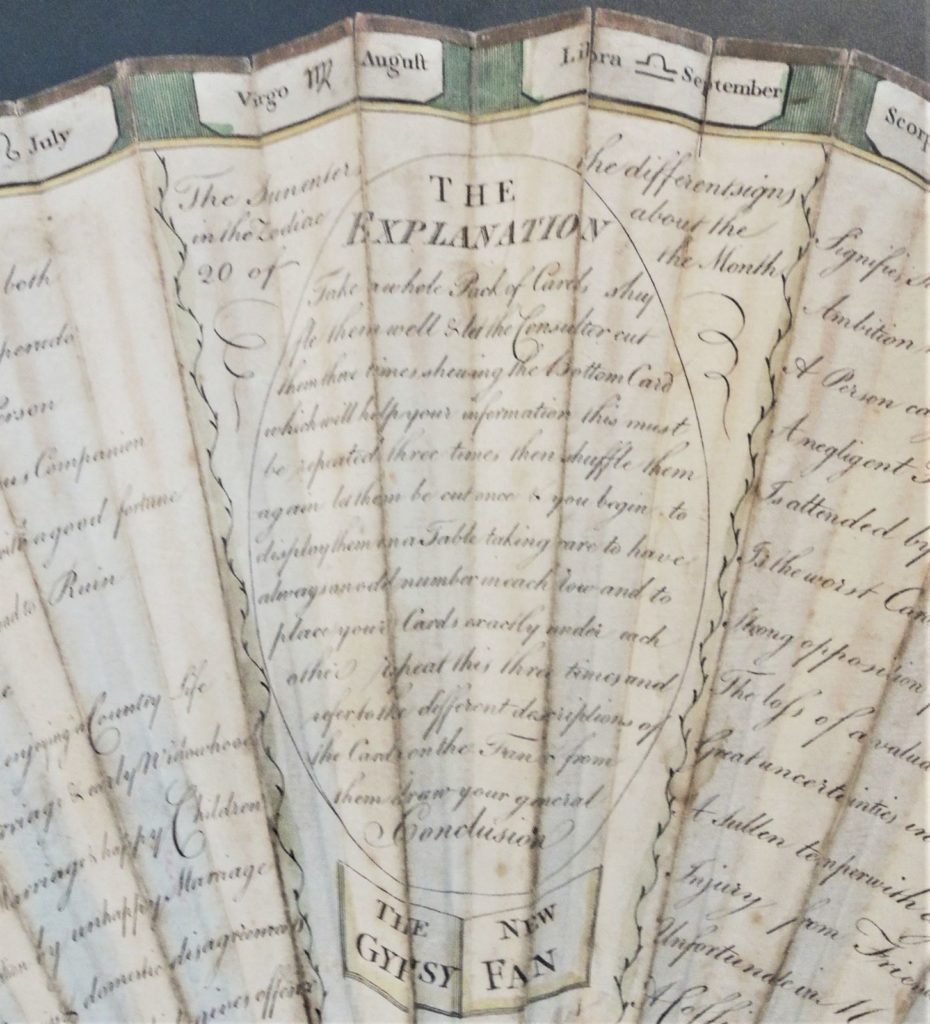 George Woolliscroft Rhead, writing in his History of the Fan (2014) notes:

“Gypsy, fortune-telling and necromantic [black magic] fans form a large class, and were common during the latter part of the eighteenth century. As early, however, as Aug. 3, 1734, a necromantic fan was advertised in the Craftsman as follows:—
‘By Eo, Meo, & Areo.
On Monday last was published
The Necromantick Fan; or, Magick Glass.
Being a new-invented Machine Fan, that by a
slight Touch unseen a Lady in the Fan changes her
Dressing-Glass according to the following Invitations:
If any one himself would see,
Pray send the Gentleman to me:
For in my Magick Glass I show
The Pedant, Poet, Cit, or Beau;
Likewise a Statesman wisely dull,
Whose plodding Head’s with Treaties full.” 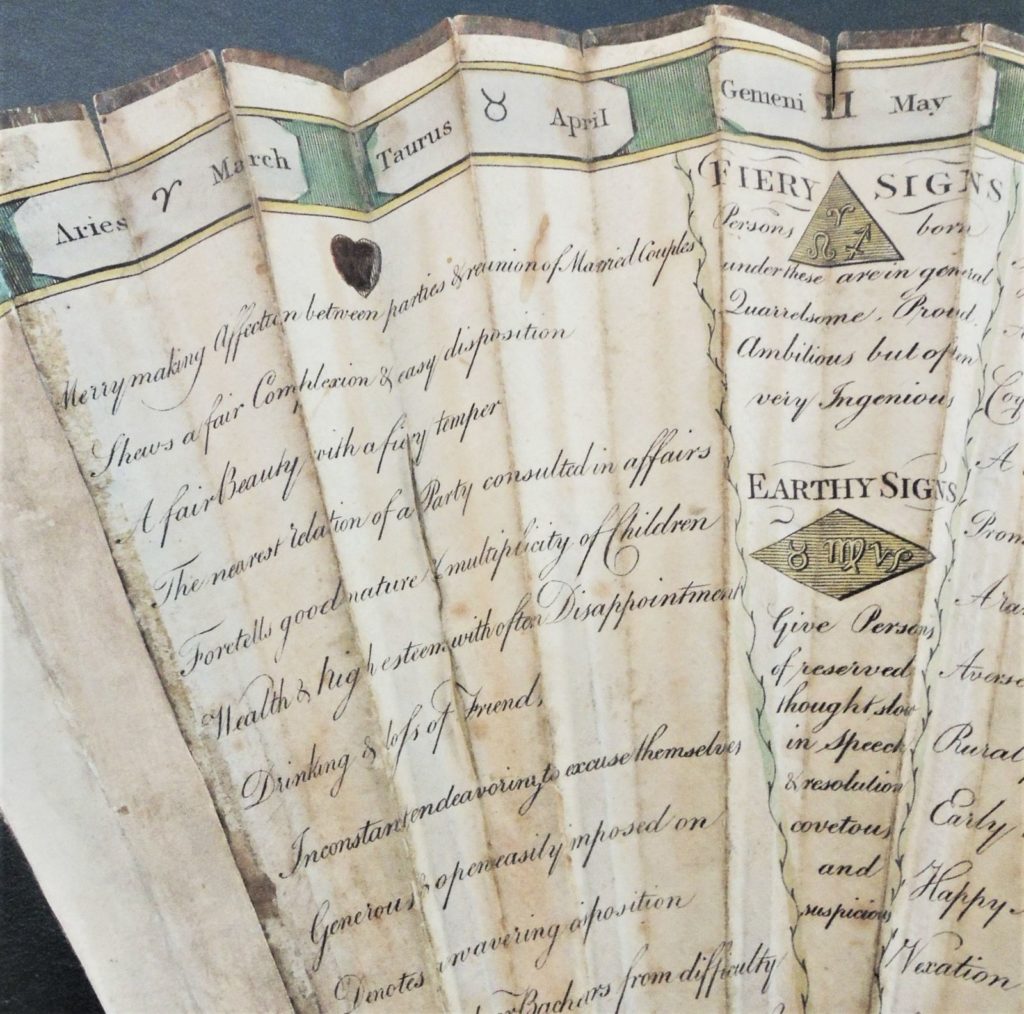 This fan shuold not to be confused with The New Woburn or Bedford Gipsy Fan at the British Museum; or The New Gypsy Fan at the Fitzwilliam Museum and Huntington Library; or several other titles for the fan inscribed “The Art of Fortune Telling by Cards.” Each of these has “an oval vignette of a gypsy woman reading the palm of a young girl, watched by a boy, with an egg timer and cards on the table beside her. Text lists the months with the characteristics of their star signs, and fortune-telling readings from playing cards, such as: “Promises a Country Partner with a good future”; “Is the worst Card in the Pack sign of poverty”; “Three times well married”; and “A Coffin”. On the verso of the fan, directions for fortune telling with cards.”—Huntington Library 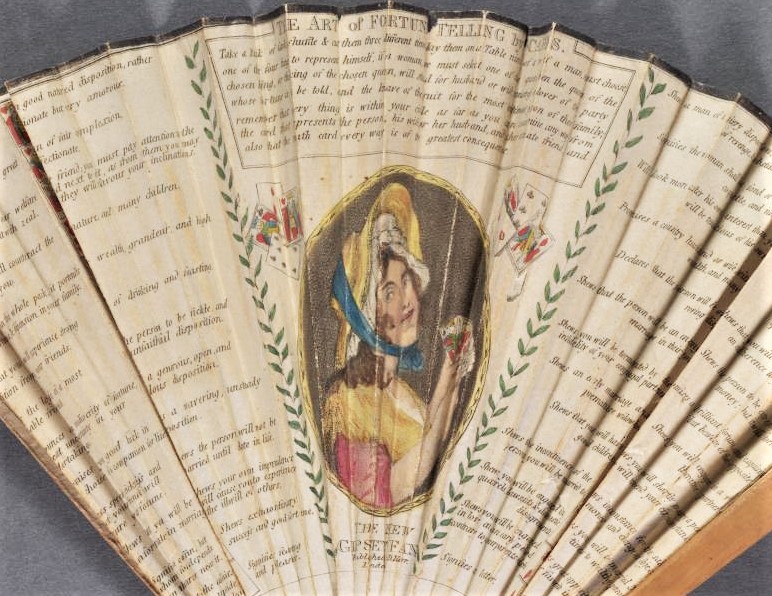