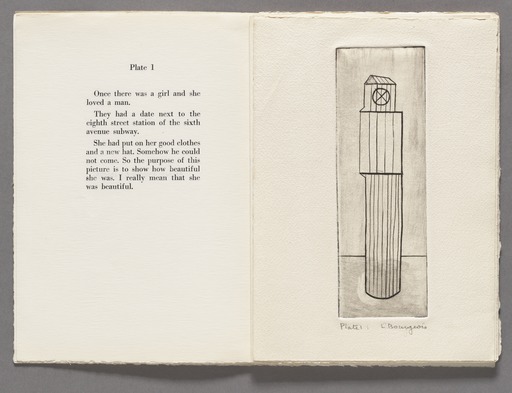 Angela Anaïs Juana Antolina Rosa Edelmira Nin y Culmell (1903–1977), known professionally as Anaïs Nin (pronounced Ana East Neen) and Louise Joséphine Bourgeois (1911–2010) were two of the strongest, most self-sustaining women of the 20th century. Together they produced a stunningly beautiful image/text narrative, He Disappeared Into Complete Silence, although they may never have met. 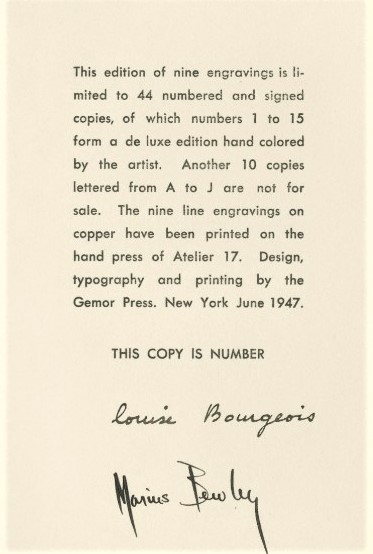 As Nin was signing a contract with Dutton Publishers in 1946 and preparing to close Gemor Press, where she and Gonzalo More had been hand-printing books since 1942, she expected to publish only one more title. A large folio edition of her House of Incest, which appeared in Paris in 1936 under the imprint Siana editions (Anais spelled backwards), was to be printed and published in a limited run of 50 copies. Then Stanley William Hayter (1901-1988), director of Atelier 17, the print workshop where Nin’s husband printed, walked in with another project. 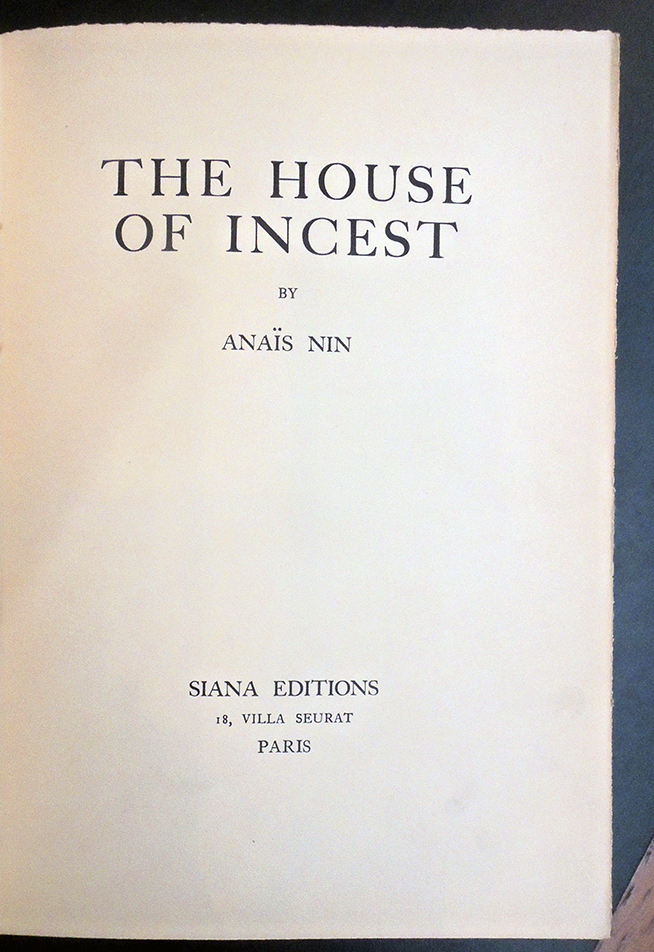 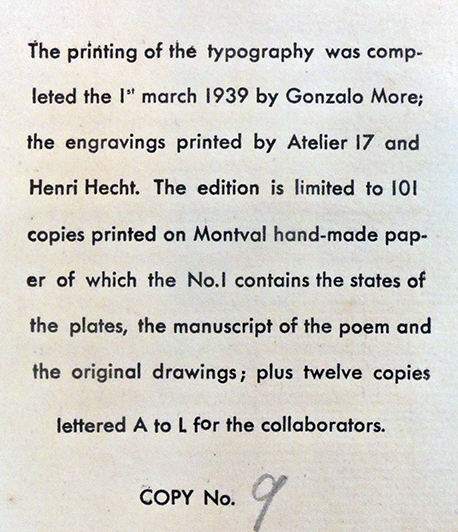 In the 1930s, Nin, her husband Hugh Guiler, More, Hayter, and Bourgeois were all living and working in Paris but when the city started mobilizing for war, they each made their separate ways to New York City. Just before leaving France, More worked with Hayter on Atelier 17’s limited edition Fraternity, which was completed in March of 1939.

When the Hayter’s studio reopened in New York, Guiler studied etching there and several of his wife’s hand-printed editions include her husband’s prints under the pseudonym Ian Hugo. Nin’s Diaries contain several mentions of Hayter stopping by Gemor Press on Macdougal Street or later 13th Street when they expanded their printing shop to include an etching press.

Nin credits Hayter with teaching her and More to print relief copperplate etchings and with bringing them work when they needed the money. There is never a mention of titles or publications, just the fact that he would bring work to their shop if an artist needed letterpress text with their fine art prints.

This might have been the case with Louise Bourgeois’s He Disappeared Into Complete Silent. There is no mention of Bourgeois in Nin’s Diaries, or of the project. Neither is Nin mentioned in Bourgeois sources. It is a tragedy the two never really collaborated. By this time, More had foolishly given away all the money needed to run the business and Nin had no choice but to close the door. 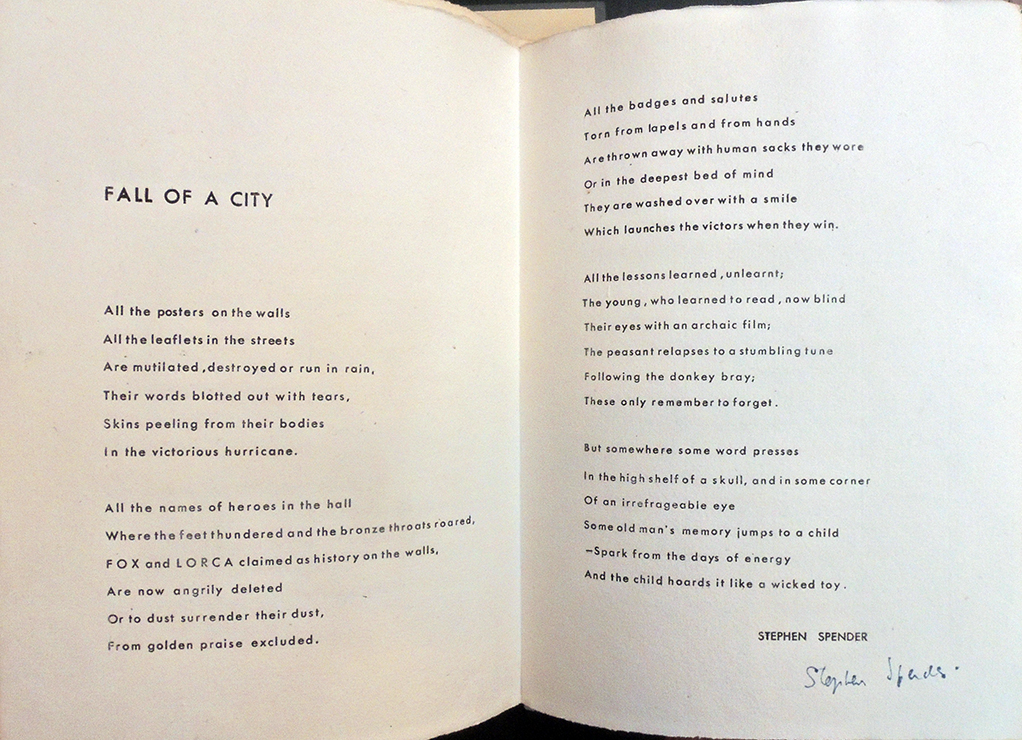 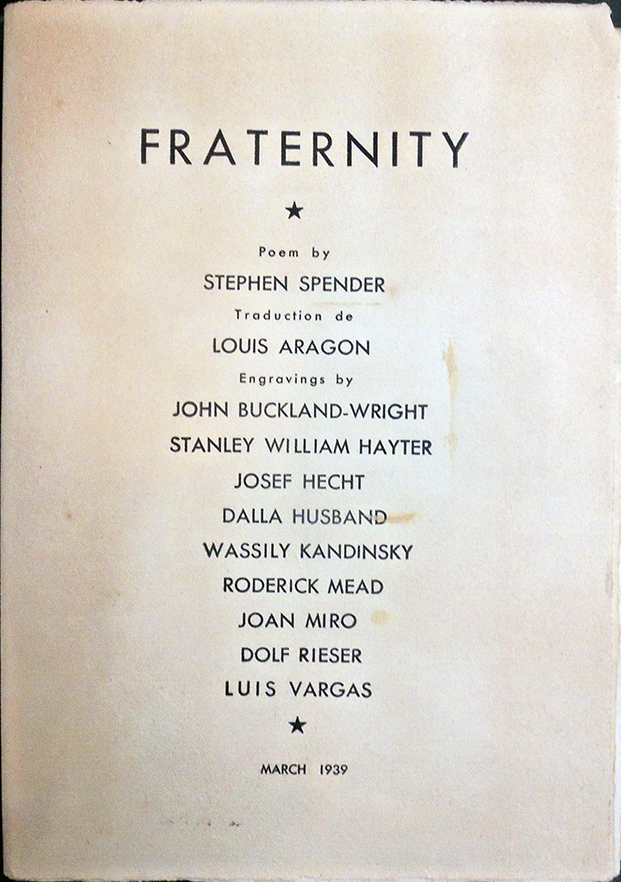 We would show more of the Gemor Press editions but someone has removed them from Firestone Library and the books will have to be replaced. Be careful when buying or selling these books to check for a Princeton property stamp inside.

In Paris
The House of Incest by Anaïs Nin. Paris: Siana éditions [1936].

The Winter of Artifice by Anaïs Nin. Paris; [printed in Belgium]: Obelisk Press, 1939.

Rendezvous with Spain: A poem by Bernardo Clariana: Translated by Dudley Fitts and illustrated by Julio de Diego. New York Gemor Press 1946. Edition: 520 copies (100 in black and white, 400 in color; 20 deluxe copies have been hand colored by the artist).