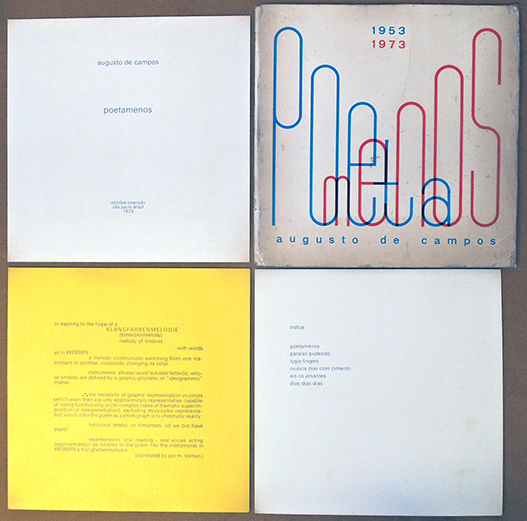 As leading voices in Brazilian concretism or concrete poetry, Augusto de Campos (born 1931), his brother Haroldo de Campos, and Décio Pignatari founded the Noigandres group and its literary magazine, Noigandres; antologia do verso à poesia concreta in the 1950s. Like Europeans such as Stéphane Mallermé, the Noigandres were interested in exploring the visual elements of written or printed words, along with sung or spoken performances of these texts, which they called verbivocovisual. 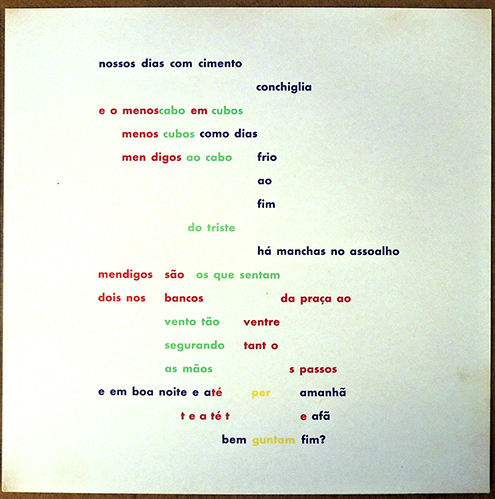 Here is a small portion of the biography on his website that mentions Poetamenos (Minuspoet):

Born in São Paulo (Brazil) in 1931, poet, translator, literary and music critic. In 1951 he published his first book of poems, O REI MENOS O REINO (The King Minus the Kingdom). In 1952, with his brother Haroldo de Campos and Decio Pignatari, he launched the literary magazine “Noigandres”, the origin of the Noigandres Group which initiated the international movement of concrete poetry in Brazil. The second issue of that magazine (1955) contained his series of color¬poems POETAMENOS (Minuspoet), written in 1953, and considered the first consistent examples of concrete poetry in Brazil. Verse and conventional syntax are abandoned and the words are rearranged in graphic patterns. sometimes printed in six different colors, under inspiration of Webern’s Klangfarbenmelodie.

In 1956 he participated in the organization of the First National Exhibition of Concrete Art (Painting and Poetry) in the Museum of Modern Art in São Paulo. His work has since been included in many international exhibitions, as well in world¬known anthologies like “Concrete Poetry: an International Anthology”, edited by Stephen Bann (London, 1967), “Concrete Poetry: a World View”, edited by Mary Ellen Solt (University of Bloomington, Indiana, 1968),” Anthology of Concrete Poetry”, edited by Emmet Williams (NY, 1968). Most of his poems were assembled in VIVA VAIA,1979, DESPOESIA, 1994, and NÃO (with a CDR of his Clip-Poems), 2003. Other important works are POEMOBILES (1974), CAIXA PRETA(Black Box)1975, collections of object-poems in collaboration with the graphic artist and designer Julio Plaza. —http://www.augustodecampos.com.br/biografia.htm 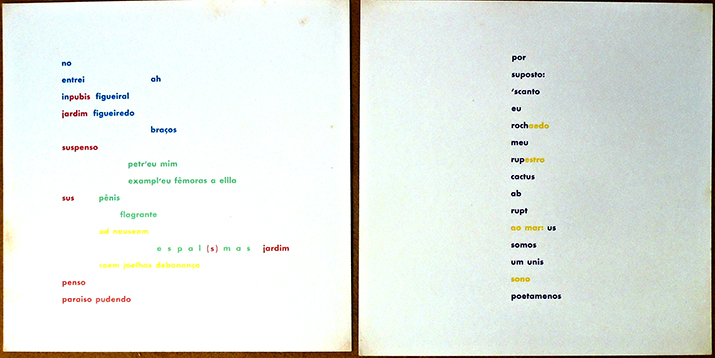 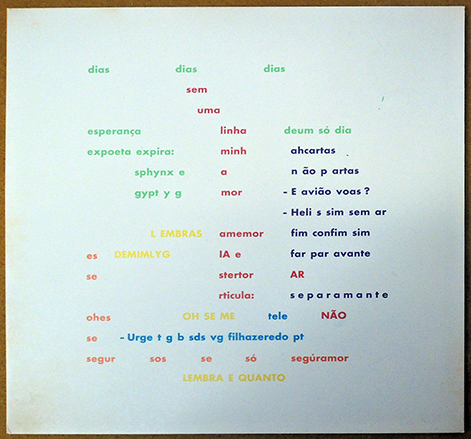