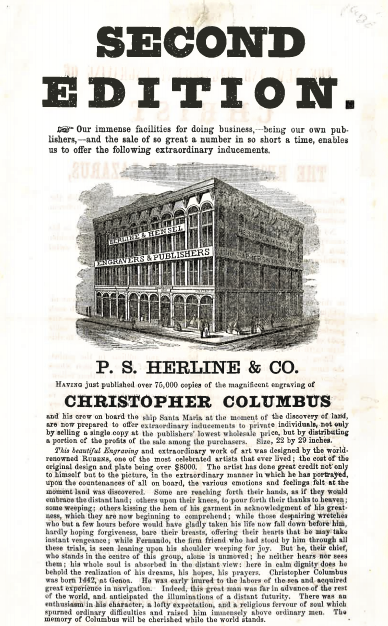 In the summer of 1860, the Philadelphia lithographers and partners Edward Herline (1825-1902) and Daniel Hensel (1830-1919) came up with a marketing scheme to sell a fine art print, supposedly an edition of 75,000 engravings, after “one of the most celebrated artists that ever lived.” No picture was shown. Today, no copy of this print has yet to be found in an institutional collection. 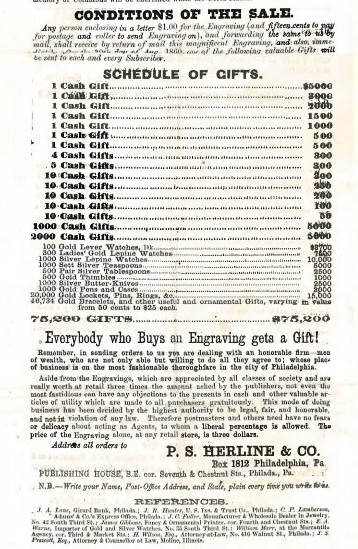 Did they get away with something? Thanks to a recent request for information, a broadside announcing the sale was found in the Graphic Arts Collection, and many American newspapers carried their advertisements. A close reading of these sources reveals many inconsistencies, beginning with the name of the original artist: Ruben, not Rubens.

The print being offered by Herline & Hensel (630 Chestnut Street) in August 1860 was a lithograph after Christian Ruben (1805-1875), variously titled: Columbus, First sight of the new world, 1839, currently hanging at the National Gallery in Prague. While you might enjoy this German artist’s work, he is not the most celebrated artist that ever lived. And an engraving is not a lithograph. 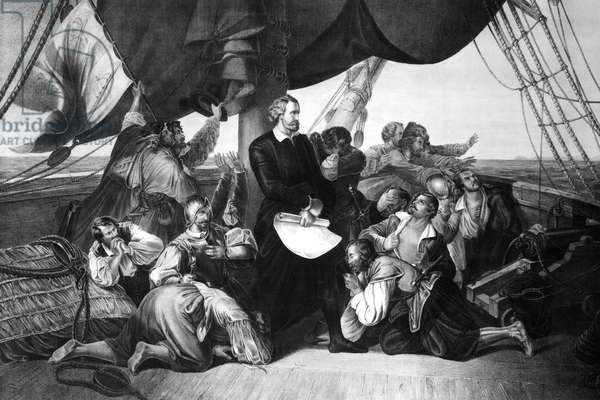 Columbus, New World, 1492, The First Sight of the New World (Columbus discovering America). Found in Bridgeman’s Collection and in Worldcat 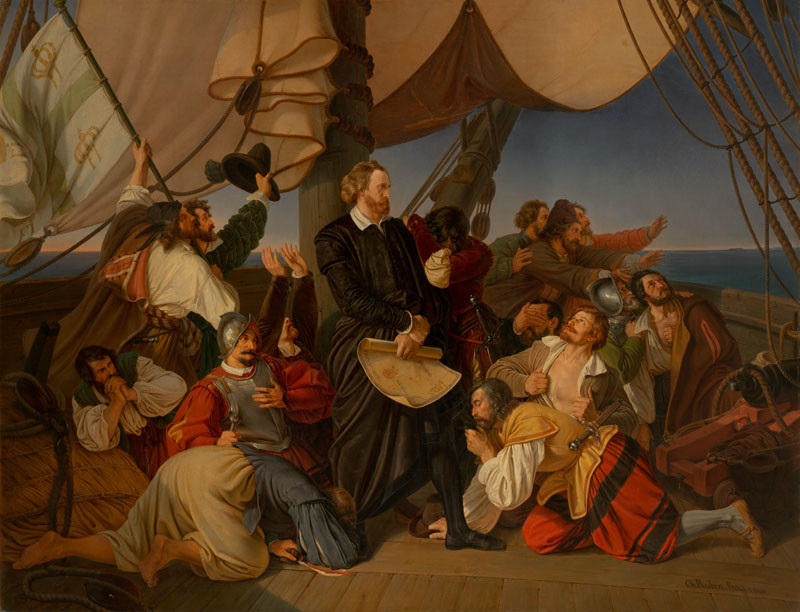 P.S. Herline & Co. having just published over 75,000 copies of the magnificent engraving of Christopher Columbus and his crew on board the ship Santa Maria . . . are now prepared to offer extraordinary inducements to private individuals, not only by selling a single copy at the publishers’ lowest wholesale price, but by distributing a portion of the profits of the sale among the purchasers.

This beautiful engraving and extraordinary work of art was designed by the world-renowned Rubens [sic], one of the most celebrated artists that ever lived; the cost of the original design and plate being over $80000. The artist has done great credit not only to himself but to the picture, in the extraordinary manner in which he has portrayed upon the countenances of all on board, the various emotions and feelings felt at the moment land was discovered. Some are reaching forth their hands, as if they would embrace the distant land; others …

Any persons enclosing in a letter $1.00 for the engraving (and fifteen cents to pay for postage and roller to send engraving on). And forwarding the same to us by mail shall receive by return of mail this magnificent engraving and also, immediately after the 30th day of Aug 1860 one of the following valuable Gifts will be sent to each and every subscriber. Schedule of gifts: Everybody who buys an engraving gets a gift! Remember in sending orders to us you are dealing with an honorable firm – men of wealth, who are not only able but willing to do all they agree to: whose place of business is on the most fashionable thoroughfare in the city of Philadelphia. 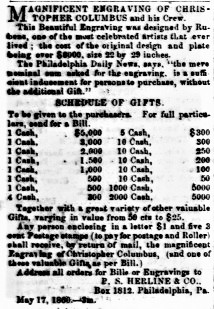 From Wikipedia: Christian Ruben. Born in Trier, Ruben studied in Düsseldorf under Peter von Cornelius from 1823, and in 1826 settled in Munich, where he worked on the designs for the new stained glass windows for the Regensburg Cathedral and for a church in Auer. In 1836 he worked on designs for the decoration of Hohenschwangau Castle, and produced oil paintings as well. In 1841 he was appointed director at the Academy of Fine Arts in Prague, where he decorated the belvedere with wall paintings. He also painted a hall for the Prince of Salm and three altarpieces for the church in Turnau (modern-day Turnov, Czech Republic). From 1852 to 1872 he was director at the Academy of Fine Arts Vienna, where he died in 1875. One of his sons, Franz Ruben, was also a painter.

Magnificent engraving of Christopher Columbus and his crew. This Beautiful Engraving was designed by Rubens, one of the most celebrated artists that ever lived; the cost of the original design and plate being over $8000, size 22 by 29 inches. The Philadelphia Daily News, says, “the mere nominal sum asked for the engraving is a sufficient inducement for persons to purchase without the additions Gift.” Schedule of gifts. To be given to the purchasers. For full particulars, send for a Bill. Together with a great variety of other valuable gifts, varying in value from 50 cts to $25. Any person enclosing in s letter $1 and five 3 cent Postage stamps (to pay for postage and Roller) shall receive, by return of mail, this magnificent engraving of Christopher Columbus, (and one of these valuable gifts as per Bill.)

Besides ebay, are there any copies of this print in permanent collections and did anyone win the $5,000?