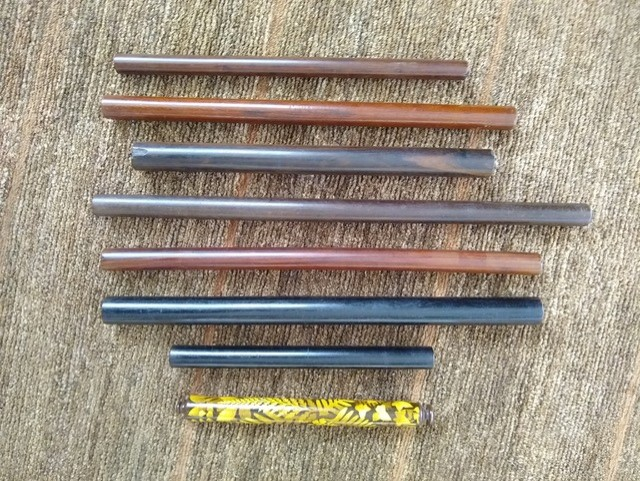 Thanks to the thoughtful donation by W. Allen Scheuch II, class of 1976, the Graphic Arts Collection now hold seven ebony wood and one glass round rulers, also called cylinder rulers or rolling rulers. These perfectly round, variously sized tools were used to line paper when writing letters or for technical documents. Eventually John Tetlow filed the British patent no. 963, “Machine for ruling paper for music and other purposes,” June 15, 1770, later published by Eyre and Spottiswood, at the Great Seal Patent Offices, 1850, and by the mid-1800s machine lined paper was readily available.

In a search for the correct term for these polished rulers, a mention is found by John Dougall in The Young Man’s Best Companion and Guide to Useful Knowledge (1815):

In ruling the paper for writing, the close marks of the wires used in the manufacture of the paper and the open lines running across them, will be of great service : but the beginner should not trust implicitly to this help : he should mark off, with a pair of compasses, on the margin of the paper, a number of points, at regular distances, and through them draw light pencil lines, within which the writing must be confined. At first compasses and a plain flat ruler are to be employed; because by them the lines are drawn with the greatest accuracy: but when the writer’s eye is more experienced, he may judge of the distance to be left between the lines, without using compasses; and then for expedition’s sake, employ a round ruler, which ought to be perfectly cylindrical, that is of precisely the same thickness in every part of its length. 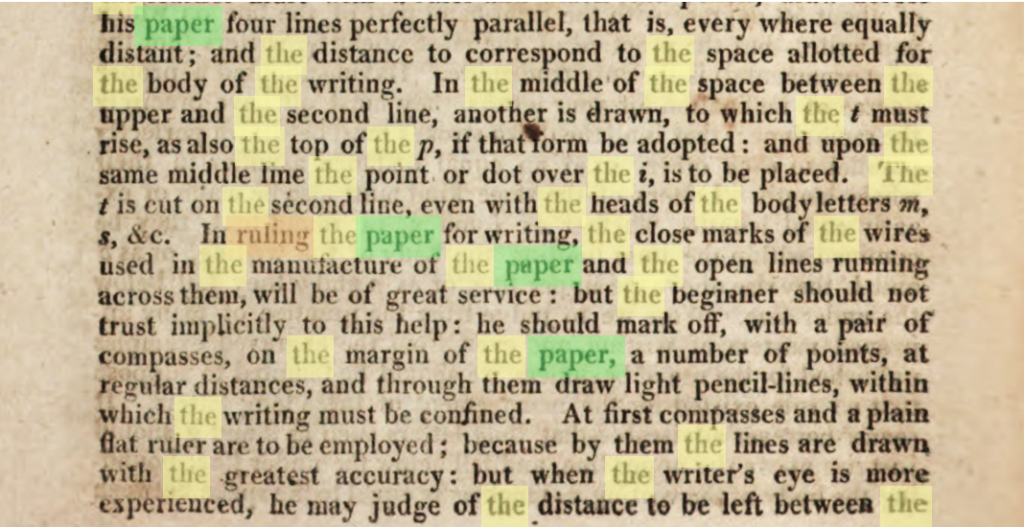 The 1851 Penny Cyclopaedia of the Society for the Diffusion of Useful Knowledge listing for a “Ruler, Parallel” notes:

“A good form of this instrument is explained in Mabquoi’s Rulers, P. C. S., which is particularly applicable to the case in which numerous and related parallels or perpendiculars are to be drawn. The ordinary instruments arc of two kinds, which might well be called parallel riders and parallel rollers. … The simplest kind of roller is the common round ruler, which, with a little practice, will draw parallels for ordinary use very well. It is good practice in the use of instruments to draw parallels in this way; the ruler being held in the middle and gently allowed to take its own rolling motion.”

Using an Ngram viewer, there is no evidence of the term cylinder ruler. Round ruler gets the most hits, peaking around 1840.

Stationery binders would usually rule the blank books they produced, inking in horizontal lines to write on and vertical lines to write between, a practice that goes back to the Middle Ages. When ruling was done by hand using cylindrical rulers and dip pens, the time that went into ruling an account book must have been the largest single component in its price. Early in the 19th century the pen-ruling machine was invented (2); this reduced the cost of wages for ruling but also became the greatest capital expense in the stationery binder’s shop. This change is reflected in the American directories of the later 19th century, which used the term “blank book manufacturers” for what the English continued to call vellum binders. The factory had taken over from the craftsman. 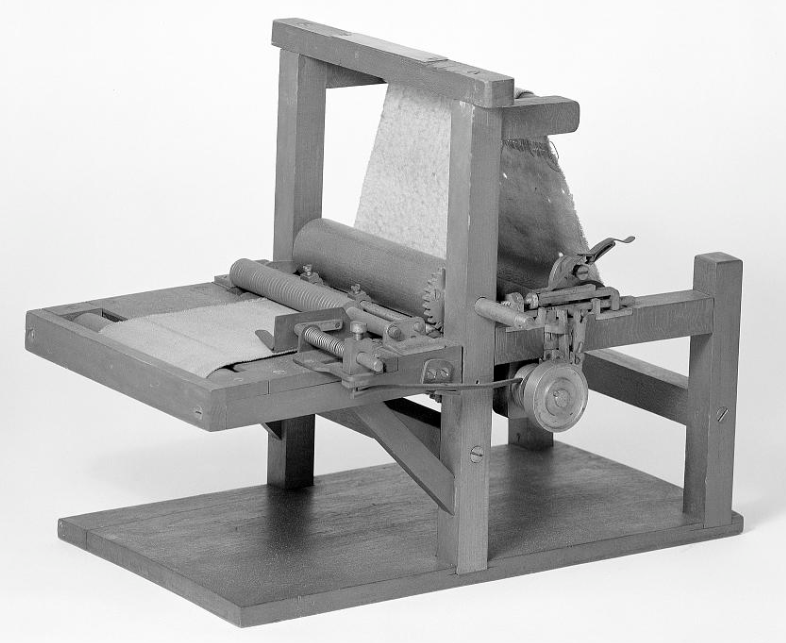 The National Museum of American History offers this “patent model demonstrates an invention for a paper-ruling machine which was granted patent number 42418. The invention produced both feint lines (ruled) and down (striker) lines (blank spaces where the pens were lifted from the paper).” Credited to Edward Town and James L. Chichester, ca 1864.