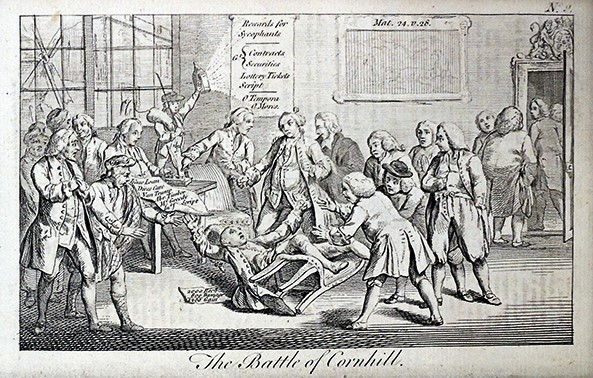 Dickson Q. Brown, Princeton University Class of 1895, liked to collect (clip?) prints from the British journal Town and Country Magazine; or, Universal Repository of Knowledge, Instruction, and Entertainment. Approximately 75 of these plates were donated to the Princeton University Library. A surprising number offer scenes that take place in London taverns, such as the engraving titled The Battle of Cornhill, originally published in Town and Country, issue 1, March 1769, facing page 137, with story 137-38.

Charles Dingley (1711-1769) built a wind-powered sawmill in 1767 at Limehouse and in May of that year it was pulled down by “A large body of sawyers … on pretence [sic] that it deprived many workmen of employment.” On March 8, 1769, a number of London merchants were invited to the King’s Arms tavern in Cornhill to sign an address to the King. They were already unhappy, being charged one shilling to enter the room (to keep out the riffraff). Dingley punched John Reynolds (John Wilkes’ attorney) so hard he fell out of his chair and a fight ensued. Some of the others on site were Reverend John Horne, Peter Muilman, and Samuel Vaughan. Several satirical prints were quickly engraved and published, including The Addressers address’ …, The Inchanted Castle, or Kings Arms in an Uproar, and The Battle of Cornhill. 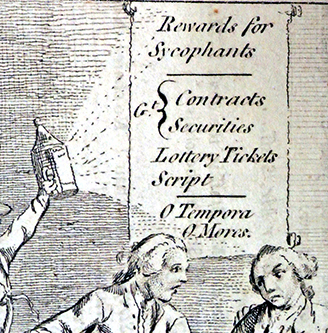 Note on the wall the reference to Matthew 24, v.28: “For wherever the carcass is, there the eagles will be gathered together,” (modern translation: “Wherever the corpse is, the vultures will gather”).  Also on the wall is the announcement being highlighted: “Rewards for Sycophants / G.t Contracts, Securities / Lottery Tickets / Script / O Tempora O Mores.” (“Oh the times! Oh the customs!”, first recorded to have been spoken by Cicero–wikipedia). Several gentlemen ran out the back door as soon as the battle began. Through the window, you see a broken windmill (although Limehouse is miles away to the east).