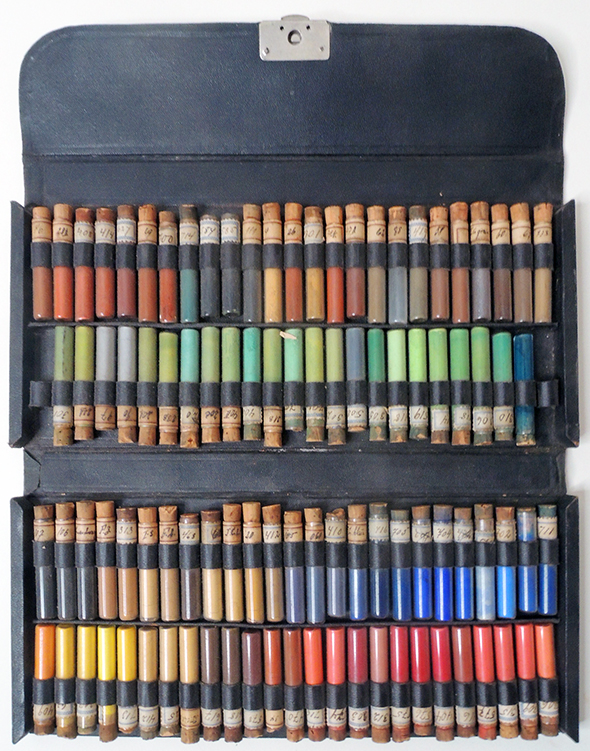 The Graphic Arts Collection recently acquired a linen case containing 98 glass vials filled with powder pigments to be used in the painting of porcelain wares, also known as china painting. The pigment is now permanently sealed in the vials with the cork tightly fixed to the glass. Each vial is numbered with a paper label. “China or porcelain paint pigment does not dissolve in water or oil, because the pigments are made up of metallic oxides blended with fine powdered glass. The powdered glass acted as a flux so that the glaze and coloured paint would adhere together permanently upon firing.”

As Debby DuBay writes in The Journal of Antiques and Collectibles:

…Women played significant roles in the birth of the china-painting movement in America. In 1873 in Cincinnati, Karl Lagenbeck, an immigrant ceramic chemist, and his neighbor, Maria Longworth Nicols (1849-1932) experimented with over-glaze china paints. Maria, a student at the McMicken School of Design, placed some of her decorated pieces on display at a student exhibition. Several classmates, specifically one Mary Louise McLaughlin (1847-1939), was so smitten by the beauty of Nicols’ work that she requested their instructor, Ben Pitman, to purchase the necessary supplies to paint on porcelain.

With so much interest in this new art form, Pitman engaged Marie Eggers, an immigrant who had studied the art of china painting in the Dresden factory, to teach a class in 1874. This group of students entered their wares in the Philadelphia Centennial Exposition and were responsible for exposing millions of Americans to this new art form. 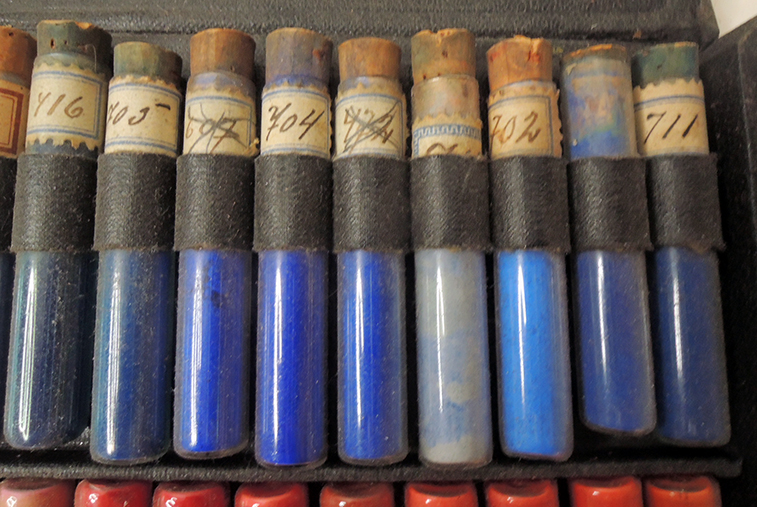 …By 1877 there had been several books published in Europe on directions for painting on china for amateurs, but it is student Mary Louise McLaughlin who published the first book in America – China Painting, A Practical Manual for the Use of Amateurs in the Decoration of Hard Porcelain. McLaughlin’s infectious enthusiasm for this art form spread throughout the United States, and she is credited with educating the general public and those who could not attend classes on the art of china painting. Her book included information on tracing on china, china painting techniques and directions for gilding, firing, etc.

In 1879 McLaughlin formed the Woman’s Pottery Club. By 1881, there were major china painting studios in Boston, Cincinnati, Philadelphia and New York, including The Osgood Art School established in New York City by Adelaide Harriett Osgood (1842-1910). But it is McLaughlin who is credited with influencing the entire nation and setting the standards for porcelain clubs established throughout the United States.–Painted Porcelain: Women Played a Major Role – The Journal of Antiques and Collectibles –by Debby DuBay.https://journalofantiques.com/features/hand-painted-porcelain-women-played-a-major-role/

Mary Louise McLaughlin, China painting: a practical manual for the use of amateurs in the decoration of hard porcelain (Cincinnati: R. Clarke, 1877). ReCAP 738 M22