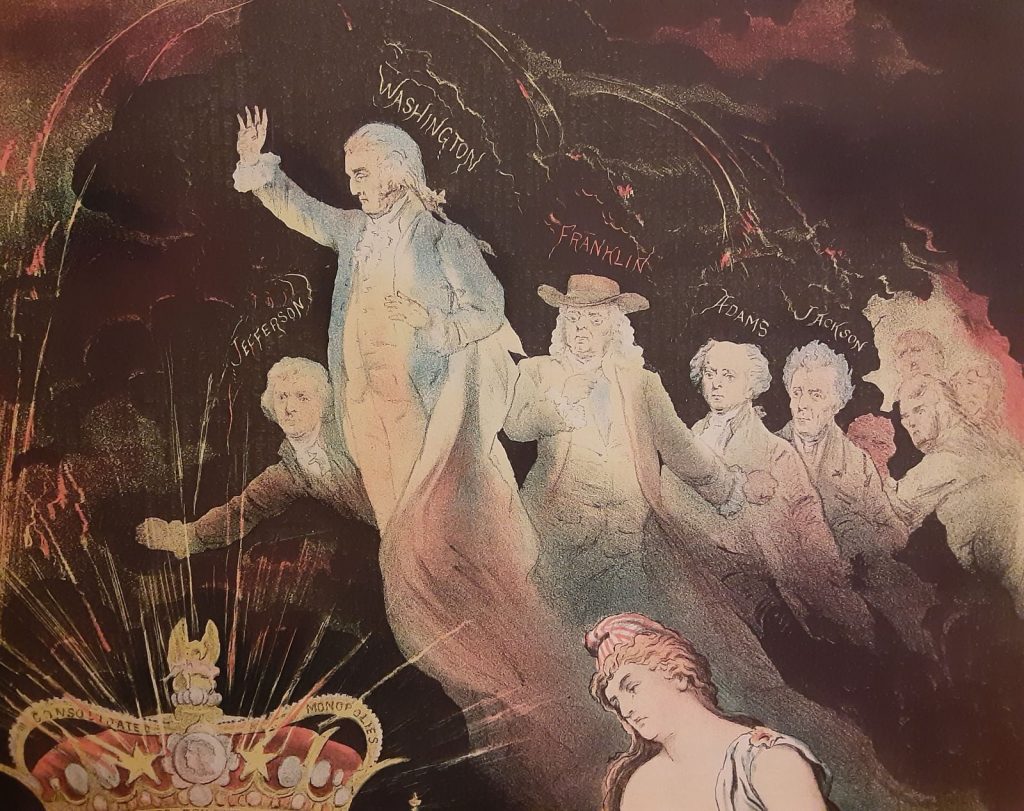 For the July 3, 1886, issue of The Reflector, an Illustrated Journal devoted to the Interests of Labor & Capital VS. Monopoly, the  double-page centerfold is captioned “The Day of Rejoicing for Monopoly! Over the ever-increasing Dependence of the Sovereign People,” and signed by both members of the publication’s art department, Peter Kraemer (1823-1907) and Conrad Rossi-Diehl (also known as Curt Rossi, 1842-1926). 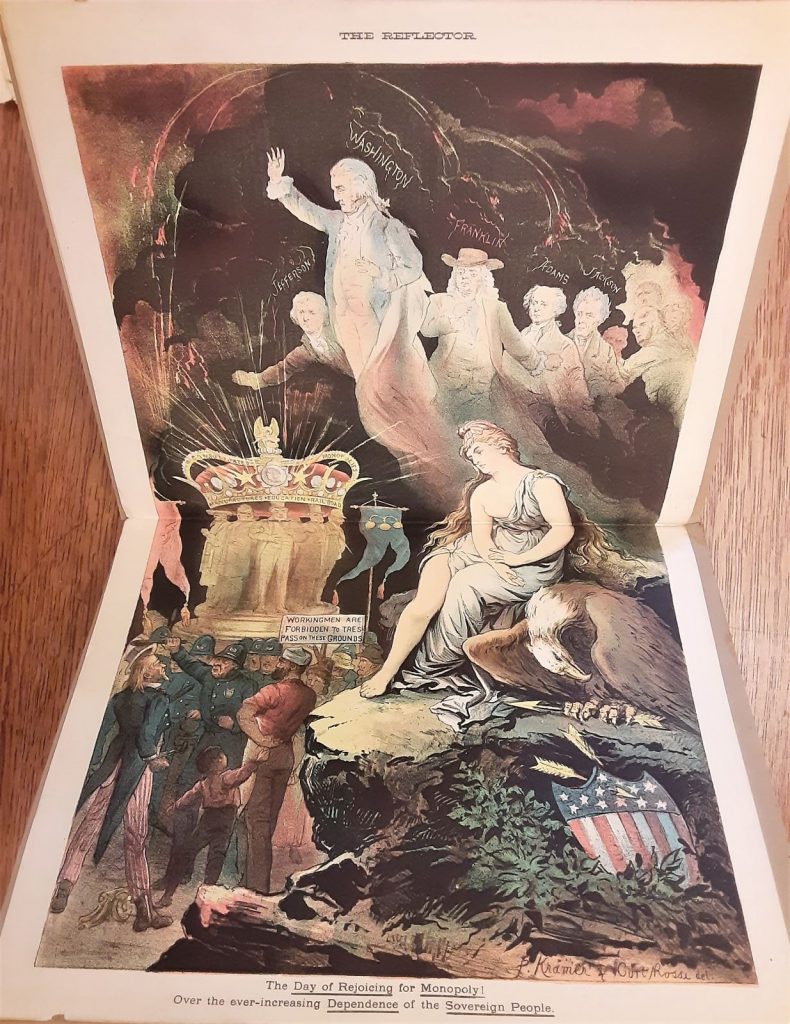 “The Day of Rejoicing for Monopoly! Over the ever-increasing Dependence of the Sovereign People.” in The Reflector, an Illustrated Journal devoted to the Interests of Labor & Capital VS. Monopoly 1, no. 7 (July 3, 1886). Photographed from the New-York Historical Society Library.

The description of the cartoon reads:

“Our double page cartoon represents “The day we celebrate.” Columbia weeps; her proud bird is sad, and the ghosts of Washington and other founders of our Great Republic which float above the scene are amazed to find : that only the ‘favored few’ enjoy the fruits of the ‘Declaration of Independence’, whilst the masses have been reduced to a state of abject Dependence.– Even Uncle Sam must ‘doff’ his hat before the crowned Heads of the land.”

Together with editorial manager John Fredericks, Kraemer and Rossi produced this spectacular and little appreciated illustrated weekly in an attempt to overtake Puck and Judge with decidedly liberal politics and an anti-corporate point of view. Although not directly connected, the Knights of Labor are regularly quoted and supported in many issues. From May 22 to November 6, 1886, these three men wrote, drew, and lithographed their colorful publication that sold for six cents (or an optimistic $3.00 annually). The Reflector Publishing Company was based at 58 & 60 Fulton Street, with the printing done by the “power press printers” Eckstein & Porr in the same building.

Their mission is defined in the second issue: “As labor alone creates capital, and capital—when properly employed—in turn increases the productively of labor, it will be the sole endeavor of this journal to combat monopoly, the evil which grows and thrives in proportion as it flourishes and fans the fratricidal feud between those agents of human progress and prosperity. Monopoly paralyzes the arm of the small capitalist and prostrates the wag-workers . unless labor and capital unite their strength in joint effort to check the sway of monopoly, disruptions and dismemberment will be imminent or the doom of a return to abject dependence—worse than feudal thraldom [sic]—is sealed.” 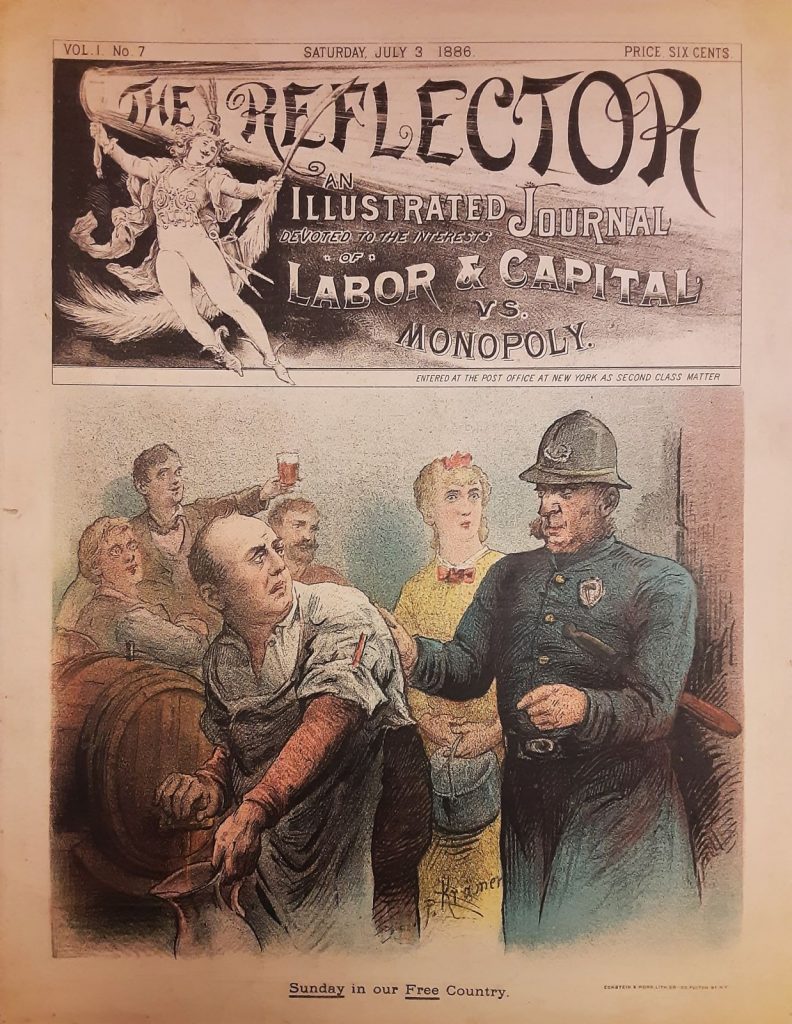 On the cover of the July 3 issue is a cartoon titled “Sunday in our Free Country,” objecting to the growing temperance movement and prohibition of alcohol, stating: “On the title page we show the manner in which the ‘hand of the law’ lays hold of the offe[n]der against the dictates of Intolerance in our Land of Liberty. Supporting the ability of a citizen to partake in a humanizing beverage.”

In the early issues of The Reflector, the artists chose not to sign their lithographs, noting: “The editor of the new have workmen seems to take exception to the modesty which our artists have shown by withholding their signatures from the illustrations. They simply proposed to let the work stand on its merits—name of no name. the coat you wear is not a whit better or worse though it bear the names of a dozen tailors. Not all men seek notoriety.” In later issues, Kraemer signs the front and back cover illustrations and both Kraemer and Rossi sign the centerfold.