“In the late 18th century, between 5,000 and 7,000 black people lived in London,” writes Simon Schama in Rough Crossings: Britain, the Slaves and the American Revolution (available online through Dixon eBooks) “More than 20 years before the legislation of William Wilberforce finally ended slavery in Britain, the practice was still legal – but ambiguously so. Most blacks in London were free, but not all, and slave catchers operated widely in the capital, kidnapping runaways.”

“…To his friends, Henry Smeathman was “Mr Termite”. No one knew more about ants. In 1771 he had been sent by the scientist and future president of the Royal Society, Joseph Banks, to the Banana Islands off the coast of Sierra Leone to collect botanical specimens for Banks’s collection at Kew. He had stayed there for three years, turning himself from botanist into entomologist.”

“In the 1780s he had pottered along giving his insect lectures, a harmless and slightly marginal figure in the scientific and philanthropic communities of which he considered himself a member. But then, in 1786, the cause of the black poor gave him a sudden, belated opportunity, and Smeathman set before the Lords of the Treasury his Plan of Settlement for the creation of a thriving free black colony in ‘one of the most pleasant and feasible countries in the known world’– Sierra Leone.” 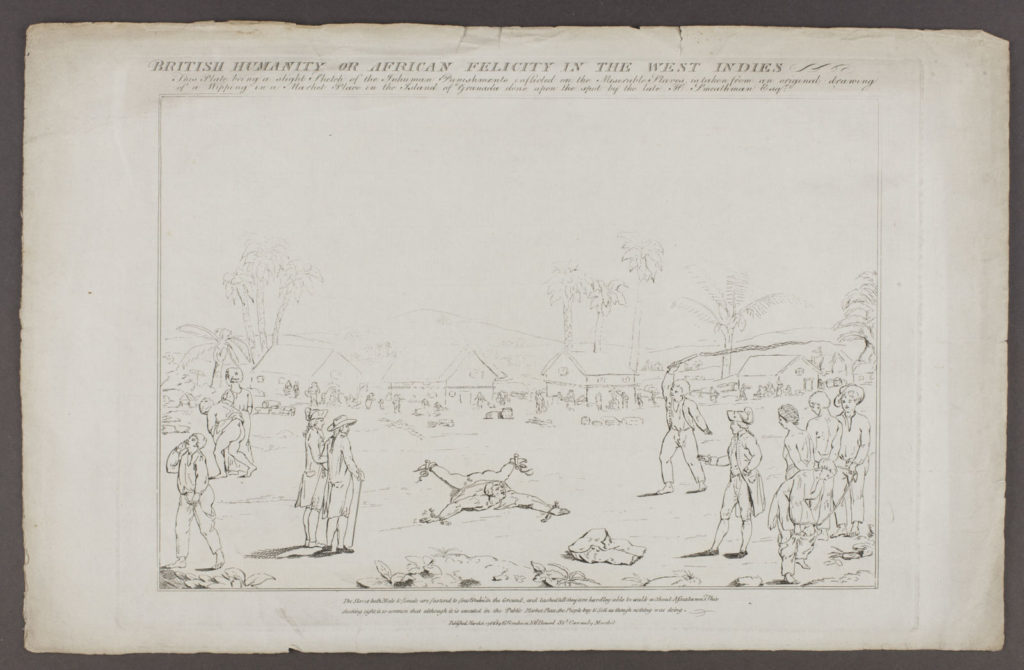 To illustrate his articles and pamphlets, Henry Smeathman made crude sketches, later reproduced and published by the London dealer G. Graham. The graphic arts collection recently acquired one entitled “British Humanity or African Felicity in The West Indies.”

The inscription continues, “This Plate Being a Slight Sketch of the Inhuman Punishments Inflicted on the Miserable Slaves is Taken from an original drawing of a whipping after Henry Smeathman. March 8, 1788 … The Slaves both Male & Female are fastened to four Stake’s in the Ground, and lashed till they are hardly able to walk without Assistance. This shocking sight is so common that although it is executed in the Public Market Place, the People buy & sell as though nothing was doing.”

Starr Douglas, “The Making of Scientific Knowledge in an Age of Slavery: Henry Smeathman, Sierra Leone and natural history,” Journal of Colonialism and Colonial History 9, no. 3 (Winter 2008)