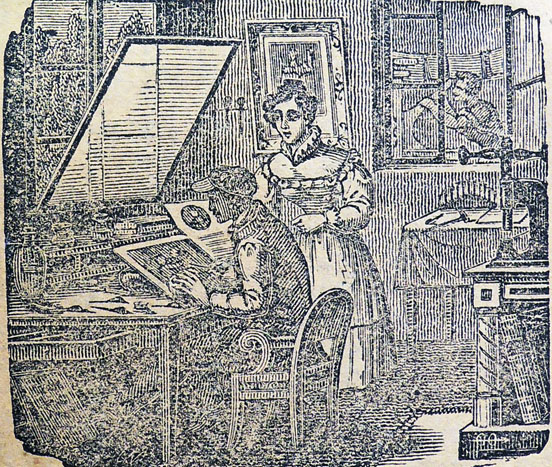 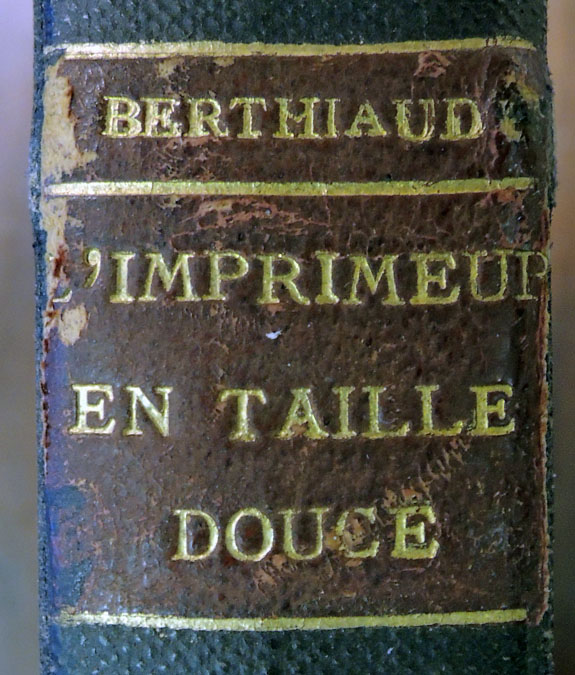 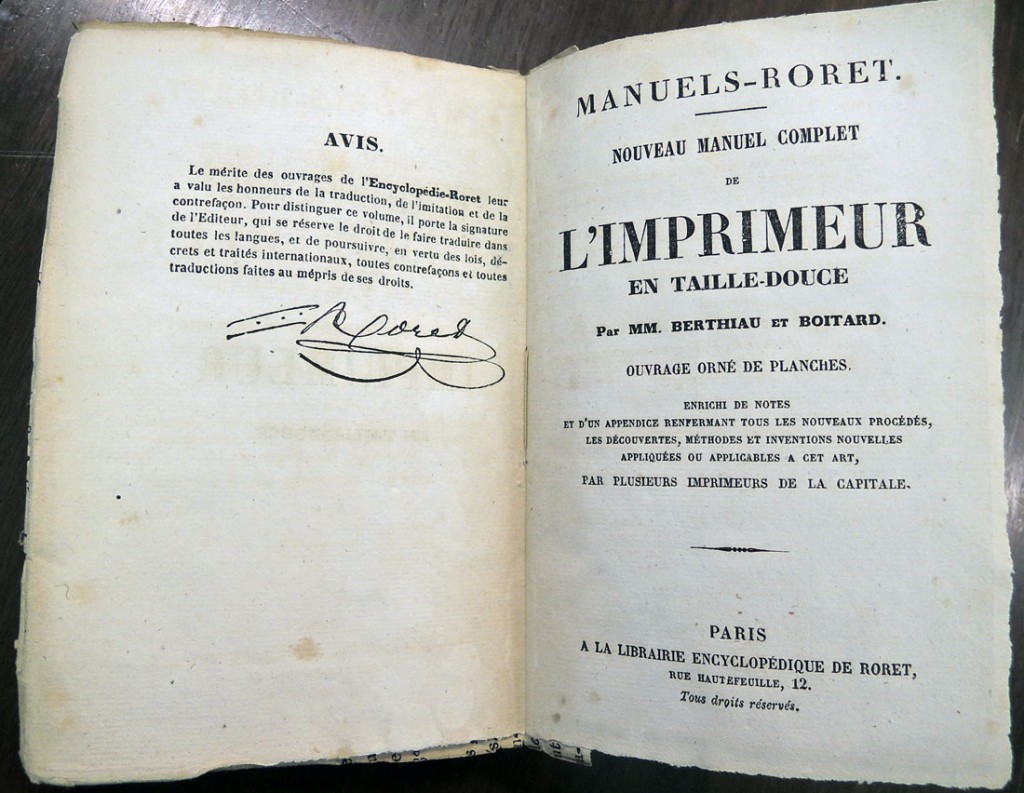 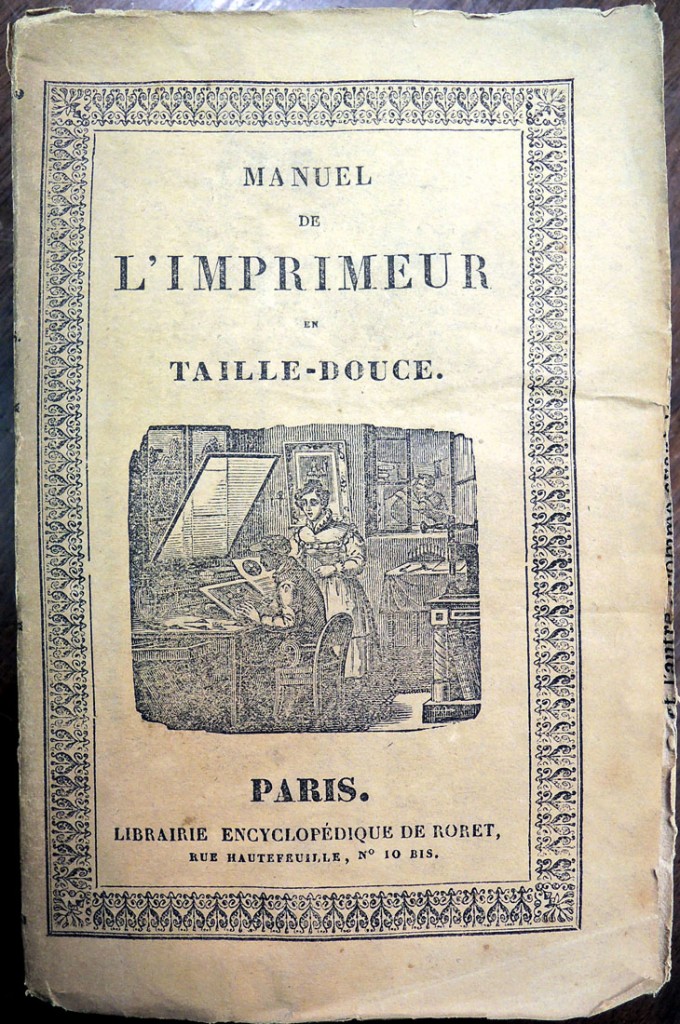 Book historian Roger Gaskell has done an exdended description of these volumes and with his permission, I will repeat it here for the benefit of others.

The first edition, first issue has the half-title is headed Encyclopédie-Roret and has an Avis on the verso with authenticating facsimile signature; the titlepage is undated, headed Manuels–Roret and Berthiau is so spelled. Copies with this state of the half-title and title were re-issued with advertisements dated 1880 and 1885.

In the second issue the first bifolium is re-set, and among other differences there is no mention of the Manuels Roret, the verso of the half-title is blank, the titlepage is dated 1837, and the author spelled Berthiaud. Bigmore and Wyman I, p. 52; Stijnman 029.1, both describing the issue dated 1837.

This is the most extensive rolling press manual ever published and the first original manual since Bosse (1645). Pierre Boitard explains in his Avertis–sement that he took the part of an editor for material supplied by Berthiau, an experienced copper-plate printer. Both wooden and iron presses are described and illustrated, making this the first published account of the iron rolling-press and its operation.

It is the first manual to discuss the use of intaglio illustrations in printed books. Berthiau travelled to England to investigate copper-plate printing in London, where plates for books were apparently much better printed than in Paris.

Boitard attributes this to the higher price of books in London. In his long Appendice de l’éditeur, he makes proposals for the improvements in the economy of copper-plate printing. Many of the Manuels Roret were first published as Manuels with revised editions as Nouveu Manuels, but there seems to have been no earlier edition of this manual. 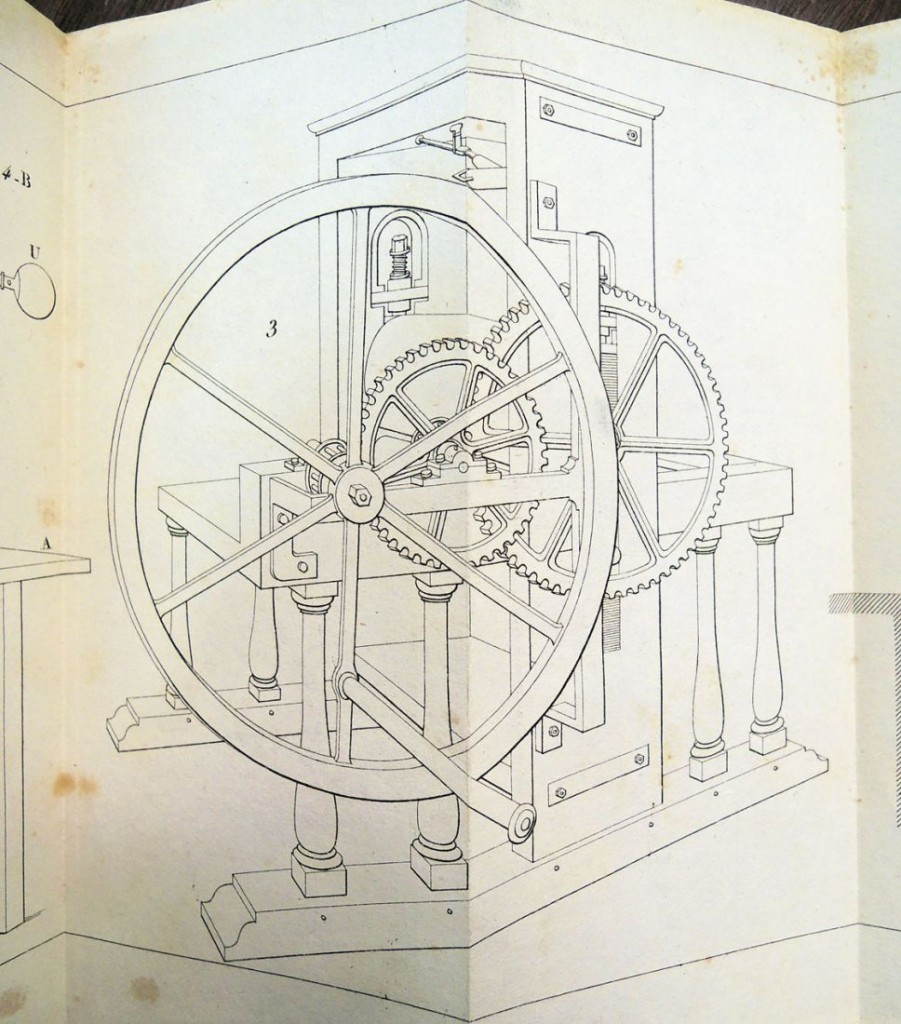 The priority of this undated issue seems to be confirmed by the fact that the author’s name is here consistently spelled Berthiau (on the titlepage and on pp. 4 and 5) while in the 1837 dated issue it is Berthiaud on the titlepage but unchanged in the text which is printed from the same setting of type (presumably from stereotype plates).

If the OCLC holdings are to be believed, this original issue is much rarer than the later issues, with copies at the V&A and University of Virginia only; compared with 8 copies in North America of the 1837 issue and 4 undated but with 1880 advertisements.

In the first edition, second issue, the first bifolium is re-set, omitting any mention of the Manuels Roret. The verso of the half-title is blank, the titlepage is dated 1837 and the author spelled Berthiaud. (In the first issue the half-title is headed Encyclopédie–Roret and has an Avis on the verso with authenticating facsimile signature; the titlepage is undated, headed Manuels–Roret and Berthiau is so spelled – see above). Bigmore and Wyman I, p. 52; Stijnman 029.1, both describing this issue.

In this issue the relationship between author, Berthiaud, and editor, Boitard, is spelled out on the titlepage and plusieurs imprimeurs de la capitale whose improvements are reported are now identified as, MM Finot, Pointot and Rémond and other printers of the capital.

This copy belonged to a practicing copper-plate printer. Adolfo Ruperez was the leading printer of artists’ prints in Spain in the first half of the twentieth century; he learned his craft in Paris. OCLC locates copies of this issue at Getty, LC, Newberry, University of Illinois, Brandeis, Columbia, Harvard and NYPL. 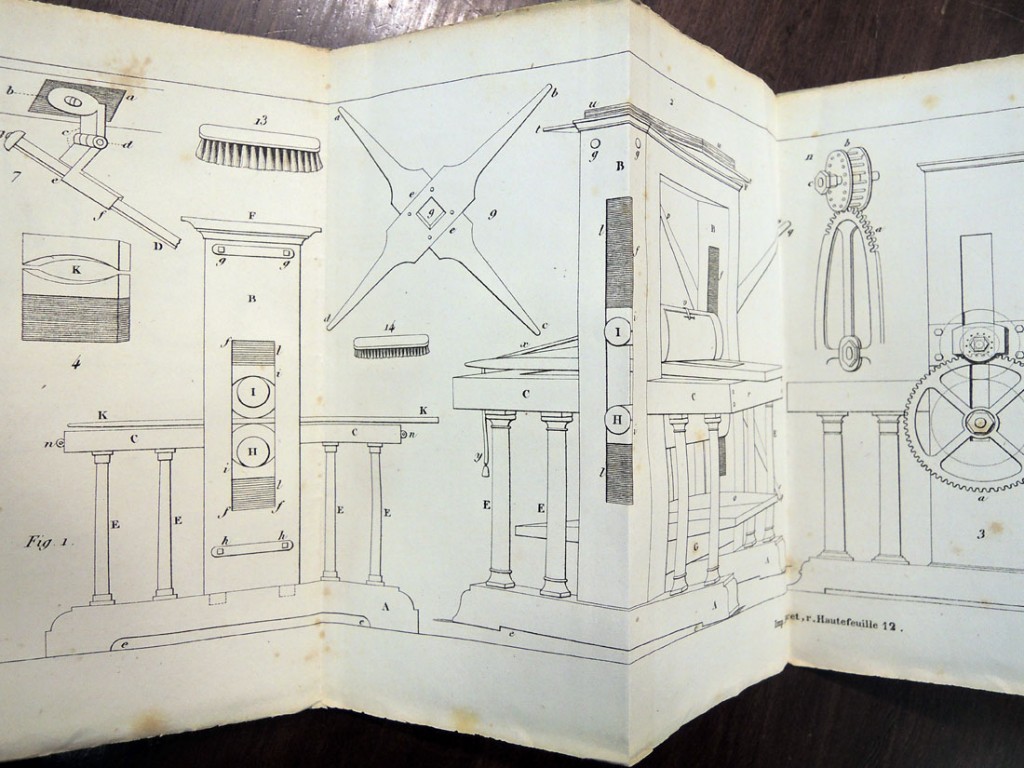