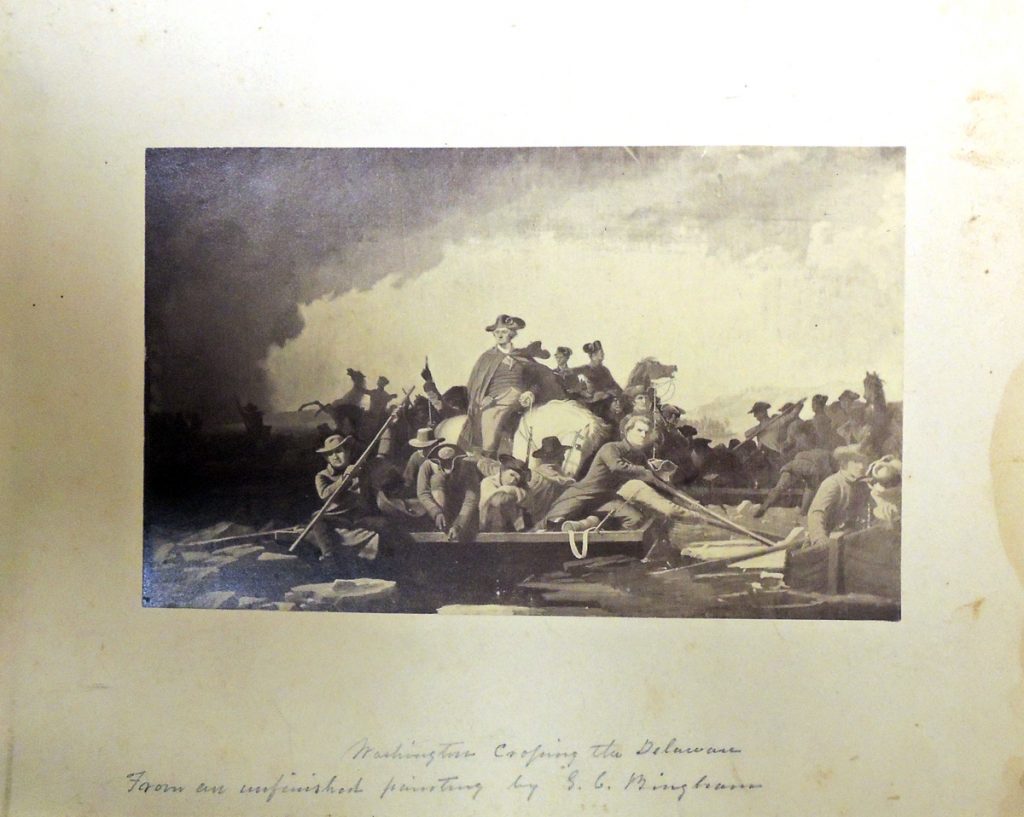 Washington Crossing the Delaware, From an unfinished painting by G. C. Bingham, between 1856 and 1871. Albumen silver print. Graphic Arts Collection GAX2017- in process.

Yet another find has been made, thanks to the renovation and reorganization of our library. This time credit goes to Steve Ferguson for identifying an albumen silver print of G.C. Bingham’s painting “Washington Crossing the Delaware,” taken during the many years that the work sat unfinished in the artist’s studio. It is, so far, the only image of Bingham’s painting in its earliest stages and will be extremely helpful to American painting scholars who want to study his composition and process.

“September 14, 1855, Bingham was spending most of his time on portraiture. He had opened a studio in the Grand Jury room of the courthouse at Columbia and was engaged upon a number of portraits. By the fourteenth of November he was in Jefferson City and had taken a room in the Capitol, where he remained for a month or more painting portraits. Incidentally, he exhibited in his studio there the “Verdict of the People.” Early in December he spoke in a Whig meeting in the Capitol. March 14, 1856, he was in Columbia again, engaged upon a historical painting, “Washington Crossing the Delaware,” no doubt inspired by Leutze’s popular representation of the same subject, which it resembles markedly both in composition and in purpose. For many years the picture remained unfinished, and not until eighteen years after its beginning was it actually completed. It is a large canvas, and, like Leutze’s, it is crowded and confused and wholly impossible as far as truth to nature is concerned.” —-Fern Helen Rusk, George Caleb Bingham, The Missouri Artist (1917. Marquand ND237.B5 R8) 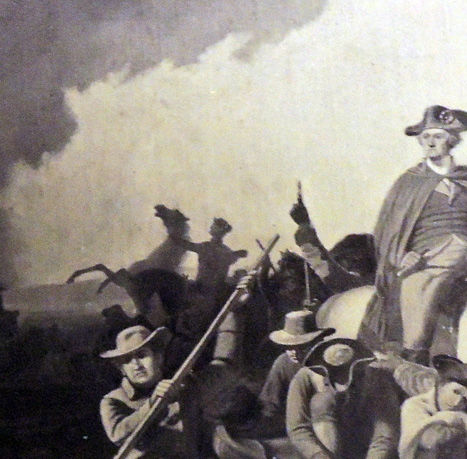 One of the changes Bingham made between 1865 and 1871 was to remove the horse and rider behind Washington and replace it with two less active soldiers. In general, the entire background is simplified, giving a stronger focus to the central figures. Below are a few of Bingham’s other changes. 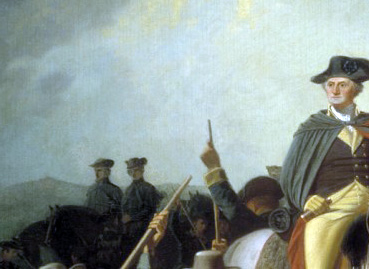 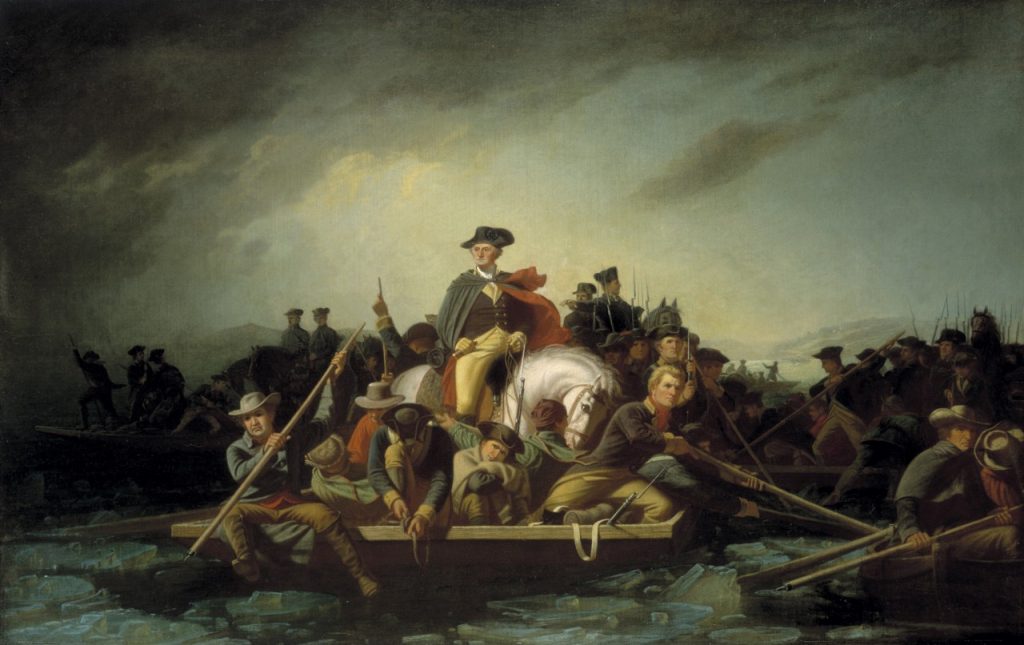 “The painting illustrates the historic crossing of the Delaware River by George Washington and his troops.  George Caleb Bingham paints Washington seated atop a horse, which forms the apex of a pyramid, with the oars creating the base of the triangular composition.  Artists create a sense of stability and balance by using this choice of arrangement. Washington’s huddled men row across the frozen river almost directly toward the viewer. Bingham added minor embellishments to the scene.  Washington was unlikely to have been mounted on his horse for the crossing.   It would have made the ride too unstable.  In addition, the event happened in the early hours of the morning, in the dark.  Regardless, the artist is still able to capture the tense and risky crossing occurring on December 25, 1776 in a perilous snowstorm, leading to the Battle of Trenton.”–Chrysler Museum 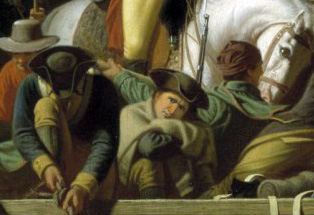 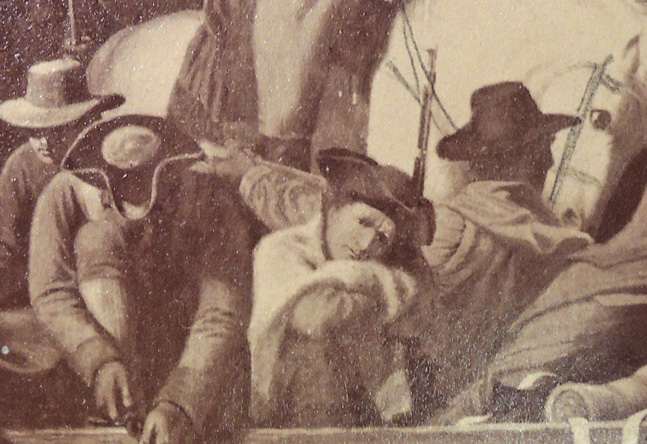 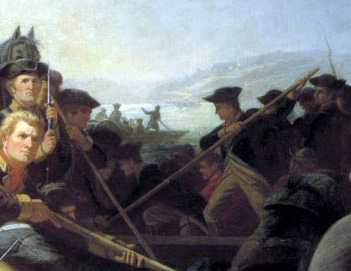 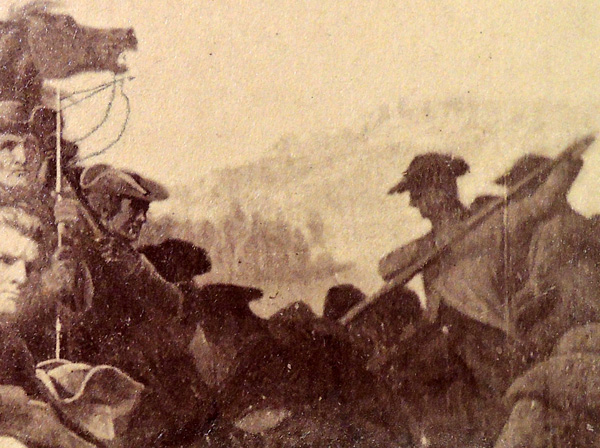