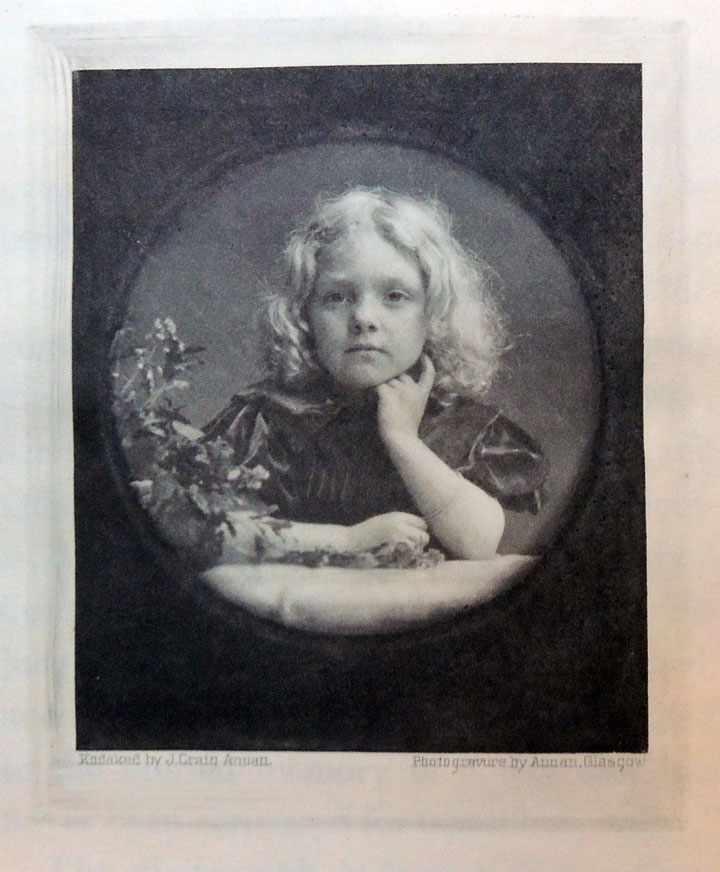 “Child Portrait” by Mr. J. Craig Annan. There is no more delightful occupation for the Kodaker than to photograph a charming child. The self-consciousness which so often spoils an otherwise capital model of more mature years is entirely absent, and the operator has full scope to exercise his skill in reproducing some of the childish graces of his dainty subject. The present picture was taken with a No. 4 Cartridge Kodak, and cut down to its present dimensions. 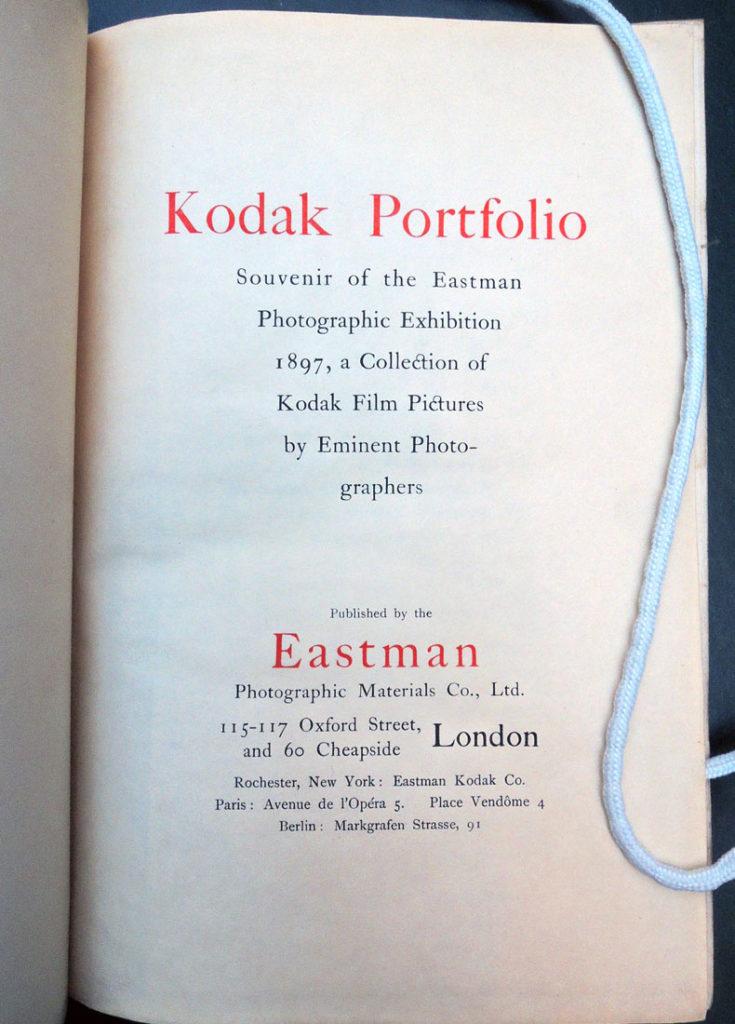 This edition de luxe of 14 photographs by eminent photographers is a souvenir of the Eastman Photographic Exhibition, held at the New Gallery, Regent Street, London, from 27th October to 16th November, 1897. It is aimed chiefly to exemplify some of the pictorial applications of the Kodak and film photography.

The pictures, without exception, are Kodak film pictures, and the assortment is specially arranged to illustrated a few of the various classes of subjects which can all be effectively exploited by Kodak photography.

We wish to express our hearty thanks to the eminent photographers who have kindly lent us their film negatives, from which the fine reproductions have been made by Mr. J. Craig Annan, of Messrs. Annan & Sons. 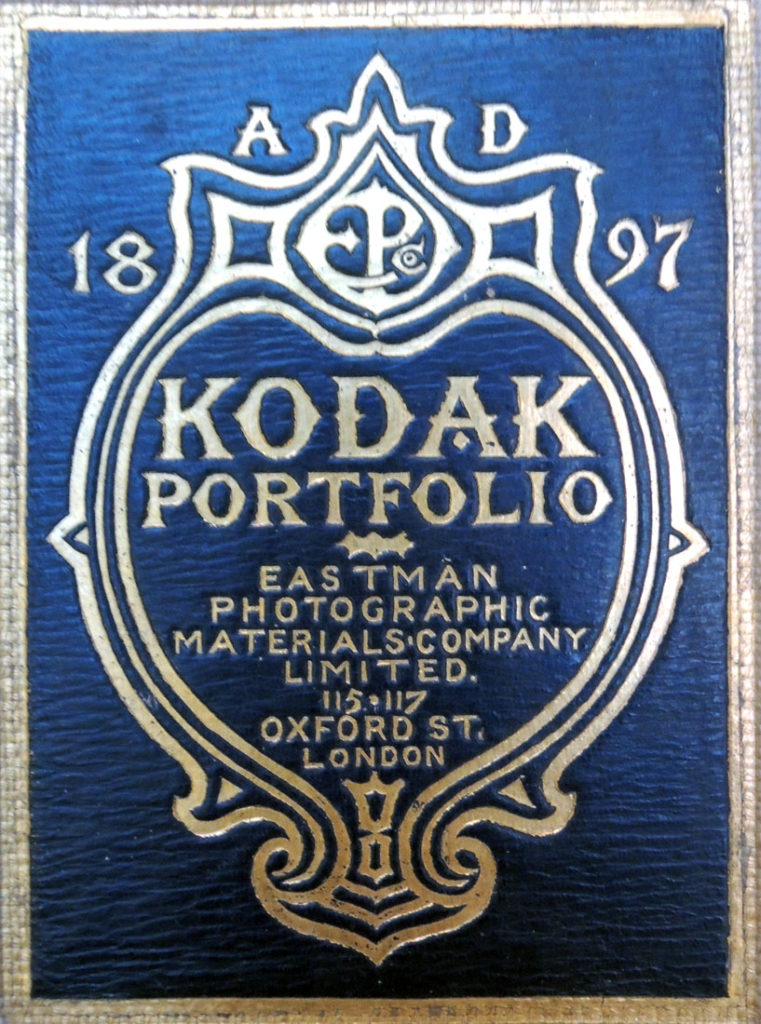 The design stamped upon leather on the cover is by Sir David Young Cameron RA (1865-1945).

Here are a few more examples from the catalogue. 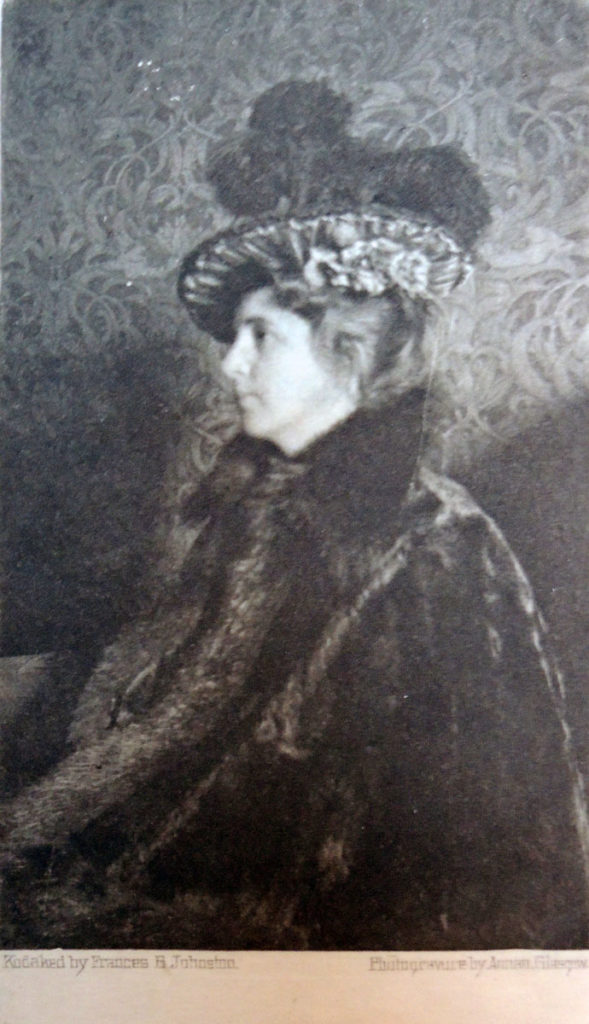 “A Portrait” by Miss Frances B. Johnston. This profile portrait has been specially taken by Miss Johnston for the Kodak portfolio. It furnishes another example of the successful use of the lighting of ordinary rooms for portraiture. The textures of the different surfaces represented are effectively rendered in the picture. The photograph was taken with a No. 2 Bull’s-Eye Kodak. 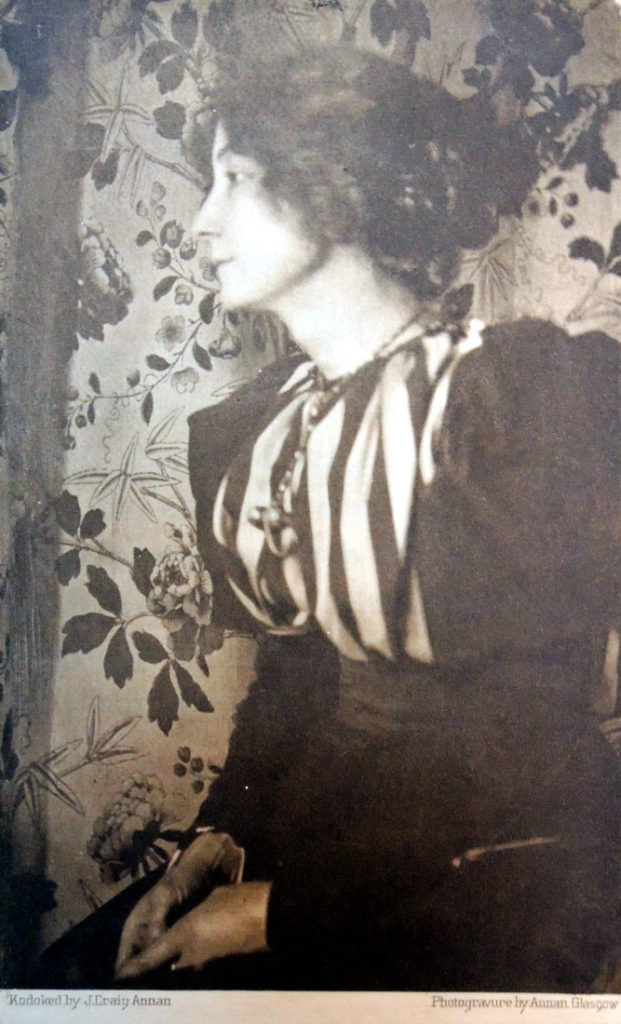 “Portrait of a Lady” by Mr. J. Craig Annan. The effect obtained in this picture is, as we feel it, made up of a selection of an interesting face, a simple pose, and a pleasing decorative arrangement of figure, costume, and background. The picture was taken with a No. 4 Cartridge Kodak. 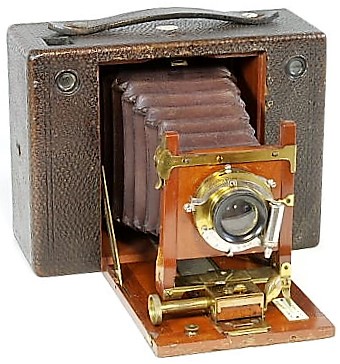 One example of the 1897 No. 4 Cartridge Kodak, the type used to make the negatives for several of these images.

“Night on a Norwegian Fjord” by Mr. Andrew Pringle. Mr. Pringle informs us that this picture was taken about 9 P.M. on a July evening on a Norwegian fjord. The boat is an old Norway lugger, and the curious lines in the water are waves formed in the wake of the steamer form which the photograph was taken. The negative was taken in a No. 4 Cartridge Kodak. 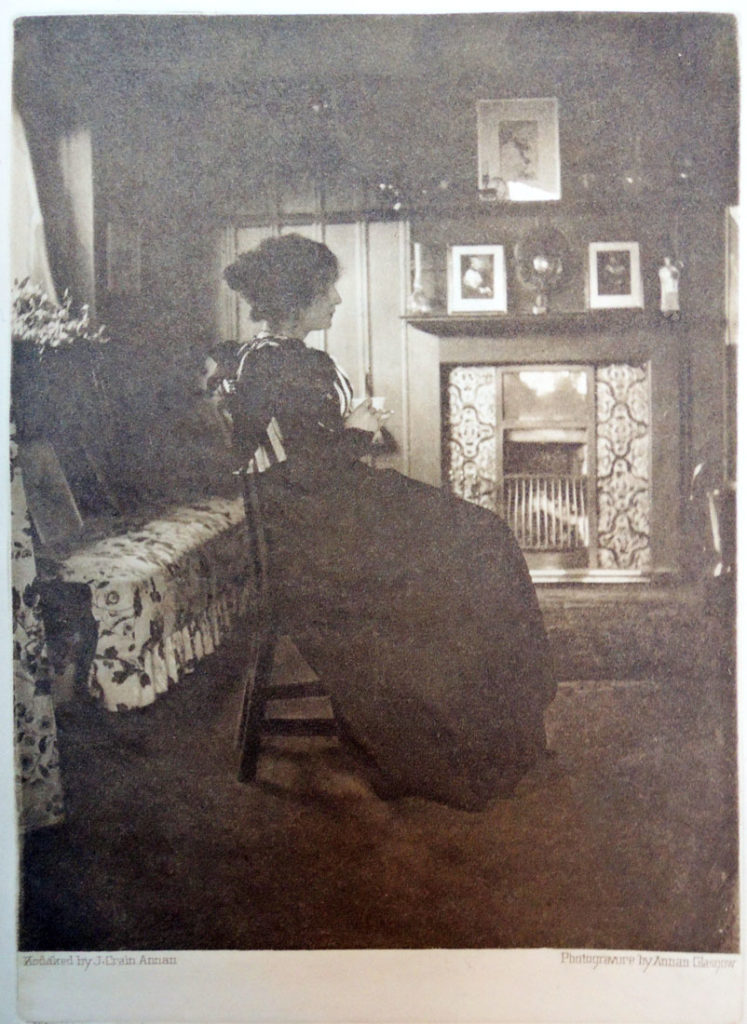 “Portrait with Interior” by Mr. J. Craig Annan. This little picture shows what can be done with the Kodak in the way of home portraiture. The complete figure is shown gracefully posed in an interesting light, and suggests a more natural portrait than one generally finds in a studio photograph. Photographers  would do well to make more experiments with the lighting secured by a judicious use of their ordinary domestic rooms. The negative was taken with a No. 4 Cartridge Kodak. 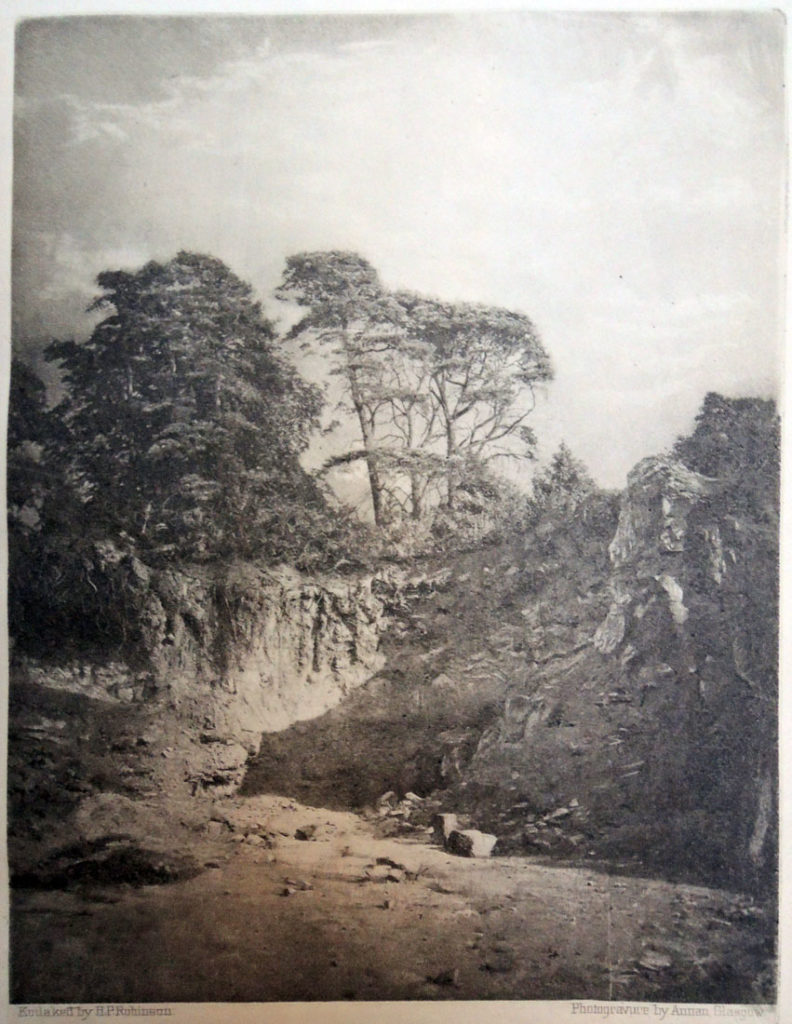 “Rusthall Quarry” by Mr. H.P. Robinson. In response to a request for a note upon his picture, Mr. H. P. Robinson kindly writes as follows: This little known but very picturesque dell is part of the beautiful Rusthall Common, near Tunbridge Wells, of which it is part. Although it is most accessible it is so hidden in the hollow between the rocks of the disused quarry and some rising ground and tall trees, that few lovers of the picturesque find their way into it.

For thirty years it has been a happy hunting-ground that almost seemed my own, both for photography and natural history. I feel ashamed of appropriating so much beauty to myself, and should be glad to see other photographers at work in it. There are plenty of subjects for all. We think no one can fail to recognize in this picture a delightful effect of a kind which is associated in our minds with many beautiful old engravings. The negative was taken with a No. 4 Cartridge Kodak. 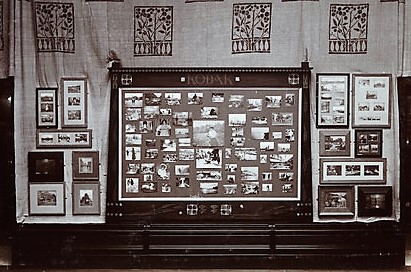