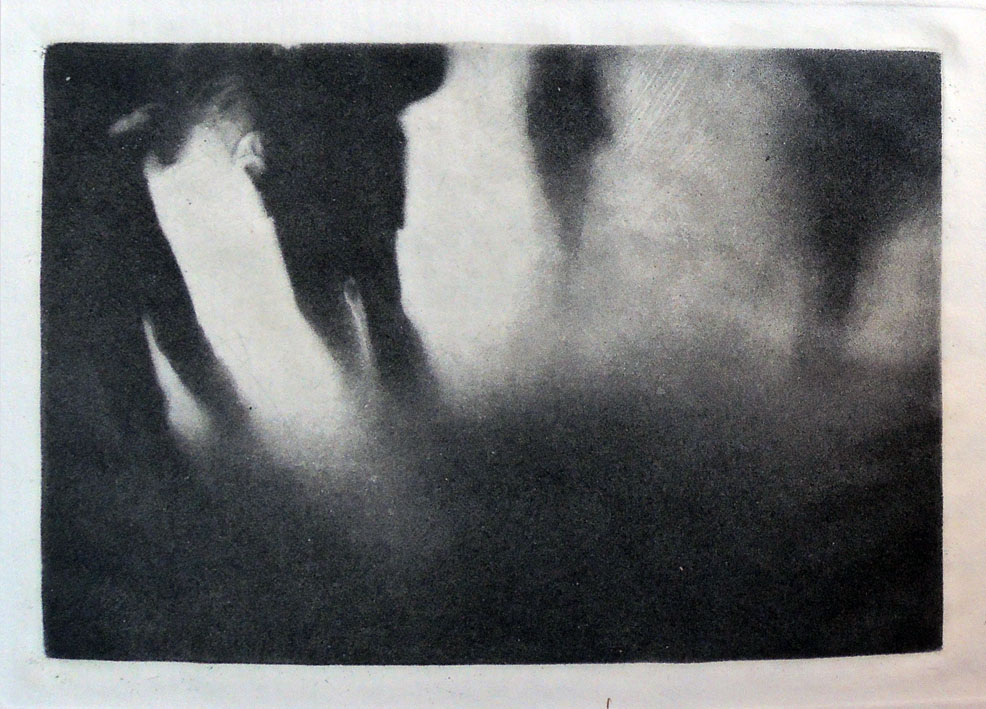 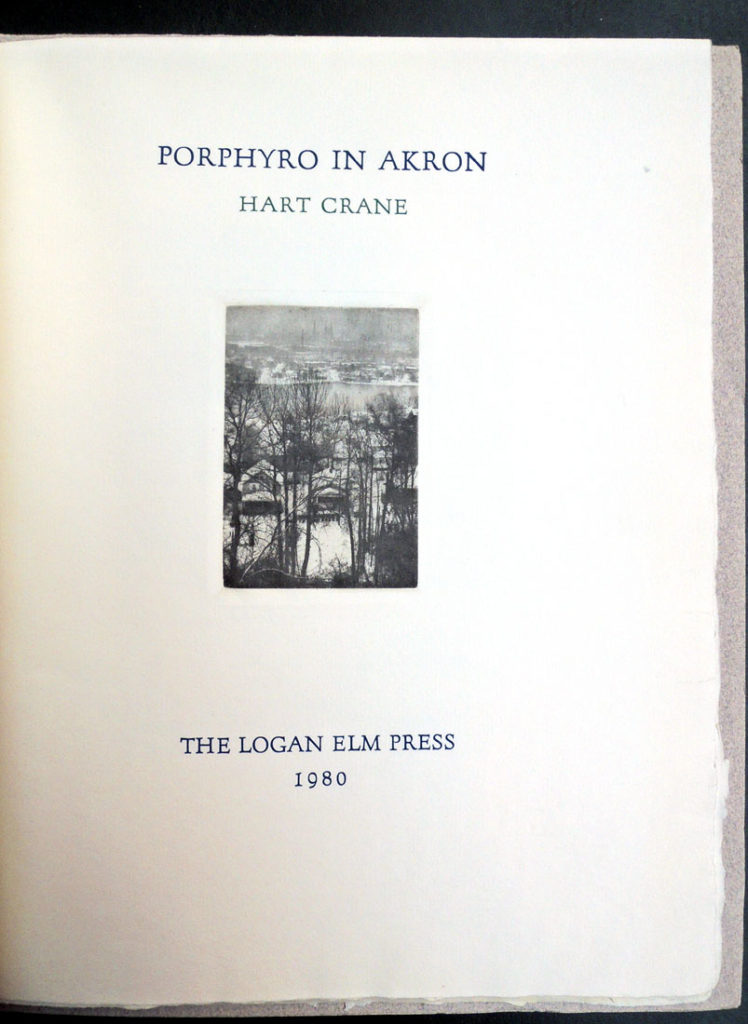 Many of you know Andrew Cahan as an expert in photographic literature but did you know he was also an artist? The Graphic Arts Collection recently acquired Hart Crane”s Porphyro In Akron (1980) with three photogravures by Cahan. He was kind enough to tell the story behind this project:

“As a preamble to the genesis of the book, I was living in Brooklyn Heights, having moved there to work as Mary Ellen Mark’s darkroom printer. When my tenure there was over, I started taking some classes at the Center for Book Arts in lower Manhattan.

Around 1978-79, I decided it was time to go back to graduate school so I could have access to the equipment needed to teach myself the photogravure process. I made a few calls to faculty friends at OSU and scored an assistantship in the photo department (prior, I had my BA from there in photo and a year as a resident student with Minor White) so they knew me fairly well and said ‘come back.’

When I landed in Columbus, Bob Tauber had just been hired to start the Logan Elm Press. Somehow we met and I became the first student to work with him. It took me almost a year to make a viable photogravure plate. I had some books which I consulted and doggedly kept at it. The first project was [a] broadside, TO GOUDY w/ LUV. I think I printed 65 or so. 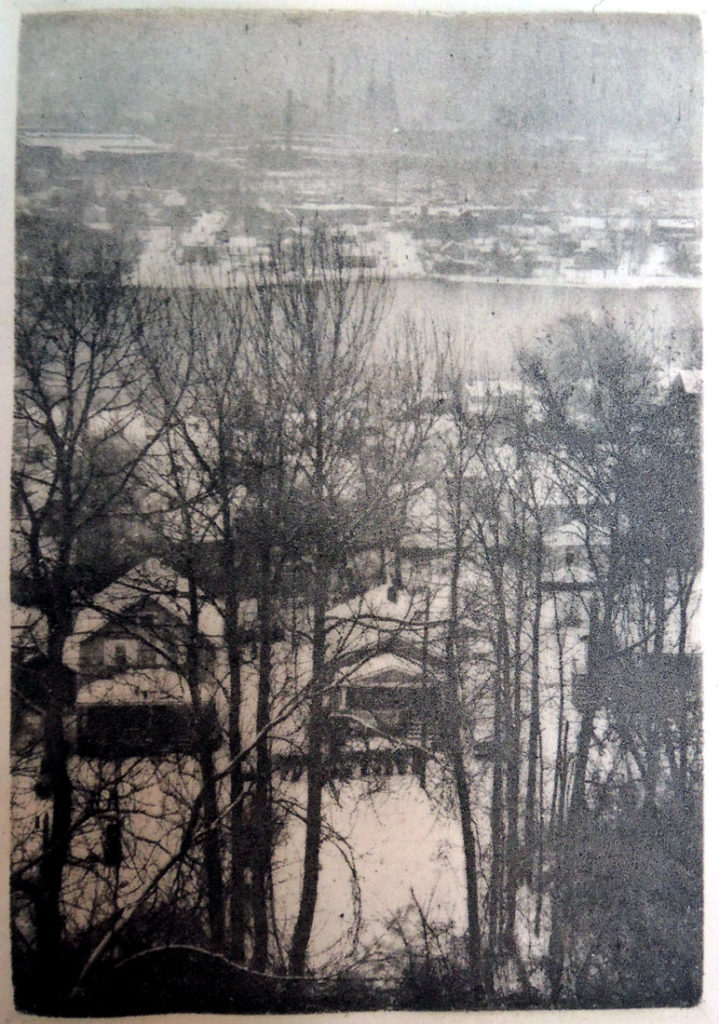 Once that was done and I proved to Bob that I could make a good plate and set the type, etc, he gave me the signal to start Porphryo In Akron. The connections to this poem are as follows…

Hart Crane lived here as a young man, for a short time. I grew up in Akron [and] moved to Brooklyn Heights, as did he in an apartment overlooking the bridge. Walker Evans used three images in The Bridge, so I would too.

The photos are from three locales. The opening image [right] is of the B.F. Goodrich plant in Akron from a nearby hill. The second image [below] was from my apartment window in Brooklyn Heights, looking towards Hart Crane’s apartment. And the final image [top] was made in a club in Columbus on the night of my 31st birthday. I used a 4×5 view camera and a Leica.”

Hart Crane (1899-1932), Porphyro In Akron (Columbus, Ohio: Logan Elm Press, 1980). Three photogravures by Andrew Cahan. One of 100 copies. Graphic Arts Collection Q-000233. Colophon: “Hart Crane wrote this poem in 1920 while he was working in Akron, Ohio. An early draft was included in a letter to his friend Gorham Munson and is now in the Special Collections of The Ohio State University Libraries. Its first appearance in print was in The Complete Poems & Selected Letters and Prose of Hart Crane, Liveright Publishing Corporation, New York, 1966.” 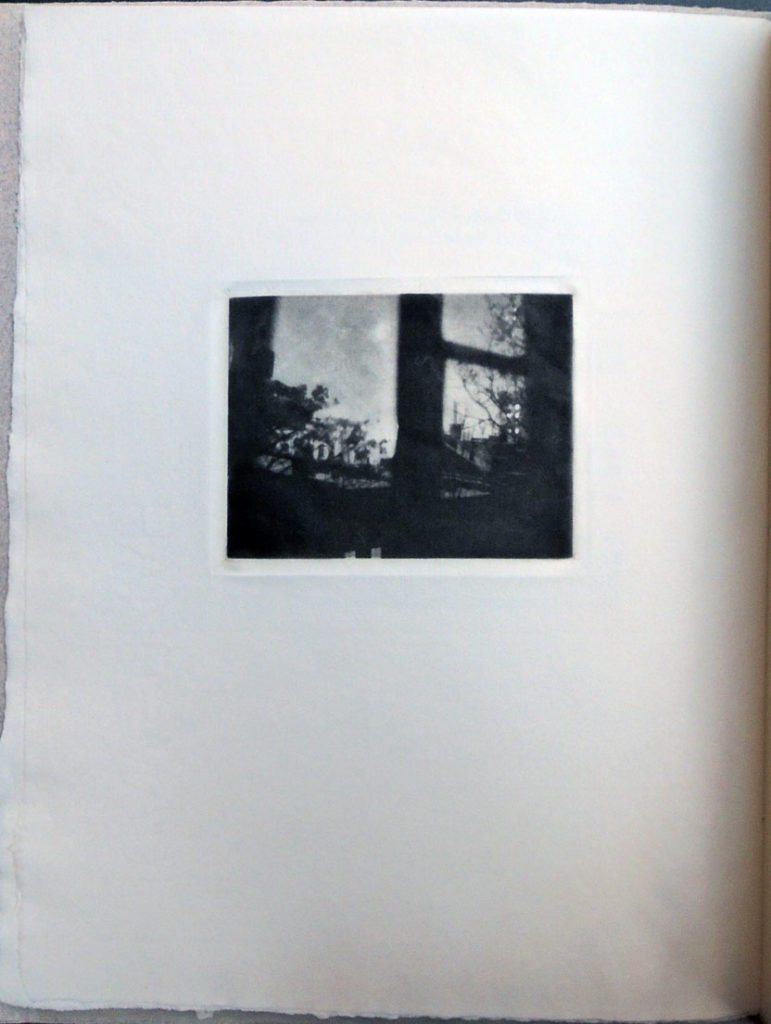 I
Greeting the dawn,
A shift of rubber workers presses down
South Main.
With the stubbornness of muddy water
It dwindles at each cross-line
Until you feel the weight of many cars
North-bound, and East and West,
Absorbing and conveying weariness, —
Rumbling over the hills.
Akron, ” high place ” —
A bunch of smoke-ridden hills
Among rolling Ohio hills.
The dark-skinned Greeks grin at each other
in the streets and alleys.
The Greek grins and fights with the Swede, —
And the Fjords and the Aegean are remembered.
The plough, the sword,
The trowel, — and the monkey wrench!
O City, your axles need not the oil of song.
I will whisper words to myself
And put them in my pockets.
I will go and pitch quoits with old men
In the dust of a road.