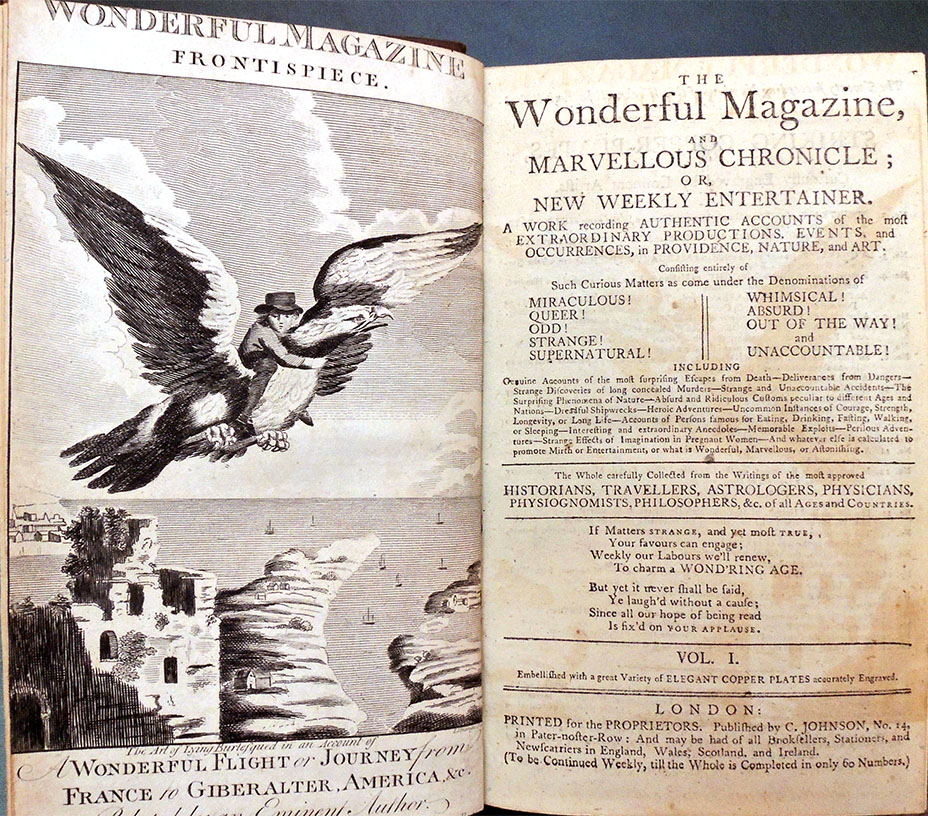 The Wonderful Magazine Or Marvellous Chronicle; Or New Weekly Entertainer. A Work Recording Authentic Accounts of The Most Extraordinary Productions, Events, And Occurrences, In Providence, Nature, And Art… (London: Printed for the Proprietors, Published By C. Johnson, 1793).    Volumes 1-5. Graphic Arts Collection GAX 2019- In process. 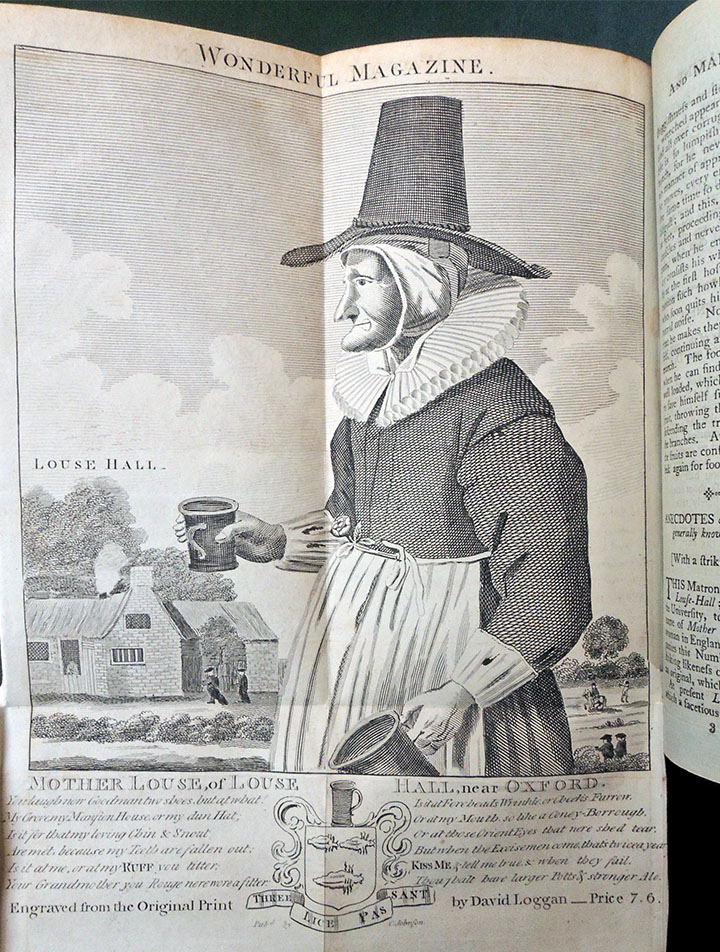 Portrait of an innkeeper known as Mother Louse of Louse Hall, a famous establishment outside the city of Oxford; fanciful coat of arms bottom center: three lice surmounted by a tankard, motto on banner underneath, ‘Three liese pas-sant’ (a re-issue). 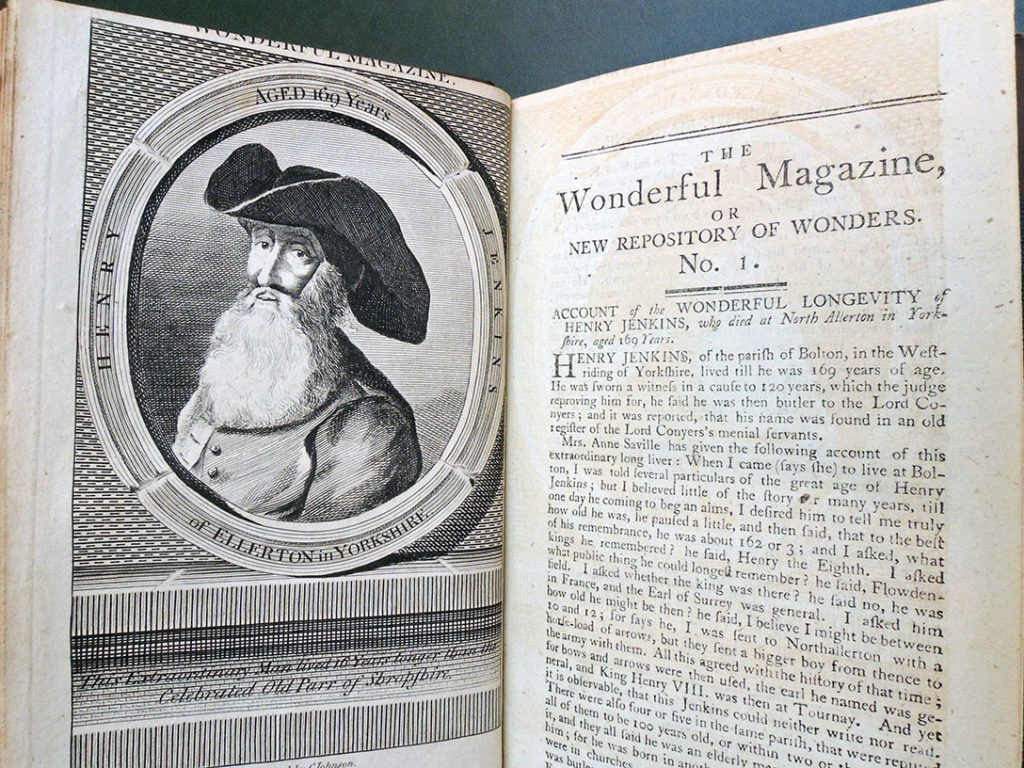 The following Forty Numbers of this Work (making only Sixty in the whole) will be enriched with a great Variety of engravings, equally extraordinary, Wonderful, Marvellous, Astonishing, and Interesting, too numerous to mention here. every future Number will therefore be Embellished with One or two most Elegant engravings, consisting of the most Extraordinary, Wonderful, and Rare Productions in Nature and Art, drawn and engraved by eminent Artists, among which will be included many Large Quarto Copper-plates, containing extraordinary Representations, which cannot be included in a less Size. 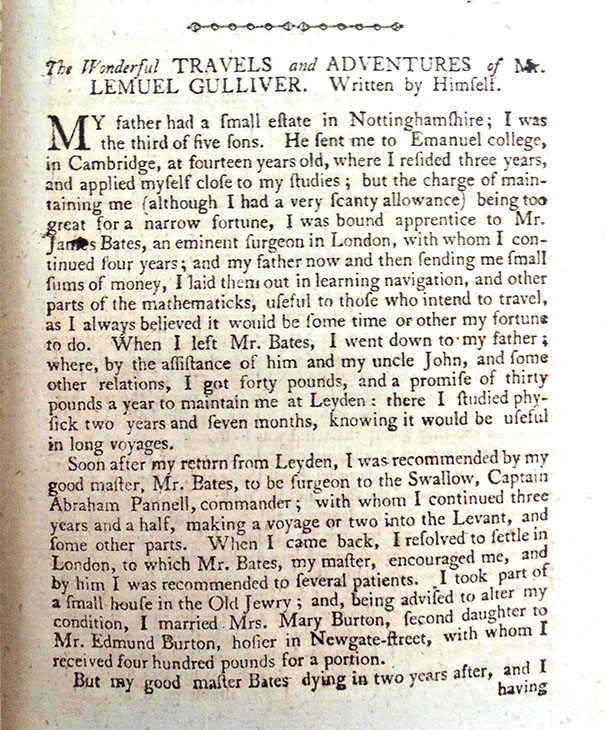 The frontispiece of the first volume is labeled, “The Art of Lying Burlesqued in an Account of A Wonderful Flight or Journey from France to Gibraltar, America, &c. Related by an Eminent Author,” which may refer to Jonathan Swift’s Gulliver’s Travels (1726) included in serial form throughout the first three volumes. 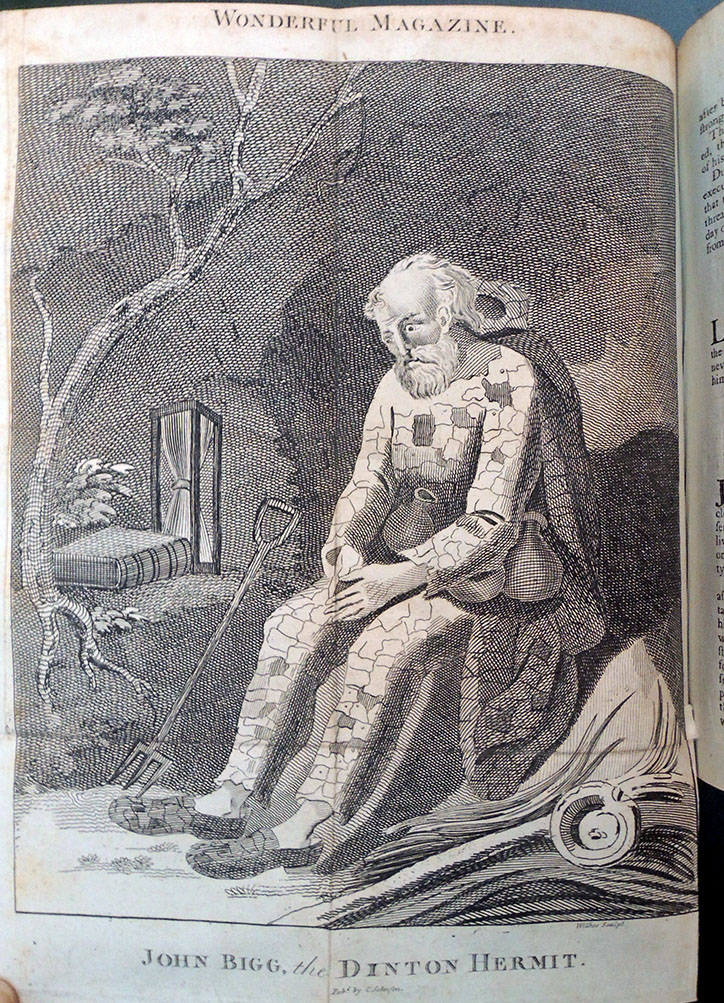 The story of John Bigg, the Dinton Hermit, who only wore leather. 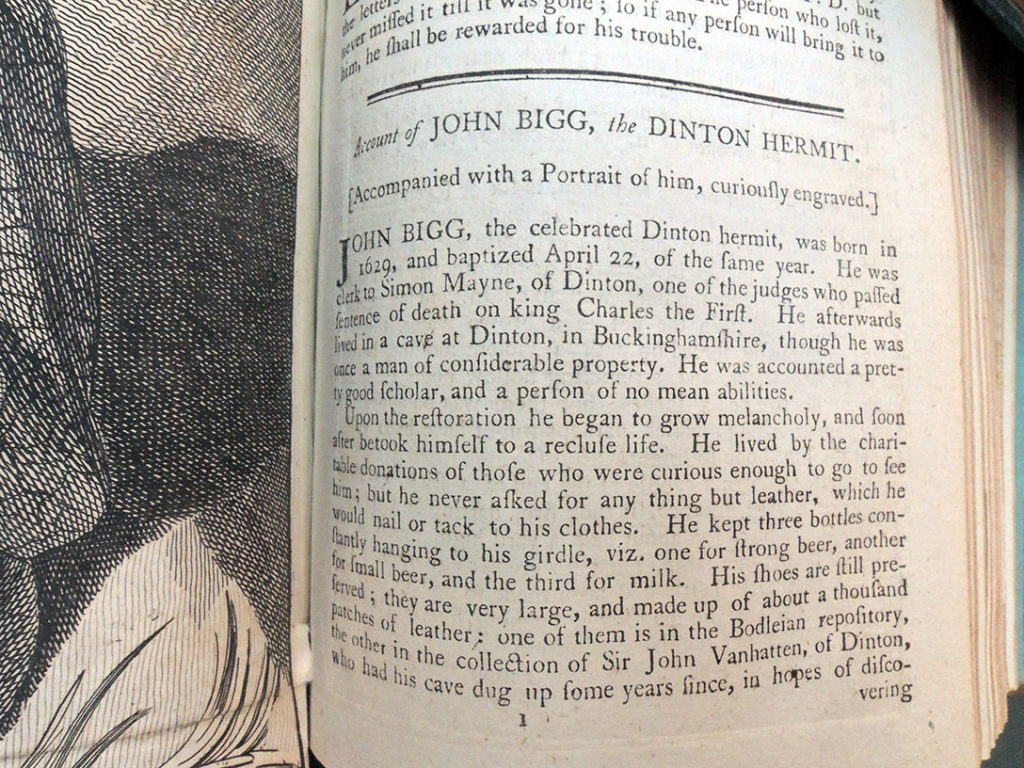 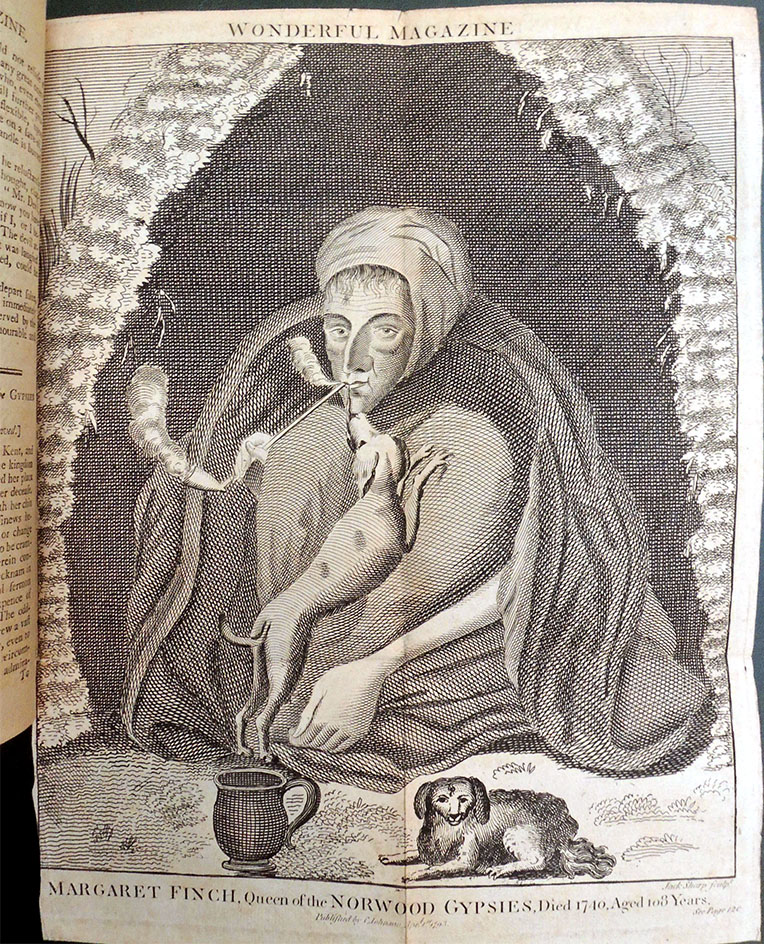 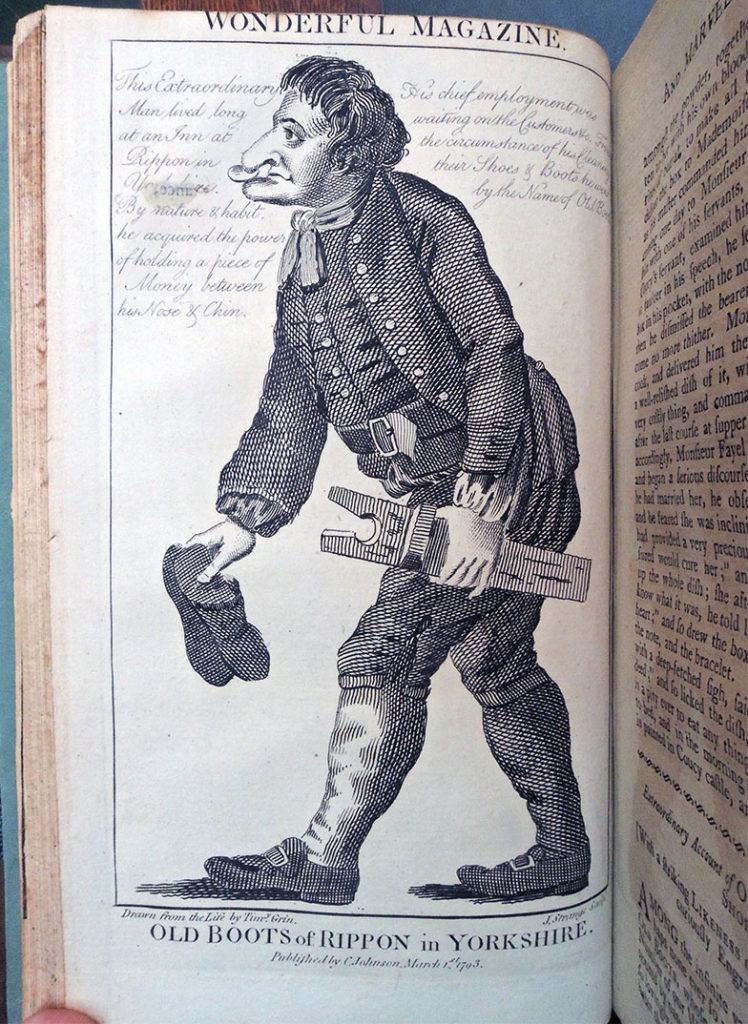 “Old Boots of Rippon in Yorkshire” shown with his ability to hold a coin between the tips of his nose and chin.

Subtitled: “Consisting entirely of Such Curious Matters as come under the Denominations of Miraculous!, Queer!, Odd!, Strange!, Supernatural!, Whimsical!, Absurd!, Out Of The Way! and Unaccountable! including Genuine Accounts of the most surprising Escapes from Death – Deliverances from Dangers – Strange Discoveries of long concealed Murders – Strange and Unaccountable Accidents – The Surprising Phenomena of Nature – Absurd and Ridiculous Customs peculiar to different Ages and Nations – Dreadful Shipwrecks – Heroic Adventures – Uncommon Instances of Courage, Strength, Longevity, or Long Life, Accounts of Persons Famous for Eating, Drinking, Fasting, Walking, or Sleeping – Interesting and extraordinary Anecdotes – Memorable Exploits – Perilous Adventures – Strange Effects of Imagination in Pregnant Women – And whatever else is calculated to promote Mirth or Entertainment, or what is Wonderful, Marvellous, or Astonishing. – The Whole carefully Collected from the Writings of the most approved Historians, Travellers, Astrologers, Physicians, Physiognomists, Philosophers, &c. of all Ages and Countries. – Embellished with a great Variety of Elegant Copper Plates accurately Engraved.” 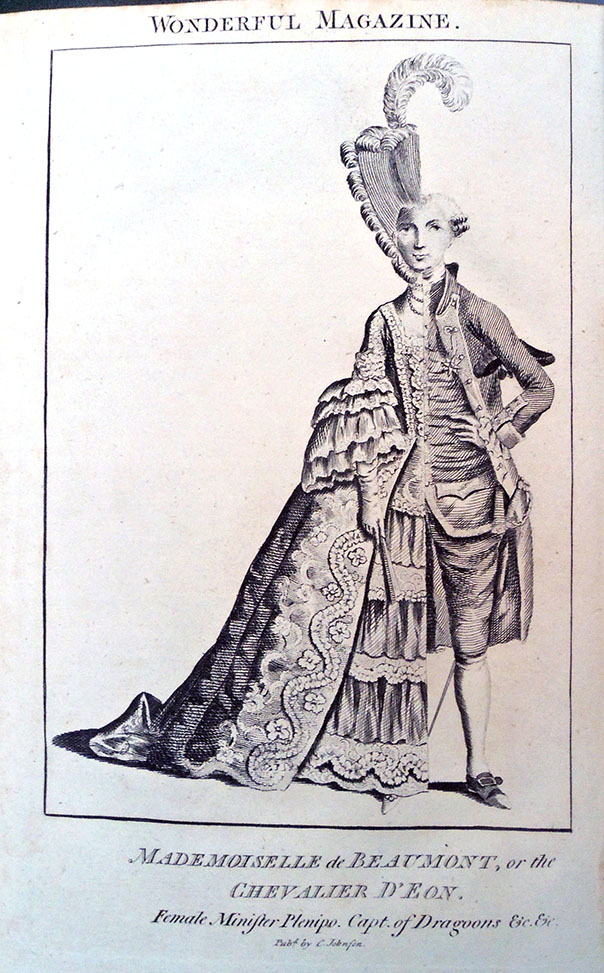