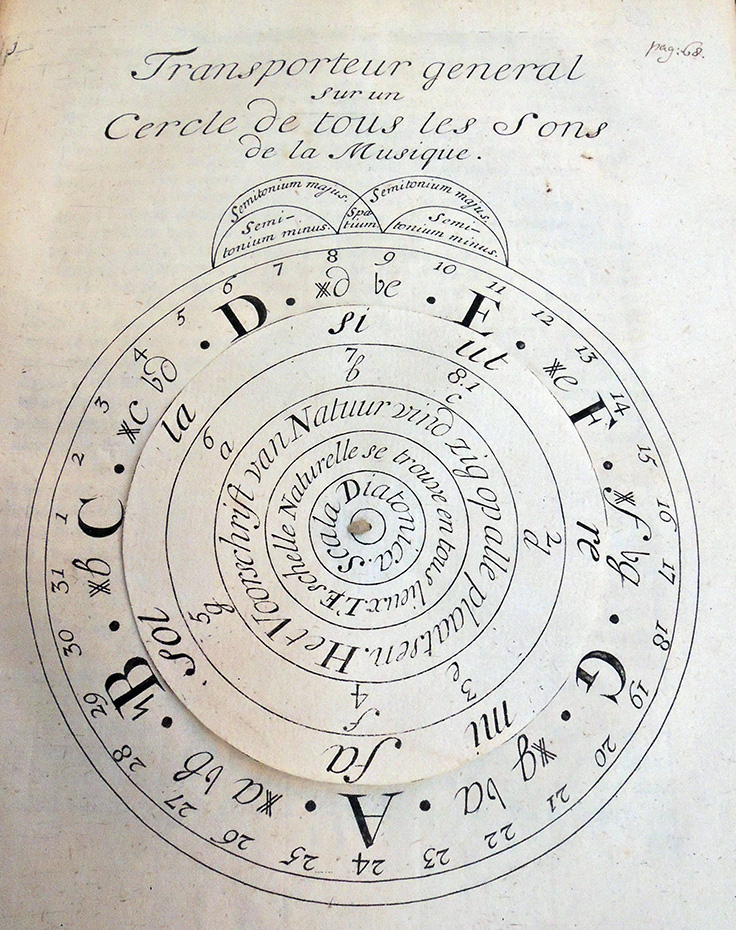 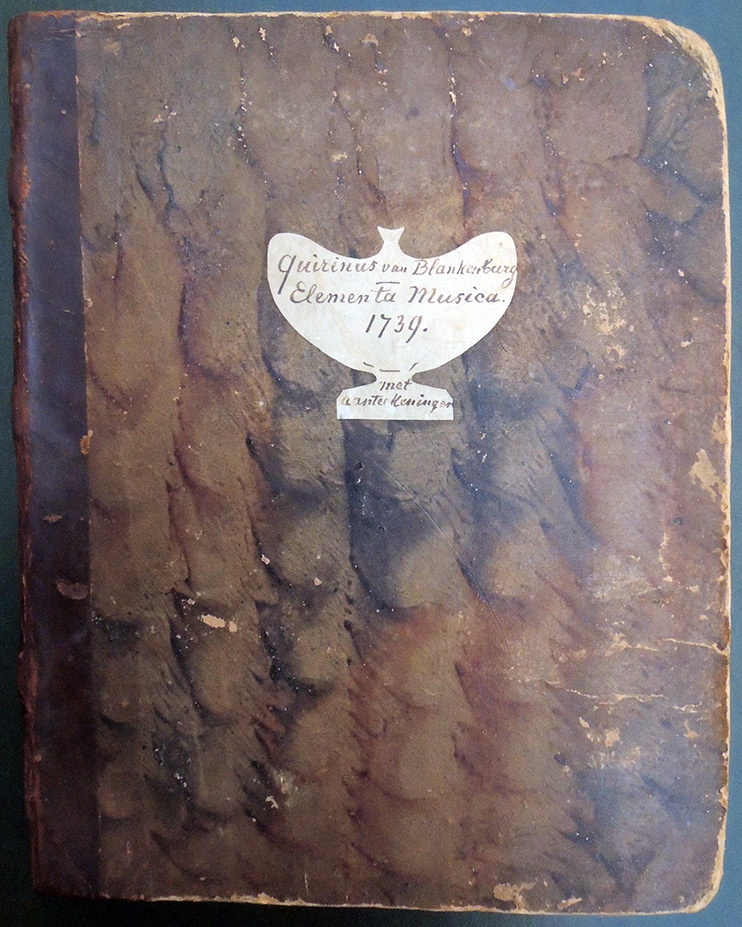 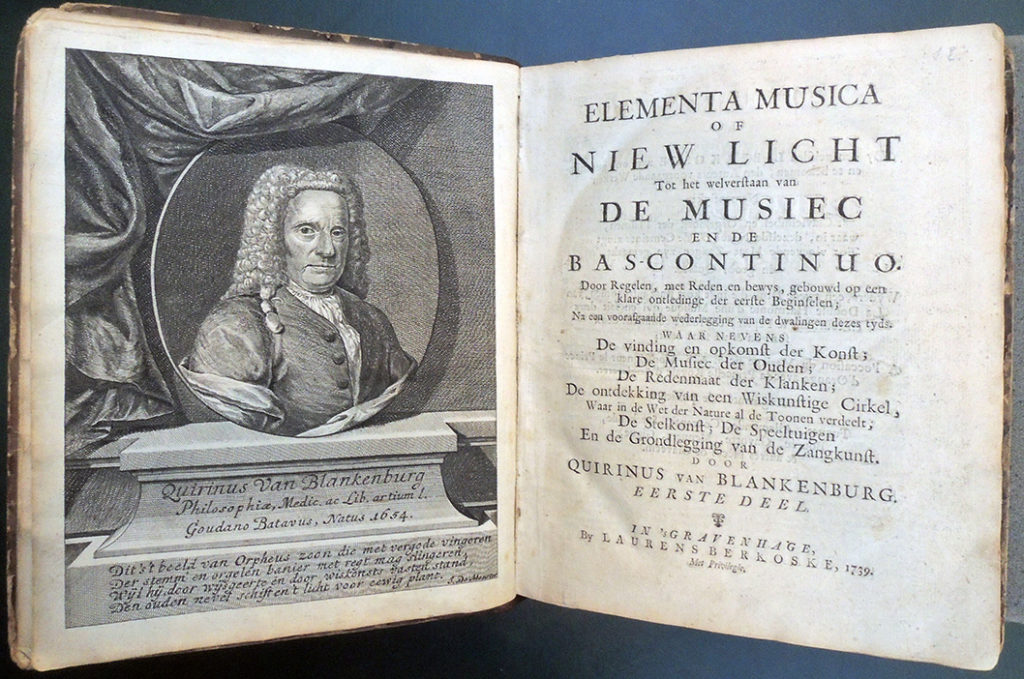 This unusual volume by Quirinus van Blankenburg lays out his principles of music theory both in text and diagrams, including several working volvelles. The dealer’s description is quoted here in full:

‘Quirinus van Blankenburg (1654-1739), son of an organist, followed in his father’s footsteps when he was sixteen, first in Rotterdam, Gorinchem, and then the Waalse Kerk in Den Haag; in 1699 he was appointed organist at the Nieuwe Kerk in Den Haag. Van Blankenburg matriculated at the University of Leiden and became a well-known teacher of music. His earliest work for harpsichord, a Preludium full of ornaments and sudden changes in tempo, is found in the London Babell MS (British Library Add. MS 39569) from 1702.

None of his earlier works have survived, though it seems likely that he would have started to write music early in his life. From the works that we know now he comes across as an experienced composer.’ ‘Van Blankenburg published three works toward the end of his life, though it is possible that he wrote them earlier ….The majority of van Blankenburg’s keyboard works are short, the most elaborate being the Fuga obligata, published in his treatise Elementa musica, 1739, which covers basso continuo and other subjects, including details about enlarging the ambitusof harpsichords. Interestingly, a fugue with the same theme had been published by G. F. Handel in 1735, and, although the autograph of this fugue dates from around 1720, van Blankenburg accused Handel of plagiarism! He seems to be the first in the Netherlands to mention overlegato, which he calls “tenue”, and his fingerings are based on those found in François Couperin’s L’art de toucher le clavecin(1716)’ (Ton Koopman, ‘The Netherlands and Northern Germany’, in TheCambridge companion to the harpsichord, ed. Mark Kroll, 2019, pp. 71-92, pp. 77-8).

The contemporary annotations in this copy, which deserve further study, are frequently of the character one might expect an author to make in preparing his work for a further edition. Certainly the changes to punctuation and sentence structure would be unusual in even the most assiduous reader. However, a clarificatory marginal note on p. 99, referring to the plate opposite p. 119 (‘De Wet der Nature’), reads ‘van’t Orakel der Natuur, Q: V: B: [i.e. Quirinus Van Blankenburg]’, which perhaps suggests that the annotator was not the author. It must also be remembered that Van Blankenburg died in the year of publication. Whatever the case, the annotator was certainly someone of considerable musical learning.Hirsch I 73; RISM, Écritsp. 15 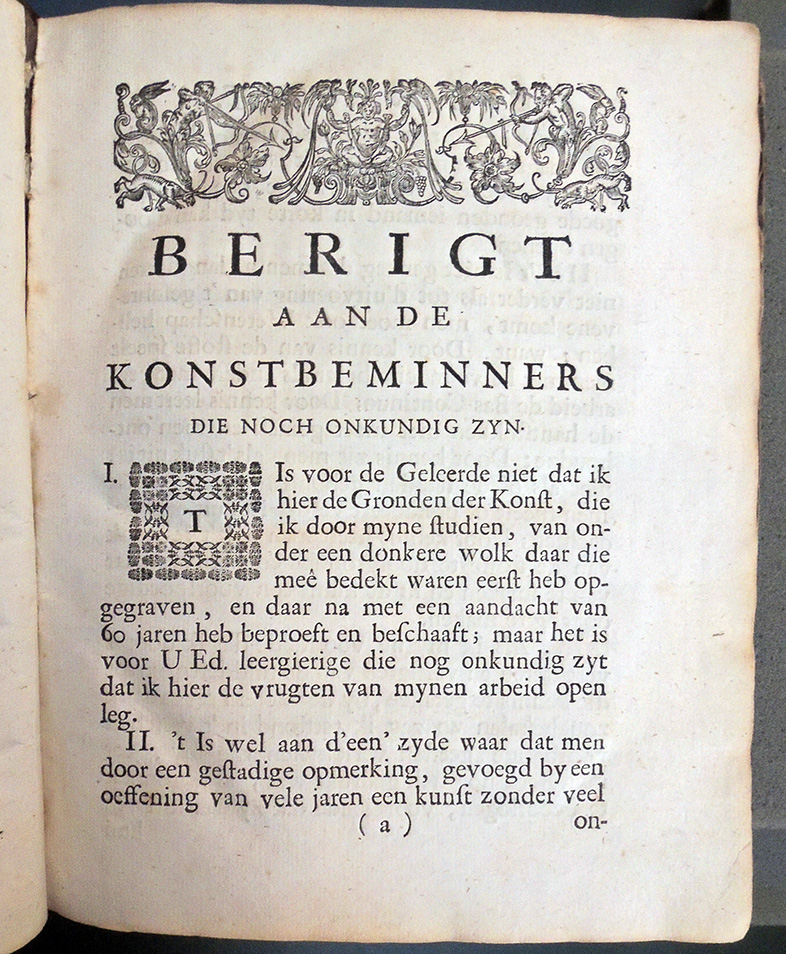 Reports to the art lovers who do not seem ignorant 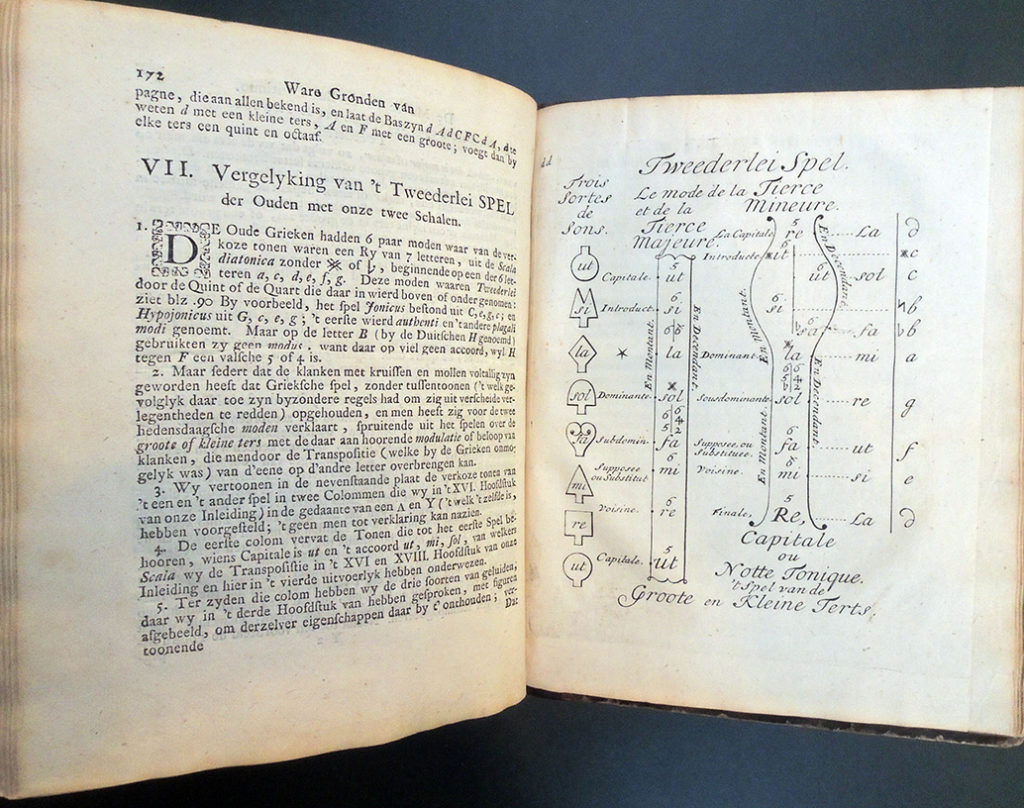 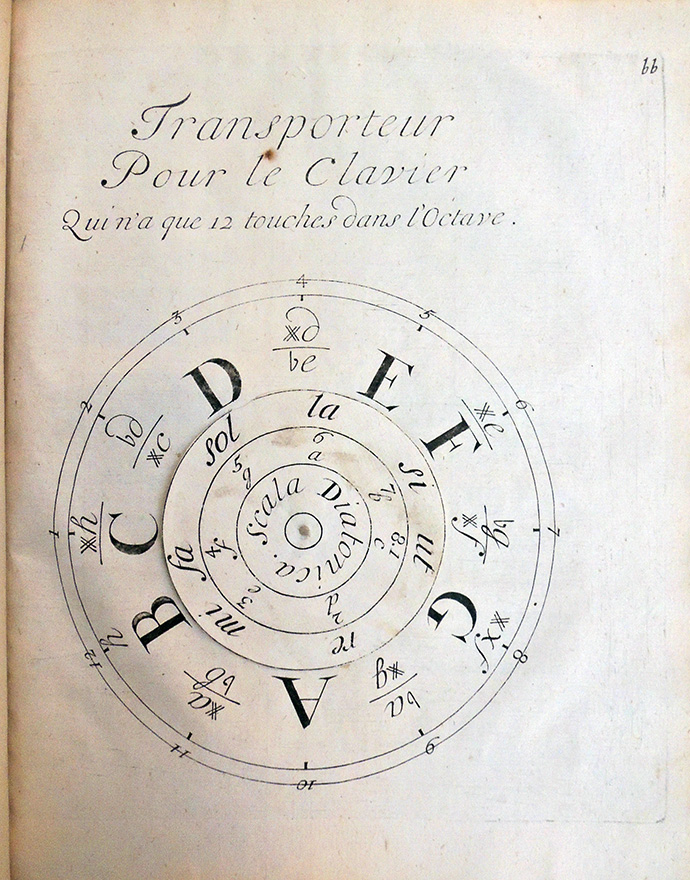 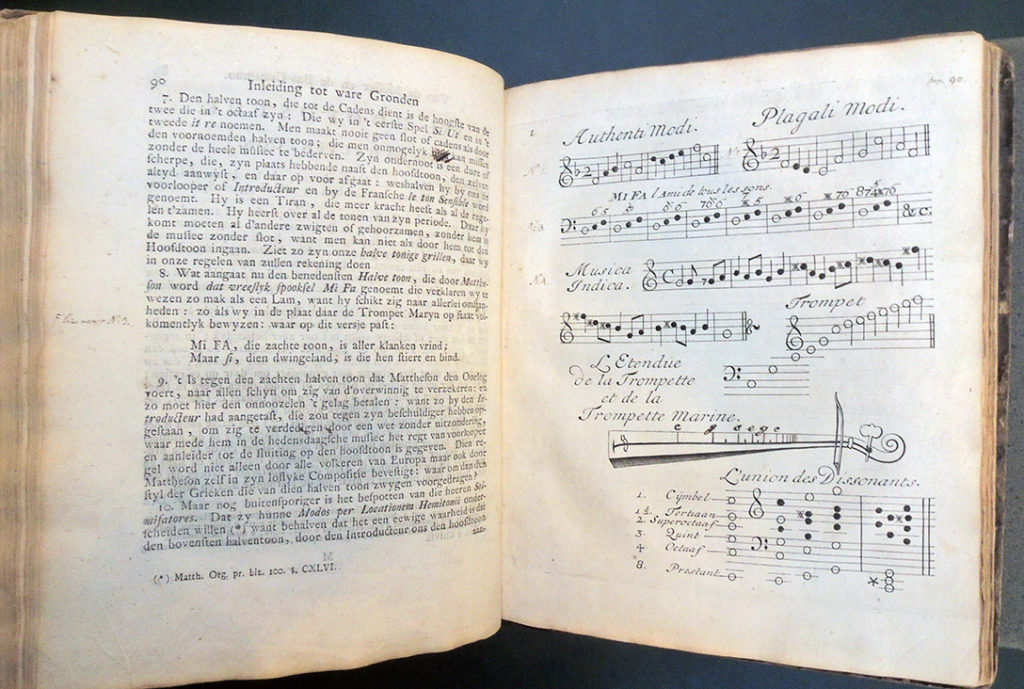 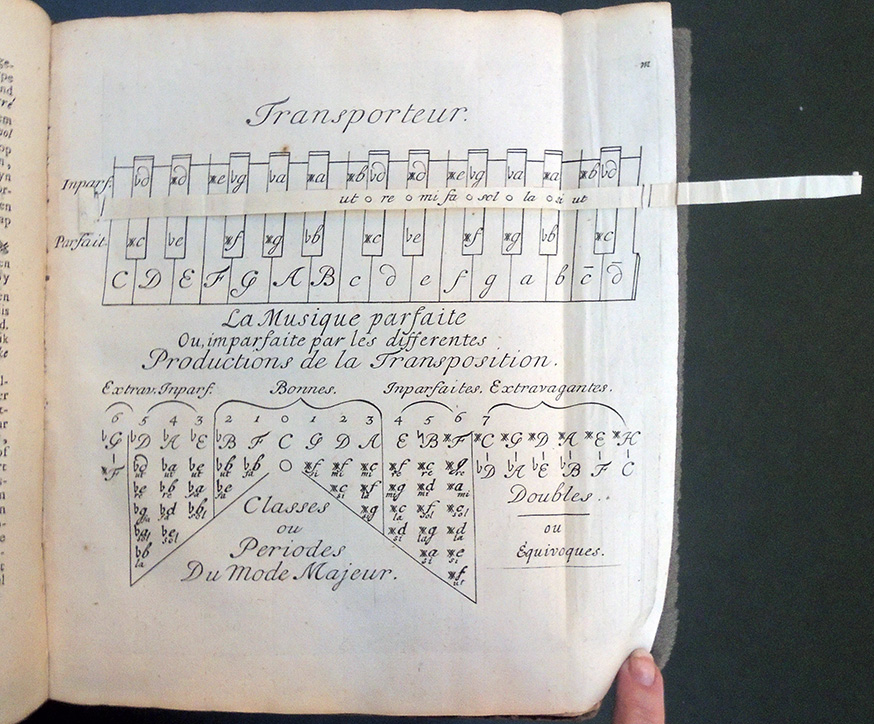 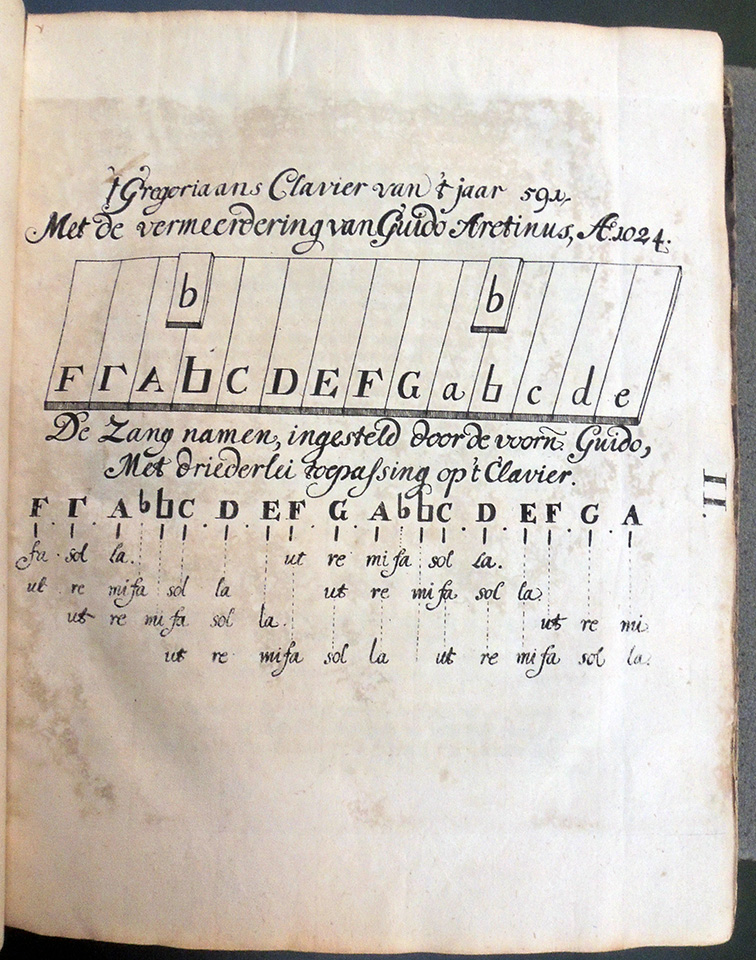 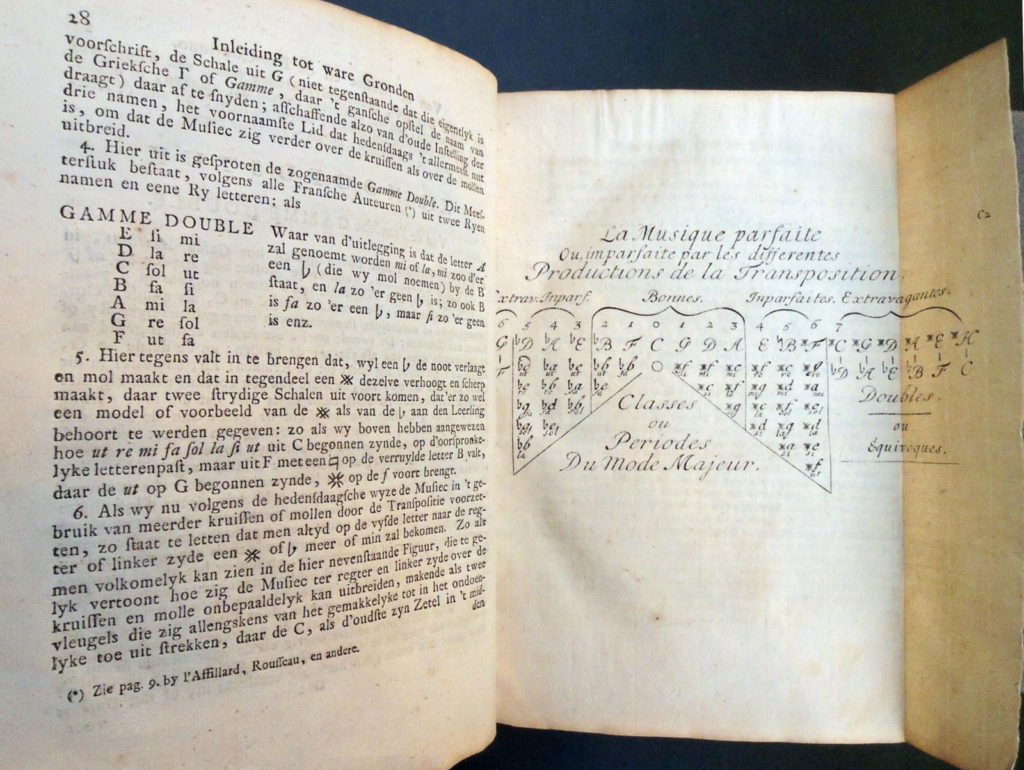