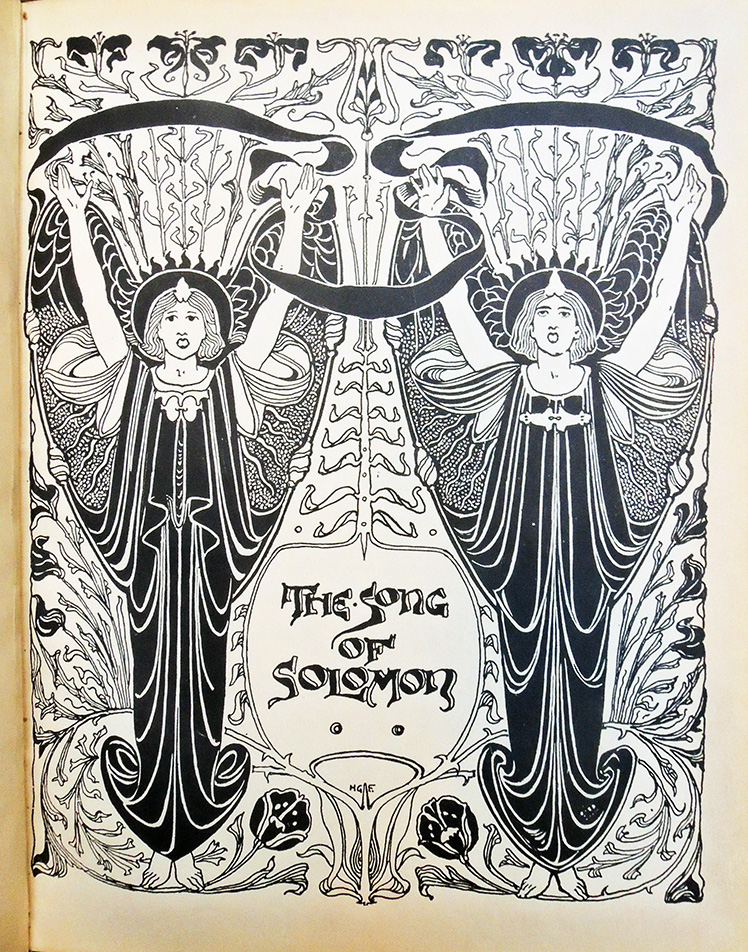 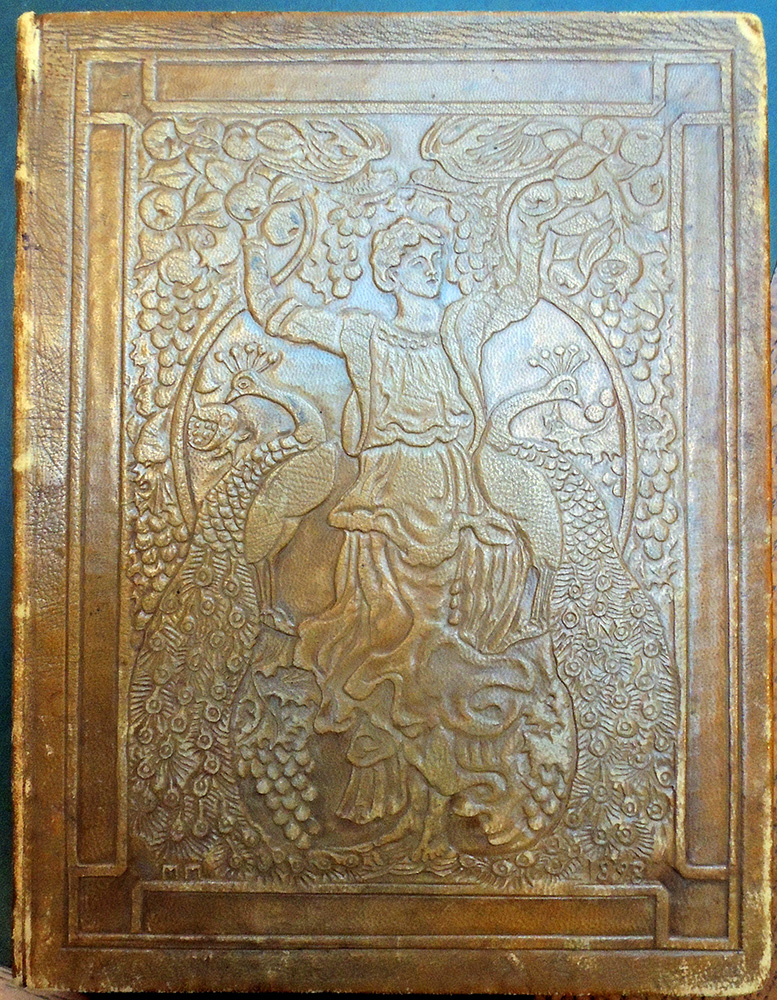 The Graphic Arts Collection recently acquire a copy of The Song of Solomon designed and illustrated by Herbert Granville Fell (1872-1951) with a binding by Annie S. MacDonald (1849-1924) (London: Guild of Women Binders, Chapman and Hall, printed by William Clowes and Sons, 1897). “Of this special edition on Japanese paper only 100 copies have been printed, for the Guild of Women Binders.”–Page 1. This is copy 8 of 100. 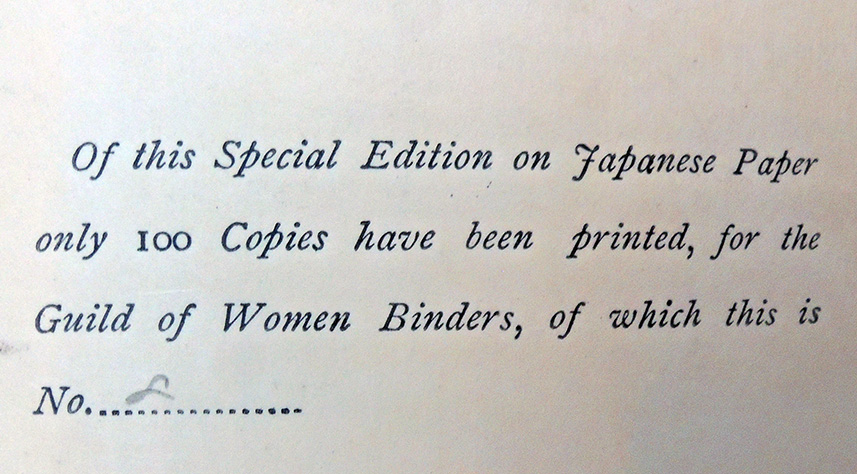 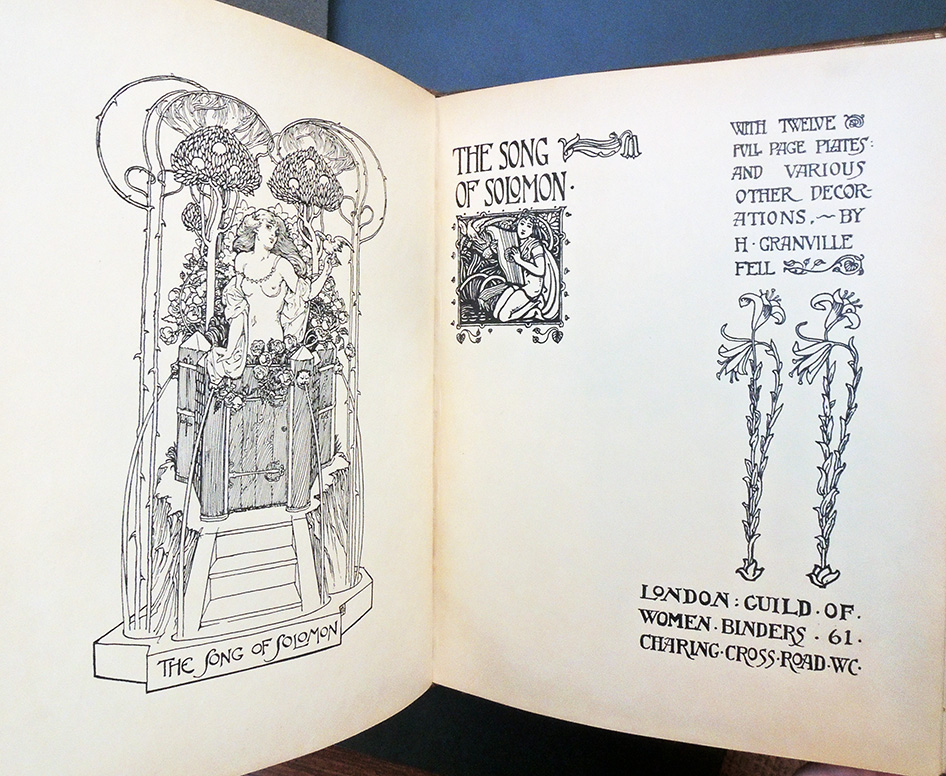 The founding of the Guild of Women-Binders and Annie MacDonald’s part in the organization has been repeated on many webpages and catalogues. Here it is from the American Bookbinders Museum post “The Bindings of To-morrow”:

The Guild of Women Binders was founded by Frank Karslake, a London bookseller and also founder of the Hampstead Bindery. Karslake was a bit of a rogue, who dabbled in multiple professions ranging from acting to ranch management, before trying his hand at bookselling and bookbinding. His interest in women binders emerged from his admiration of bindings exhibited at the Victorian Era Exhibition in 1897. Soon after seeing these examples, he invited several of the women binders to exhibit in his shop.

This exhibit, Exhibition of Artistic Bookbinding by Women, confirmed to Karslake that maybe women really could distinguish themselves in this industry. Perhaps he saw an opportunity to profit from the novelty of women binders, but soon after, Karslake acted as agent to prominent binders like Constance Karslake, Edith de Rheims, Florence de Rheims, Mrs. Macdonald, Helen Schofield, Frances Knight, and Lilian Overton (to name a few). In 1899, Karslake’s vision evolved into the workshop and business venture that became the Guild of Women Binders. Women involved in the guild were typically middle class and had a background in artistic education.

When Karslake first conceived of the idea to compile a book, publishers refused it because books on bindings were said to be unprofitable. A warning which Karslake ignored when he published The Bindings of To-morrow himself in 1902, with the assistance of W. Griggs who printed an edition of 500 copies. [Graphic Arts Collection 2008-2402N] This book provides a unique historical insight into the binding process and a glimpse into the under-represented work of women binders. A year after publication, Karslake was forced to offer the remaining 150 copies of the book to booksellers at a fraction of the original price.

In the catalog, The Bindings of To-morrow, Annie MacDonald’s entry includes autobiographical text: “Mrs. Macdonald writing in 1897, when her work was shewn at the “First exhibition of Bookbinding by Women”, said: ‘It began about six years ago, with myself and the late John M. Gray, curator of the Scottish National Portrait gallery. We took great pleasure in searching out and enjoying old bindings in libraries, both at home and abroad and felt that it was a beautiful art, but now fallen to be only a trade. Then we wishes to try it ourselves. . . . The embossed leather in which most of the work is done is an idea of my own. It is not cut, or raised by padding, but is quite solid leather, and is worked on the book after it is covered, with one small tool. It allows of great freedom of design, no two people work it alike.’”
—https://archive.org/details/bindingsmorrow00Guil/page/n89/mode/2up 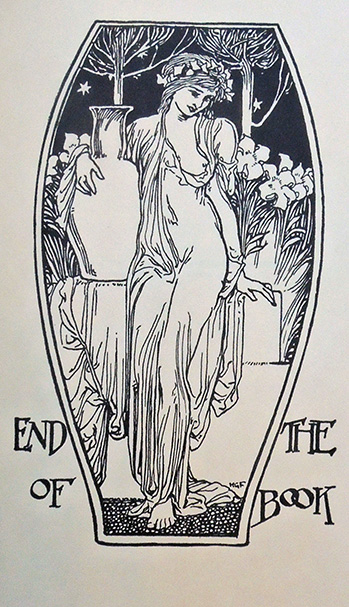 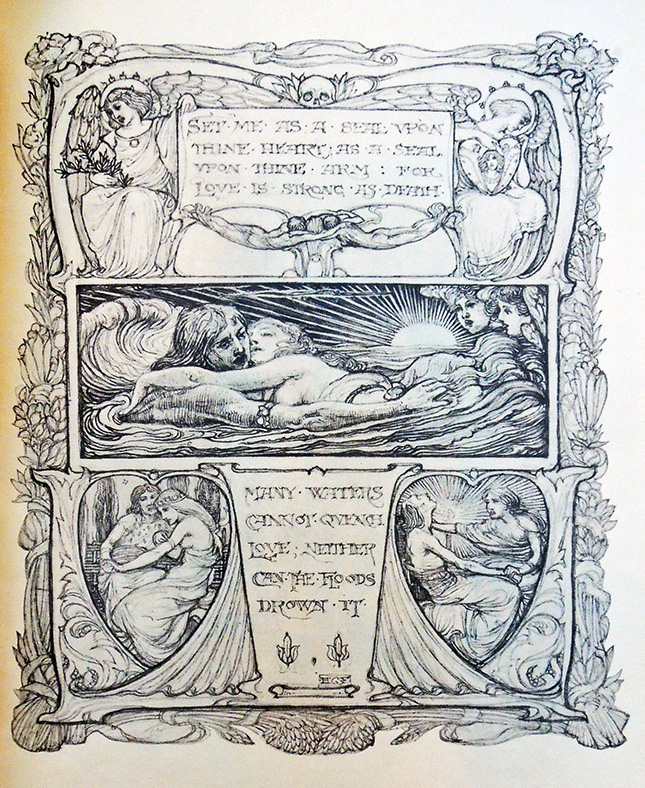 Thanks to Sarah Hovde, not only for the Folger Shakespeare Library post on MacDonald but the Wikipedia page she wrote to introduce MacDonald to the contemporary world. Read: https://collation.folger.edu/2017/03/guild-women-binders/

https://doi.org/10.1093/benz/9780199773787.article.B00062735
The Oxford Art Online describes Herbert Granville Fell as a painter first, then illustrator and stained glass painters. “Fell studied in London at Heatherley’s, in Brussels and in towns in Germany. He produced drawings for the Pall Mall Magazine, The Ludgate Monthly, The Windmill, the English Illustrated, the Ladies Field (of which he was artistic director) and other magazines.” The Song of Solomon is only one of many elaborately illustrated books by Fell. 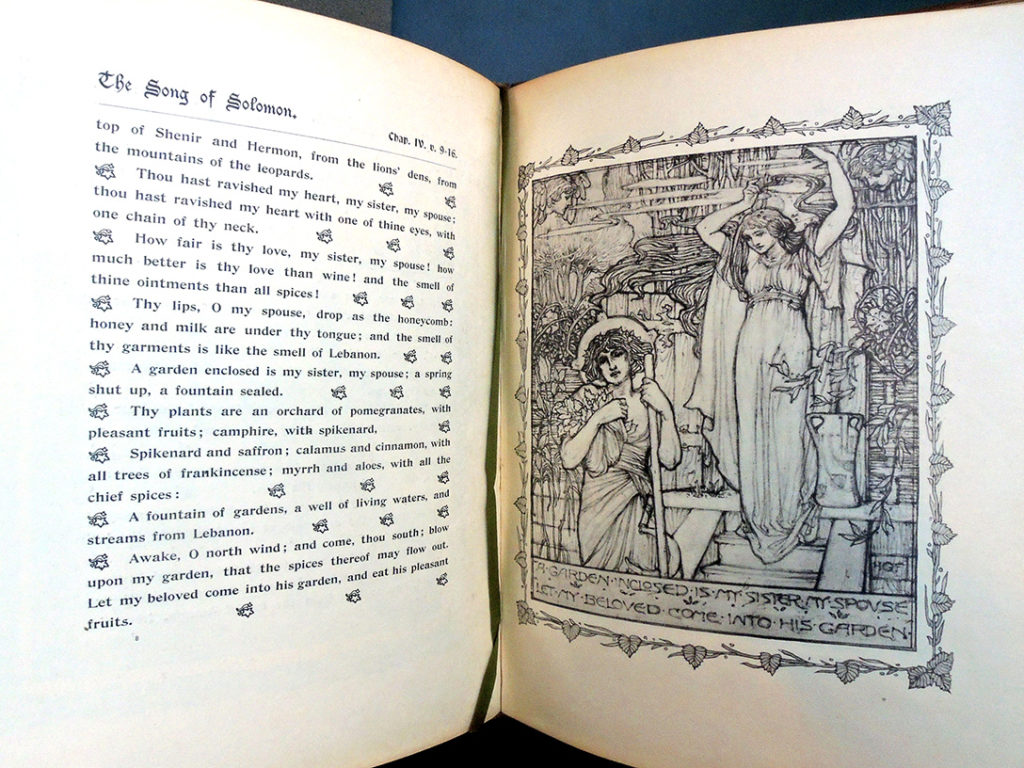 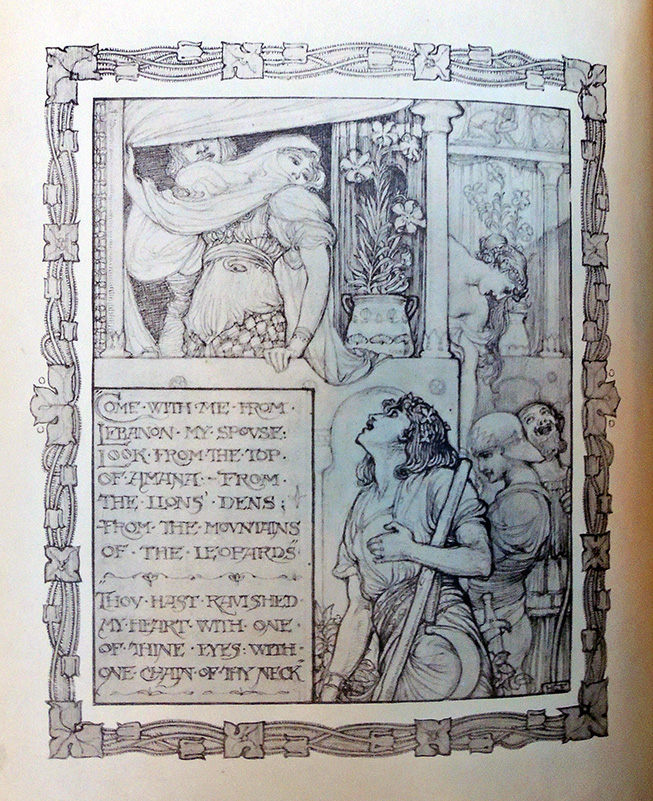 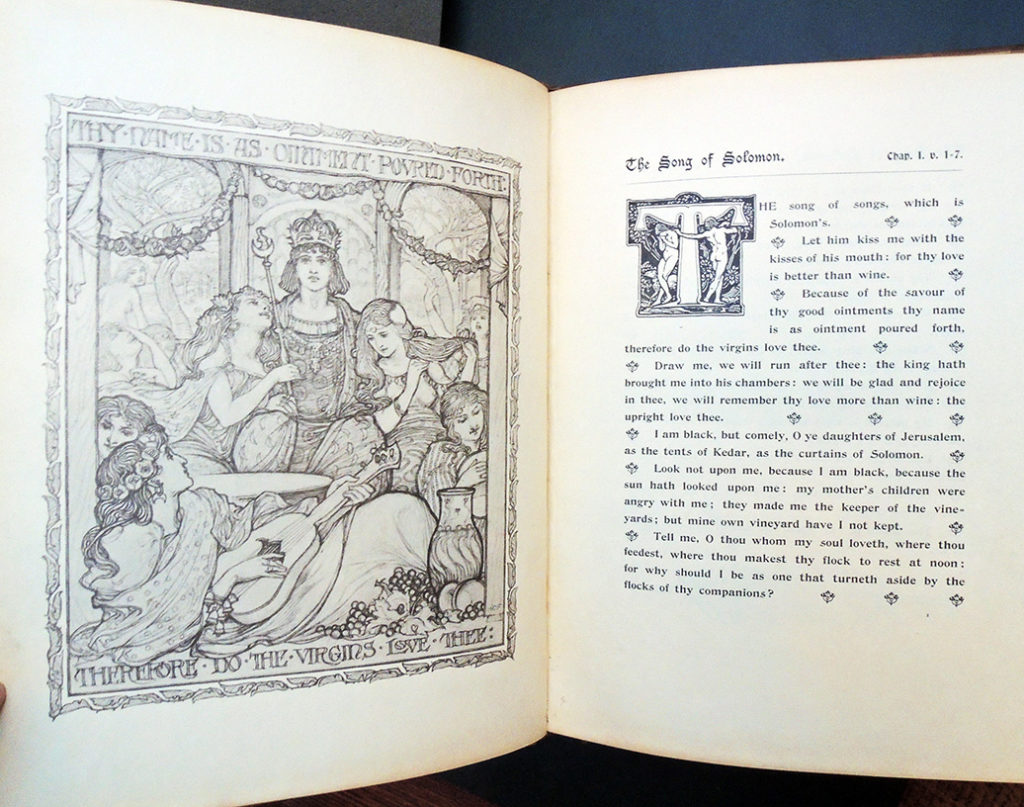 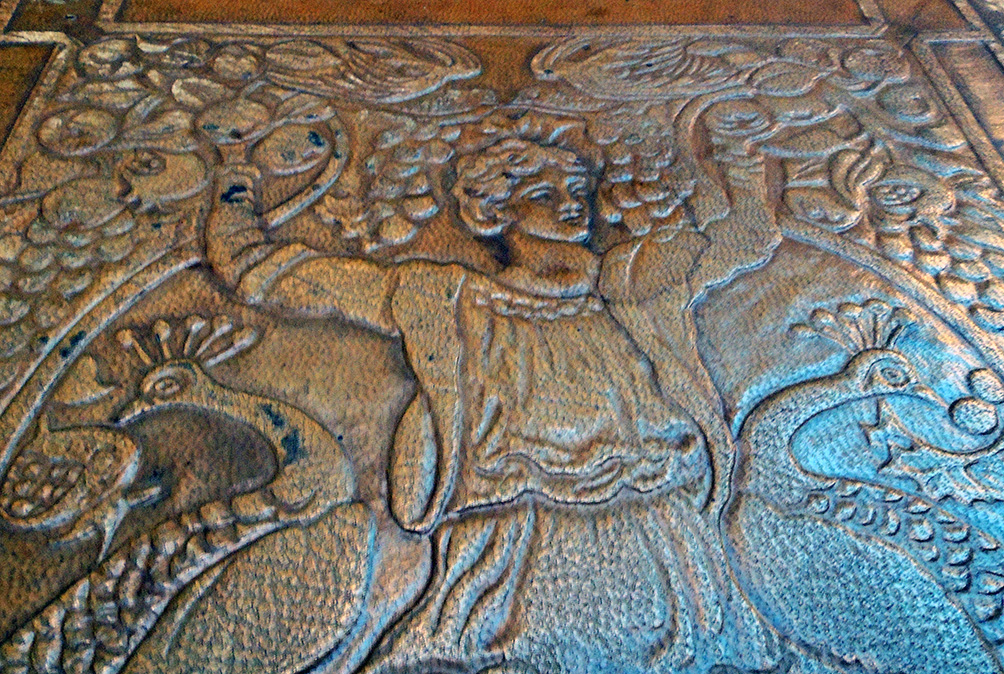