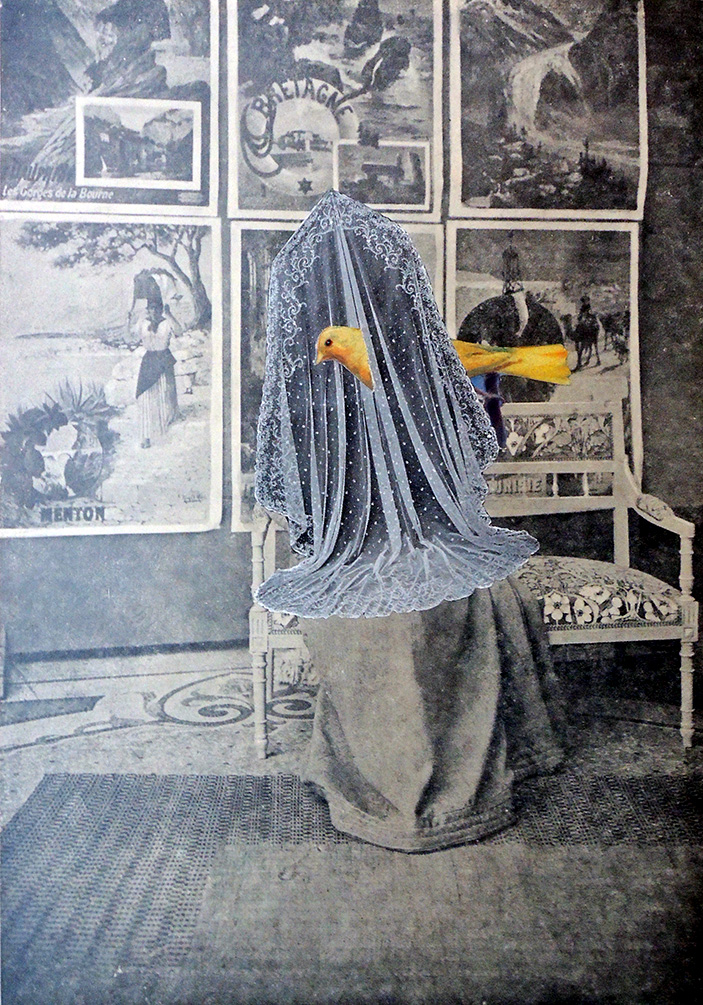 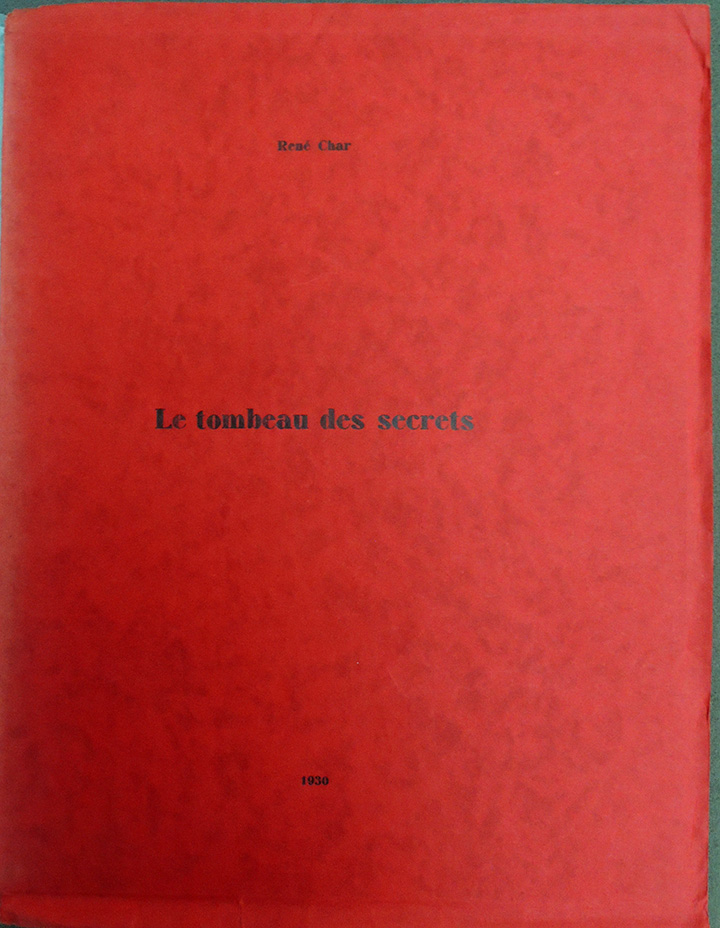 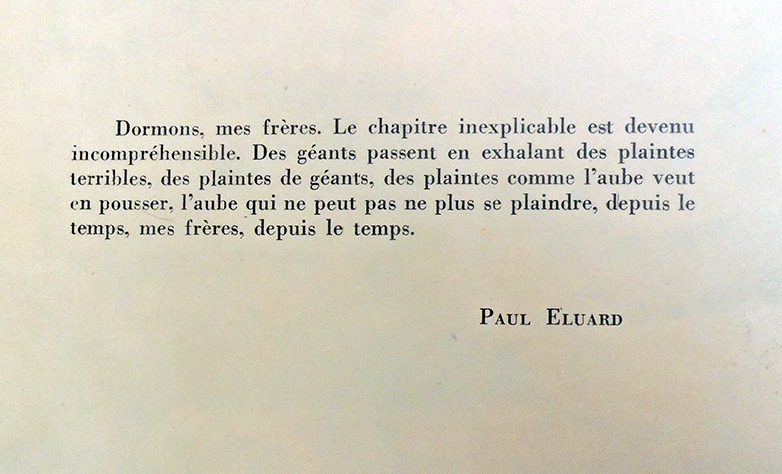 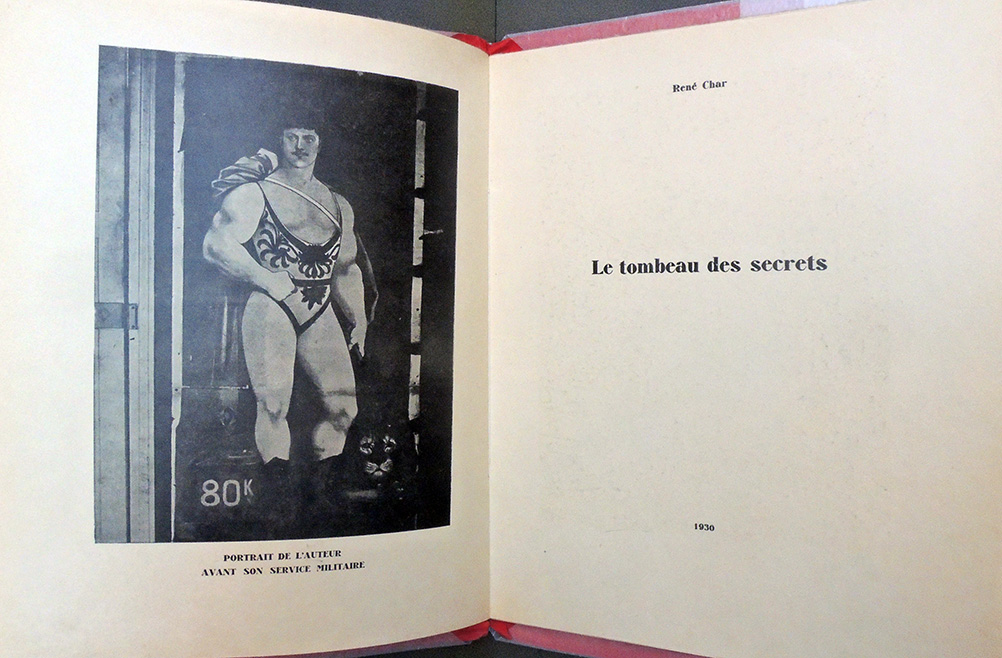 1929/1930 marked an important moment in the history of Surrealism and for the French poet René Char (1907-1988) in particular. Early in 1929 while still living in L’Isle sur la Sorgue, Char began writing and publishing, founding the journal Méridiens (complete in three issues Marquand PQ 1141 .M47).

In August 1929, he sent copies of his book Arsenal to Paul Éluard (1895-1952) in Paris, who responded immediately and came to visit him in the south of France. They formed a bond that became a lifelong friendship and in late November Char moved to Paris where Éluard introduced him to André Breton (1896-1966) and the other surrealists. 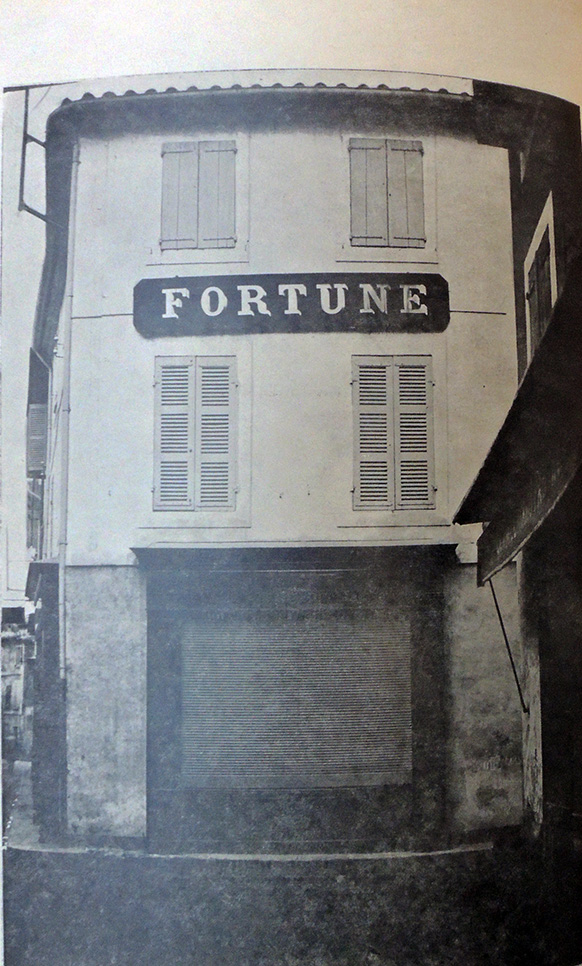 In the spring of 1930, Char, Breton, and Éluard went on a driving tour of Vaucluse in Southeastern France (located in the Provence-Alpes-Côte d’Azur region). It was on this trip the men collaborate on the small volume Ralentir Travaux (Slow Down Construction, Marquand PQ2603.R35 R313 1990), the title taken from a road sign. In addition, they played with photo-montage constructions using Char’s family photographs.

In April, Char published Le Tombeau des secrets (The Tomb of Secrets) and in each copy of the limited edition included an original collage [see ours at the top], using a photograph of Char’s godmother, Louise Roze but (on Char’s insistence), hiding her face in various ways. 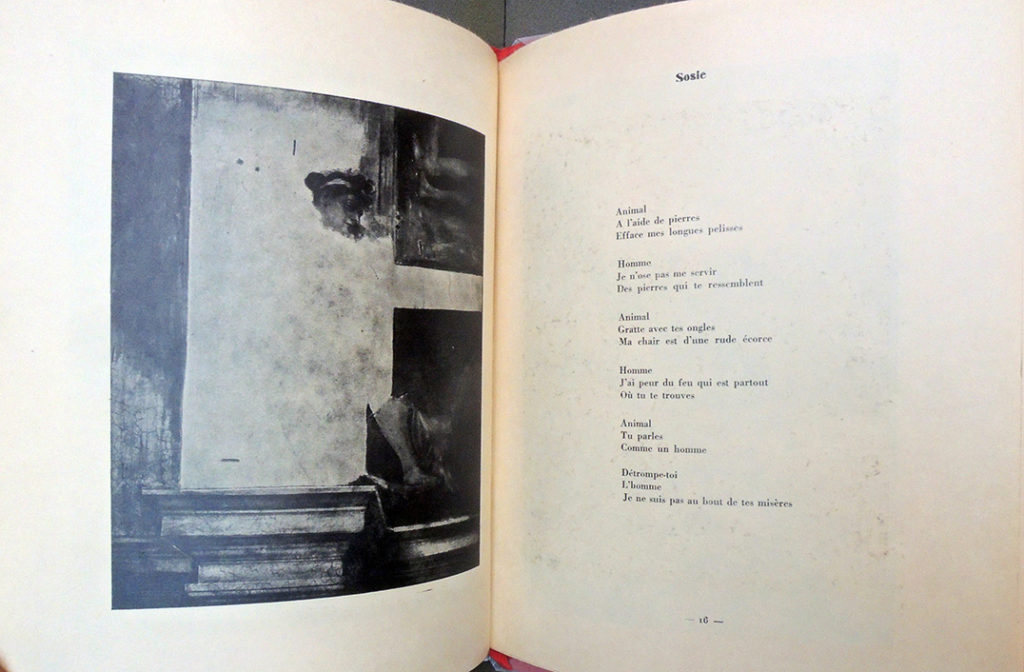 Because of this unique element and Char’s beautiful writing at this pivotal moment in 1930, Le Tombeau des secrets is a rare treasure, now for the first time acquired by the Graphic Arts Collection. This major acquisition was made with the assistance of colleagues in French Literature, Art and Archeology, and European History, for which we are extremely grateful. 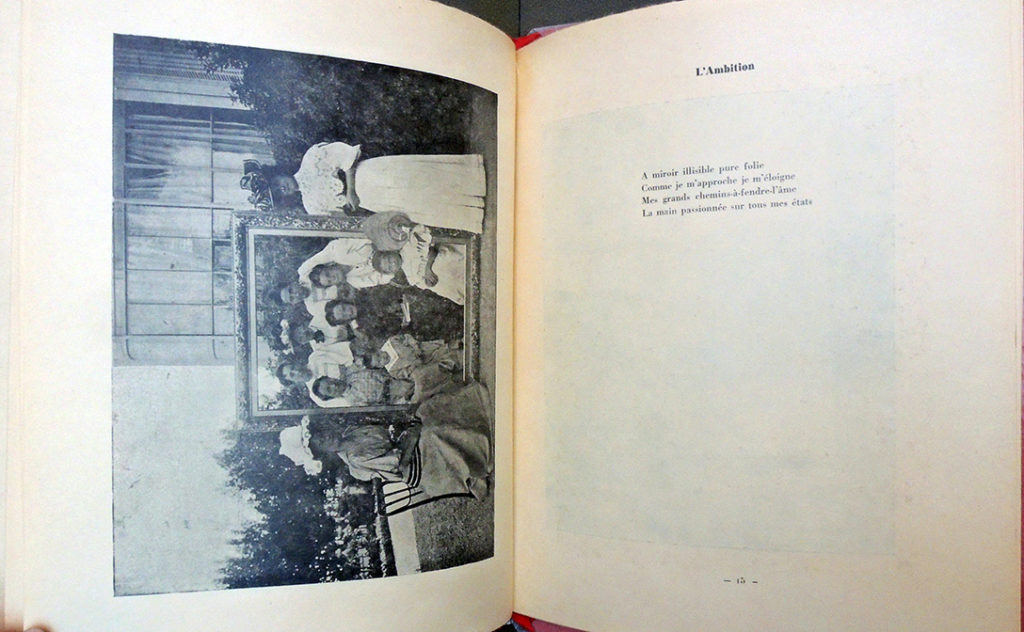 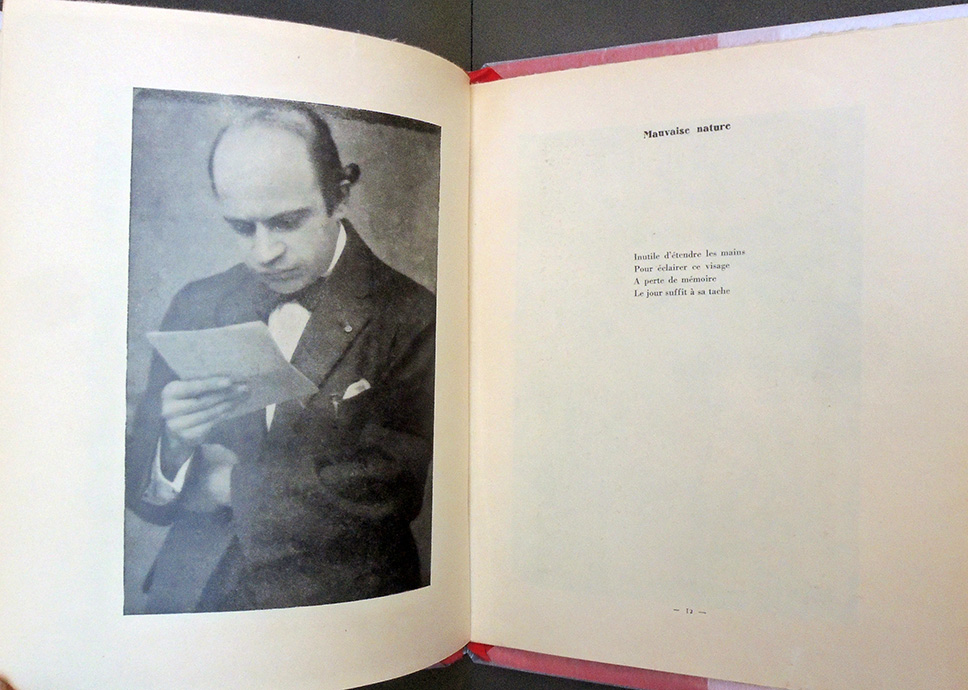 René Char (1907-1988), Le tombeau des secrets (The Tomb of Secrets) (Nîmes: Imprimerie A. Larguier, 1930). 12 photographic illustrations reproduced on full pages including the frontispiece. The last is an original collage with added hand color by Paul Éluard and André Breton hiding the face of Char’s godmother, Louise Roze. Our volume has a printed red cover with a modern case. It is copy no.10 of 10 on Japon Imperial paper, with a correction (probably by René Char) on page 11 [see below]. Graphic Arts Collection GAX 2020- in process

Le Tombeau des secrets had a single publication in 1930; as a separate volume of poems, this work is neglected by the critics, perhaps because six of the ten poems of this edition were revised for the 1934 edition of Le Marteau sans maitre in which they were included as a part of Arsenal. …The importance of Le Tombeau des secrets in Char’s poetic formation lies in the fact that, while Surrealism is further praised and explored, there is an indication that the unreal has no value unless it is firmly rooted in the concrete world of man. The quest for poetic truth is continued, but now for the first time Char recognizes that poetry must be joined to the cause of man.–Virginia A. La Charité, The Poetics and the Poetry of René Char (University of North Carolina Press, University of North Carolina at Chapel Hill for its Department of Romance Studies, 1968) 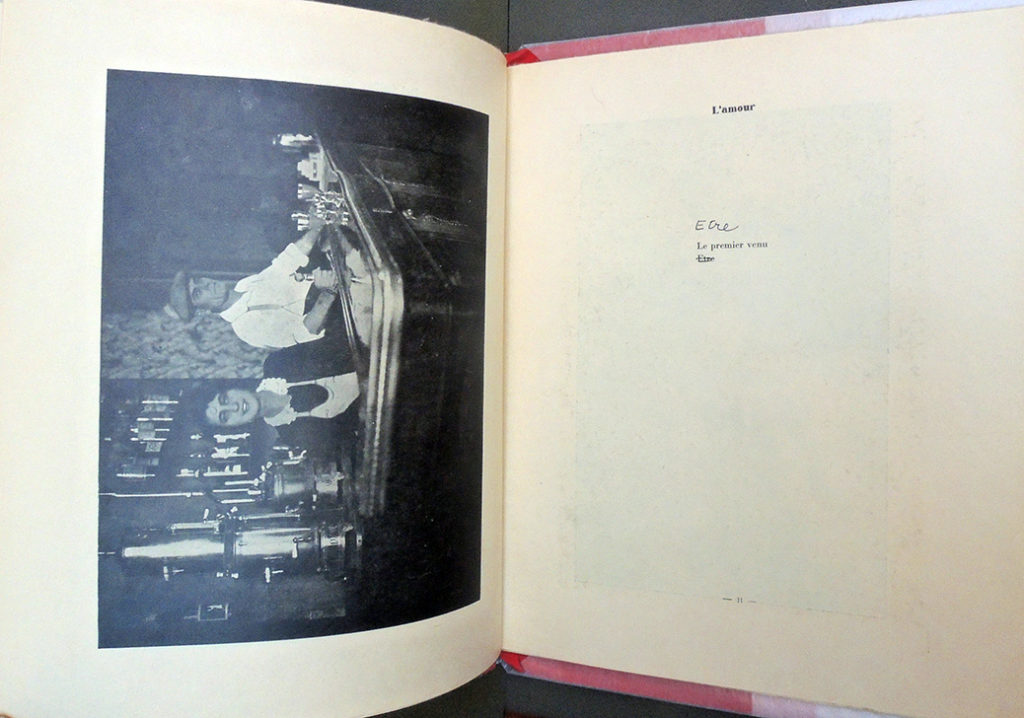 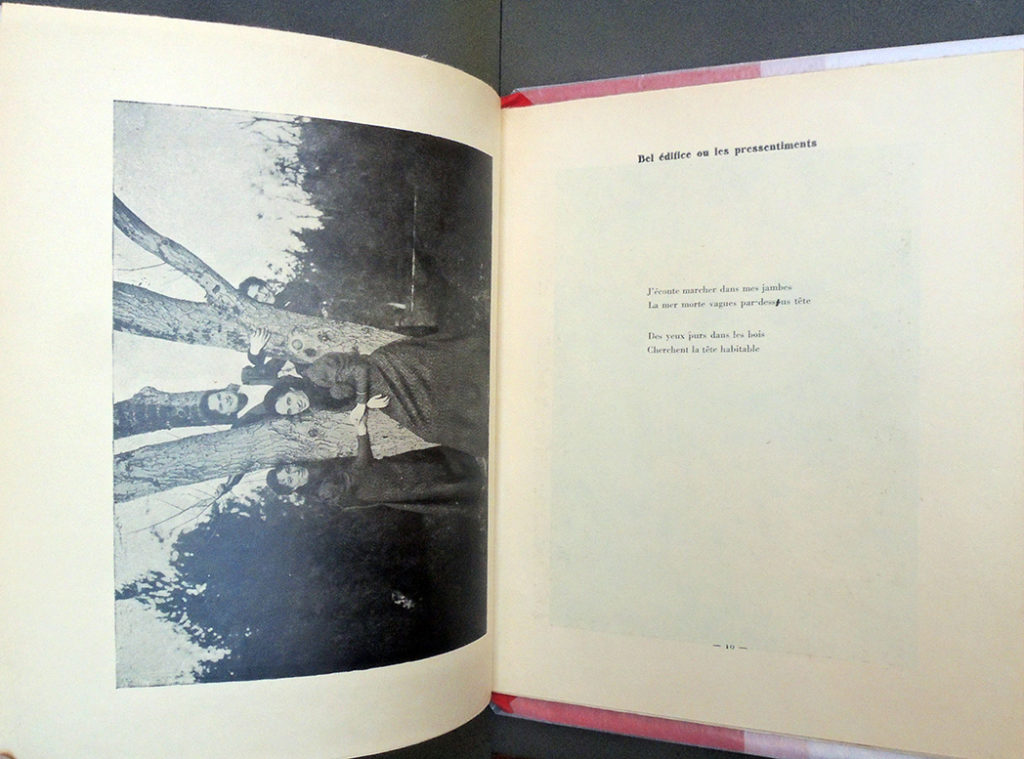 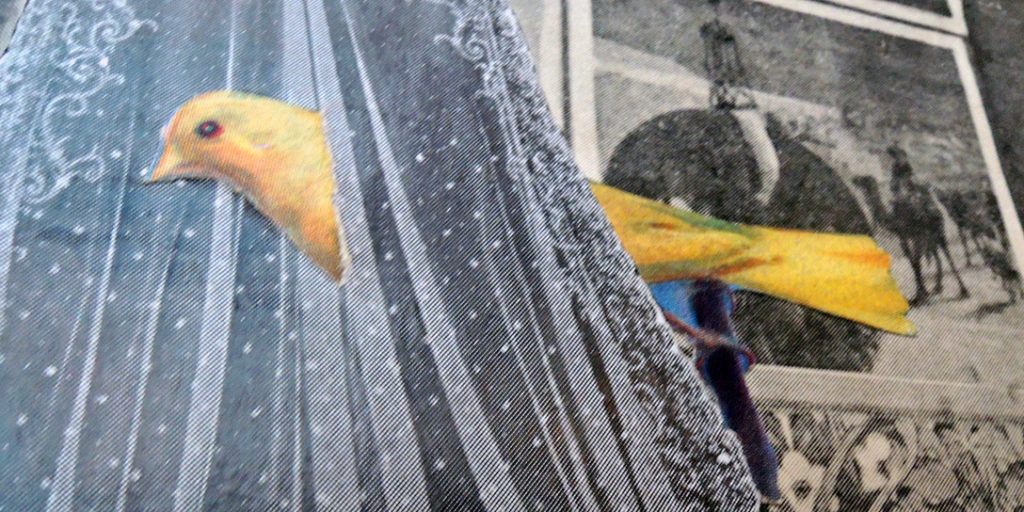 The decision to purchase this volume was made during “René Char: Poetry and War,” a colloquium at Princeton University February 27-28, 2015. It took a few years but we are now ready for the upcoming Char conference next February 2021 being organized by Prof. Bearman. 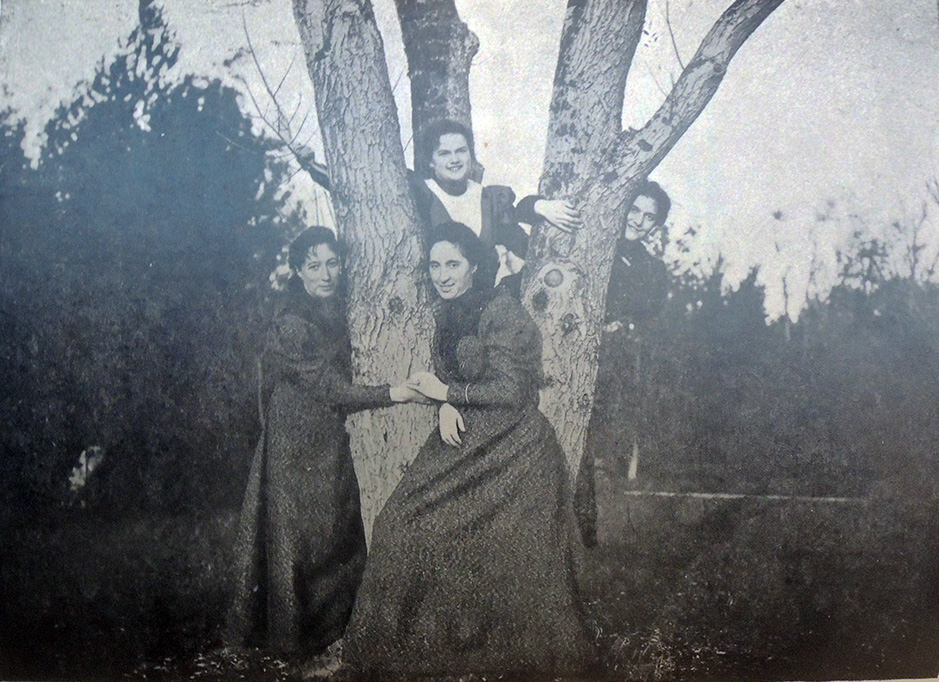