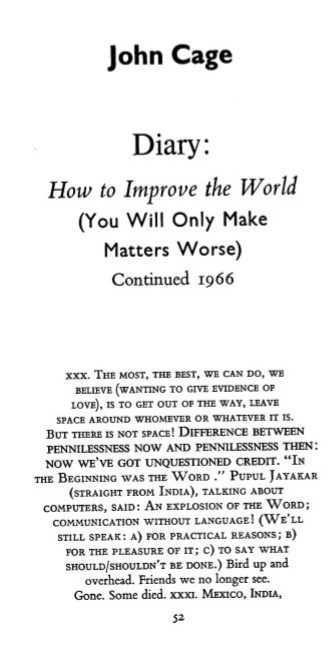 Five hours of John Cage reading from his Diary: How to Improve the World (You will Only Make Matters Worse) are posted at UbuWeb, Sound: http://www.ubu.com/sound/cage_diary.html. “Recorded June 22-24, 1991 at Powerplay Recording Studios, Maur, Switzerland. During the recording in the studio each change of typography in the printed text of the “Diary” corresponded to a change in the stereophonic position and a simultaneous change in the volume of John Cage’s voice.”

In 1990, John Cage (1912-1992) wrote an autobiographical statement that ran several pages in length. Here is a section that concerns his Diary:

“In the sixties the publication of both my music and my writings began. Whatever I do in the society is made available for use. An experience I had in Hawaii turned my attention to the work of Buckminster Fuller and the work of Marshall McLuhan. Above the tunnel that connects the southern part of Oahu with the northern there are crenellations at the top of the mountain range as on a medieval castle. When I asked about them, I was told they had been used for self protection while shooting poisoned arrows on the enemy below. Now both sides share the same utilities. Little more than a hundred years ago the island was a battlefield divided by a mountain range. Fuller’s world map shows that we live on a single island. Global Village (McLuhan), Spaceship Earth (Fuller). Make an equation between human needs and world resources (Fuller). I began my Diary: How to Improve the World: You Will Only Make Matters Worse. Mother said, “How dare you!

I don’t know when it began. But at Edwin Denby’s loft on 21st Street, not at the time but about the place, I wrote my first mesostic. It was a regular paragraph with the letters of his name capitalized. Since then I have written them as poems, the capitals going down the middle, to celebrate whatever, to support whatever, to fulfill requests, to initiate my thinking or my nonthinking (Themes and Variations is the first of a series of mesostic works: to find a way of writing that, though coming from ideas, is not about them but produces them). I have found a variety of ways of writing mesostics: Writings through a source: Rengas (a mix of a plurality of source mesostics), autokus, mesostics limited to the words of the mesostic itself, and “globally,” letting the words come from here and there through chance operations in a source text.” 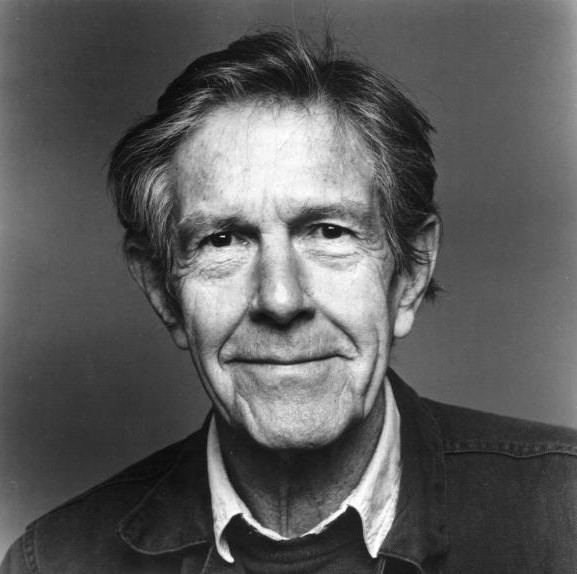 The first installment of his Diary appeared in Clark Coolidge’s magazine Joglars 1, no. 3 (1966) p. 61-68 (Online and RCPXR-8000253) and reprinted in Aspen magazine the following year. The second installment was published in the Paris Review 11, issue 40 (Winter/Spring 1967): 52-68 (online and recap AP4 .P375). All were printed with black type on white paper using only one font regular, bold, and italic. When the text appear in its own publication in the Great Bear Pamphlet series Cage added additional fonts and colors. These three were republished in A Year from Monday (1967) as installment four and so on, through nine differing installments. Here are pdf files of three versions: cage5, cage2, cage 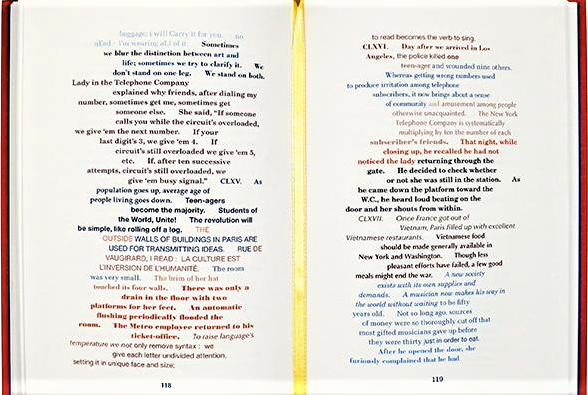 The most recent installment from Siglio Press in 2019 is an expanded paperback edition reproducing the 2015 hardcover edition of Parts I-VIII along with previously unpublished material from Cage’s incomplete Part IX. Holland Cotter reviewed the new edition for the New York Times stating, “Over sixteen years, beginning in 1965, John Cage compiled anecdotes, observations and koanlike tales, originally typing everything on an IBM Selectric and using chance methods to determine the formatting of texts that twist down each page. The Siglio [hardcover] edition preserves the graphic effects, but, more important, it gives a sense of the company he kept during these years—Marcel Duchamp, R. Buckminster Fuiller, D.T. Suzuki—and of his passionate feeling about a world locked in a state of perpetual warfare. Cage has a reputation for being a Zen-inspired wit. He was also much more, an intensely engaged moral thinker.”