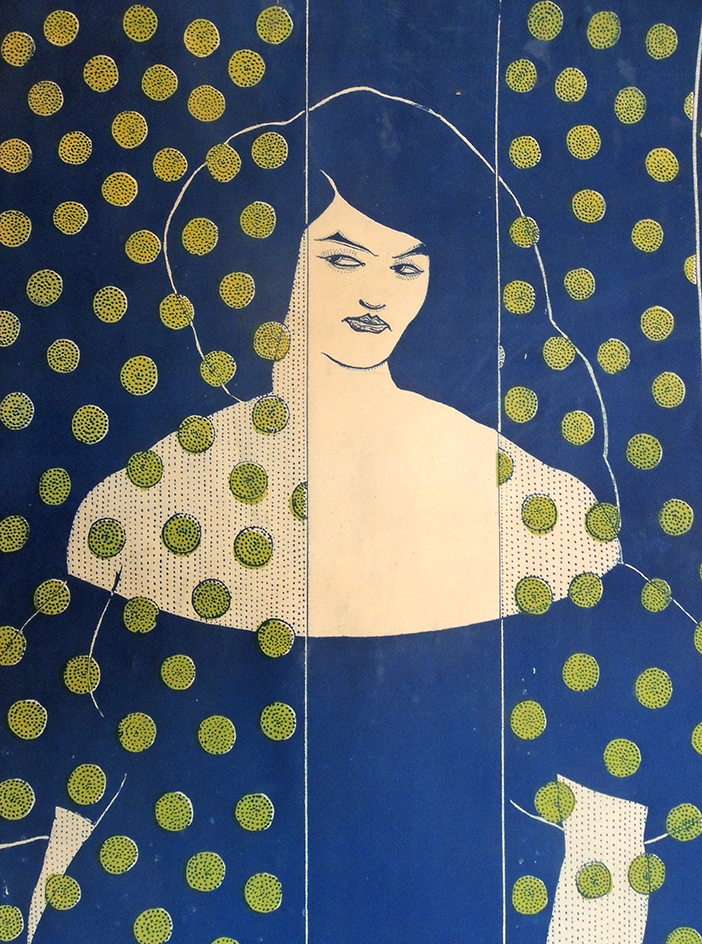 Thanks to the Friends of the Princeton University Library, the Graphic Arts Collection has a new lithographic poster by Aubrey Beardsley, purchased in memory of Ben Primer (1949-2019).

[William Butler] Yeats and {George Bernard] Shaw had a mutual friend in Florence Farr (1860–1917), who had created Blanche in Widowers’ Houses. She became manageress of the Avenue Theatre in 1894, and set out with a group of others to flout convention with the production of avant-garde plays. Their season opened with Dr. John Todhunter’s The Comedy of Sighs and Yeats’s The Land of Heart’s Desire in a double bill, but Todhunter’s play was a failure and was replaced by Arms and the Man, with Florence Farr as Louka….– W. B. Yeats, Autobiographies (London: Macmillan, 1955) pp. 281–4.

The poster (and program) announcing these two plays was design by the hot young illustrator Aubrey Beardsley, who Farr wisely commissioned to handle her advertising. It was his first and still, best known poster with a rare use of color. As soon as it was posted around town, all of London society began talking. 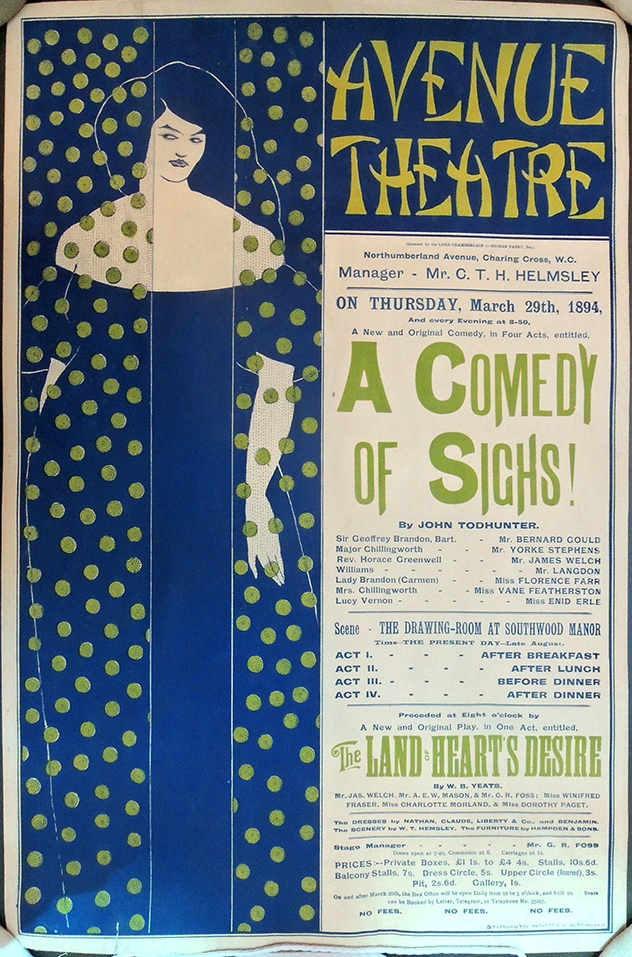 Already recognized for his infamous illustrations of Le Morte D’Arthur and Salomé (images first published in Pall Mall Budget magazine), Beardsley was seen as a controversial but hugely fashionable new artist. He associated with the British Decadents, inspired by the American expatriate James McNeill Whistler, along with the notorious Oscar Wilde.

The poster opened a Pandora’s box on the Decadents’ use of eroticism and sexual ambiguity in their imagery. Charles Hiatt described its initial reception “nothing so compelling, so irresistible, had ever been posted on the hoardings of the metropolis [of London] before. Some gazed at it with awe, as if it were the final achievement of modern art; others jeered at it as a palpable piece of buffoonery; everybody, …was forced to stop and look at it.” —Le livre, revue du Monde Littéraire 5 (November 1884): 356.

The Japanese influence in the title calligraphy and flatness of the overall design led to questions of racial blending, while the dot pattern over the female’s face and body were read as a suggestion of syphilis and sexual promiscuity. To research the topic further, see the soon to be released Picture World: Image, Aesthetics, and Victorian New Media by Rachel Teukolsky (Oxford University Press, 2020), selections already available on google books. 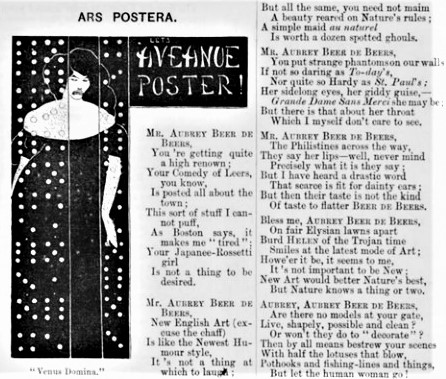 Here is one of several humorous pieces published in Punch, this one April 21, 1894. The magazine told the theater’s manager (in Cockney slang) to “ave a new poster,” obviously a pun on the word Avenue.