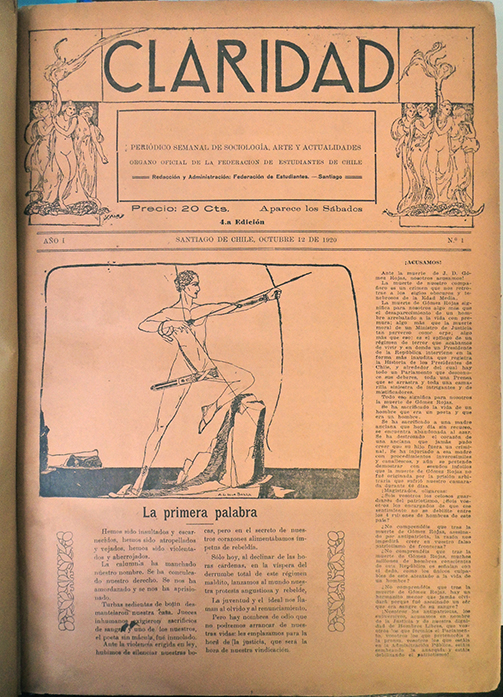 In a joint acquisition between Latin American, Iberian, and Latino Studies and the Graphic Arts Collection, Princeton University Library recently acquired the first 98 issues (out of 140) of Claridad, a periodical published by the Federación de Estudiantes de Chile from 1920 to 1932. A key publication of anarchist and other radical inclinations, Claridad includes contributions by labor leaders, social activists, artists, and writers (including many by Pablo Neruda) of the period. HTML text can be downloaded here,  https://claridad.uchile.cl/index.php/CLR/issue/archive, but no US library holds the graphic paper copies except Princeton. 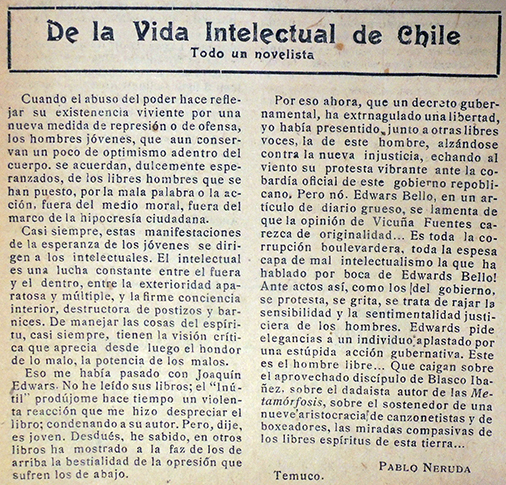 The National Library of Chile posted a long description, quoted here in part and roughly translated into English:

Claridad magazine was the organ of the Chilean Student Federation and the medium of the so-called “generation of twenties”, founded by Alberto Rojas Jiménez (1900-1934), Raúl Silva Castro (1903-1970) and the Ecuadorian Rafael Yépez, in October 1920. Defined as a “doctrinal, combat and barricade” magazine, it was a wide space for the exchange of ideas from different ideological currents, although with more proximity to anarchist thought (Ossandón, Carlos and Santa Cruz, Eduardo. The outbreak of forms: Chile at the dawn of “mass culture.” [Online HathiTrust Emergency Temporary Access, PN5047.P4 O87 2005]). 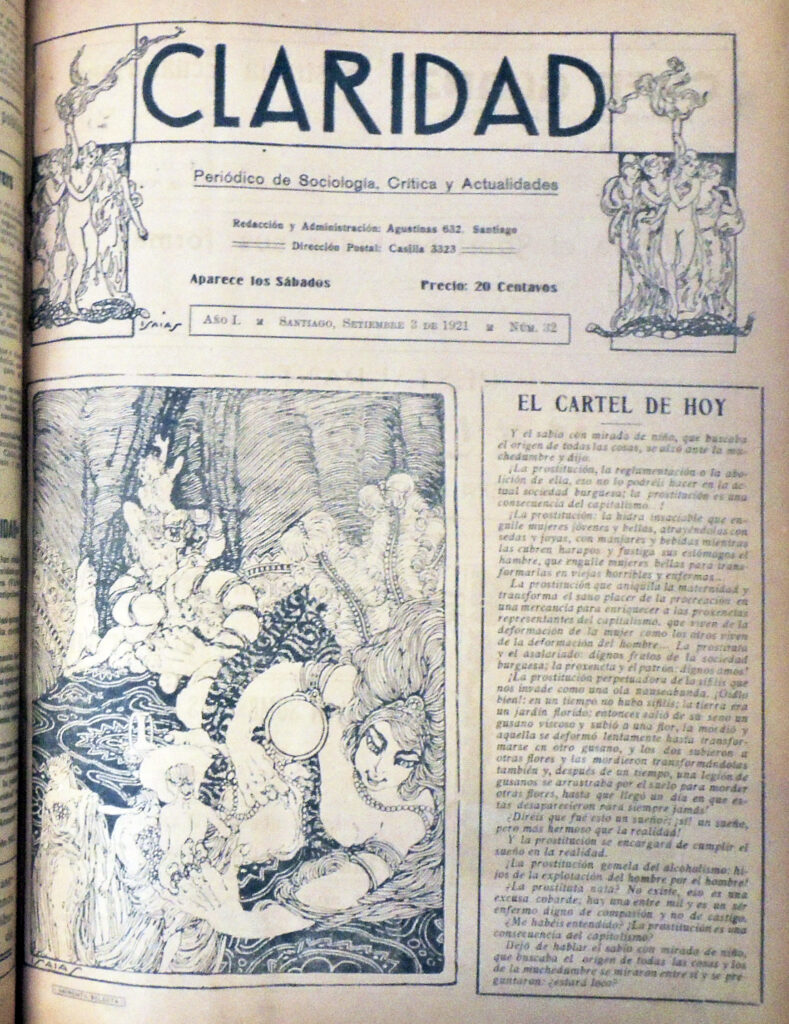 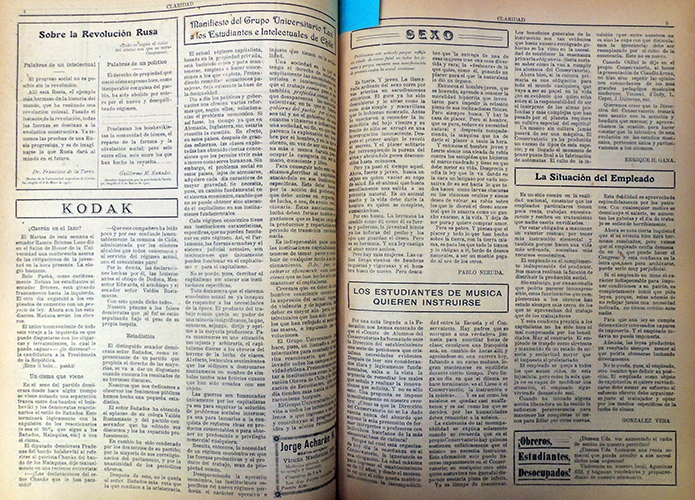 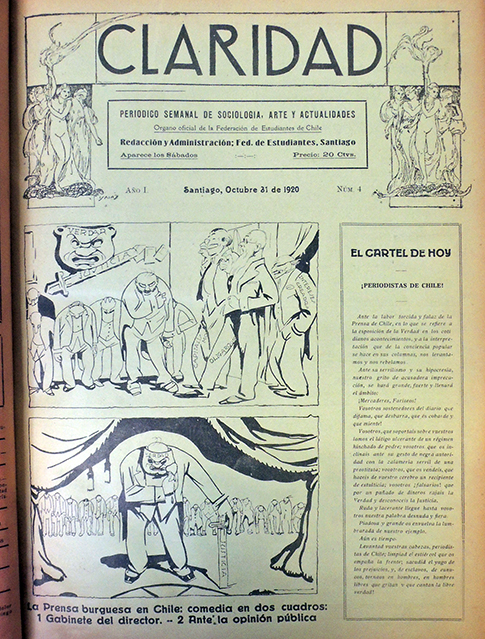 …At the time of Claridad‘s appearance, the Student Federation was influenced by ideological currents such as Americanism, internationalism, anti-militarism and pacifism, which were reflected in the magazine and remained as axes of the medium until 1932. The magazine emerged at a time when, in different parts of the world, intellectuals echoed the call of the French group Clarté to establish an “international network of thought”, with a pacifist and anti-militarist tendency.

The Claridad group took up this call, which led to the publication of the publication in the midst of a national climate of political tension. The students of the Federation were in the process of criticizing the government of Juan Luis Sanfuentes (1858-1930) for the political persecution to which they were subjected. Such persecution took place after a group of protesters stormed the association’s headquarters, arguing that the federated students were unpatriotic for not supporting the government’s decision to mobilize military troops to the north of the country, in the context of the prolonged border conflict between Chile and Peru.

…In Claridad a heterogeneous group of Chilean and foreign intellectuals and labor leaders converged, as well as writers and artists, among whom stood out such figures as Gabriela Mistral (1889-1957), Luis Vargas Rosas, Tótila Albert (1892-1967), Manuel Rojas (1896 -1973) and Isaías Cabezón (1891-1963). In this sense, the magazine expressed interest in the renewal movements in the field of art and literature, which was one of its main axes during its first year of publication. 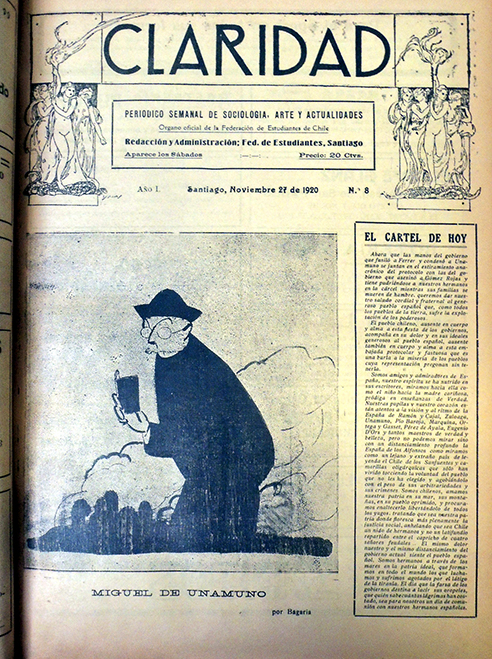 …In 1926, Claridad stopped being published due to the restriction suffered by anarchist publications during the dictatorship of Carlos Ibáñez del Campo (1877-1960). In its reappearance, between August 1931 and January 1932, it continued to be influenced by anarchist and pacifist ideas, but with a new axis that crossed the five issues of this second period: criticism of the military government of Ibáñez. Despite the intentions of continuity that were manifested in issue 140, the magazine abruptly ceased publication, dedicating this issue to one of its main editors and who for many issues was in charge of the section “Today’s poster” that was published on the cover of the magazine, Juan Gandulfo Guerra (1895-1931), who died in December 1931. 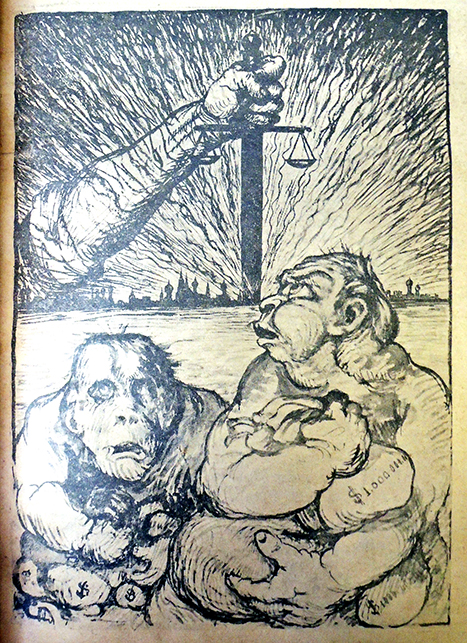 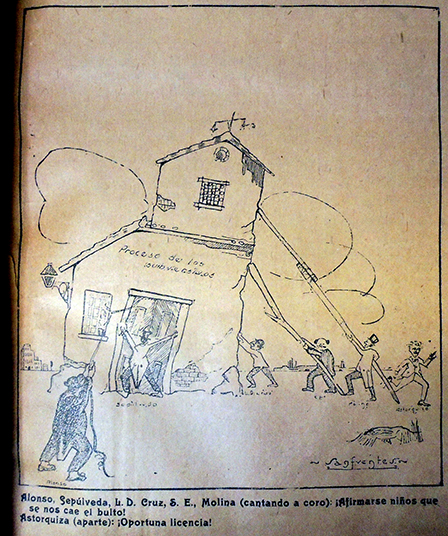 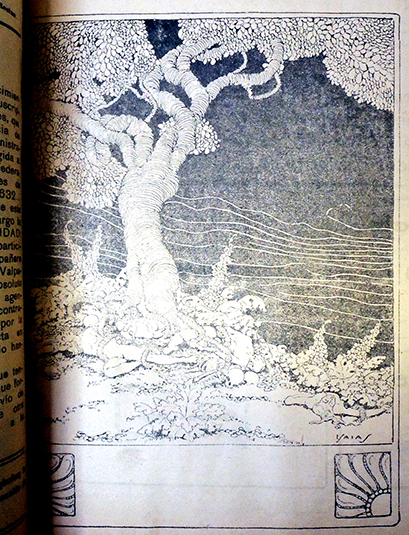 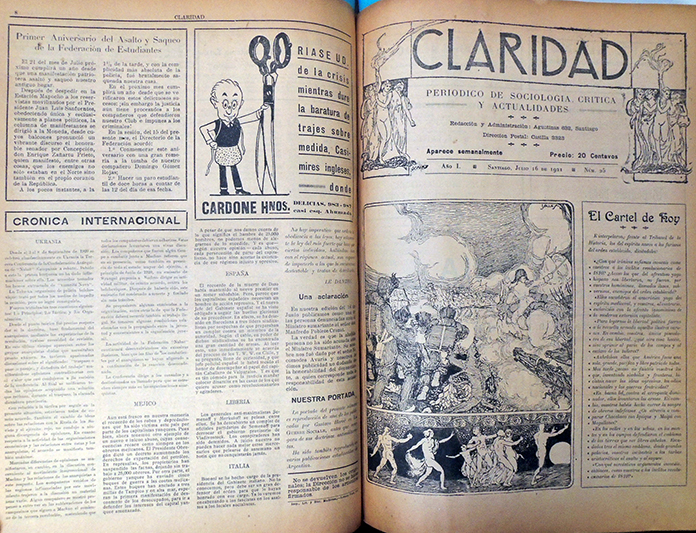 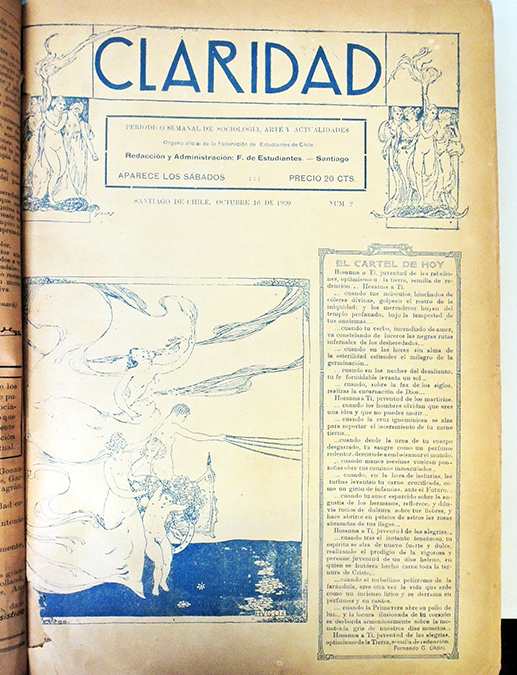