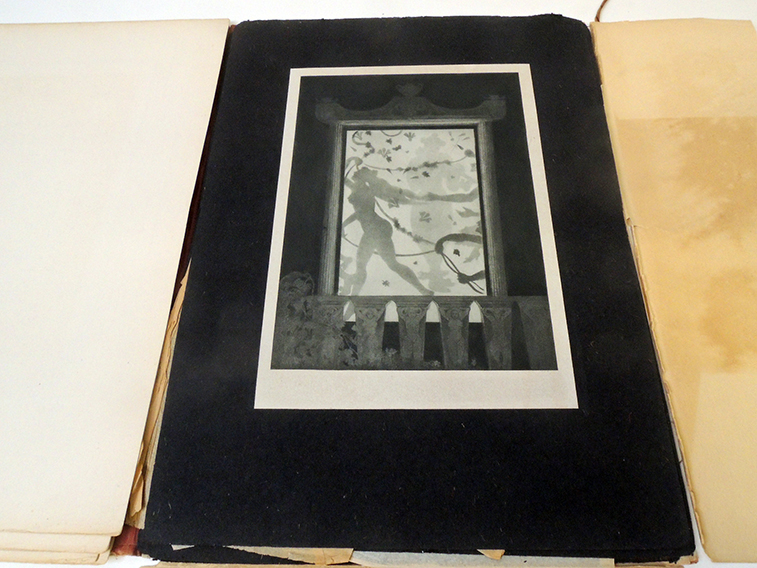 Oscar Wilde (1854-1900), The Harlot’s House: a Poem; with five illustrations by Althea Gyles. Deluxe issue, one of fifty copies “With the illustrations in duplicate, the further set being proofs on India paper mounted, with black marginal borders, and the text printed on Japanese vellum with the plates in Folio. Original cloth portfolio (London: Imprinted for subscribers at the Mathurin Press, MCMIII. [1904]). Graphic Arts Collection GAX 2021- in process 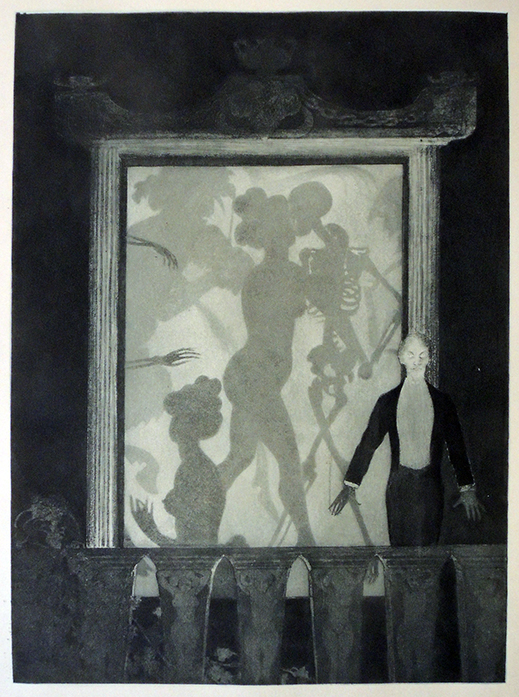 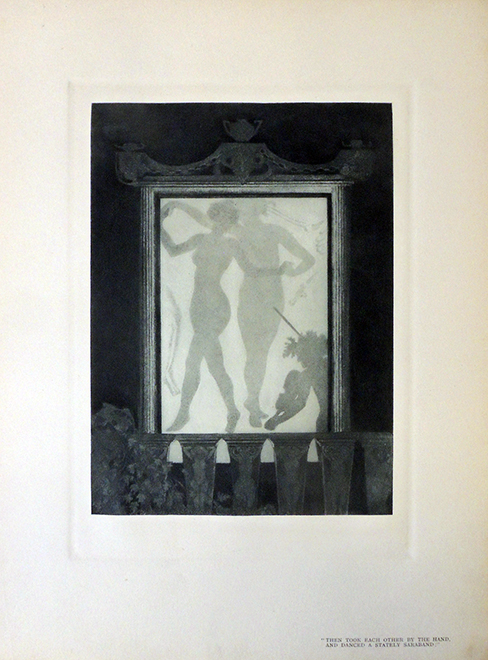 In Paris early in May 1899 Gyles agreed to illustrate Wilde’s The Harlot’s House for the publisher, pornographer, and patron of Aubrey Beardsley, Leonard Smithers (1861–1907). Soon they were caught up in an ostentatious affair. She executed five coloured drawings which Smithers described as ‘weirdly powerful and beautiful’ and eventually published in the pirate edition in 1904 (Sherard, 342). At the height of her energies, postponing all other work to finish the illustrations for The Harlot’s House, she was plainly in love with ‘so excellent a person as Mr Smithers’ (Finneran and others, 56). Martin Secker would often see them playing chess in the domino room at the Café Royal. The gold-stamped covers for Ernest Dowson’s Decorations followed in December 1899, using a stylized rose, which Yeats identified as her ‘central symbol’, on the white parchment top board, and a pattern of thorns and foliage on the back. Four swirling birds pecking at a heart between a sun and moon surrounded by stars form the top board of John White-Rodyng’s The Night (1900). 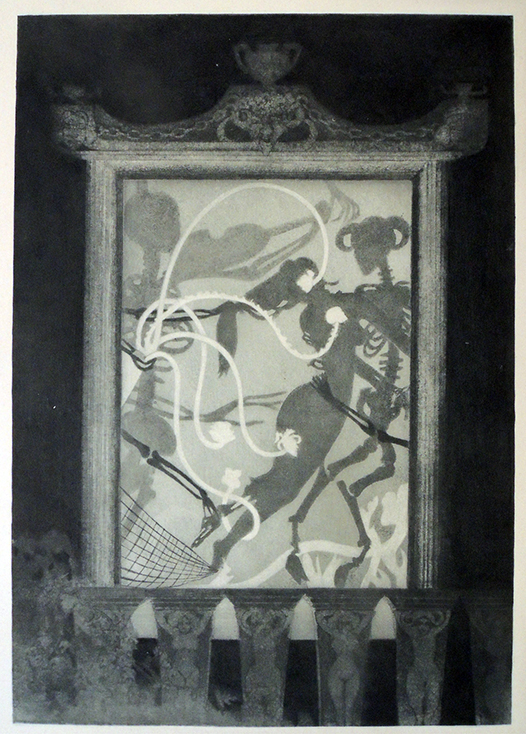 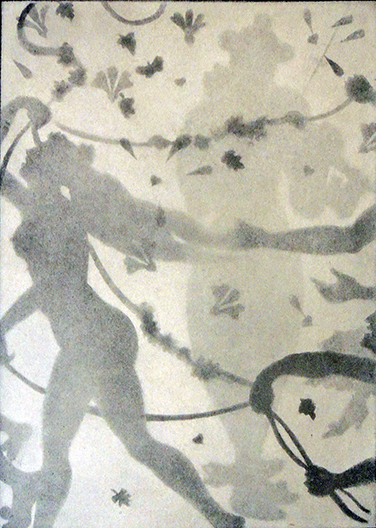 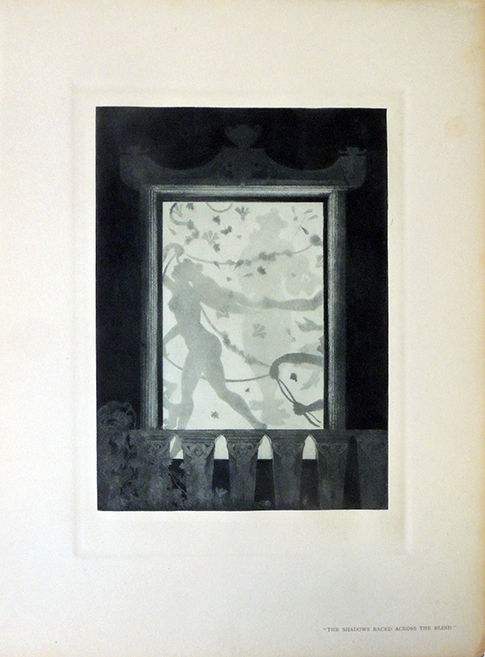 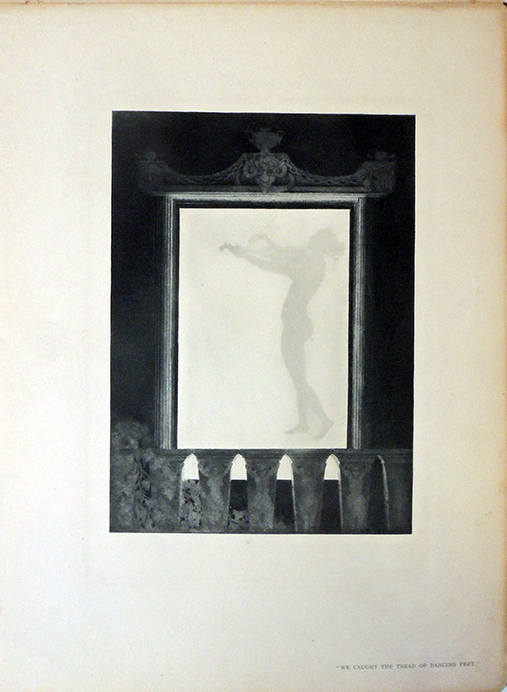 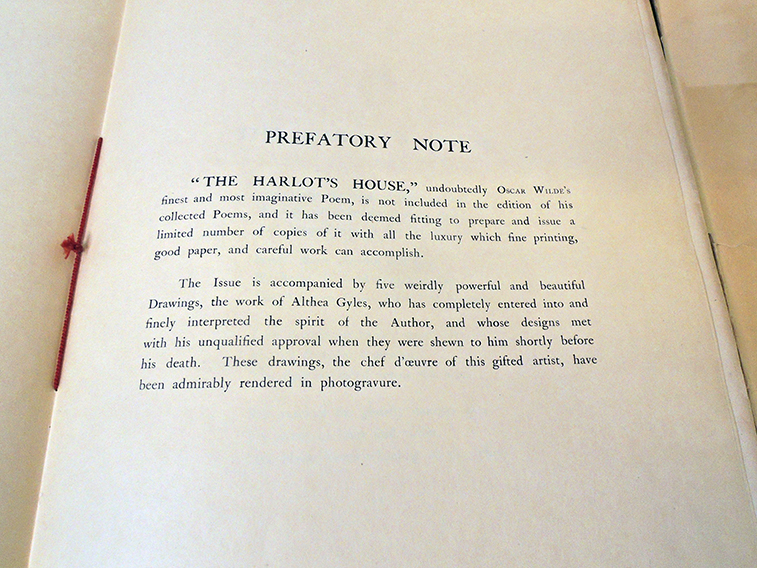 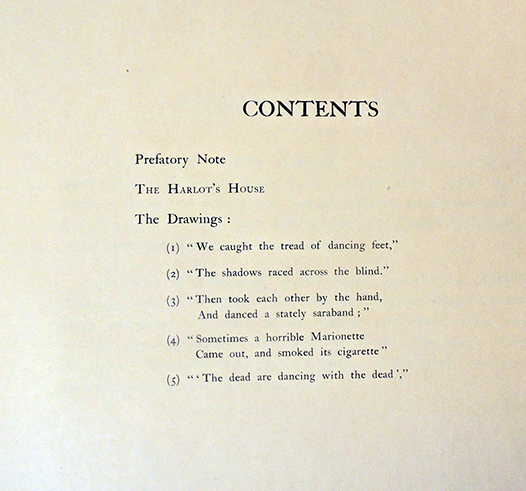 “Miss Althea Gyles’ five beautiful and bizzare illustrations to, or rather interpretations of, Wilde’s beautiful and bizarre poem make this edition of it a notable contribution to Wilde literature, and one which collectors of his strange haunted work will greatly value. “The Harlot’s House” was one of the earliest, in fact I think the actual first, of Wilde’s poems to find its way into print, and Wilde used laughingly to tell an amusing story about its original publication. Wilde was quite a young man when it was first printed in an English weekly called The Sporting and Dramatic News, and, as with all young writers, “Oscar’s” first published poem was something of an event in the family. Hearing indefinitely that he had achieved the dignity of appearing in print, a certain distinguished and pious old lady relative of his had congratulated him. “I hear, Oscar,” she had said, “that you have had a poem published.” And then, much to Wilde’s embarrassment, she had continued, “And what is the subject of the poem?” How Wilde evaded the dilemma I forget, but I remember that even his superb presence of mind was sorely taxed to avoid shocking the good old lady with a title hardly suggestive of the innocent first fruits of a boyish muse.”–J. Fuchs, review The Harlot’s House in The International 1910 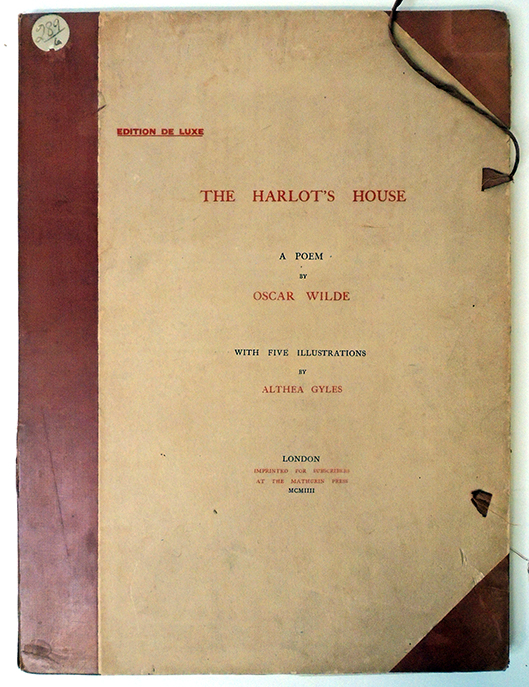 We caught the tread of dancing feet,
We loitered down the moonlit street,
And stopped beneath the harlot’s house.

Inside, above the din and fray,
We heard the loud musicians play
The ‘Treues Liebes Herz’ of Strauss.

Like strange mechanical grotesques,
Making fantastic arabesques,
The shadows raced across the blind.

We watched the ghostly dancers spin
To sound of horn and violin,
Like black leaves wheeling in the wind.

Then took each other by the hand,
And danced a stately saraband;
Their laughter echoed thin and shrill.

Sometimes a clockwork puppet pressed
A phantom lover to her breast,
Sometimes they seemed to try to sing.

Sometimes a horrible marionette
Came out, and smoked its cigarette
Upon the steps like a live thing.

But she–she heard the violin,
And left my side, and entered in:
Love passed into the house of lust.

Then suddenly the tune went false,
The dancers wearied of the waltz,
The shadows ceased to wheel and whirl.

And down the long and silent street,
The dawn, with silver-sandalled feet,
Crept like a frightened girl.

“The Harlot’s House,” published in April 1885 in the Dramatic Review.