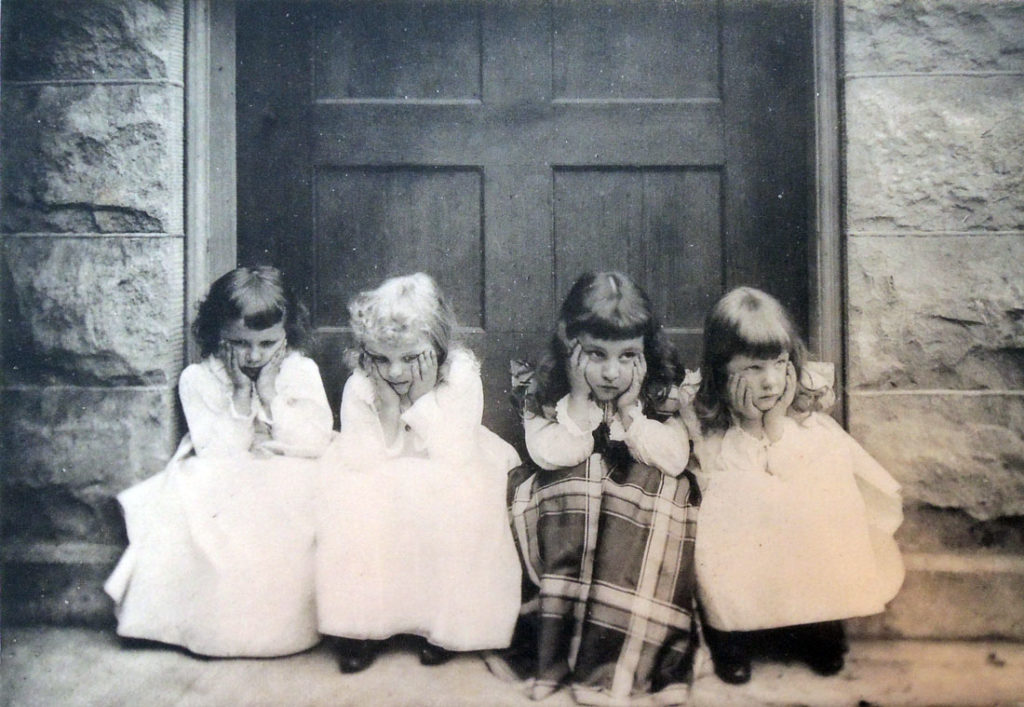 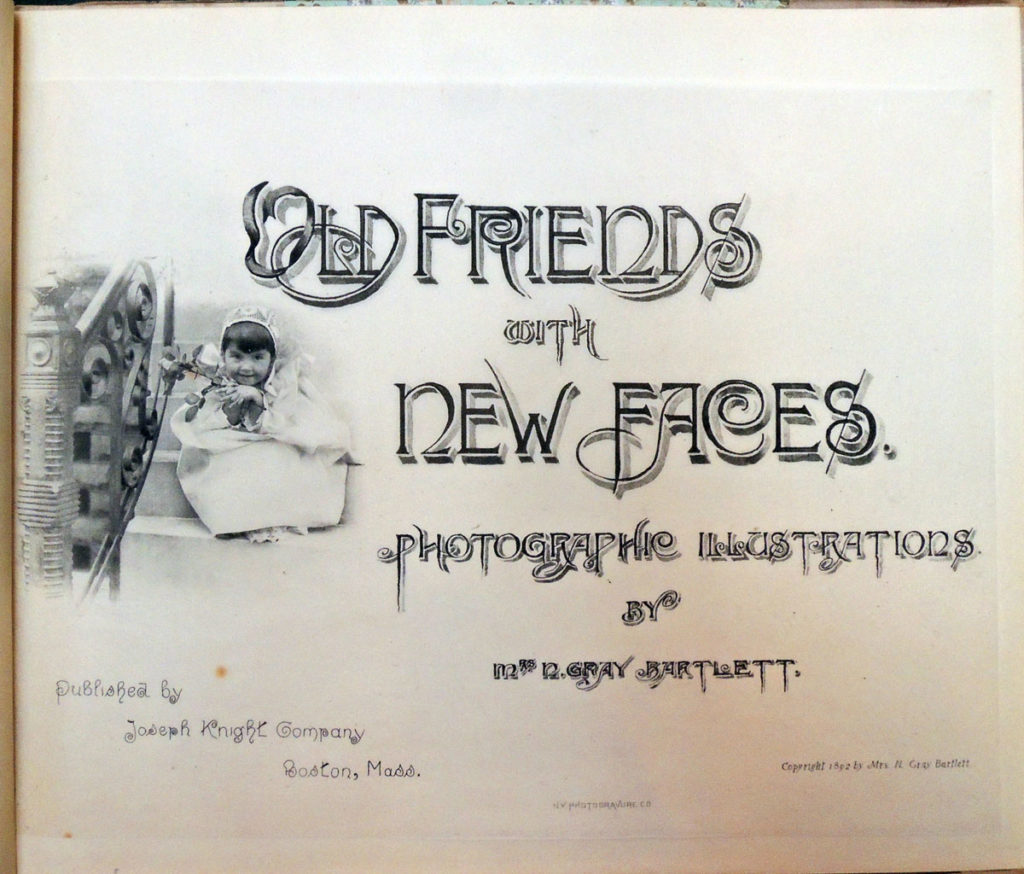 Between 1888 and 1896, the Boston-based publisher Joseph Knight (1829-1907) partnered with Ernest Edwards (1837-1903), president of the New York Photogravure Company, to publish a series of small gift books illustrated with photogravures. Most were produced in editions of 500 with similar printed paper covers and horizontal formats, selling for around $2.00. 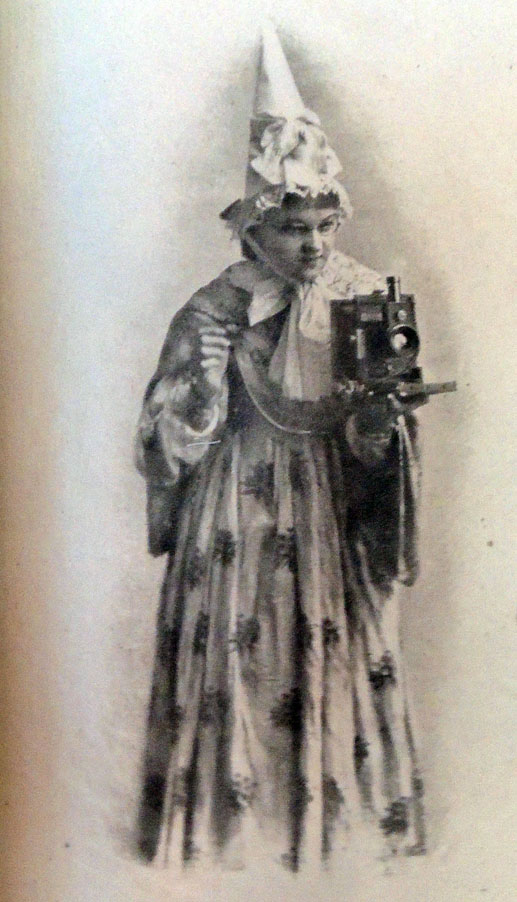 Chicago photographer Mary Ann (Mrs. N. Gray) Bartlett (1846-1913) made three books with Knight, the first in 1892 entitled Old Friends with New Faces. “The most original and genuinely pictorial product of photography we have seen for a long time,” wrote Edward Wilson. “It is a handsomely arranged series of photogravures of children grouped to illustrate Old Friends, the stories of Mother Goose. The New Faces are evidently good friends of the admirable artist, who so deftly caught them here and there in the garden and by the stairs, and so on, for she has made lovely pictures of them.”

“. . . This is no “hand-camera” or “snap-shot” work, but that of a thoughtful, artistic photographer, able to tackle pictures of a good size, and to make them well. . . . The pictures must be on whole-size plates, and they are, every one, technically excellent.”– Wilson’s Photographic Magazine 30, no. 434 (February 1893).

Born Mary Ann McCune, Bartlett married the chemist N. Gray Bartlett (1840-1917) and together they had four children: Greyson, Bertha Madelon, Allyn, and John. It’s Madelon [seen above] who poses for the frontispiece of “Old Friends” dressed up as Mother Goose with a camera and the verse:
A Curtsy
From many a year of sweet repose,
From work of earlier days,
With youth renewed, I’m roused again
By photographic craze.
With shutter, camera and stop,
And trappings not a few,
I’ve ventured forth, my skill to test,
On faces bright and new.
1892 Mother Goose 1719 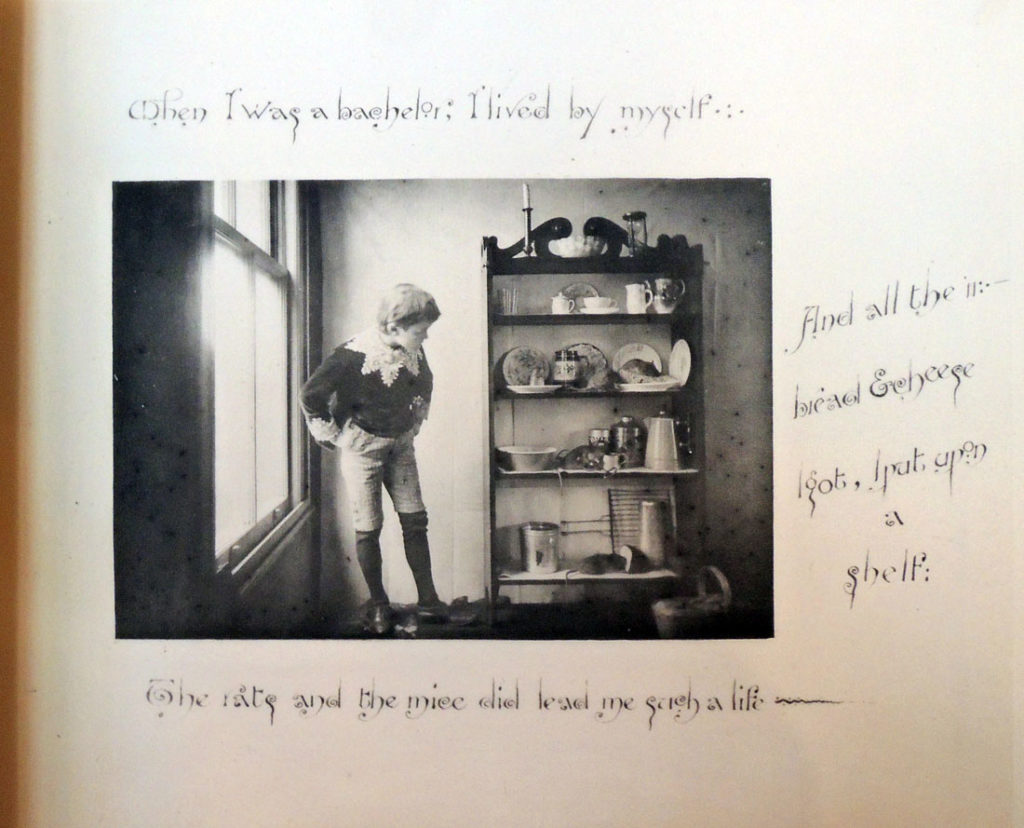 Both husband and wife became active in the Chicago photography scene, but it was Mrs. Bartlett who rose to prominence among the amateur practitioners. Posing her children and neighbors in the backyard of their stately red brick home at 44 Ray Street, Bartlett took first prize for platinotypes at the Art Institute of Chicago’s 1888 exhibit. By 1890, she is named Director of the Camera Club of Chicago and illustrating stories in St. Nicolas, Outings, Scribner’s, and other national magazines. 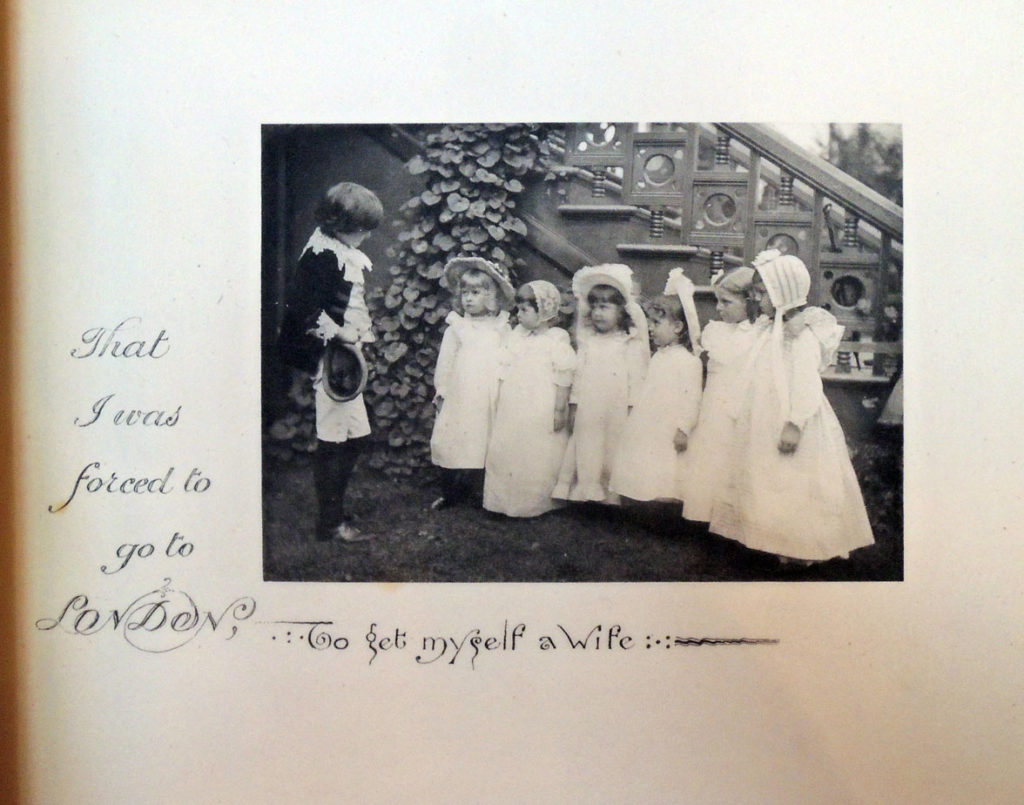 In 1893, when the World’s Columbian Exposition came to Chicago, Bartlett was appointed chairman of the committee of the woman’s department of photography for the world’s congress auxiliary. She prepared a second book with Knight, Mother Goose of ’93, to be exhibited and sold in the Woman’s building, the Children’s building and the State of Illinois building. 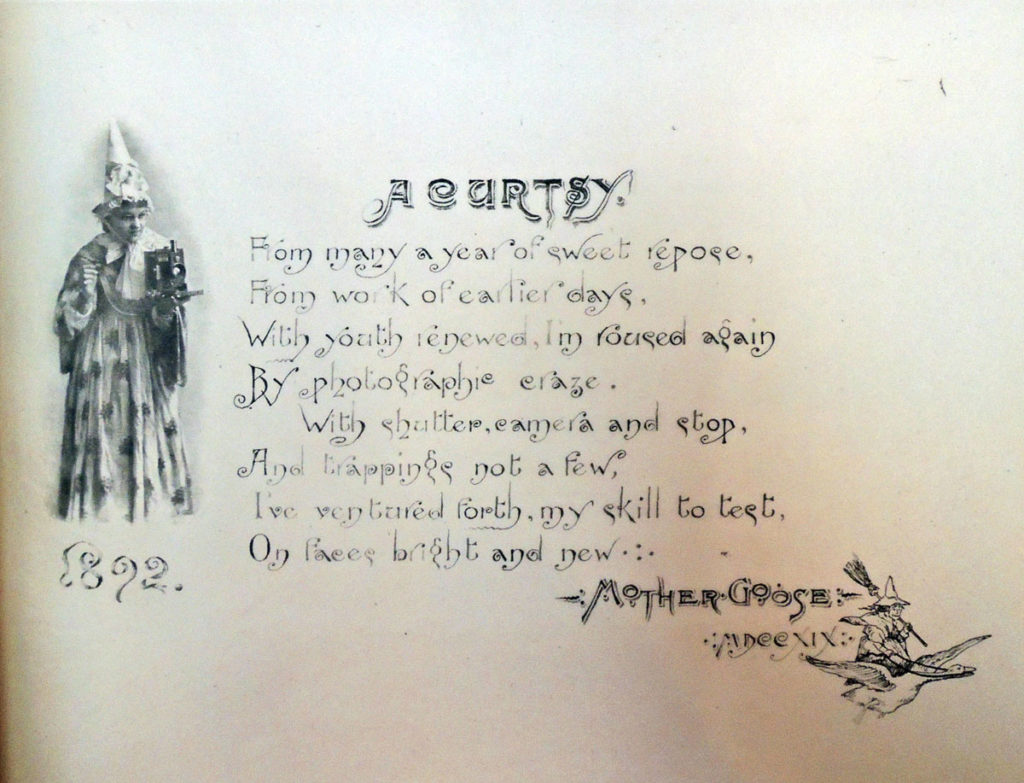 She produced only one more book with Knight and the writer Marian L. Wyatt, called A Girl I Know. The entire narrative centers around her daughter Madelon, now a teenager.

William Cullen Bryant, An Autumn Pastoral, the Death of the Flowers. With 15 illustrations by the Photogravure Co. after original drawings by C.E. Philips (Boston: Nims & Knight, 1888). 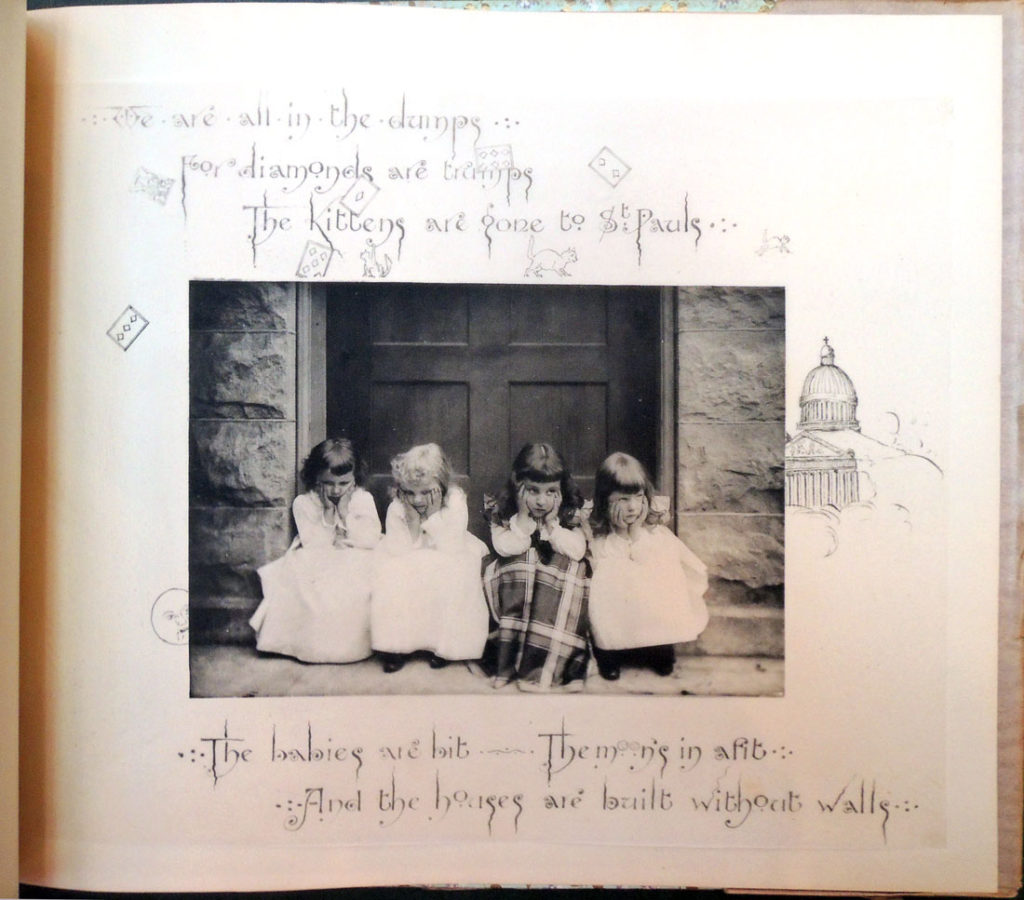