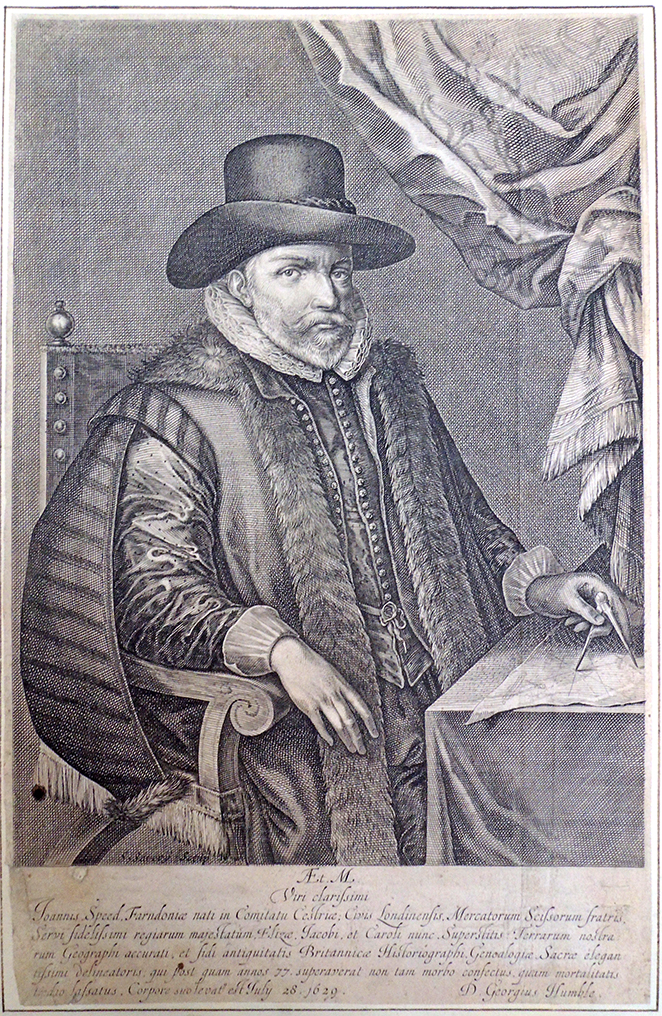 This is a confirmed portrait from the Graphic Arts Collection of the Dutch historian and cartographer John Speed (1594-1678), who biographers often compliment as “having had twelve sons, and six daughters, by one wife.”– James Granger, A Biographical History of England, from Egbert the Great to the Revolution … (J. Rivington and Sons, 1804). 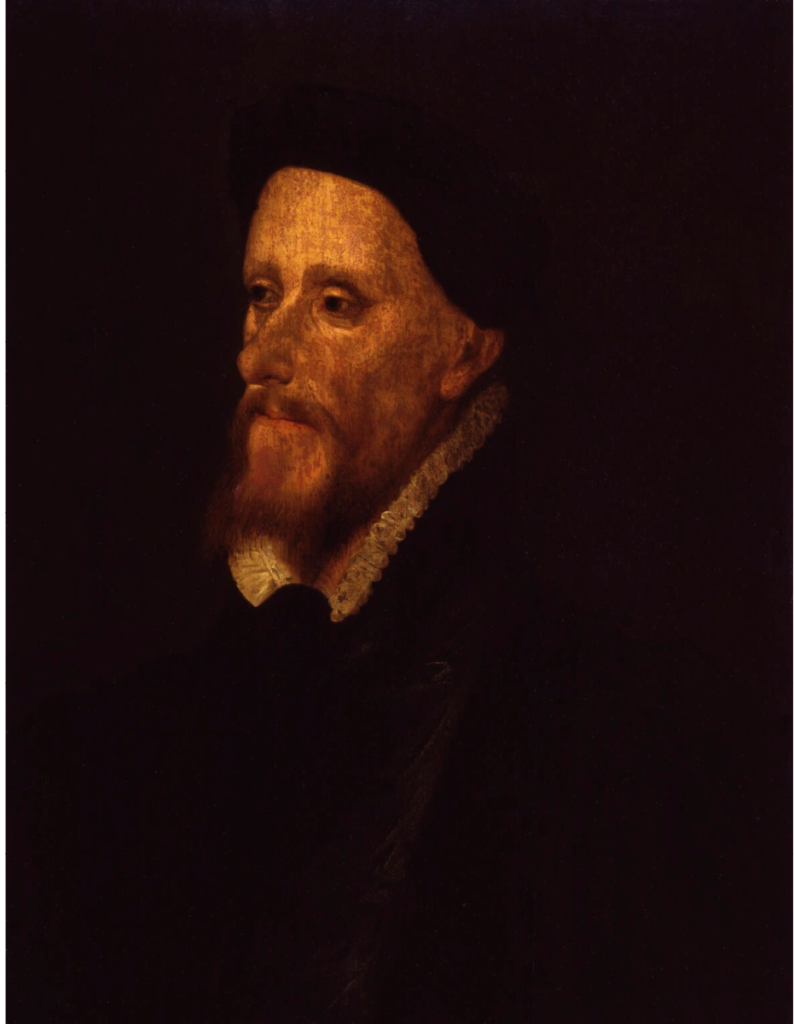 How many other portraits are now “formerly known as”? 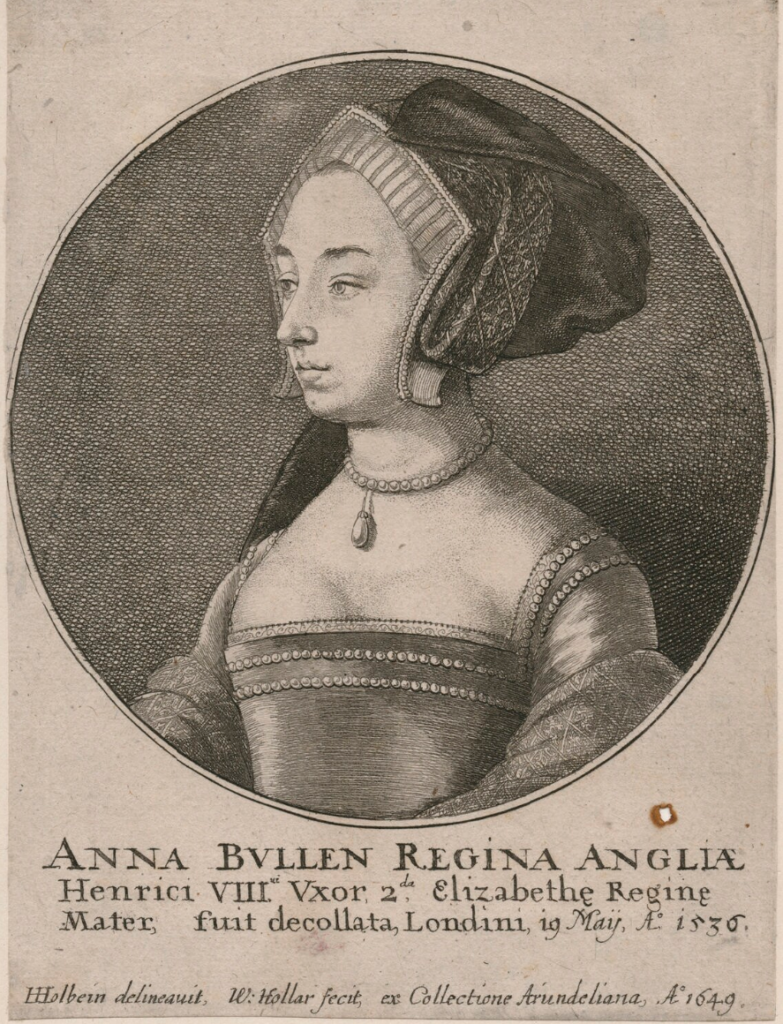 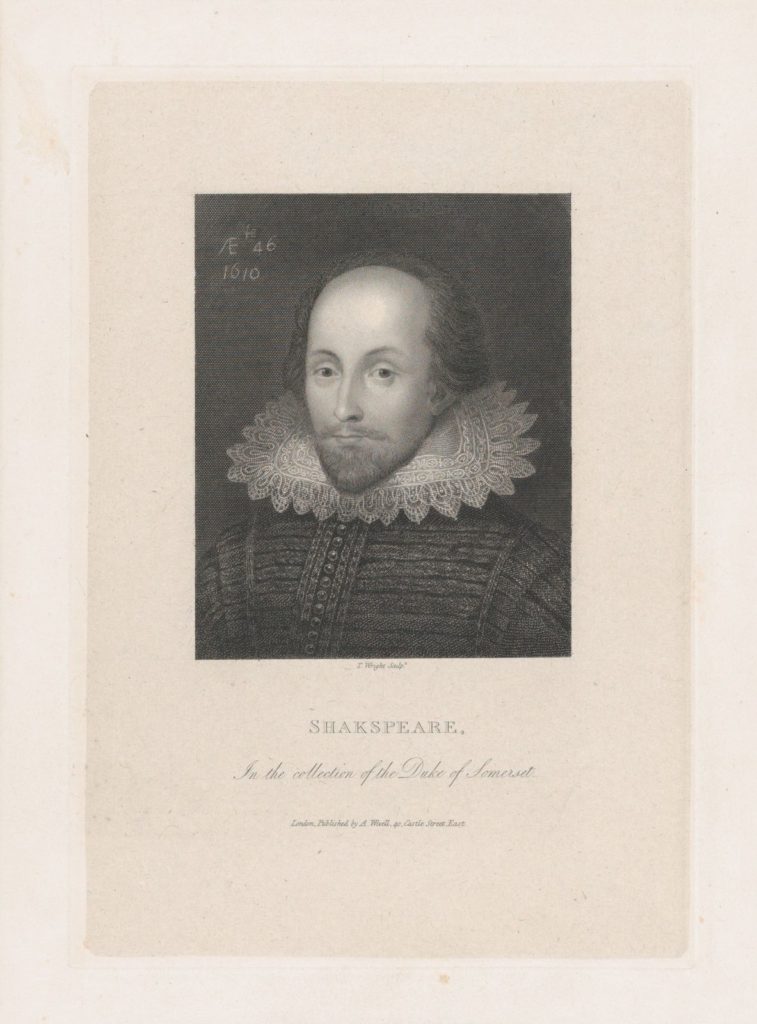 “…based on a painting then attributed to Cornelius Johnson (or Janssen), owned by Charles Jennens and believed to represent Shakespeare at the age of forty. That worked passed from Jennens, to the Duke of Hamilton, Duke of Somerset, then Lady Ramsden at Bulstrode Park, near Reading, before entering the Folger Shakespeare Library in Washington DC. Today, the “Janssen Portrait” it is no longer believed to portray Shakespeare and has been retitled “Portrait of an Unknown Gentleman, possibly Thomas Overbury” (see also 17.3.756-1714).”

“…In his most recent Publicity series, the artist created Duchampian “assisted readymades” by obsessively collecting 8 x 10-inch glossy promotional photographs of show business personalities-in this example, Barbra Streisand, Prince, Sid Vicious, and Sylvester Stallone. Interspersing “authentic” autographs from celebrities (or usually their assistants) with those forged by the artist himself, Prince [not the artist formerly known as Prince] makes explicit the issues of authorship and appropriation that he has explored throughout his career, by demonstrating that the meanings of images are determined primarily by the unruly desires of the viewer.”.

More on our engraving: 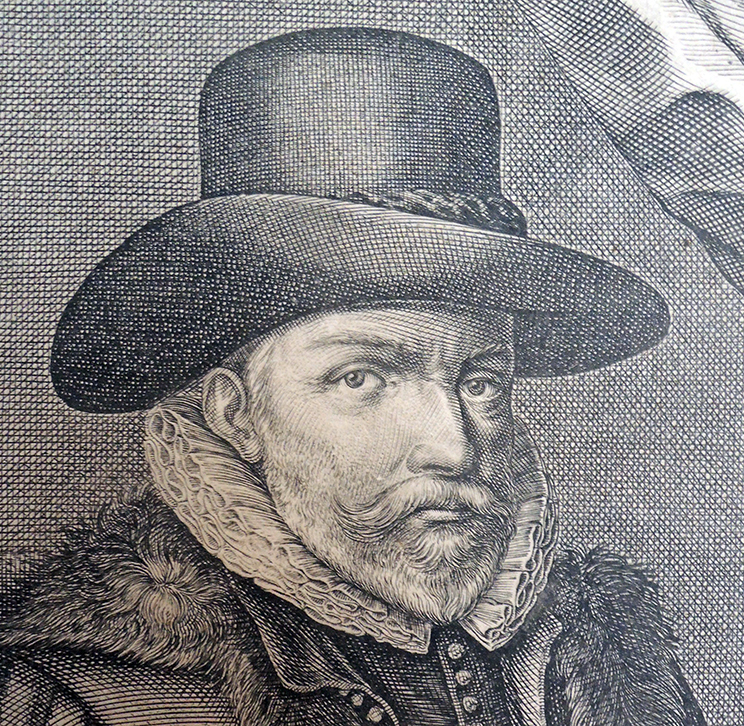 Salomon Savery (1594-1678), John Speed, ca. 1631. Engraving. Also used as a frontispiece to Speed’s Prospect of the Most Famous Parts of the World and History of Great British Isles Atlas, Theatre of the Empire of Great Britaine as well as the combined editions of the two atlases. Hollstein D.24.62 (No. 133). Graphic Arts Collection Dutch prints

The DNB lists John Speed (1552?-1629) as historian and cartographer and continues: “…On 15 June 1598, on Greville’s recommendation, Queen Elizabeth gave Speed ‘a waiter’s room in the custom-house’ … Speed first used his leisure in making maps of the counties of England. … These, accompanied by a description of each map, were collected in 1611 in Speed’s Theatre of the Empire of Great Britaine, for which George Humble, the publisher, had received a license three vears before…. A second edition appeared in 1614, and a third in 1627, with the title A Prospect of the most Famous Parts of the World. …Meanwhile Speed had become a member of the Society of Antiquaries, where he met Camden, Cotton, and other scholars. Encouraged by their help, he had commenced his great work The History of Great Britaine under the Conquests of ye Bomans, Saxons, Danes, and Normans . . . . An anonymous portrait of Speed was in 1879 transferred from the British Museum to the National Portrait Gallery, London. An engraving by G. Savery, from a painting belonging to Speed’s grandson Samuel, is prefixed to the later editions of most of Speed’s works.”

James Granger, A Biographical History of England, from Egbert the Great to the Revolution: Consisting of Characters Disposed in Different Classes… (J. Rivington and Sons, 1804), p. 320 below: 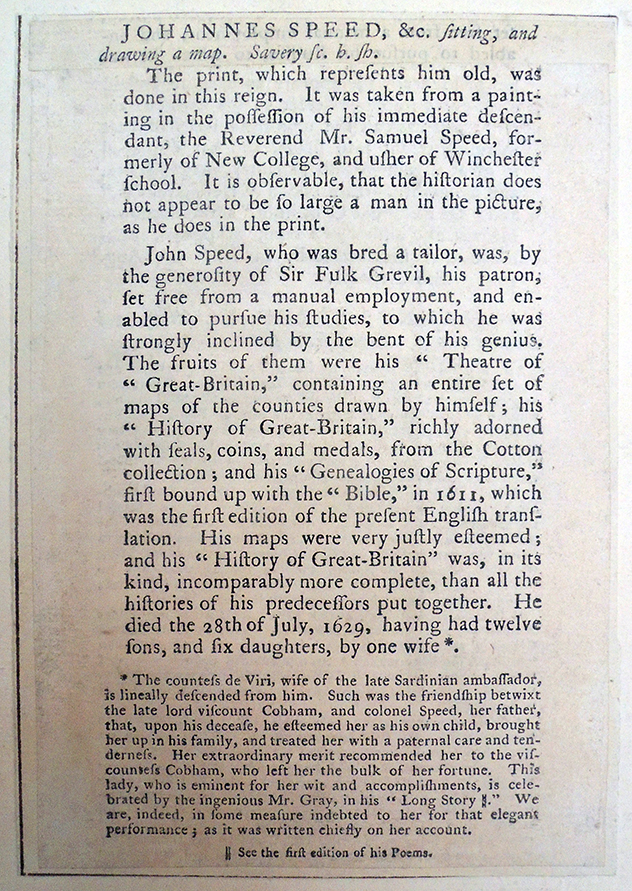